Military Robots Market Size is Expected to Reach at USD 32.7 Billion by 2030, Registering a CAGR of 7.5%, Owing to Increasing Demand for Unmanned Systems in Military Operations

The military robots market is expected to grow rapidly in the coming years, driven by advances in technology and increased demand for unmanned systems in military operations. These robots can be used for a variety of tasks, such as reconnaissance, surveillance, and target acquisition, as well as for explosive ordnance disposal and mine clearance. The use of military robots can also reduce the risk to human soldiers and improve the efficiency of military operations. However, the development and use of military robots also raise ethical and legal concerns, such as issues of accountability and the potential for autonomous weapons. Overall, the military robots market is expected to be a key area of growth and investment in the defense industry in the coming years. 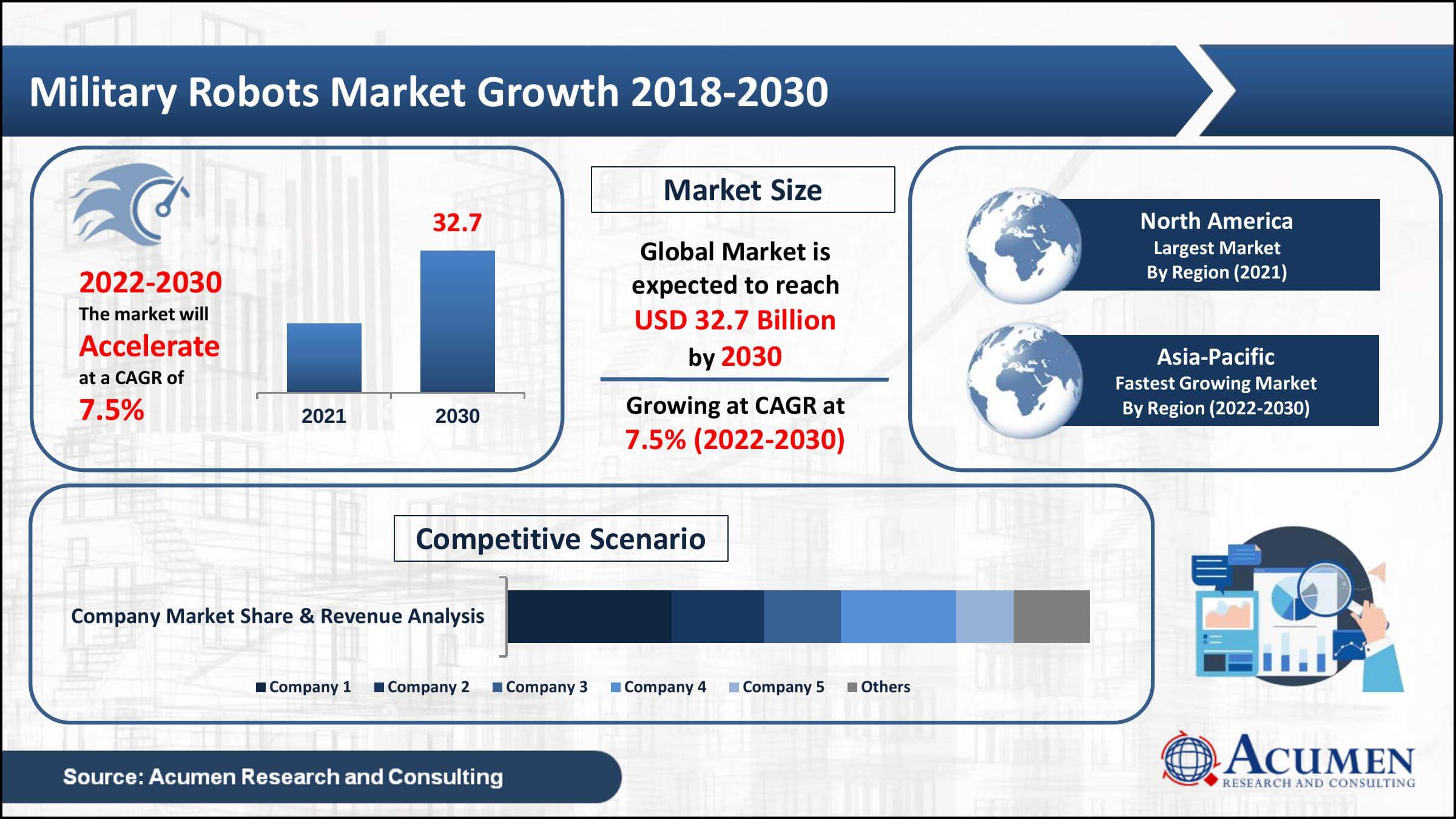 Request for a sample of this premium research report@ https://www.acumenresearchandconsulting.com/request-sample/2490

The increasing use of unmanned aerial vehicles (UAVs) in military operations is a major factor driving the market for military robots. UAVs can be used for a variety of tasks, including reconnaissance, surveillance, and attack missions, and can operate in environments that are too dangerous for human soldiers. Additionally, the increasing use of unmanned ground vehicles (UGVs) in military operations is also driving the military robots market growth. UGVs can be used for tasks such as disposing of explosive devices and conducting reconnaissance missions.

The increasing adoption of robotic technology in the military sector is also driving market growth. Robotics technology is being used to develop advanced military robots that can perform a wide range of tasks with greater precision and efficiency than human soldiers. However, there are also some hindering factors to the growth of the military robots market such as the high cost of development and maintenance, lack of skilled personnel, and ethical concerns.

Acumen Research and Consulting has segmented the global military robots market by mode of operation, propulsion, platform, and application.

Besides that, Asia-Pacific is also a significant market for military robots, with countries such as China, Japan, and South Korea being major contributors to the market growth. The high demand for military robots in the region is driven by factors such as the increasing use of unmanned systems in military operations, the adoption of advanced technology, and the increasing military expenditure by countries in the region.

Receive our personalized services and customization by clicking here https://www.acumenresearchandconsulting.com/request-customization/2490