The Global Military Robots Market Size accounted for USD 17.1 Billion in 2021 and is estimated to garner a market size of USD 32.7 Billion by 2030 rising at a CAGR of 7.5% from 2022 to 2030. Increasing cases of lymphomas is the primary factors boosting the global military robots market value. In addition, the rising involvement of key players in the R&D leading to prominent pipeline of products is a major trend in the military robots market. 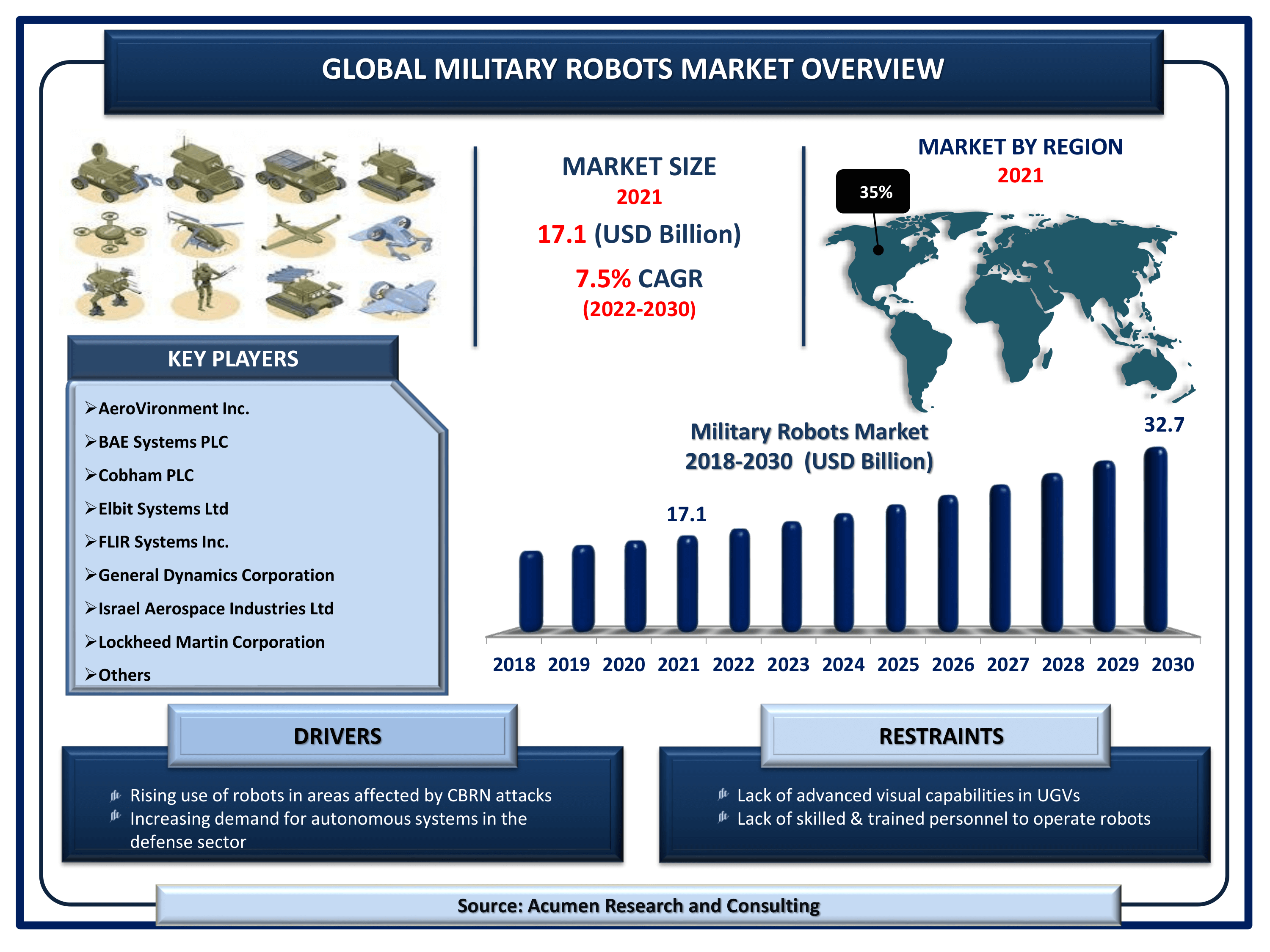 Military robots are particularly designed for use in military applications; from transport to search & rescue and attack. Some of the systems are already in use, whereas many are under the research and development phase. These robots are usually employed within integrated systems that include video screens, sensors, grippers, and cameras. These are designed in different shapes and sizes as per the purpose. Military robots are designed with the purpose to monitor, destroy property, and killing people.

The increasing defense spending due to territorial conflicts between countries, subsequently increasing warfare at country borders are driving the market growth. The increasing deployment of robots for dangerous and hazardous missions in order to decrease human casualties is another factor boosting the demand for military robots across the countries. The rapid growth in the procurement of military robots for targeting, advanced monitoring, and common Interrupt Service Routine (ISR) functions among others is further boosting the market value. The increasing investment by the major countries in the development of advanced robot soldiers and AI-based unmanned ground, sea, and airborne vehicles are further expected to drive growth over the estimated period from 2022 to 2030.

On the other hand, high operational costs of autonomous underwater vehicle (AUVs) and low reliability of unmanned underwater vehicles (UUVs) is likely to restrict the growth over the forecast period from 2022 to 2030.

The worldwide military robots market is split based on platform, mode of operation, propulsion, application, and geography.

According to our military robots industry analysis, land military robots accounted for over 55% of the total market share in 2021 and are likely to do so in the coming years. In 2021, airborne-based military robots also dominated the market with a significant revenue share (%). The availability of airborne robots includes small UAVs, tactical UAVs, strategic UAVs, and unmanned combat aerial vehicles (UCAVs). These are used for intelligence, surveillance, and reconnaissance (ISR), search and rescue, and to combat support. Additionally, these robots are designed with the installment of payloads, sensors, navigation systems, communication systems, propulsion systems, and power systems among others.

Based on the mode of operations segment, it is anticipated that human operated will be dominant and hold a sizable market share in the forecast period. Our military robots market forecast predicts that due to the development of robotics technology, autonomous mode of operation will experience significant growth in the upcoming years.

In 2021, mechanical robots would generate a significant industry share in the military bots market. These robots are commonly used for long-range ground-based operations and are known as command control robots. Engines, thrusters, and other transmissions propel these robots. These robots navigate and communicate using a global positioning system (GPS) and 3G technology. On the other hand, electric propulsion sub-segment is anticipated to record the fastest growth rate in the comign years.

Based on application segment, combat support is expected to lead the market with majority of the share during the forecast period 2022 to 2030. Robotics technology for military applications is not new; it has long been utilized by armed forces across the world. Military robots can perform a wide range of combat tasks, including lethal combat operations, explosive disarmament, fire support, rescue, reconnaissance, logistics support, and more.

North America, along with its major economy (the US), is dominating the military robots market with maximum revenue share (%). The increasing investment in research and development activities in order to develop more advanced robots that can beat the limitations of existing ones is supporting the regional market value. The US military and law enforcement agencies are using these robots in various applications, including search and rescue operations, border security, crowd monitoring and control, and surveillance among others. The early adoption of advanced systems in the region is further supporting the regional market value. For instance, the US Mechatronics has developed a working automated sentry gun and is further developing its usage for commercial and military use.

The prominent economies of Asia Pacific including China and India are majorly contributing to the fastest growth of the region. The increasing military and defense budget in the aforementioned countries is additionally supporting the regional market value. China's People's Liberation Army (PLA) has released footage of new and high-tech weapons & equipment in 2020 that notably include robot-Esque exoskeleton suit. The Chinese PLA has also inducted tiny missile-loading ground robots in 2020 that are armed with a machine gun, which can overcome the problem of human assistance when loading missiles.

What is the size of global military robots market in 2021?

The market size of military robots market in 2021 was accounted to be USD 17.1 Billion.

What is the CAGR of global military robots market during forecast period of 2022 to 2030?

Which region held the dominating position in the global military robots market?

North America held the dominating military robots during the analysis period of 2022 to 2030.

Asia-Pacific region exhibited fastest growing CAGR for military robots during the analysis period of 2022 to 2030.

What are the current trends and dynamics in the global military robots market?

Increasing demand for autonomous systems in the defense sector, rising use of robots in areas affected by CBRN attacks, and growing adoption of UGVs for counter-insurgency operations drives the growth of global military robots market.

Based on platform, land segment is expected to hold the maximum share military robots market.