The Global Lymphoma Treatment Market Size accounted for USD 7.7 Billion in 2021 and is estimated to garner a market size of USD 15.8 Billion by 2030 rising at a CAGR of 8.4% from 2022 to 2030. Increasing cases of lymphomas is the primary factors boosting the global lymphoma treatment market value. In addition, the rising involvement of key players in the R&D leading to prominent pipeline of products is a major trend in the lymphoma treatment market. 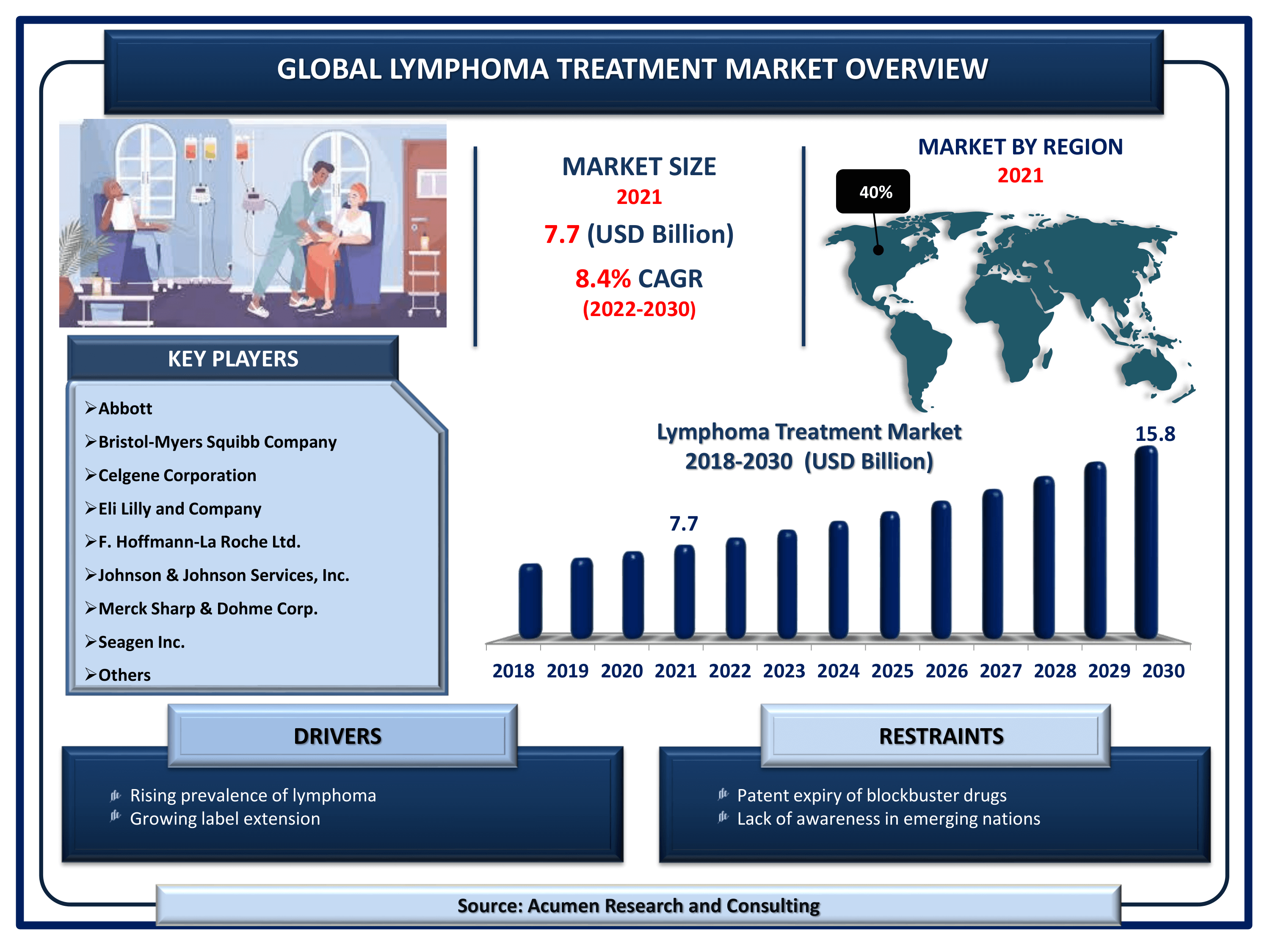 Lymphoma is a type of cancer that can affect the bone marrow, the blood cells, the lymph nodes, and other parts of the lymphatic system. According to the estimates released by the Leukemia & Lymphoma Society® (LLS) approx. every 3 minutes one person in the US is diagnosed with blood cancer. Additionally, an estimated combined total of 178,520 people in the US were diagnosed with lymphoma in 2020. New cases of lymphoma were recorded with 9.9% of the estimated 1,806,590 new cancer cases diagnosed in the US in 2020. An estimated 1,297,027 people in the US are either living with or are in remission from lymphoma. Between 2000 and 2017, approx. 40% of cancer-fighting therapies were approved by the FDA to treat blood cancer patients and help patients with a certain type of treatment. Rituxan® was first approved to treat lymphoma patients and is now approved to treat patients with rheumatoid arthritis and other autoimmune diseases.

Currently, Celgene Corporation has sponsored three drugs namely, “Fludarabine”, “Cyclophosphamide”, and “JCAR017” for the treatment of Lymphoma in Non-Hodgkin patients. All three drugs are under clinical trials in phase 2. The actual start date for the preliminary examination was July 2020 and the estimated completion date is April 2024. Moreover, Genmab A/S in collaboration with AbbVie has sponsored a drug name “Epcoritamab”. It can be used for the treatment of Diffuse Large B-cell Lymphoma, Primary Mediastinal.

According to the statistics released by the Leukemia & Lymphoma Society® (LLS), it is estimated that 791.550 people living with, or in remission form of lymphoma in the US. 146,789 people are living with or in remission from Hodgkin lymphoma. Also, 644,761 people are living with or in remission from non-Hodgkin lymphoma. In February 2021, Food and Drug Administration (FDA), approved “lisocabtagene maraleucel” manufactured by Breyanzi, Juno Therapeutics, Inc. It is used as a treatment for adult patients with relapsed or refractory (R/R) large B-cell lymphoma after two or more lines of systemic therapy, involving diffuse large B-cell lymphoma (DLBCL). Moreover, FDA approved “crizotinib” manufactured by the XALKORI®, a registered trademark of Pfizer Inc. for pediatric patients with 1 year of age and older and young adults with relapsed or refractory, systemic anaplastic large cell lymphoma (ALCL) that is ALK-positive. Governing bodies like Alzheimer’s Association for the affordable diagnostic test will boost the growth of lymphoma therapeutics market.

According to the American Cancer Society, targeted therapies have grabbed significant attention for the treatment of lymphoma. As researchers have learned about lymphoma cells, it has enhanced the development of newer drugs that target specific parts of the lymphoma cells. These targeted drugs are different from the standard chemotherapy drugs that work by attacking rapidly growing cells. Some targeted drugs are ibrutinib (Imbruvica), acalabrutinib (Calquence), and idelalisib (Zydelig). These drugs are already used for some types of NHL and there is an ongoing study related to being used against other types.

Moving Genomics to the Clinics

In the current scenario, scientists are making a lot of progress in understanding the changes in DNA inside the normal lymphocytes that can cause the development of lymphoma cells. One such technique is stem cell transplant. Autologous transplants (which use the patient's stem cells rather than cells from a donor) have the risk of reintroducing lymphoma cells back into the patient after treatment. However, researchers are testing new and improved methods to separate the last traces of lymphoma cells from the stem cells before they are returned to the patient. Some of the new monoclonal antibodies developed for treating lymphoma may assist in removing these remaining cells.

Apart from that, researchers are also conducting studies on the effectiveness of non-myeloablative (reduced-intensity) stem cell transplants in people with lymphoma. Another technique is chimeric antigen receptor (CAR) T-cell therapy. In this treatment, immune cells called the T-cells are removed from the patient's blood and altered in the lab to specific receptors (called chimeric antigen receptors, or CARs) on their surface. These receptors can be attached to proteins on the surface of lymphoma cells and launch a precise immune attack against them. Such CAR T-cell therapy approved are Axicabtagene ciloleucel (Yescarta), Tisagenlecleucel (Kymriah), Lisocabtagene maraleucel (Breyanzi, also known as list-cel), and Brexucabtagene autoleucel (Tecartus).

The worldwide lymphoma treatment market is split based on type, application, and geography.

According to our lymphoma treatment industry analysis, NHL type will hold the largest market share in the forecast period. This is attributed to presence of established drugs such as Revlimid, Rituxan, and Imbruvica. These drugs are some of the biggest revenue generating oncology drugs contributing lymphoma treatment market.

On the other hand, based on drugs segment, Revlimid will be dominating segment and it is anticipated that it will hold a significant market share in the forecast period. According to our lymphoma treatment market forecast, Revlimid sales have climbed all-time high market share it is preferable as first line of prescribed drug treatment for the duration of cancer treatments.

Based on regions, North America dominates the lymphoma treatment market. This is well supported by the presence of dominating players, new drug innovations coupled with availability of new drugs, well-established healthcare infrastructure, and high R&D expenditure. Asia-Pacific is projected to witness the fastest growth in the forecast period by recording a remarkable CAGR of nearly 10.8%. Rising healthcare expenditure, increased unmet medical needs, rising awareness regarding treatment options, and availability of effective treatment in emerging economies such as China & South Korea.

What is the size of global lymphoma treatment market in 2021?

The market size of lymphoma treatment market in 2021 was accounted to be USD 7.7 Billion.

What is the CAGR of global lymphoma treatment market during forecast period of 2022 to 2030?

The projected CAGR of lymphoma treatment market during the analysis period of 2022 to 2030 is 8.4%.

Which region held the dominating position in the global lymphoma treatment market?

North America held the dominating lymphoma treatment during the analysis period of 2022 to 2030.

Asia-Pacific region exhibited fastest growing CAGR for lymphoma treatment during the analysis period of 2022 to 2030.

What are the current trends and dynamics in the global lymphoma treatment market?