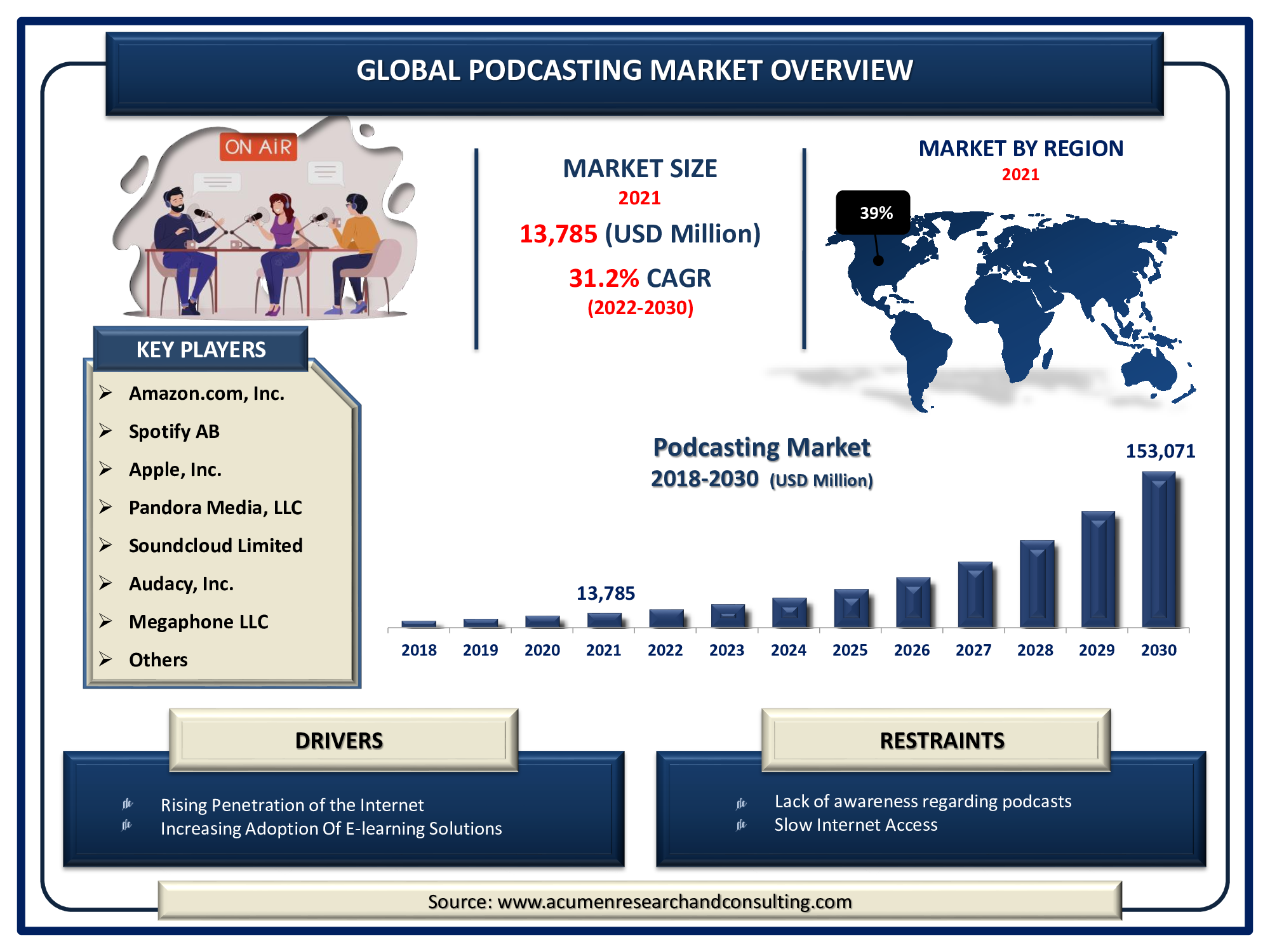 The increasing popularity of podcasting and the widespread availability of audio-on-demand technologies are the primary drivers of the podcasting market's growth. According to a podcasting industry analysis, the global market will be driven by the constant demand for low entry barriers for producers as well as expanding consumer desires for informational streaming channels, with podcasts being listened to while walking, gardening, cleaning, traveling, or exercising.

Podcasting is the creation and distribution of digital audio files to users' computers or smart devices via RSS (Real Simple Syndication) feeds. These tracks are transmitted to streaming networks, where users may listen to them on mobile phones, digital music players, and interactive media players like the iPod. In the last few years, it has become one of the most popular ways to consume audio material on the internet. According to an IVM Podcasts listener survey, approximately 96 % listened in via their smartphones, and they noticed more women than ever before listening to podcasts. 80% of listeners prefer longer episodes of more than 20 minutes, and serious listeners average 7-8 hours of listening to a week. It is now only medium with a regular engagement of more than half an hour and considerably greater completion rates as compared to most kinds of OTT content. Over the last year, podcasting has evolved as a very profitable and sustainable marketing and promotional platform for small brands, huge corporations, and entrepreneurs seeking to expand their reach.

Podcasting, often known as radio on demand, is a digital broadcasting program in which consumers can listen to or stream digital content by signing up for a subscription or downloading it as a file to a playback device. The ongoing technical advancement, expanding entertainment sector, and ability to listen to podcasts while completing day-to-day tasks are fueling the podcasting market growth. Furthermore, during the COVID-19 Pandemic, podcasting was often used in education and instructional learning since it allowed for the easy delivery of audio educational content. Since about two decades ago, audio radio broadcast information and media have been widely accessible. Historically, audio content was only available on music players, smartphones, and iPods, with big radio, and shows streaming on podcasts. Traditional technology with limited features prevents cell phone users from accessing podcast content. However, in the last five years, the distinct technique of podcasting has grown in popularity. Advances in smart Bluetooth speakers, tablets, smartphones, and laptop computers have supported the expansion of the podcasting market size.

Additionally, the expansion of OTT platforms has created a worldwide need for localized content, propelling the podcasting market trends even further. As the world becomes more connected, the language services business is expected to grow fast, increasing the demand for localized content. Market participants are getting more aware of the preferences of their customers. As such, with Bollywood being the most popularly listened to and downloads, all forms of music are popular in India, followed by vernacular and regional musicals.

The global podcasting market segmentation based on the genre, format and geographical region. 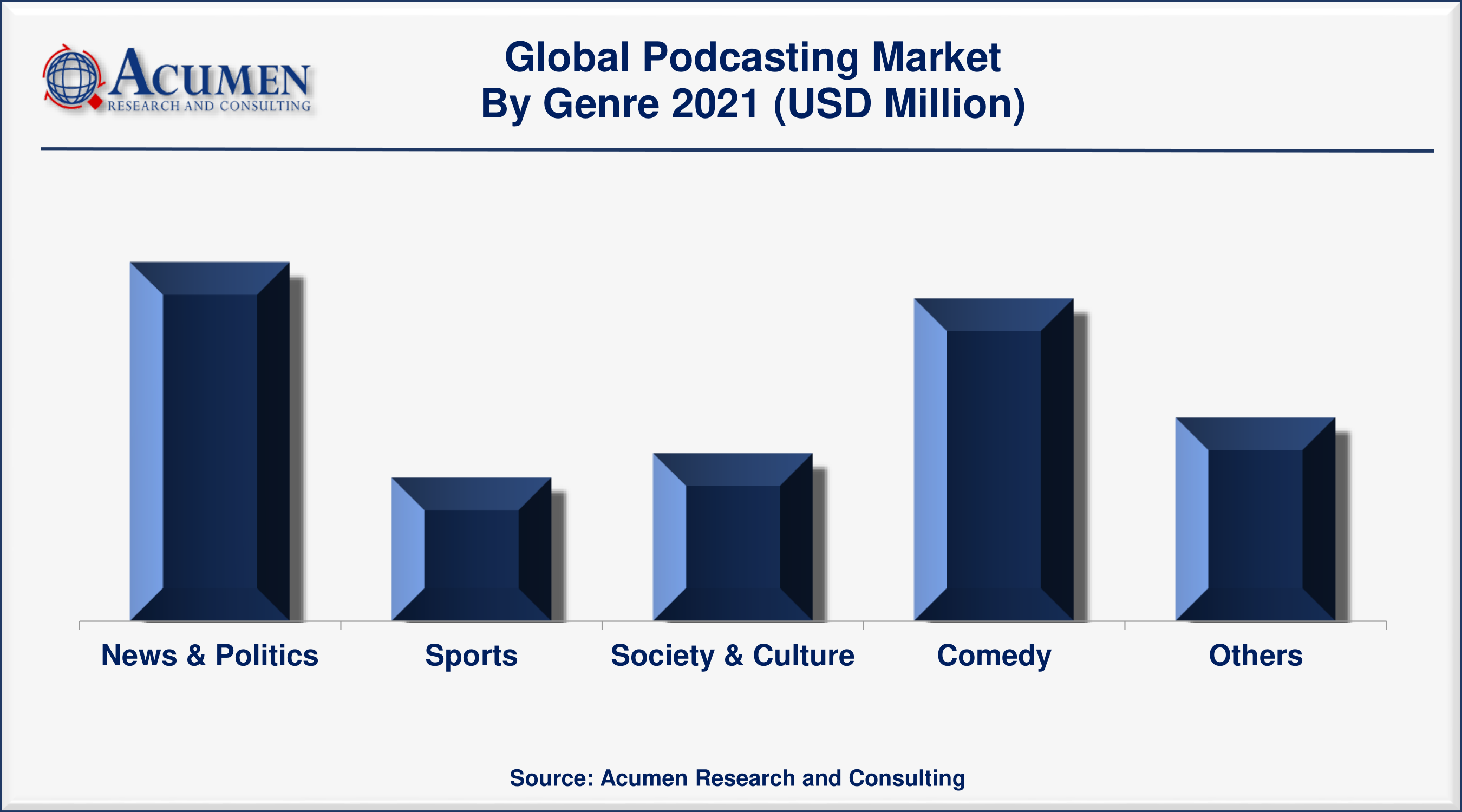 Based on the genre, the news and politics segment is estimated to lead the global podcasting market in 2021. This surge can be linked to workaholics' increasing demands for fast-paced news as a result of today's rigorous lifestyle. The news and politics genre is popular in a number of formats, including panel debates, single news bulletins, and one-on-one interviews. The news and politics sector is rapidly growing in prominence in the global podcasting industry. This is hardly surprising given that the majority of people listen to such podcast categories on a regular basis. Such podcasts typically take the form of a forum or group discussion, or solo news broadcast on current political and regional concerns. News and politics podcasts provide exclusive news on current events to their listeners, which is why they are so popular.

Furthermore, the sports segment is predicted to grow at the fastest rate in the market in the future years, according to the podcasting market projection. This is due to the vast number of sports fans and events that exist all over the world. Sports podcasters keep listeners interested by inviting favorite sports celebrities to talk about current events. 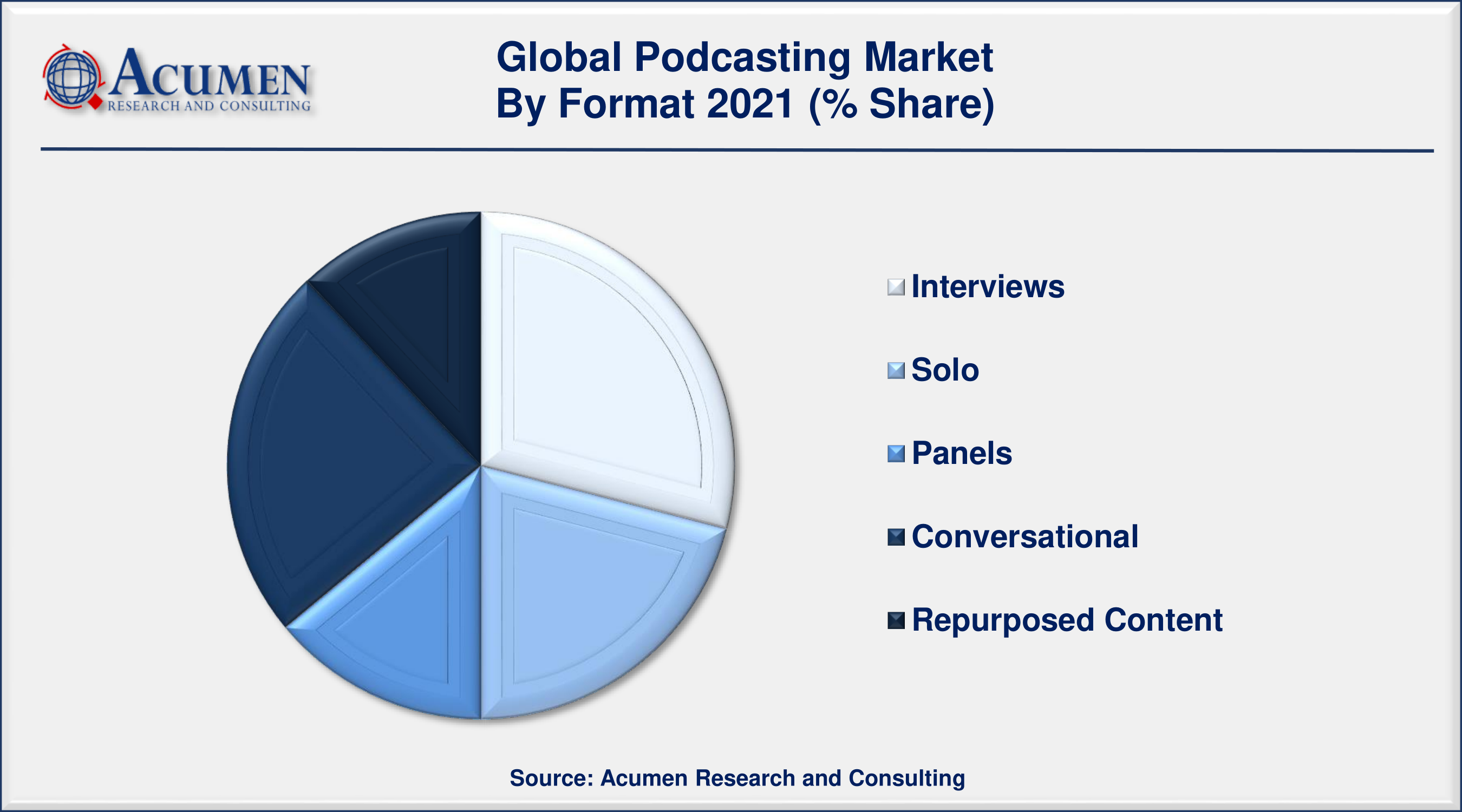 Based on the formats, the solo segment is predicted to rise significantly in the market over the next few years. Solo content is developed by people who are experts in particular fields or who wish to share their own personal content experiences. In the midst of the industry's rush, independent publishers enter the race with these formats, which are simple to use and require only a microphone and basic free editing features. Furthermore, as the enterprise grows, independent creators are stepping into the solo podcasting format because of advantages like simplicity, ease of use, as well as little investment.

North America is expected to lead the global market in 2021. The prominence of the region can be attributed to its rapid adoption of new technology as well as its sophisticated customer base. Content providers are upgrading their ad revenue sources and adapting their platforms to the evolving audio-on-demand podcasting approach. Furthermore, the US will account for a significant share of the overall podcasting market. This could be attributed to the region's initial implementation of cutting-edge technologies, as well as a varied audience of individuals of all ages. Additionally, the Canadian company is growing in terms of audience numbers and engagement.

How much was the global podcasting market size in 2021?

The global podcasting market size in 2021 was accounted to be USD 13,785 Million.

What will be the projected CAGR for global podcasting market during forecast period of 2022 to 2030?

Which region held the dominating position in the global podcasting market?

North America held the dominating share for podcasting during the analysis period of 2022 to 2030.

Asia-Pacific region exhibited fastest growing CAGR for podcasting during the analysis period of 2022 to 2030.

What are the current trends and dynamics in the global podcasting market?

Rising penetration of the internet and smartphone, as well as increasing adoption of e-learning solutions, are the prominent factors that fuel the growth of global podcasting market.

By segment genre, which sub-segment held the maximum share?

Based on genre, news & politics segment held the maximum share for podcasting market in 2021.