The Global 3D Animation Market Size accounted for USD 16,527 Million in 2021 and is estimated to achieve a market size of USD 47,021 Million by 2030 growing at a CAGR of 12.5% from 2022 to 2030. One of the key factors influencing the 3D animation market growth is the widespread adoption of visual effects (VFX) in the media and entertainment industries. Furthermore, the adoption of cloud-based technology by animation content producers is driving the 3D animation market value in the coming years. 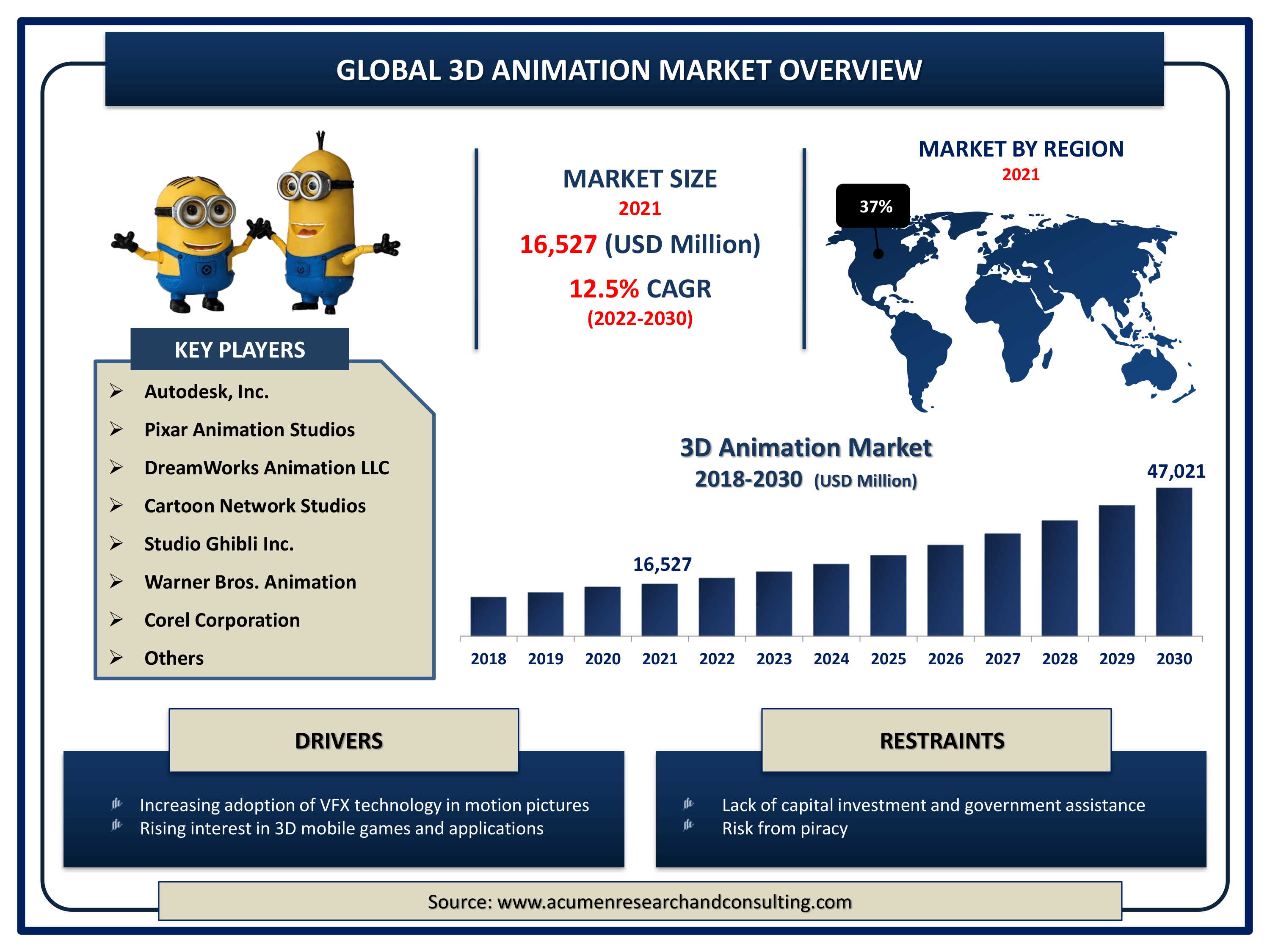 3D animation is the use of motion to bring cartoon characters, props, vehicles, and other objects to life for films, TV shows, and games. 3D animators are heavily involved in several early stages of VFX production to ensure that they deliver the right content for the animation of real models. Because 3D animation is a three-dimensional moving image, animators must go through several stages of modeling, rigging, and animation to create a 3D animation. Furthermore, 3D animation necessitates the meticulous manipulation of 3D models.

Over the years, industrial animation has become a very quick and concise process. For example, if a company wants to do an advertisement for its own business, it will need a service that will showcase its products or a service that provides a clear and concise way to define its business objectives. Furthermore, 3D animation facilitates the simple promotion of organizational products. Apart from that, 3D animation serves as an asset for engaging the audience more through visual showcasing of the specific target market. This also has an effect on the audience, encouraging them to buy the product. Such factors contribute to the global 3D animation market trend across a variety of end-user industries.

One of the most difficult challenges that medical science is currently facing is the development of medical analysis that is simple to access and understand. 3D animations convey more information than two-dimensional illustrations or photographs, pinpointing vital body functions to microscopic pharmacodynamics. To effectively convey information, 3D animation employs high-quality animation, scripts, and scientific references. Today, 3D animation in healthcare is evolving every day with the help of technology and social media influence and support.

As 3D animation possesses huge potential for the animation industry, the governance of animation production (i.e. decisions on the supply chain) is dictated by the institution that controls and decides about the content to be produced and distributed and these two aspects are deeply connected. In the United States, the distribution of animation is primarily controlled by the Fox Network, specialized channels such as Nickelodeon and Cartoon Network, and large distributors/studios or other content providers such as Disney. Because major animated series is carried by TV studios, and these studios are more involved in broadcasting than production, they were heavily involved in outsourcing production studios. Previously Fox Network used to keep some internal pre-production and post-production operations, and even held production internally at times. This is why Fox includes its own creative talent in the conceptualization and pre-production phases, which are then outsourced to animation studios. In contrast, none of the recent 3D films have been heavily outsourced. The reason for this is Pixar's creative production process for 3D technology. Companies like Pixar have built their own tools to develop higher-end animation since the beginning. Furthermore, Pixar licenses its animation tool to others, despite the fact that it accounts for only 4% of its revenue.

The worldwide 3D animation market segmentation is based on the technique type, component, deployment, end-use, and geography. 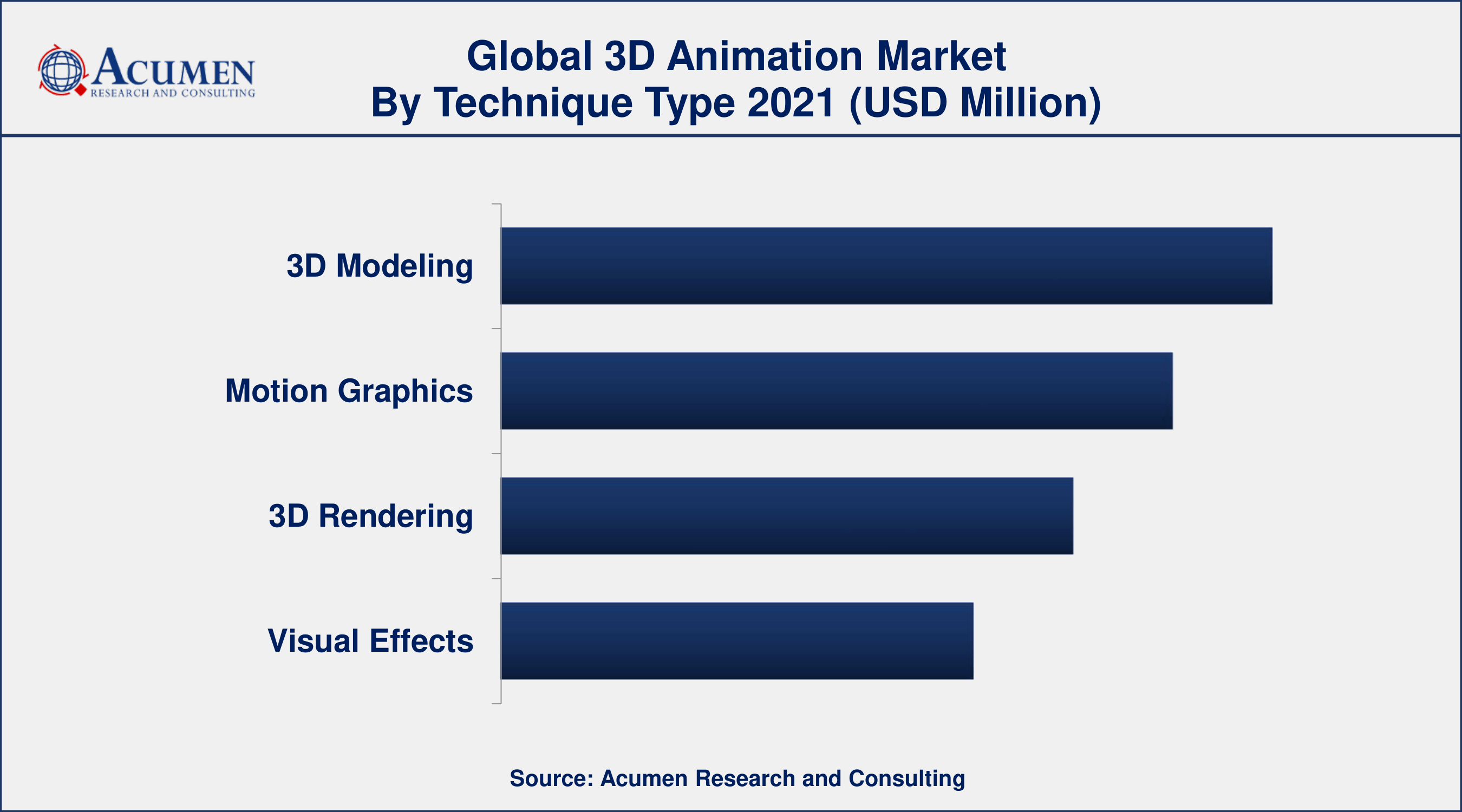 According to the 3D animation industry analysis, the  3D modeling technique segment will dominate the global market. Because 3D modeling creates a digital object that can be fully animated, it is a viable process for character animation and special effects. It is widely used in a variety of mediums such as games, movies, architecture, illustrations, engineering, and computer graphics. Such factors bolster the segmental growth ultimately contributing to the growth of the global 3D animation market. 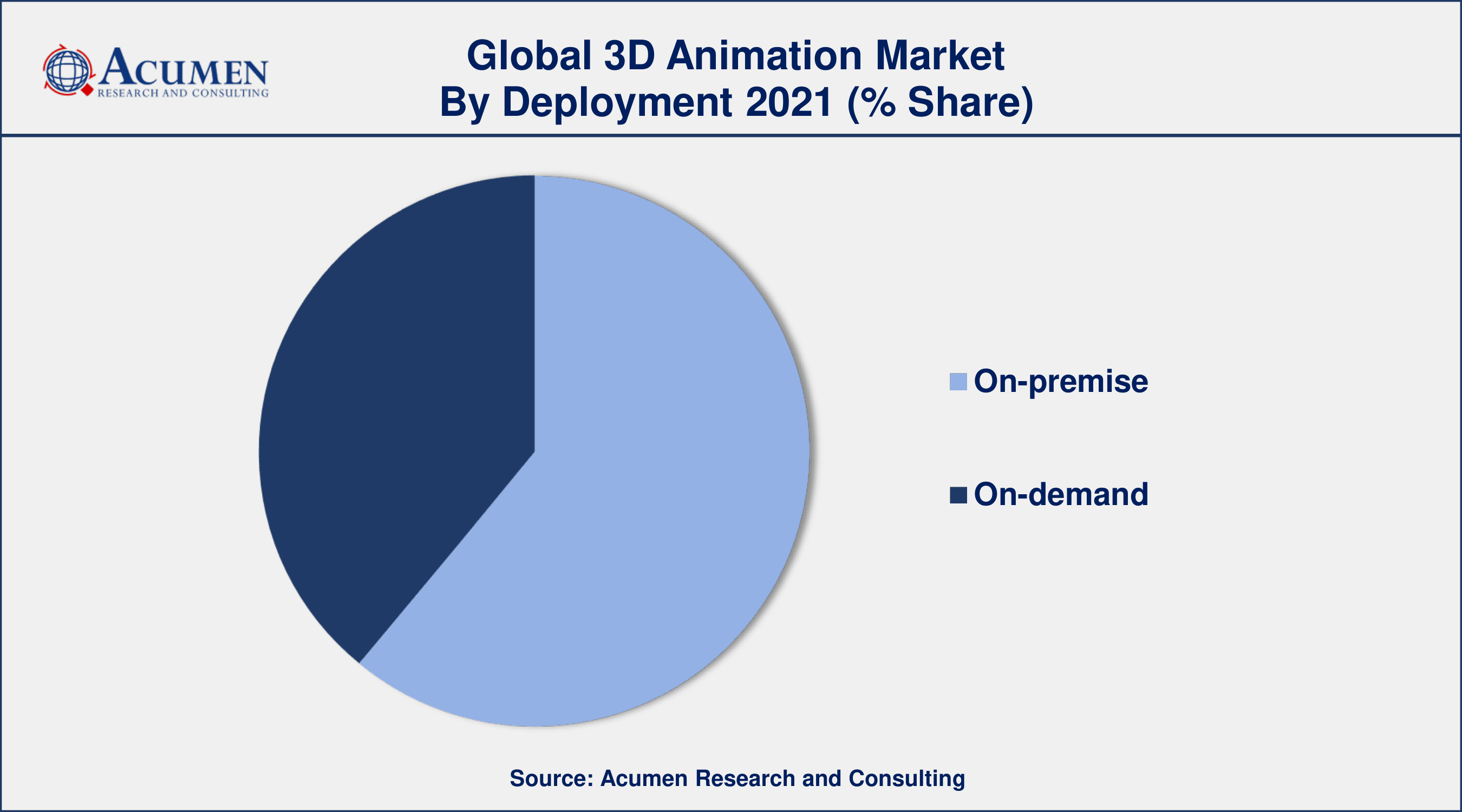 According to the 3D animation market forecast, the on-premise segment has held the bulk of the market share in the past and is likely to do so again throughout the projected timeline. The storage location is determined by the corporation's data or architecture, which enables higher data security and cost savings. Due to these advantages, many large corporations rely on established solutions. The use of AI with 3D animation has simplified the simulation procedure. The entertainment industry's growing acceptance of VFX is projected to drive market growth.

In terms of end-user, the media and entertainment segment accounts for the lion's share of revenue growth in the global 3D animation market. Because 3D animation has grown in popularity in the media and entertainment industries, it will continue to dominate during the forecast period. According to the FICCI-EY report, the ratio of advertising to GDP is expected to reach 0.4% by 2025, growing from 0.38% in 2019. Furthermore, the VFX and Animation industry in Vancouver is comprised of over 100 studios, making it the world's largest cluster of domestic and foreign-owned studios. Aside from that, new job opportunities are opening up in the digital entertainment and interactive media industries. This, in turn, drives the growth of the global 3D animation market.

North America holds the lion's share of the 3D animation industry and will continue to do so during the forecast period. The presence of prominent digital industry players such as Fox, Nickelodeon, and Disney is one of the key factors influencing the market for 3D animation to grow.

Asia-Pacific conversely will grow at the fastest CAGR in the 3D animation market in the forthcoming years. Growth in the media and entertainment industry is one of the key sectors contributing the most to the growth of the Asia-Pacific regional market for 3D animation.

What is the size of global 3D animation market in 2021?

The estimated value of global 3D animation market in 2021 was accounted to be USD 16,527 Million.

What is the CAGR of global 3D animation market during forecast period of 2022 to 2030?

Which region held the dominating position in the global 3D animation market?

North America held the dominating 3D animation during the analysis period of 2022 to 2030.

Asia-Pacific region exhibited fastest growing CAGR for 3D animation during the analysis period of 2022 to 2030.

What are the current trends and dynamics in the global 3D animation market?

By End-Use segment, which sub-segment held the maximum share?

Based on end-use, media & entertainment segment is expected to hold the maximum share 3D animation market.