The Global Air Traffic Control Market Size accounted for USD 9,967 Million in 2021 and is estimated to achieve a market size of USD 15,110 Million by 2030 growing at a CAGR of 4.9% from 2022 to 2030. Rising air passenger traffic will drive the air traffic control market growth. Furthermore, the increasing adoption of machine learning and IoT technologies at airports is boosting the air traffic control market value in the coming years. 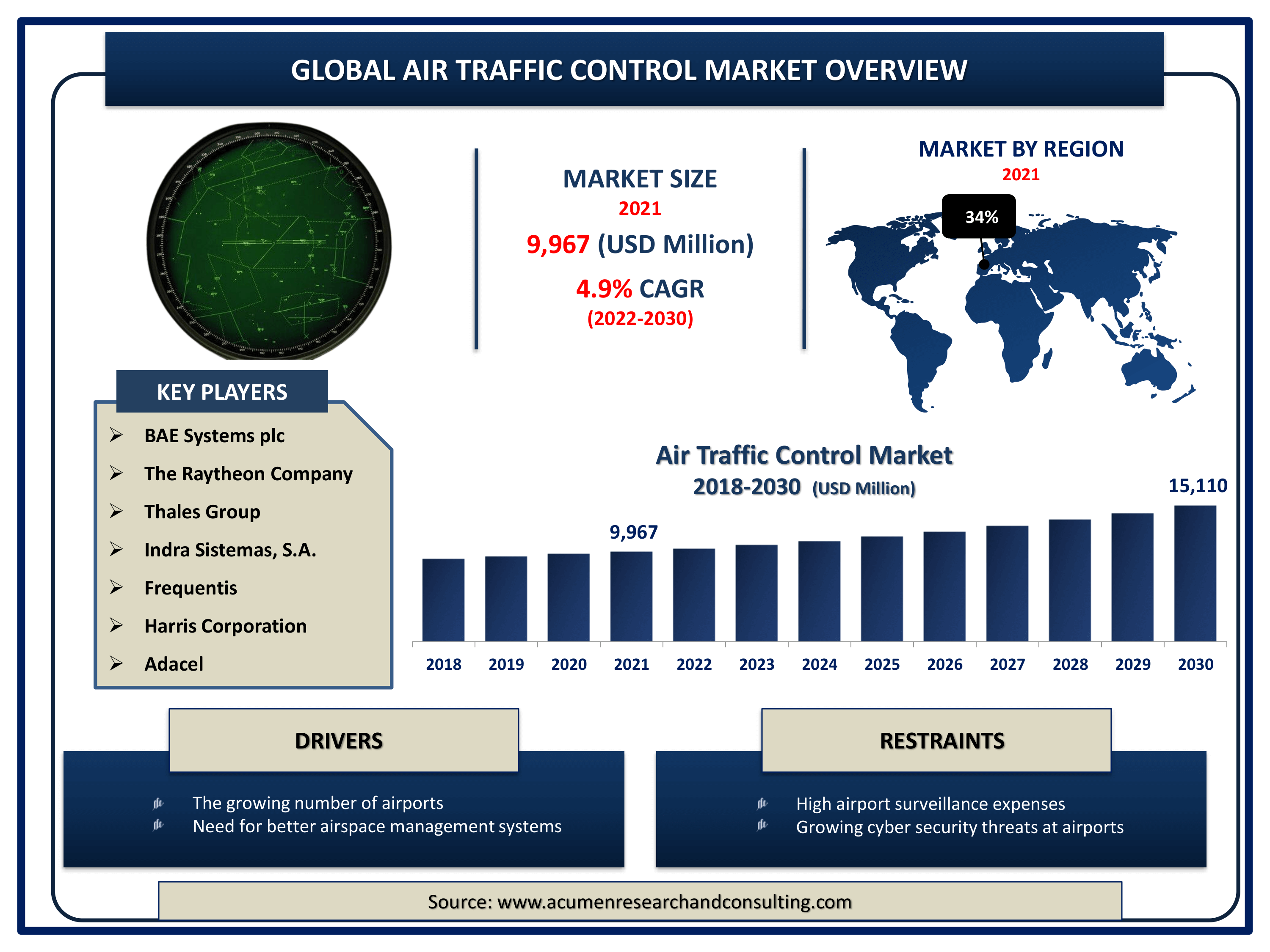 Air traffic control (ATC) is necessary for a safe, efficient, and effective aviation system as it keeps planes effectively separated from one another to prevent collisions, but it also serves to organize the flow of air traffic. Surveillance (confirmation of where planes are), communications (passing data and instructions between pilots and controllers), and navigation are the three essential functions of air traffic control (assisting pilots to direct their plans along safe paths).

Several challenges are putting pressure on the ecosystem, which includes a growing diversity of aerospace users and business models, innovative new technologies that necessitate innovative integrations, aging and possibly cyber-insecure infrastructure, and so on. The National Aerospace System (NAS) predicts that the scope of air traffic control (ATC) will expand exponentially in the coming years, necessitating new training requirements and, possibly, a paradigm shift in mindset. With more automation and artificial intelligence (AI) tools, future NAS operations will provide safe and efficient access to a diverse set of users. There will also be a strong emphasis on airspace management or air traffic management (ATM), with operational approvals based on performance requirements and risk levels. Furthermore, in order to improve overall operational efficiency for users and air navigation service providers (ANSPs), the current ATM infrastructure should be upgraded to fully incorporate technological advances. Cutting-edge capabilities such as digitization, digital twins, data analytics, 5G, Wi-Fi, Internet of Things (IoT), machine learning, and precision tracking are driving the market growth.

According to the European Commission's report, the European Commission is proposing an upgrade to the Single European Sky regulatory framework that focuses on the European Green Deal. The primary goal is to modernize European airspace management in order to establish more sustainable and efficient flight paths. This reduces air transport emissions by 10% in the long run. The European Green Deal, combined with new technological advancements involving the increased use of drones, has placed digitalization and decarbonization of transportation at the heart of EU aviation policy. As a result, the Single European Sky serves as a gateway to European airspace that is optimally used to fuel modern technologies. Such factors have had a positive impact on the global air traffic control market's growth.

According to a report released by the United States Department of Transportation, there are efforts underway to make flights more efficient, including free flight, and are supported by commercial air carriers, for whom poor weather or crowded skies result in significant financial losses. Sustainability Master Plans fully integrate sustainability into the long-term planning of an airport. The primary goal of the Sustainability Master Plan is to identify sustainability objectives that will reduce environmental impact, realize economic benefits, and improve community relations. FAA programs such as the Noise Compatibility Program and the Voluntary Airport Low Emissions (VALE) Program assist airports in meeting these objectives.

The worldwide air traffic control market segmentation is based on the airspace, application, offering, investment type, sector, and geography. 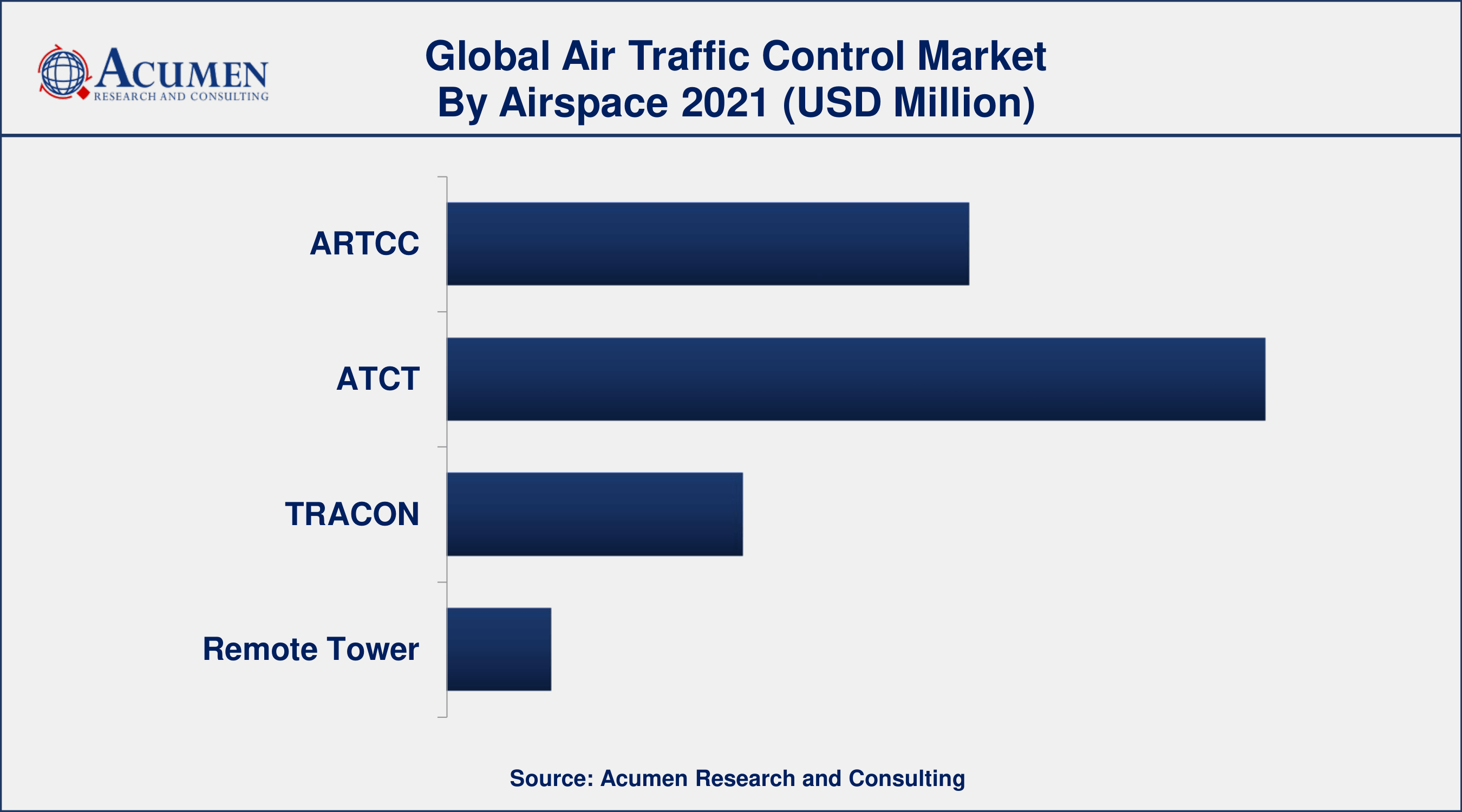 In terms of application, the automation segment is predicted to rise significantly in the market over the next few years. This expansion can be ascribed to the growing global need for smart as well as green airports, as well as the rising demand for IoT-based solutions. Furthermore, the rising need for an interactive technology ecosystem fuels the expansion of the autonomous sector. 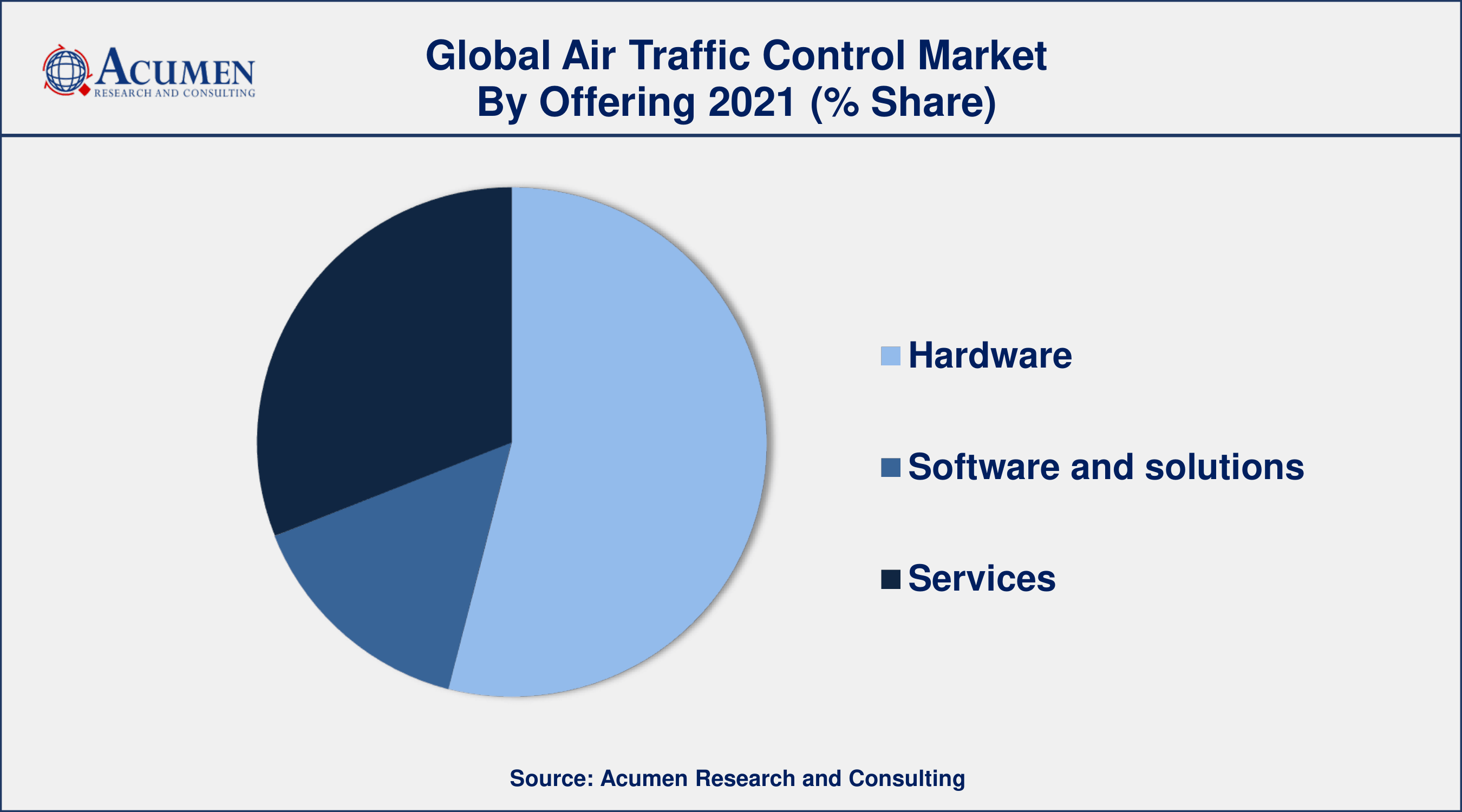 According to the air traffic control market forecast, the software and solution category is expected to grow the most during the estimated period. This is owing to the processing of all data and information, as well as the automation of various ATM procedures.

According to the investment type, the brownfield segment is predicted to increase significantly in the market over the next several years. A brownfield investment occurs when a firm or government organization purchases or rents old manufacturing facilities in order to begin a new manufacturing activity.

In terms of sector, the commercial segment is garnering substantial market attention in the coming years. Commercial aircraft is a subset of civil aviation that includes scheduled airline services that use aircraft to transport cargo and passengers. As international tourism develops and becomes increasingly accessible to the general public, airline companies will want to expand their fleets, propelling the worldwide commercial aircraft market to outstanding growth in the forecast period.

Europe dominated the air traffic control market in 2021, and this trend is expected to continue throughout the forecast period. Technological advancement greatly aids Europe's airports in controlling air traffic and is regarded as one of the most important factors contributing to the growth of the regional market. For example, Performance-Based Navigation (PBN) technology allows aircraft to fly precise routes. Apart from that, the Civil Aviation Authority (CAA) is the national airspace regulator, with powers delegated by the government. It is in charge of terminal airspace management at the local level. Once outside of terminal airspace, planes are managed by NATS, the UK's air traffic control service provider. Furthermore, airspace is managed at both the national and international levels. The Single European Sky Project was established in the past to improve the efficiency of airspace use and management across Europe. Furthermore, the CAA contributed through the Future Airspace Strategy, which outlines the UK's current thinking on how to use airspace more efficiently.

The Asia-Pacific, on the other hand, will have the fastest-growing CAGR in the air traffic control market during the forecast period. According to an IEEE report, demand for air transport in the Asia-Pacific region will skyrocket in the twenty-first century. This is due to the addition of new airports and the expansion of existing ones in Singapore, Hong Kong, Shanghai, and Korea. North Pacific traffic volumes are expected to be 2.9 times higher than the previous year. In order to deal with such air traffic, the new Communication Navigation Surveillance Air Traffic Management (CNS/ATM) system via Multi-Function Transport Satellite (MTSAT) is required. Such factors have a positive impact on the growth of the Asia-Pacific regional market, which in turn contributes to the overall growth of air traffic control.

What is the size of global air traffic control market in 2021?

The estimated value of global air traffic control market in 2021 was accounted to be USD 9,967 Million.

What is the CAGR of global air traffic control market during forecast period of 2022 to 2030?

The projected CAGR air traffic control market during the analysis period of 2022 to 2030 is 4.9%.

Which region held the dominating position in the global air traffic control market?

Europe held the dominating air traffic control during the analysis period of 2022 to 2030.

Asia-Pacific region exhibited fastest growing CAGR for air traffic control during the analysis period of 2022 to 2030.

What are the current trends and dynamics in the global air traffic control market?

By airspace segment, which sub-segment held the maximum share?

Based on airspace, ATCT segment is expected to hold the maximum share air traffic control market.