The Global Arthroscopy Market Size accounted for USD 10.4 Billion in 2021 and is estimated to garner a market size of USD 19.1 Billion by 2030 rising at a CAGR of 7.3% from 2022 to 2030. The growing base of elderly population and rising sports injuries are the leading factors that are driving the arthroscopy market share. High frequency of joint replacement therapy is one of the popular arthroscopy market trends that is strengthening the industry growth in the coming years. 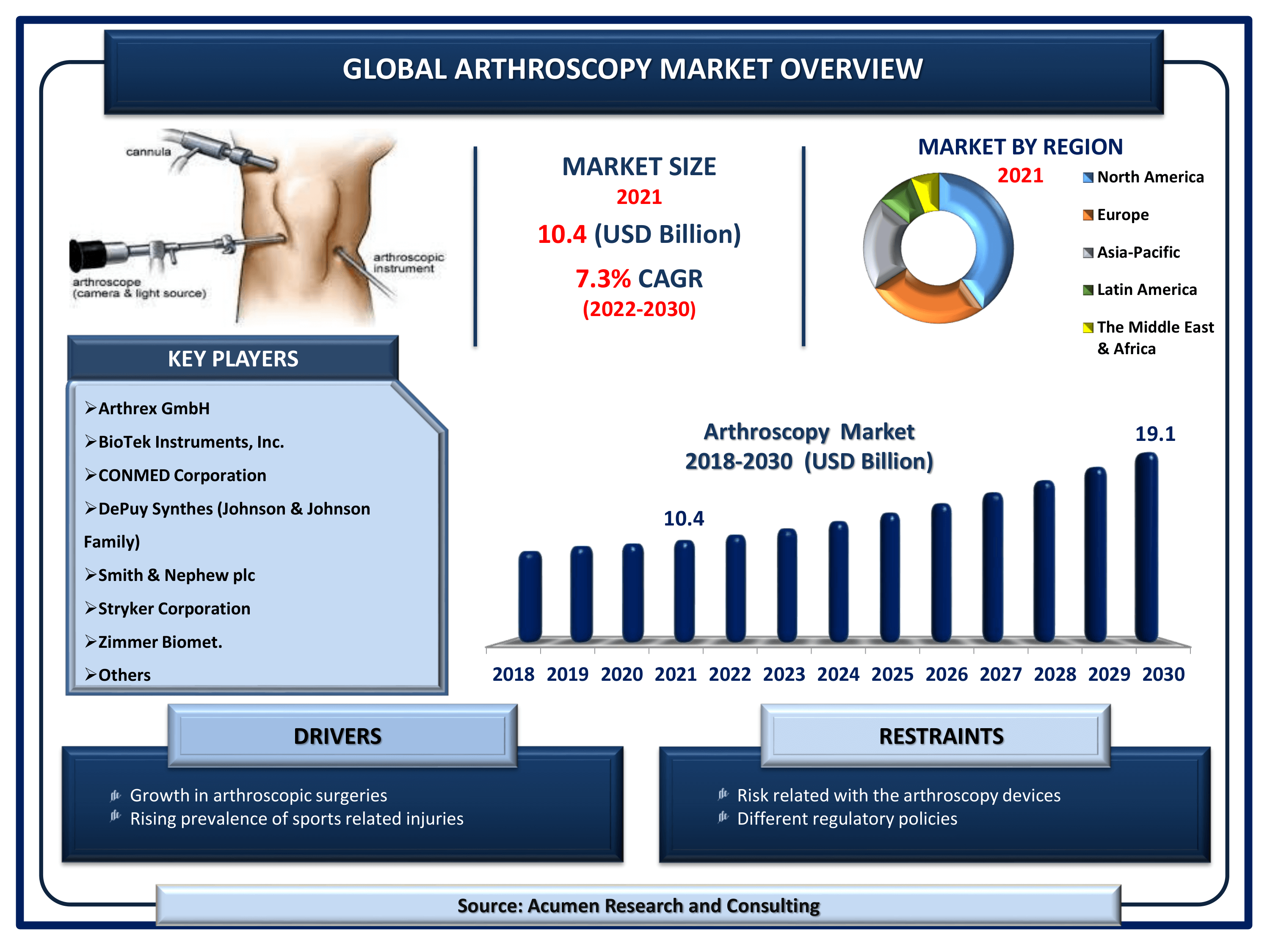 Arthroscopy is a surgical procedure where orthopedic surgeons visualize, diagnose, and treat problems inside a joint. By attaching the arthroscope to a miniature television camera, the surgeon is able to view the interior of the joint by making a very small incision rather than a large incision required for surgery.

According to the World Health Organization (WHO), approximately 1.71 billion people suffer from musculoskeletal conditions globally. High-income countries are the most affected in terms of the number of people 441 million, followed by countries in the WHO Western Pacific Region with 427 million and the South-East Asia Region with 369 million. Additionally, the growing demand for minimally invasive surgery is gaining high prominence in the arthroscopy market globally. In March 2013, SYMMETRY SURGICAL INC. announced a new product launch namely, the FlashPak® Evolution valve. Distributed by the company, the new valve's patent-pending stainless steel construction is designed for ease of use and simplicity of care.

As per the estimates released by the Center for Disease Control and Prevention (CDC), from 2013-2015, an estimated 54.4 million US adults (22.7%) annually suffer from arthritis, rheumatoid arthritis, gout, lupus, or fibromyalgia. It is projected that by 2040, an estimated 78 million (26%) US adults aged 18 years or older will suffer from arthritis. Further, joint-associated disorders accounted for 50% of chronic diseases that are prevalent in the geriatric population. With the ever-growing aging population, there is a growing demand for arthroscopy surgery techniques to facilitate the overall growth of the market.

Stem cell research in arthroscopic surgery has gained wide prominence for conducting wide research for the growth of the arthroscopy market. Researchers from CARING MEDICAL found that the intra-auricular injection of infrapatellar fat pad-derived mesenchymal stem cells (MSC) plays a vital role in reducing pain and improvement in knee function in patients being treated for knee osteoarthritis. Adult MSCs can be harvested from a series of mesenchymal tissues. Originally, MSCs were isolated from bone marrow aspirates of the iliac crest. This used to be a primary source of MSCs for orthopedic knee and shoulder surgeries. For arthroscopic surgeries, a local generation of MSCs can be incorporated during daily routine without the need for an additional extraction site is favorable. Currently, only a few clinical studies with a follow-up time frame have been published concerning the application of MSCS in arthroscopic surgery in humans.

The worldwide arthroscopy market is split based on product, application, and geography.

Based on products, arthroscopy implants have will gain substantial market share in the forecast period. According to our arthroscopy industry analysis, the high growth in the segment is credited to the high demand for knee arthroscopic surgery resulting in an integrating demand for biodegradable implants by reducing the risk of infection and its ability to improve magnetic resonance imaging by diminishing interference. Additionally, these implants fit well and require less or no additional bending, and are well-suited for diaphyseal/metaphyseal reduction. It helps in internal tissue repair, bone grafting, fixation of joints, and glenoid reconstruction fuelling the market growth of the arthroscopy market globally.

North America is dominating the global arthroscopy market in the past and will continue the same trend in the forecast period. The rising prevalence of joint-related disorders that highly involve arthritis, osteoarthritis, and sports-related injuries are the factors that contribute to the fullest growth of the regional market. According to the Arthritis Foundation, arthritis is the leading cause of disability among adults in the US. The prevalence of severe joint pain among adults with arthritis was stable from 2002 to 2014, but the absolute number of adults with severe joint pain was witnessed significantly higher in 2014 (14.6 million) than in 2002 (10.5 million), due to a spur in the population growth. Apart from that, among the elderly population, the prevalence of degenerative knee diseases is increasing in this region coupled with rising demand for knee arthroscopy owing to the prevalence of sports-related injuries. Arthroscopy knee surgery for degenerative knee disease is the most common orthopedic procedure in the US. On the other hand, Asia Pacific is projected to witness significant growth in the forecast period by recording a remarkable CAGR for the arthroscopy market globally. In the Asia Pacific, China is one of the biggest contributors to the arthroscopy regional market. This is due to high incidences of musculoskeletal disorders witnessed in this region coupled with the aging population and hub of a strong medical device manufacturing sector. China is also an evolving country for key companies owing to the presence of the target population and high unmet medical clinical needs. The global share of China is estimated to be over 29.8% by 2024. New technological advancements in China have gained huge prominence for up surging the APAC regional growth for the arthroscopic market. New visualization systems developed by the manufacturers are specialized for conducting early diagnosis and intervention of joint-related disorders as they offered a clear view of the joint. Smith & Nephew, Inc. announced the introduction of the hip arthroscopy system, a hip-specific set of cannula, obturators, and handheld instruments designed to provide surgeons with optimal access to the hip joint.

What is the size of global arthroscopy market in 2021?

The market size of arthroscopy market in 2021 was accounted to be USD 10.4 Billion.

What is the CAGR of global arthroscopy market during forecast period of 2022 to 2030?

Which region held the dominating position in the global arthroscopy market?

North America held the dominating arthroscopy during the analysis period of 2022 to 2030.

Asia-Pacific region exhibited fastest growing CAGR for arthroscopy during the analysis period of 2022 to 2030.

What are the current trends and dynamics in the global arthroscopy market?

Based on product, arthroscope implants segment is expected to hold the maximum share arthroscopy market.