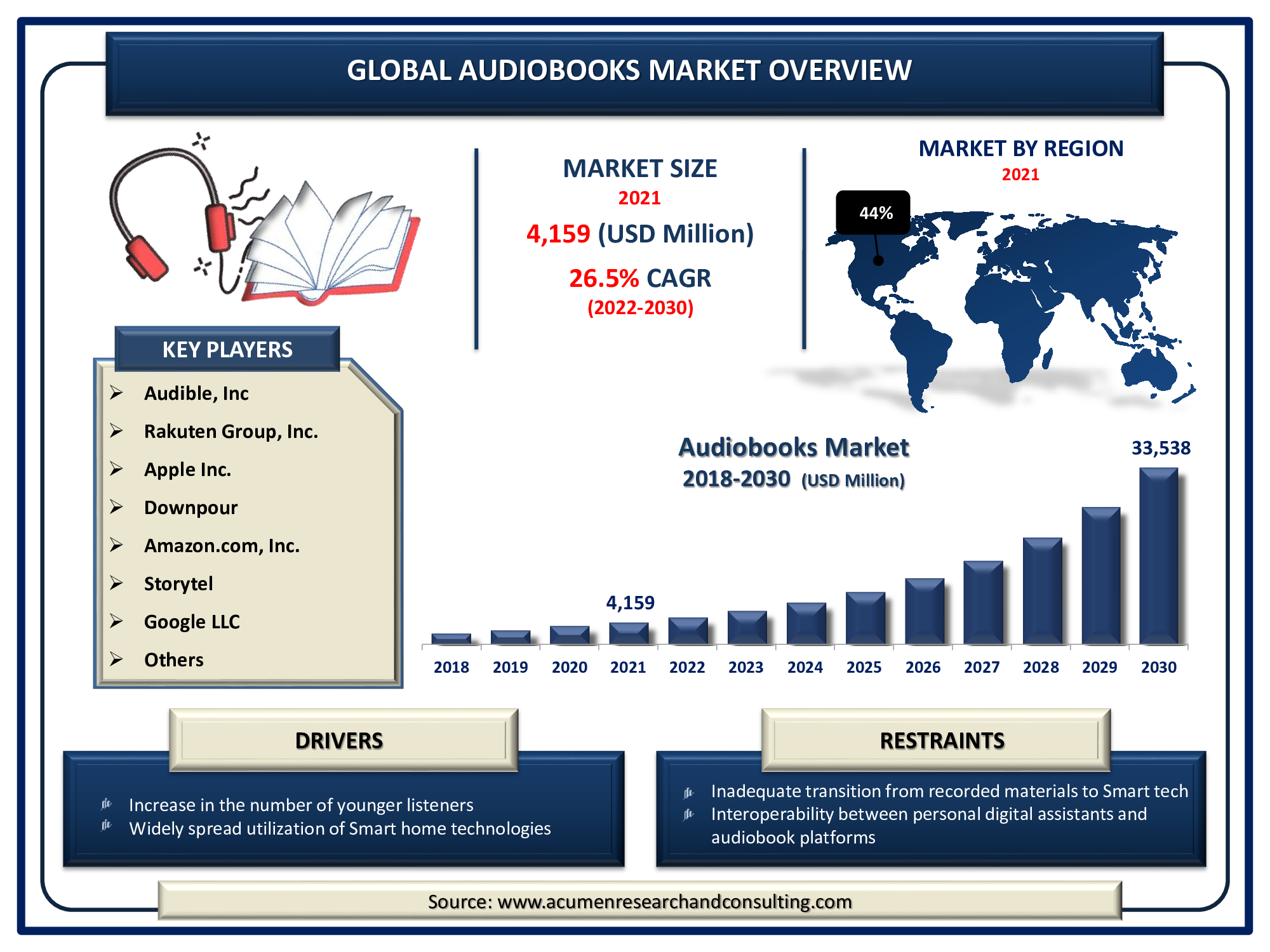 The increase in demand for eBooks as well as the expansion of audiobook subscription businesses has contributed to the audiobooks market growth in recent years. Furthermore, the growing usage of smart home technology has created a lucrative opportunity for the audiobooks market size in the coming years.

Audiobooks or E-books are transcriptions of physical copies of books or even other materials that have been transformed into audio clips in order to be read aloud. Audiobooks are quickly becoming the most relaxing way to develop a reading habit. Audiobooks have allowed us to listen to books virtually wherever, whether on the way to work, on holiday, or just in the bath. Technological developments in audiobook creation have involved a variety of activities such as the online transmission of papers, multitrack recording, and the use of tablet devices rather than hard copies. The rising development of home-based production companies has facilitated writers to minimize the length taken to develop audio tracks together with saving time and money. Furthermore, audiobooks are comprehensive, informative, educational, and amusing, making them ideal for both the time rich and time poor. It can also influence the way people listen, understand, and learn, helping younger audiences and those learning English as a second language.

Audiobooks have grown significantly in popularity over the last few years all around the world. Such growth is due to an increase in smartphone usage, which allows customers to choose audiobooks or e-books over conventional media due to the wide variety of audiobooks available. This encompasses, among other things, screen-free time, multitasking, and increased relaxation. Furthermore, higher disposable incomes among individuals, which allow them to adopt new technology tools for a variety of activities, are among the factors driving the audiobooks market trend. Furthermore, the growing popularity of podcasting and music streaming around the world is paving the road for the audiobooks market to take off. The increasing use of IoT-based devices in home automation, as well as the wide applications of portable electronic products, particularly cell phones, has created enormous market development opportunities.

The COVID-19 outbreak arose as a result of a favorable impact on market growth caused by increased use of smart gadgets such as audio devices and smartphones as the government imposed rigorous shutdowns and enforced in-home separation for the general public. Due to stay-at-home regulations, market participants, as well as book readers, prefer digital solutions, particularly audio forms, for reading desires. As universities and traditional bookstores were immediately suspended till further consideration, student demand for the gadgets surged. Similarly, several market producers are supplying a diverse choice of products in order to provide their customers with unique screen-free amusement via gadgets. For example, Audible, Inc. publicly released an online recorded audiobook variety of top novels, instructional resources, literature, and tales on various platforms with no sign-in or registration information necessary.

The global audiobooks market segmentation is based on the genre, preferred device, distribution channel, target audience, and geographical region.

Based on the Genre, the friction segment will dominate the global market in 2021. Within the fiction genre, sci-fi and mystery have garnered special attention from the intended audience. The average length of an audiobook or e-book is among the most important elements influencing its popularity. Based on these genres, an average audio album will last around 7 and 9 hours. While sci-fi and fantasy literature might be quite long, humor and comedy books are usually relatively short. As casual listeners prefer shorter-form material, the primary participants have a difficult sell. To avoid this, famous organizations are selling audiobooks with 5 to 6 chapters in order to keep their targeted audience engaged. 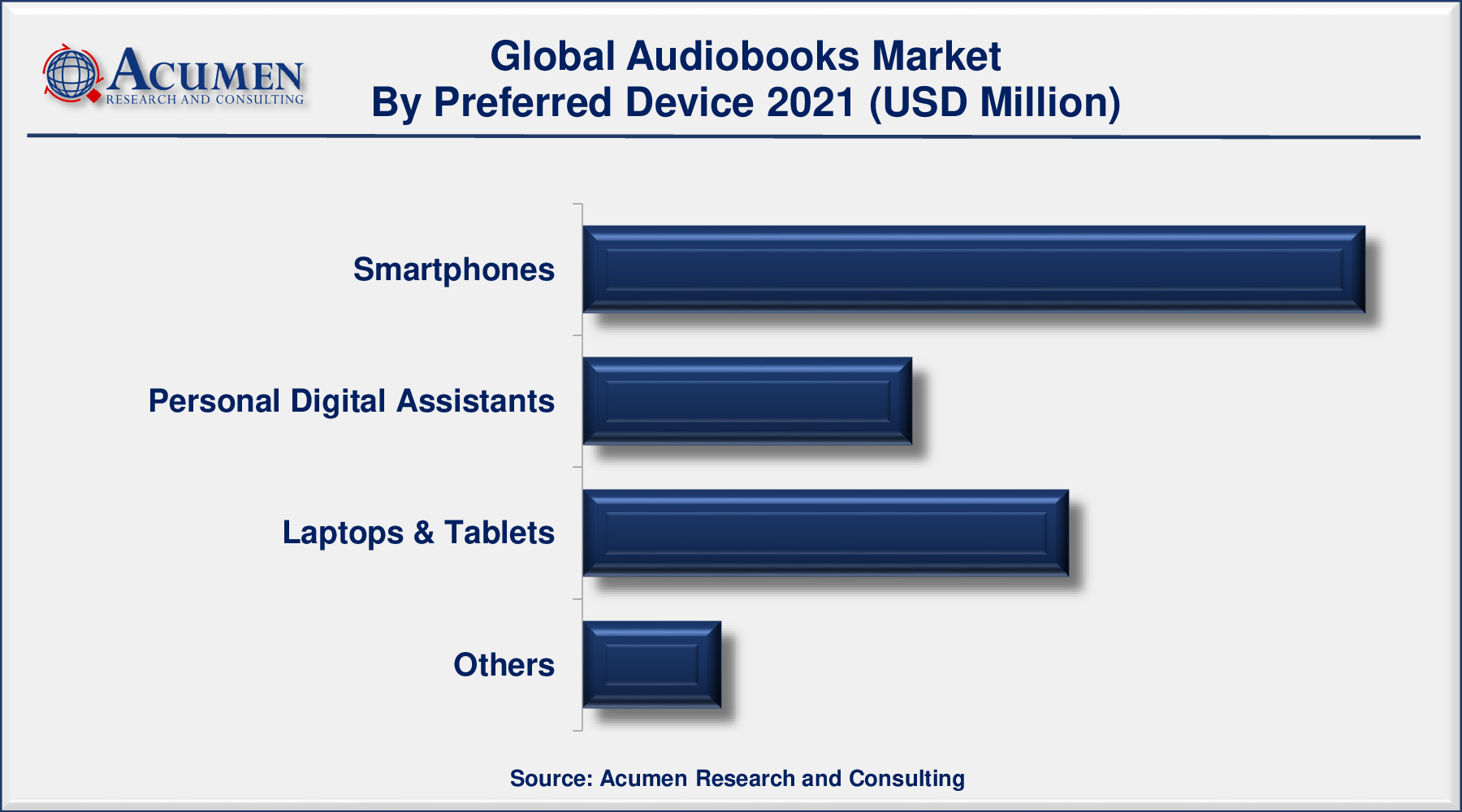 According to the audiobooks industry analysis, smartphones have a prominent position in the audiobooks market and are predicted to ascend during the projection year. The segment expansion is attributed to the convenience of obtaining smartphones in different areas, which allows users to access or explore a variety of audio content. Furthermore, the rising use of smartphones for a range of applications by individuals of all ages is among the factors driving the future market growth. Furthermore, Smartphones appear to be the most popular listening device among individuals when compared to other devices due to their portability and lightweight properties, which helps to the expanding market.

According to the audiobooks market forecast, the one-time download segment is expected to grow at the fastest rate in the coming years. This rise is due to increased consumer preference for single high-quality audible novels. Furthermore, an increase in the provision of promotions by businesses to encourage customers is among the factors driving the market growth. 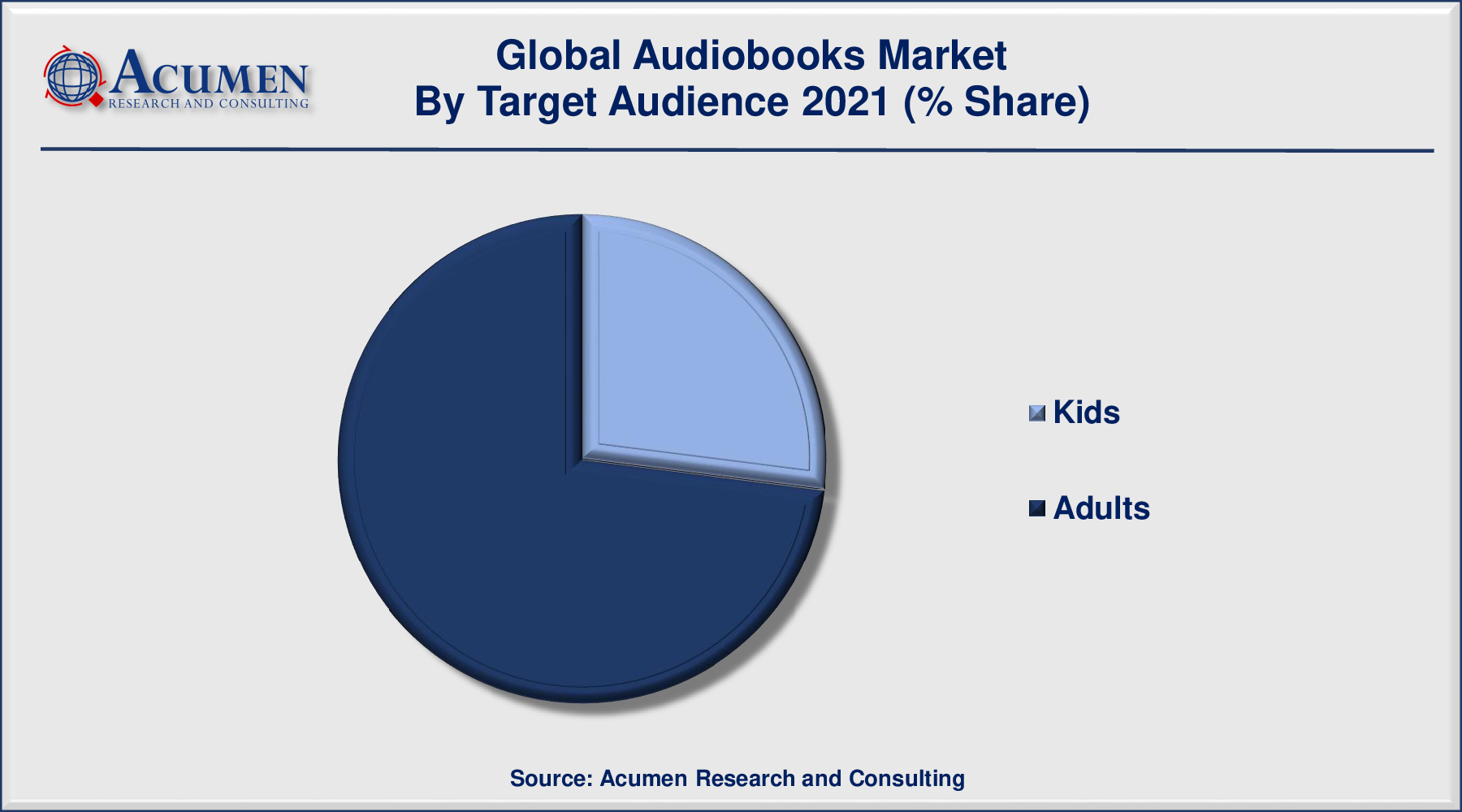 In terms of the target audience, the adult group held the largest market share in 2021. This is owing to the large selection of audiobooks available, which incorporates relaxation exercises and brain stimulation. The development of automotive infotainment features that allow customers to listen to audiobooks while driving or doing other activities is boosting the market's growth. Aside from that, the kid's segment is expected to grow dramatically in the coming years due to the rising usage of eBooks for teaching and learning purposes. In addition, several audiobooks are now being produced for the enjoyment of children. The influence organizational performance of audiobooks for youngsters in growing a spiritual intelligence, such as advanced vocabulary, increased visualization, promoted visual storytelling, and many others, are projected to create substantial growth future prospects.

North America is expected to dominate the worldwide market due to rapid technological development, rising disposable incomes, and widespread consumer electronics usage. The early and rapid adoption of technology in order to improve customer experience is a fundamental driver of regional market growth. The presence of large numbers of prominent firms offering audiobooks and e-books in the region is driving the market growth. Another factor fueling market expansion is the region's significant number of mobile phone users. In this region, the United States generates the most revenue globally. The United States remains one of the most important marketplaces in the world, with some of the most storybook readers.

How much was the global audiobooks market size in 2021?

The global audiobooks market size in 2021 was accounted to be USD 4,159 Million.

What will be the projected CAGR for global audiobooks market during forecast period of 2022 to 2030?

Which region held the dominating position in the global audiobooks market?

North America held the dominating share for audiobooks during the analysis period of 2022 to 2030.

Asia-Pacific region exhibited fastest growing CAGR for audiobooks during the analysis period of 2022 to 2030.

What are the current trends and dynamics in the global audiobooks market?

By segment genre, which sub-segment held the maximum share?

Based on genre, fiction segment hold the maximum share for audiobooks market in 2021.