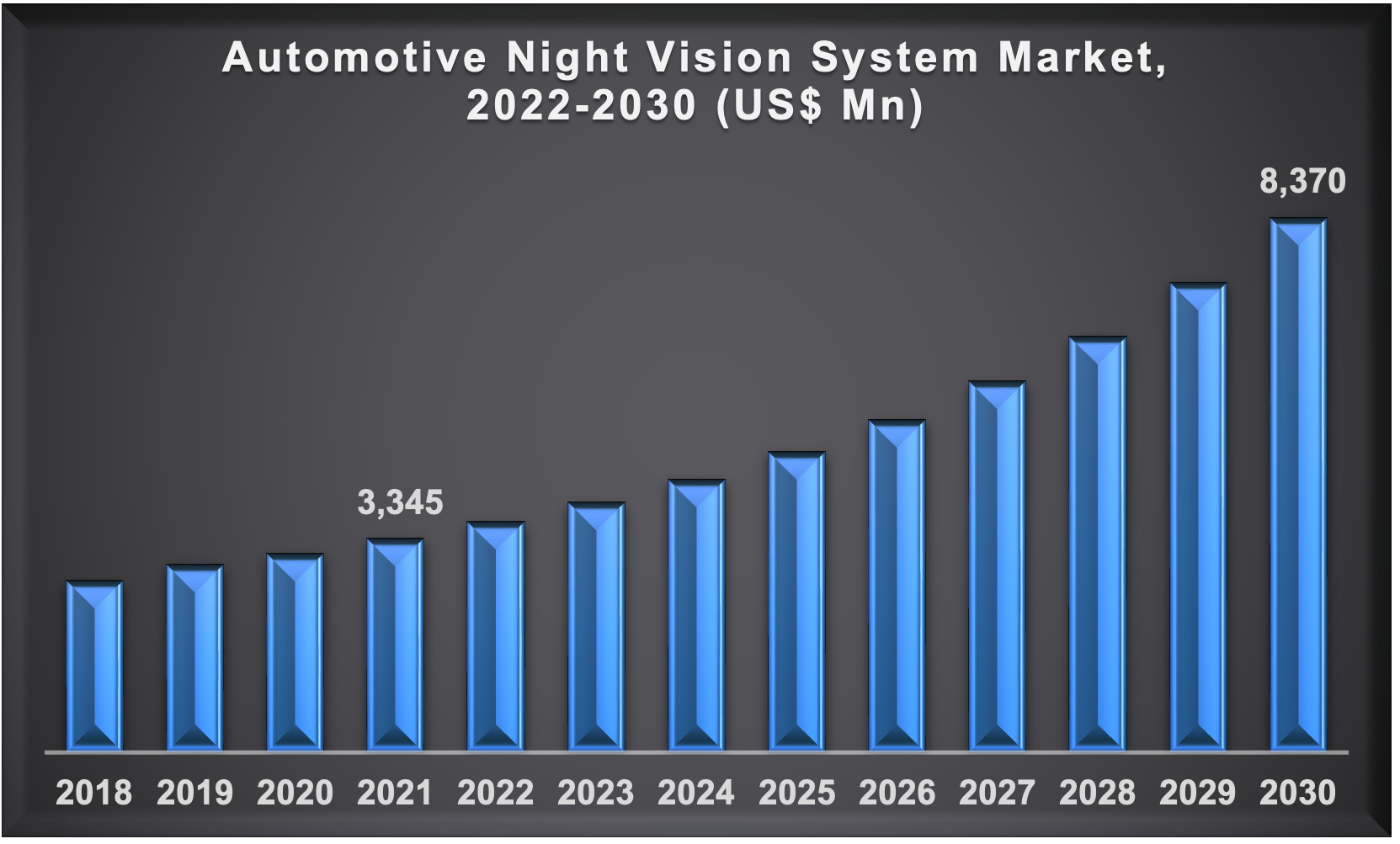 An automotive night vision system is a technology that allows drivers to see clearly during the night or in poor weather. This system used infrared image sensors to detect and generate images of objects that are unclear to view in the absence of enough visible light. A special camera is used to capture small amounts of reflected light and amplify it to generate a display on a cluster. To sense and detect things, the automobile night vision system uses NVDs such as infrared cameras, Radar, Lidar, and GPS, among other technologies. Traditional headlights only highlight items that are roughly 180 feet away; however, night vision systems can identify objects that are more than 500 feet away. Because a car's stopping distance can easily exceed 180 feet, it's evident that using a night vision system properly can assist an aware driver in avoiding collisions. Night vision systems in automobiles have been present since 1988, but they are still exclusively seen in luxury vehicles. Typically, the technology is optional and can be rather costly.

Factory closures, supply chain disruptions, and a drop in demand have all impacted the automotive industry hard. The influence has spread around the world thanks to just-in-time production procedures. The auto industry has shown incredible resiliency in recent months. It has recovered from the economic lows of spring 2020, delivering year-over-year gains in new-vehicle sales in China, Europe, and the United States in recent months. The global Covid-19 pandemic has affected people's transportation habits all across the world in just a few months. In April 2020, for example, mobility for recreational and retailing purposes fell by 35%, and trips to businesses fell by 37% in the United States. In Germany, the decline in mobility behavior was even more pronounced for recreational and retailing purposes (51%) than for occupational mobility (38%). Despite promising news on vaccine progress, significant dangers remain, and thus the sales in Europe and the United States will not recover to pre-COVID levels until at least next year.

Growth in the number of accidents during the nighttime is the primary factor propelling the growth of the global automotive night vision system market. According to Public Revenue Bureau Organization, road traffic accidents are the top cause of injury death and the tenth leading cause of all deaths worldwide. Every year, an estimated 1.2 million people are killed and up to 50 million are wounded in traffic accidents. In addition, according to the WHO, despite improvements in road and law enforcement, the rate of accidents grew by 0.3 percent between 2000 and 2012. Road accidents are the 9th greatest cause of death in the world, with 17.7 deaths per 100,000 people. Pedestrians, cyclists, and motorcyclists, as well as their passengers, account for more than half of all road traffic deaths and injuries.

Other factors fueling the demand for the automotive night vision industry are growing government regulations about road safety and the increased sales of the luxury car. For instance, according to the Indian Brand Equity Foundation, in 2021 the luxury car market registered sales of more than 8,500 units. However, the high cost of the technology and lack of technical standardization in this technology is creating a roadblock to the growth of the market. Furthermore, the emergence of autonomous driving technology and growing technological improvements in thermal imaging technologies among automobiles are some of the factors that are likely to create numerous growth opportunities for the market in the coming years.

The active systems use infrared light sources to illuminate objects a significant distance ahead, whereas the passive systems use technologies to detect thermal radiation released by humans, animals, and other items on the road.The range of passive night vision is extended up to 1,000 feet, although the images are not as clear. The passive segment held a significant amount of share in the product segment.Most automobiles with night vision come with passive sensors, which are more efficient at monitoring heat without the need for additional illumination. The disadvantage of passive vision is that it is unreliable in hot weather (over 98 degrees). Thermographic cameras are used to detect thermal radiation in these systems.

In 2021, the night vision camera segment held a significant amount of share in the component segment. Night vision driving cameras can sense thermal heat signatures thousands of feet beyond the range of a car's standard headlights, boosting the driver's reaction time and allowing them to notice things they wouldn't be able to see otherwise. Liability protection is another significant advantage of employing night vision dash cams. It might be difficult to determine exactly what happened and who was responsible for an accident, especially at night. It provides solid protection in the event of an accident, thanks to a night vision system that records everything. 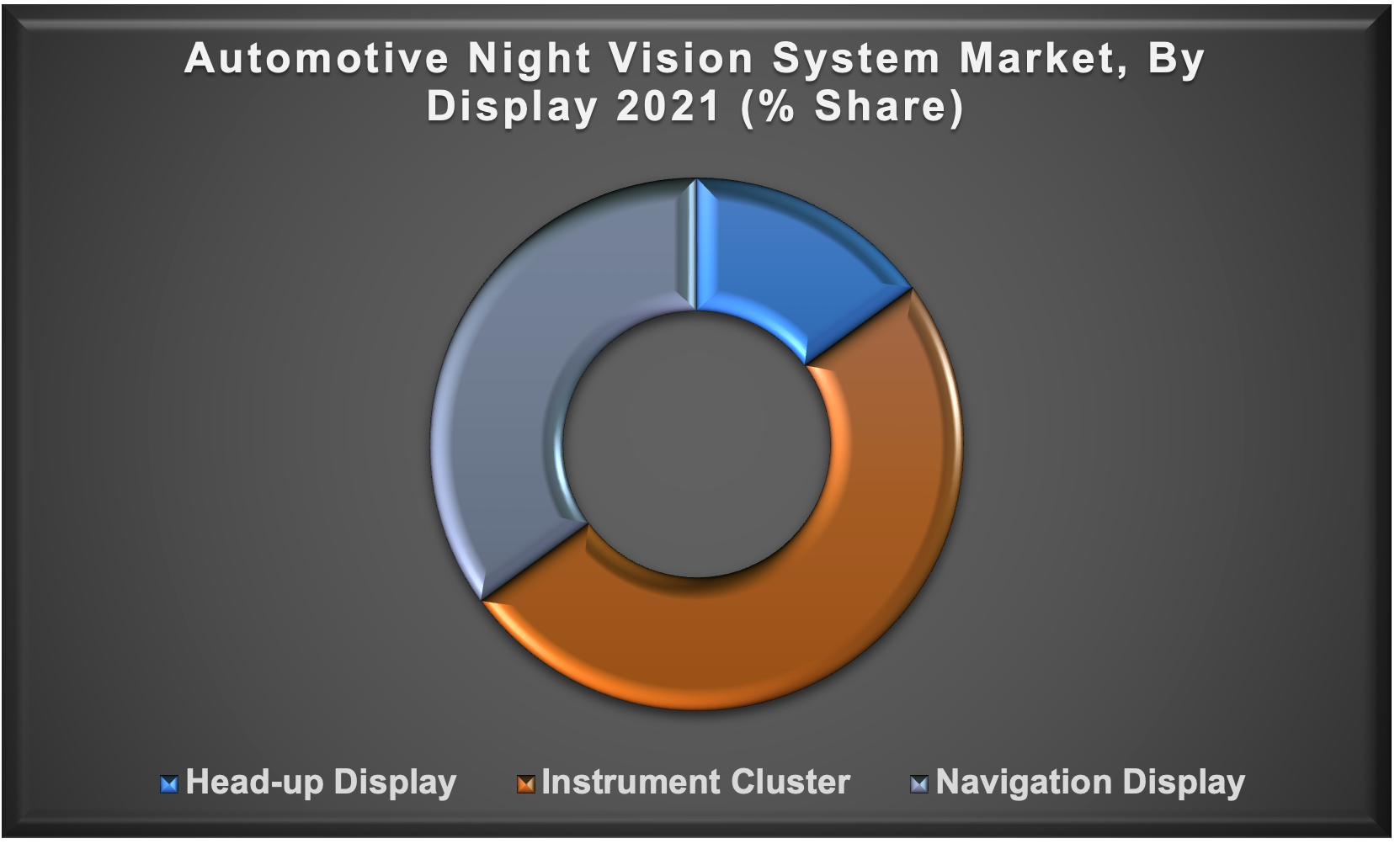 Among displays, the segment of the instrument cluster is likely to attain a substantial market share in the projected years. An instrument cluster is a control panel located in the center console of a car or small plane. It displays instrumentation and controls for the vehicle's operation and is usually located directly ahead of the driver (or pilot). On the other hand, the head-up display segment is expected to gain a significant push in the coming years. Head-up displays (HUDs) show vehicle data symbols on a transparent combiner glass while allowing drivers to see out the window.

Based on the regional segmentation, the Asia-Pacific region is anticipated to lead the market with respect to growth rate during the predicted years from 2022 to 2030. The high growth in the region is credited to the rising sales of luxury as well as electric vehicles in countries such as China, India, Japan, and South Korea. According to the International Energy Agency (IEA), the new energy vehicle mandate in China has been tightened, with new credit targets set for 2021-2023 and a more stringent credit calculation procedure for credits after 2021. Meanwhile, the current market is dominated by the North American region due to the early adoption of technologies, strict road safety regulations, and an increasing trend of autonomous vehicles.

How much was the estimated value of the global automotive night vision system market in 2021?

The estimated value of global automotive night vision system market in 2021 was accounted to be US$3,345 Mn

What will be the projected CAGR for global automotive night vision system market during forecast period of 2022 to 2030?

The projected CAGR of automotive night vision system market during the analysis period of 2022 to 2030is 11.1%

What are the current trends and dynamics in the global automotive night vision system market?

By segment product, which sub-segment held the maximum share?