The Global Automotive Radar Market Size accounted for USD 4,138 Million in 2021 and is estimated to achieve a market size of USD 22,536 Million by 2030 growing at a CAGR of 21.1% from 2022 to 2030. The rising number of road accidents and casualties has led to a rise in the demand for advanced safety systems in vehicles driving the automotive radar market growth. Furthermore, the advancement of new radar technologies, such as frequency-modulated continuous wave (FMCW) radar, is propelling the automotive radar market value upward in the coming years. 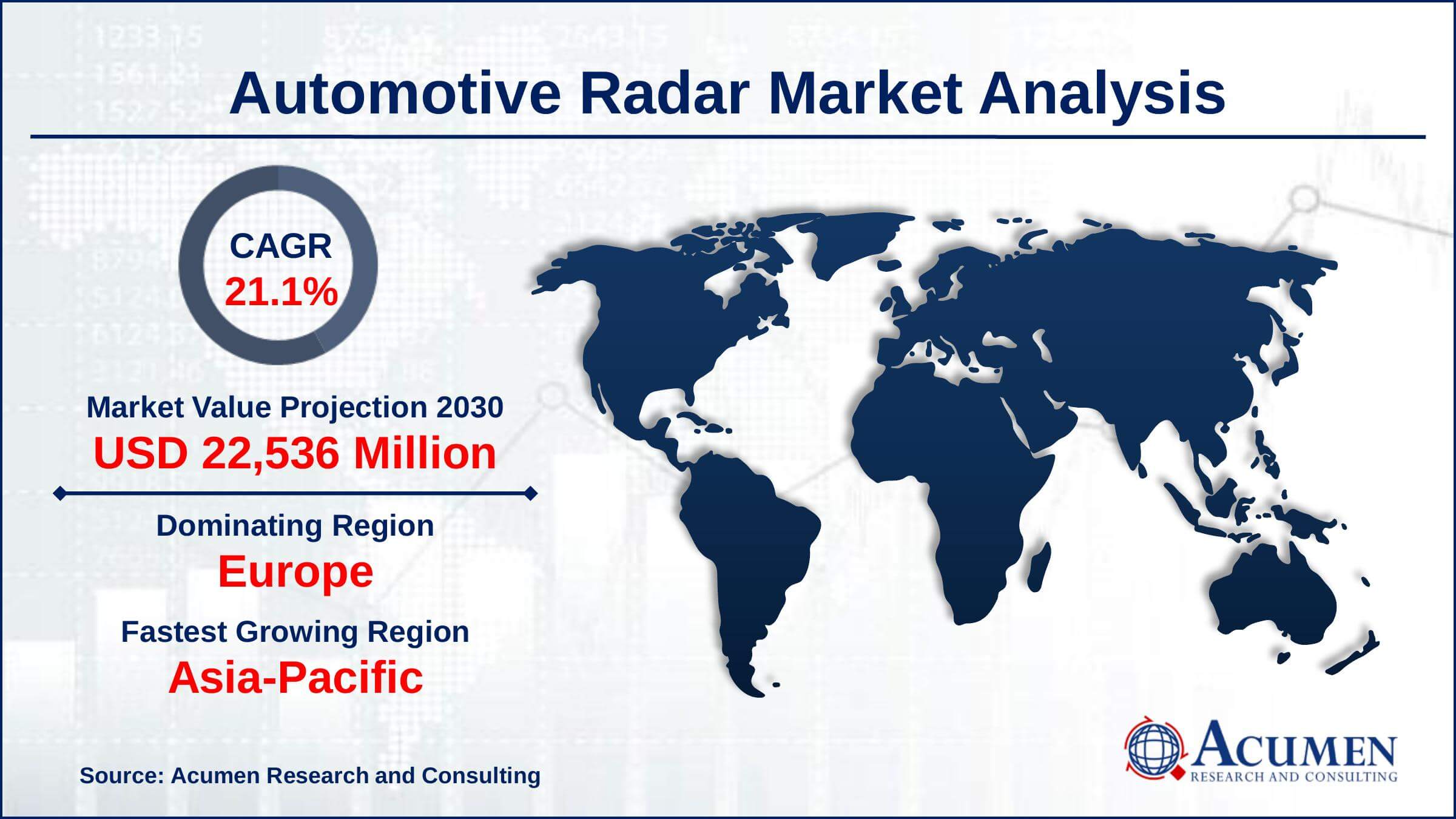 Radio Detection and ranging also known as RADAR, is electronic equipment that is used for tracing any object. The system which detects any objects within its radius by the use of radio waves in order to determine the spread angle, area and speed is called automotive RADAR. This system was initially developed for defense and military purposes, but it has witnessed a massive increase in use in the automobile sector as a result of ongoing technological innovations. These devices are installed in passenger vehicles in the form of radar sensors for delivering information such as angle, range, and Doppler velocity and also to help the drivers to avoid the collision. 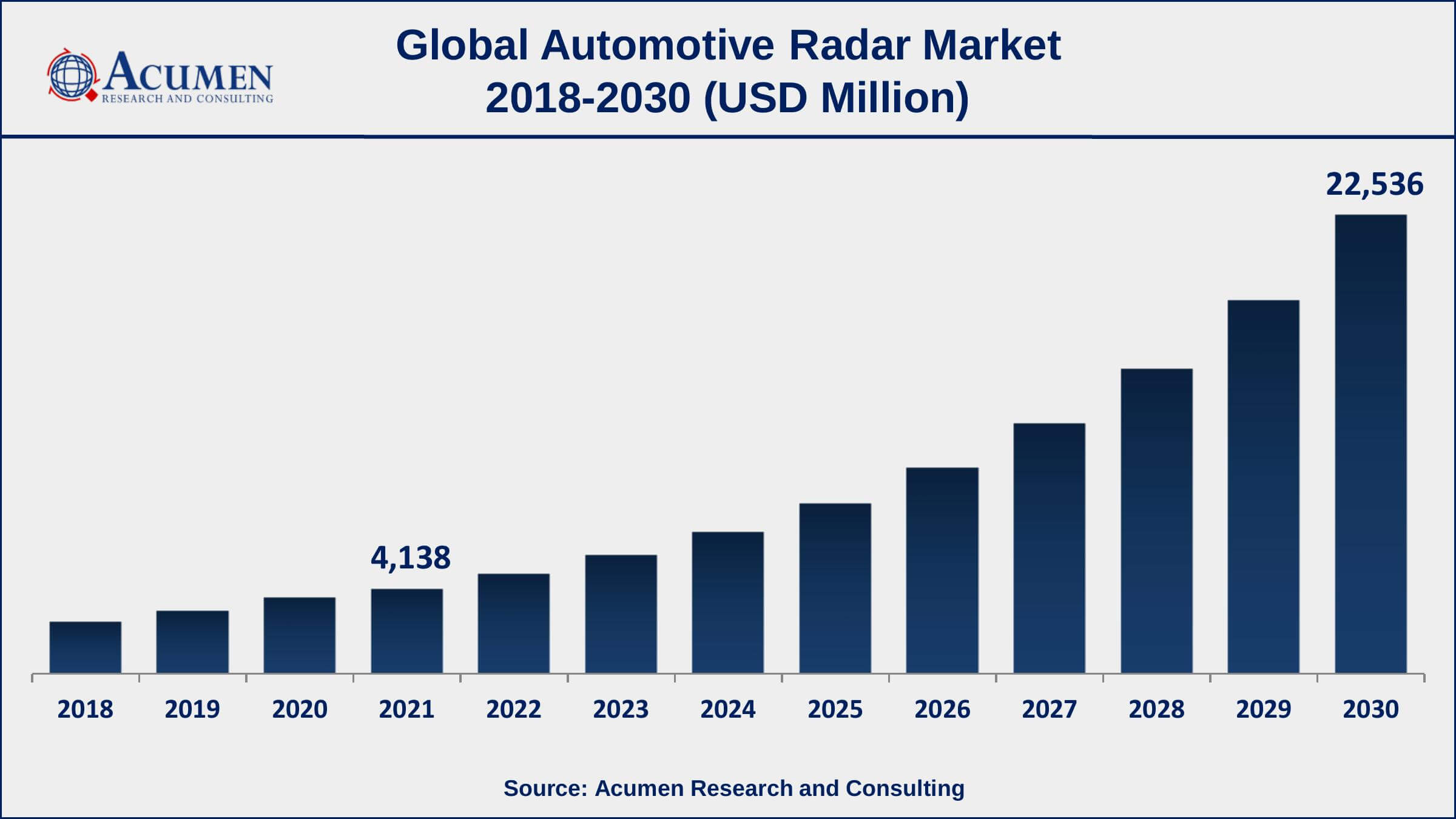 A number of system and chip manufacturing companies are involved in the automotive RADAR market. Many players have adopted a different strategies for the development of the market. For instance, in June 2019, Vayyar Imaging from Tel Aviv launched its first automotive 4D point cloud application on a single radar chip. 4D point cloud transforms radar technology by constructing a real-time, high-resolution 4D visualization of both in-cabin and car exterior environments. The company’s Radar on a Chip (ROC) consists of 48 transceivers at 76-81GHz which allows over 2,000 virtual channels.

The worldwide automotive radar market segmentation is based on the frequency, vehicle type, range type, application, and geography.

According to an automotive radar industry analysis, the 77 GHz frequency segment is gaining significant attention in 2021. 77 GHz radar works at a frequency range of 76-81 GHz and is utilized for short-range applications such as collision warning, adaptive cruise control, and lane departure warning. It has great accuracy and resolution but it is vulnerable to interference from other electrical components in the car. Due to its capacity to detect objects with high accuracy & function in a wide range of weather conditions, 77 GHz radar is becoming increasingly popular in the automotive industry. 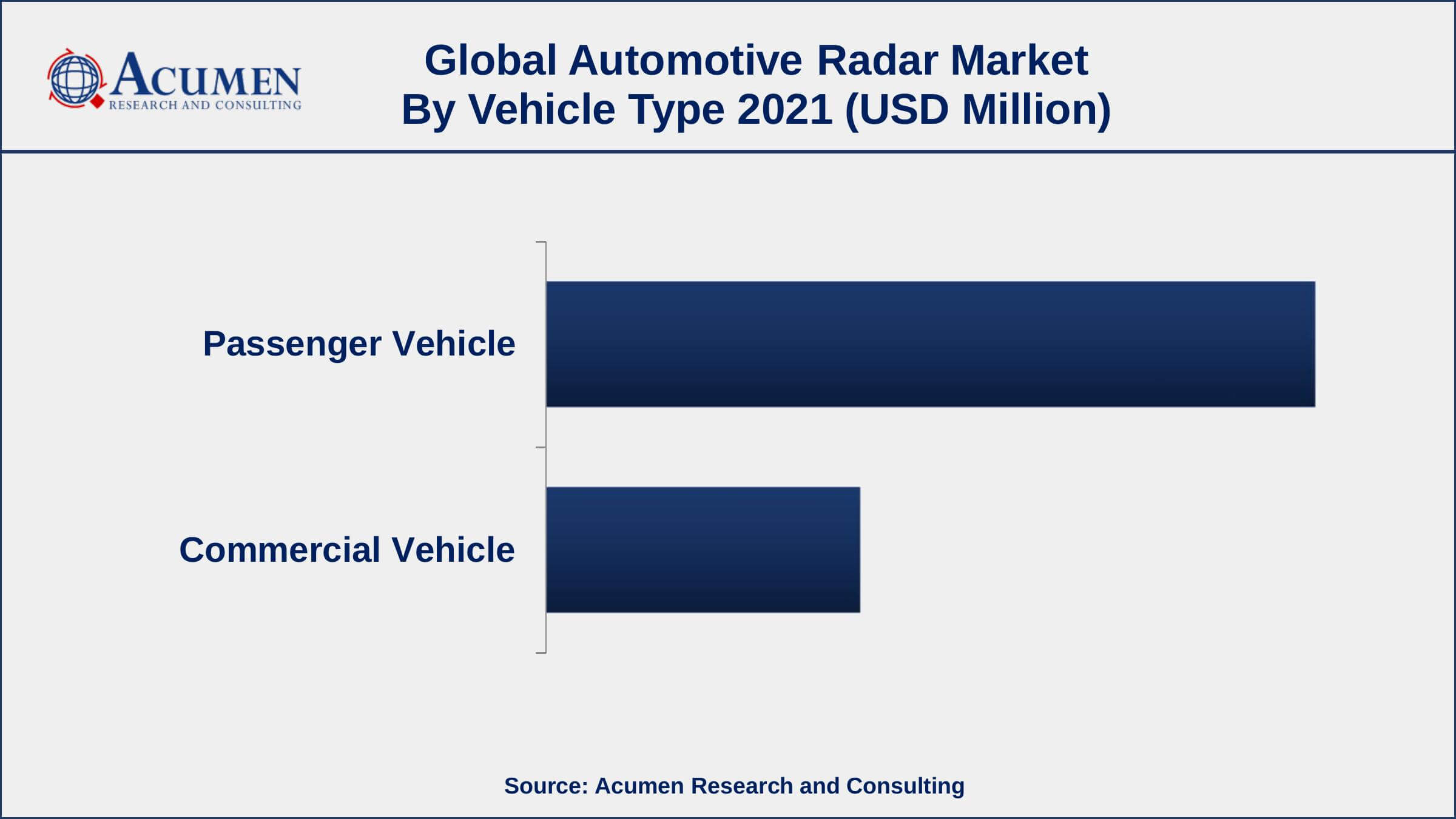 In terms of applications, the adaptive cruise control (ACC) segment is one of the leading segments in the market. ACC is a driver assistance technology that employs radar to keep a safe following distance between the vehicle in front. ACC detects the distance and velocity of the car in front using radar and changes the vehicle's speed accordingly. This can help reduce the risk of rear-end collisions while also improving driving efficiency. 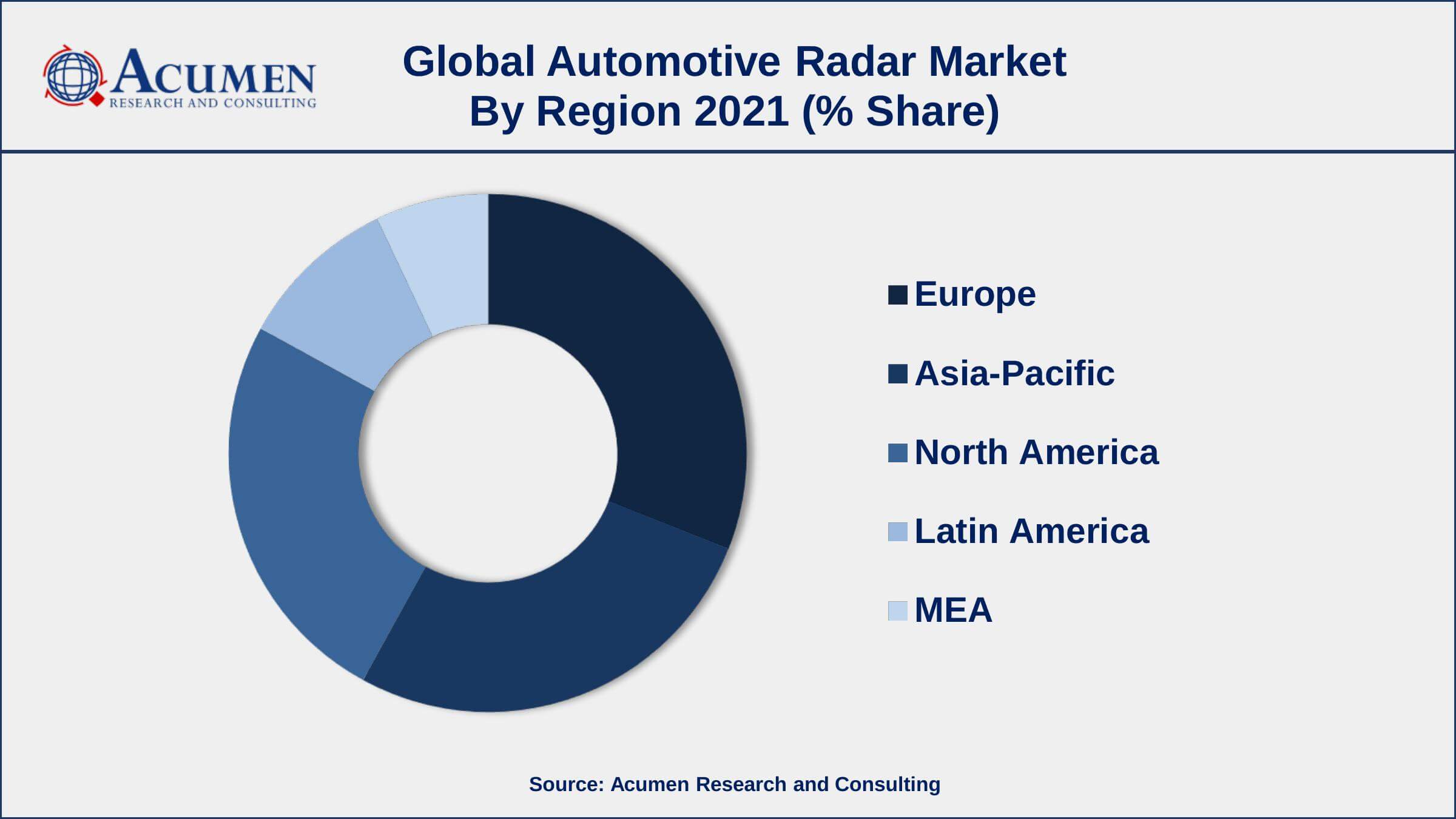 Geographically, the Europe region is leading the market in 2021. The European market is expected to grow significantly due to the region's rising adoption of ADAS and autonomous vehicle systems. The presences of significant manufacturers, as well as the execution of stringent safety standards, are projected to drive growth in the European automotive radar market.

The Asia-Pacific market is expected to witness the highest growth due to the increasing demand for vehicles and the presence of a large number of manufacturers in the region. The region's increasing adoption of ADAS and autonomous driving technology is likely to fuel the growth of the Asia-Pacific automotive radar market.

What is the size of global automotive radar market in 2021?

The estimated value of global automotive radar market in 2021 was accounted to be USD 4,138 Million.

What is the CAGR of global automotive radar market during forecast period of 2022 to 2030?

Which region held the dominating position in the global automotive radar market?

Europe held the dominating automotive radar during the analysis period of 2022 to 2030.

Asia-Pacific region exhibited fastest growing CAGR for automotive radar during the analysis period of 2022 to 2030.

What are the current trends and dynamics in the global automotive radar market?

By vehicle type segment, which sub-segment held the maximum share?