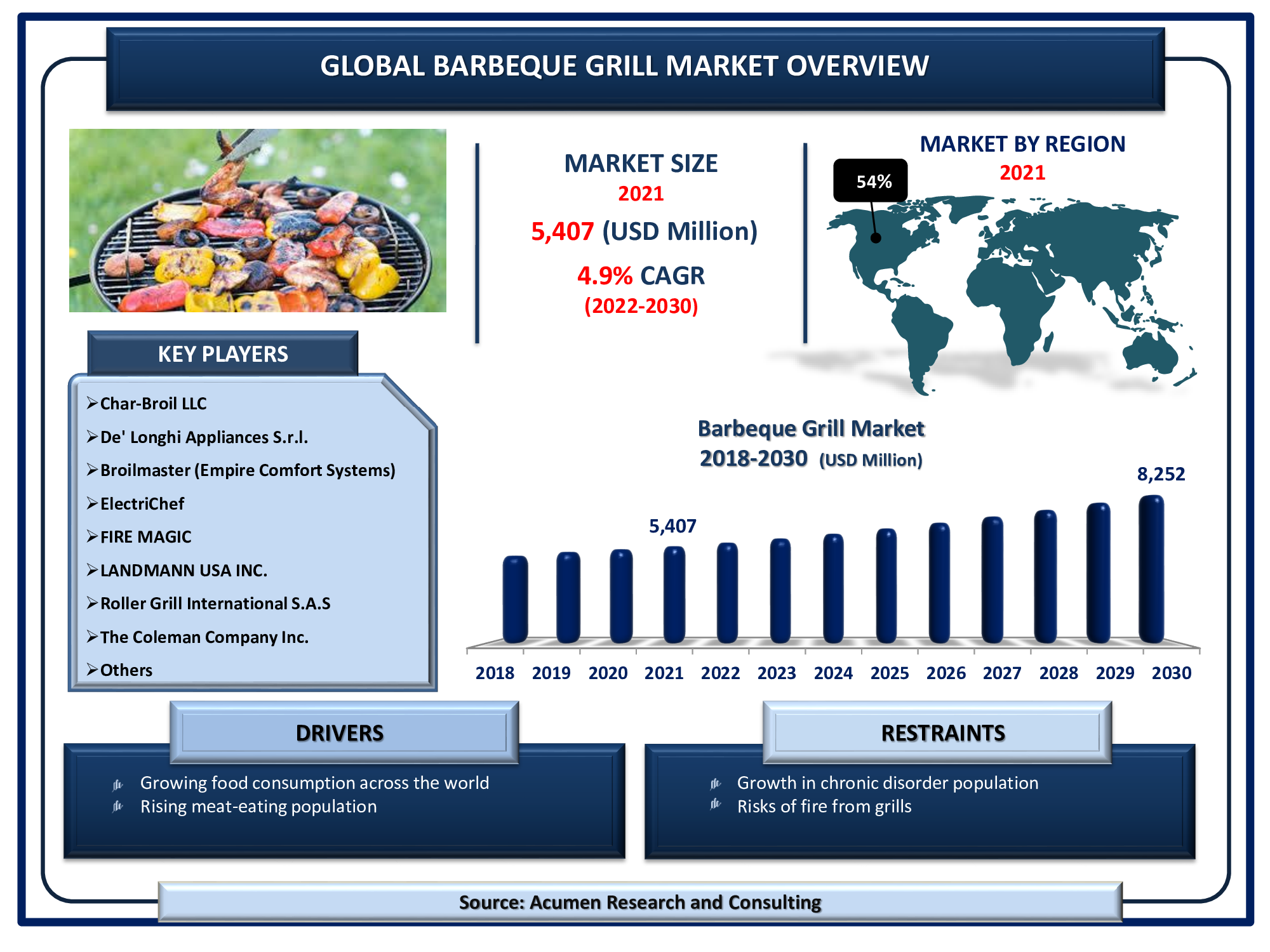 The growing demand for cookouts on holidays and weekends is a prominent global barbeque grill market trend. Global food consumption is also driving revenue in the barbeque market. Barbecue grills, also known as BBQ grills, are cooking devices that heat food from below. Barbecue grills are common household objects that are mostly used outside. Barbeque grills are a convenient option because they significantly reduce the amount of time required to prepare a meal. Grills also allow people to leave the confines of the kitchen and enjoy the scenery outside. This factor is also likely to propel the barbeque grill industry demand between 2022 and 2030.

Another important factor driving the global barbeque drill market is the growing popularity of cookouts and outdoor parties. This is a popular trend in the United States, where people celebrate national holidays such as the Fourth of July, New Year's Eve, and Thanksgiving, among others. This factor has increased and will continue to increase the barbeque grills supply and demand. According to our barbeque grill industry analysis, the growing popularity of barbeque chicken, barbeque pork, and barbeque beef in countries such as Argentina, Australia, Japan, South Africa, South Korea, Indonesia, and others is expected to drive the market in the coming years.

However, the rising prevalence of chronic disorders may stifle market growth. Even though grill-cooked food contains less fat and calories than fried food, it is associated with some health risks. According to a study published in Women's Health Magazine, both deep-frying and grilling produce advanced glycation end products, which can lead to chronic disorders such as heart disorder, diabetes, and even Alzheimer's. Furthermore, the increasing consumer adoption of electric barbecue grills is expected to create profitable growth opportunities for the market in the near future. In addition, the growing number of restaurants and hotels around the world will drive demand for barbeque grills from 2022 to 2030. Hotel and restaurant tycoons are focusing on dedicated barbeque food chains, which has increased global sales of barbeque grills. Franklin Barbecue (US), Vento Haragano (Brazil), La Brigada (Argentina), Smokestak (UK), Barbeque Nation (India), and many others are among the top barbeque restaurants in the world. Increasing number of these barbeque-based foodchains will definitely spur the industry share globally.

The worldwide barbeque grill market is split based on product, application, and geography. 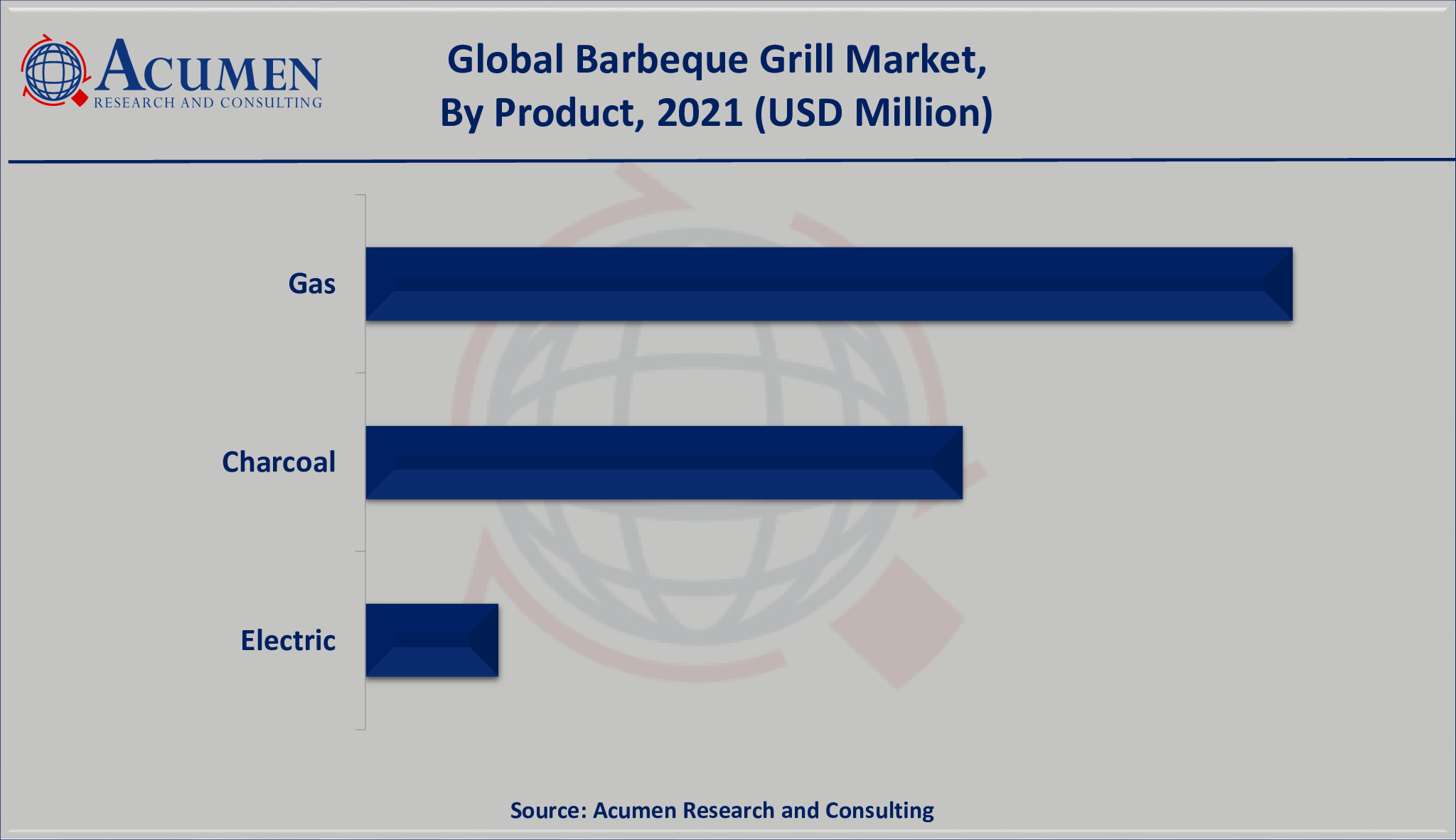 According to our barbeque grill market forecast, the gas segment will have a significant market share from 2022 to 2030. Gas grills generate less ash and are usually easier to clean than charcoal grills. Gas grills do not produce nearly as many harmful air pollutants as charcoal grills, such as carbon monoxide, carbon dioxide, and soot. Gas grills generally have two or more burners with independent temperature controls, allowing individuals to cook different types of meat, fish, or vegetables at different temperatures.

Electric barbeque grills, on the other hand, are expected to grow at the fastest CAGR during the forecast period due to their unique benefits that are unmatched by other cooking grills, such as their ability to be used indoors, smoke-free grilling, preference for healthy grilled food, and inclination for homemade grilled food. 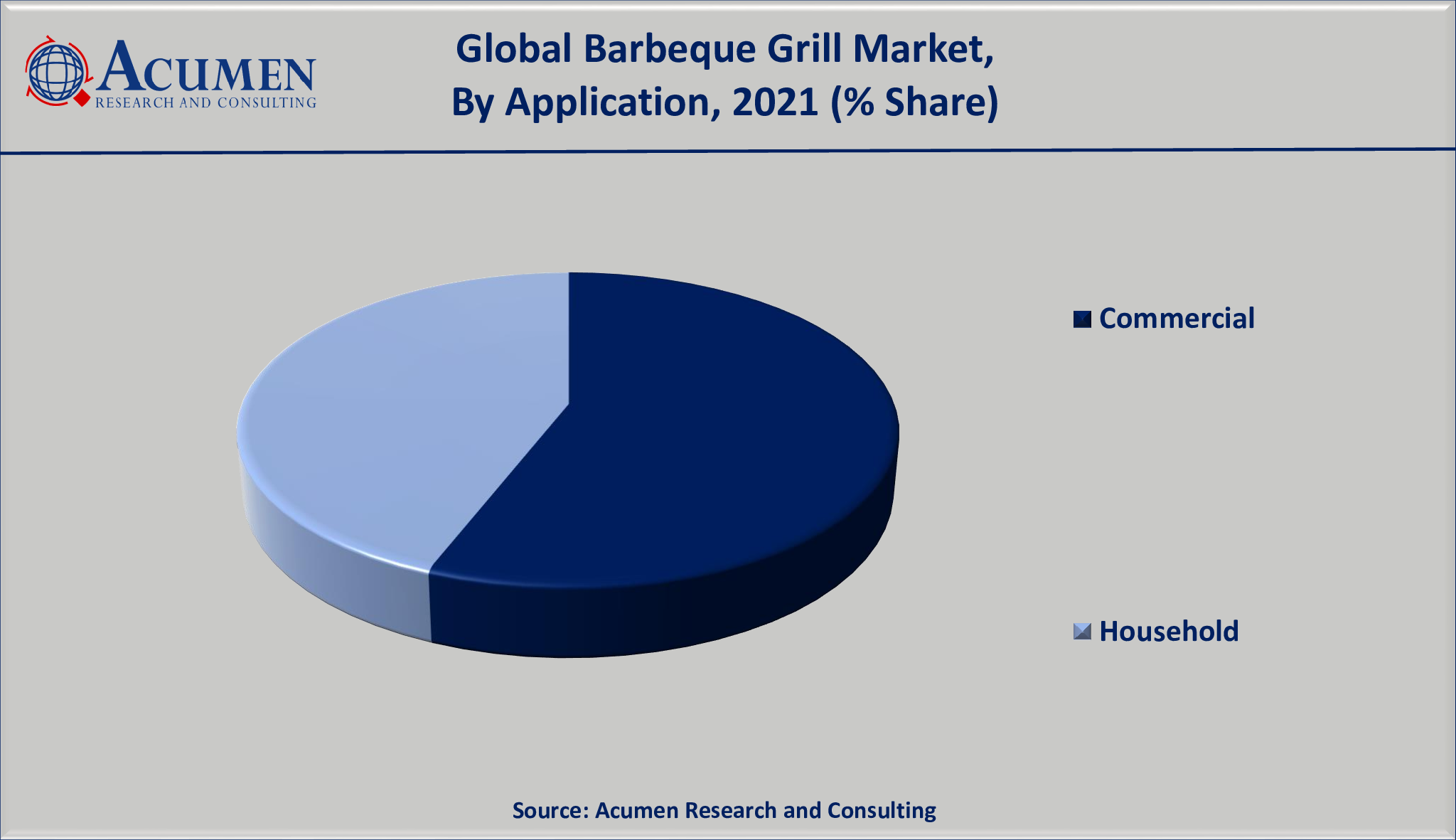 Commercial barbeque grills currently have a sizable barbeque grill market share in terms of connectivity. The sizable market share of commercial grills is owing to the increasing number of restaurants & hotels and a growing number of trekking and camping activities. In addition, the rising number of BBQ restaurants in emerging economies such as China, India, Mexico, Indonesia, and Brazil are supporting the commercial barbeque grill market growth. However, the household barbeque grills segment is anticipated to achieve the fastest growth rate in the coming years, due to the rising trend of backyard parties, increasing preference for home-cooked BBQ food, and the growing popularity of small tops and portable BBQ grills.

According to our barbeque grill market regional analysis, North America occupied the majority of the market share in 2021 and is likely to continue its trend throughout the forecasted timeframe from 2022 to 2030. According to a 2009 study by the Hearth, Patio, and Barbecue Association, 82% of American households have a grill, and the majority of owners use it all year. Friends and families gather around the grill for holidays, birthdays, and for sometimes no particular reason at all. The American grill is a cornerstone of everyday life, whether for massive gatherings or a party of one, with beef, poultry, pork, or vegetables.

The Asia-Pacific region, on the other hand, is expected to grow at the fastest rate during the forecast period. Increase in the number of electric grills, an increase in disposable income, and growing popularity in countries such as China, India, and Japan, among others.

How much was the estimated value of the global barbeque grill market in 2021?

The estimated value of global barbeque grill market in 2021 was accounted to be USD 5,407 Million.

What will be the projected CAGR for global barbeque grill market during forecast period of 2022 to 2030?

Which region held the dominating position in the global barbeque grill market?

North America held the dominating barbeque grill during the analysis period of 2022 to 2030.

Asia-Pacific region exhibited fastest growing CAGR for barbeque grill during the analysis period of 2022 to 2030.

What are the current trends and dynamics in the global barbeque grill market?

Growing food consumption across the world, rising meat-eating population, and increasing trend of cookout on holidays and weekends drives the growth of global barbeque grill market.

By Product segment, which sub-segment held the maximum share?

Based on product, gas segment held the maximum share barbeque grill market in 2021.