The Global Bentonite Market Size accounted for USD 1,796 Million in 2021 and is estimated to achieve a market size of USD 3,592 Million by 2030 growing at a CAGR of 8.2% from 2022 to 2030. The rapid expansion construction industry around the globe is expected to fuel the demand for bentonite market growth. Furthermore, growing organic farming as well as an increase in the number of water treatment facilities around the world is expected to drive the bentonite market value over the projection period. 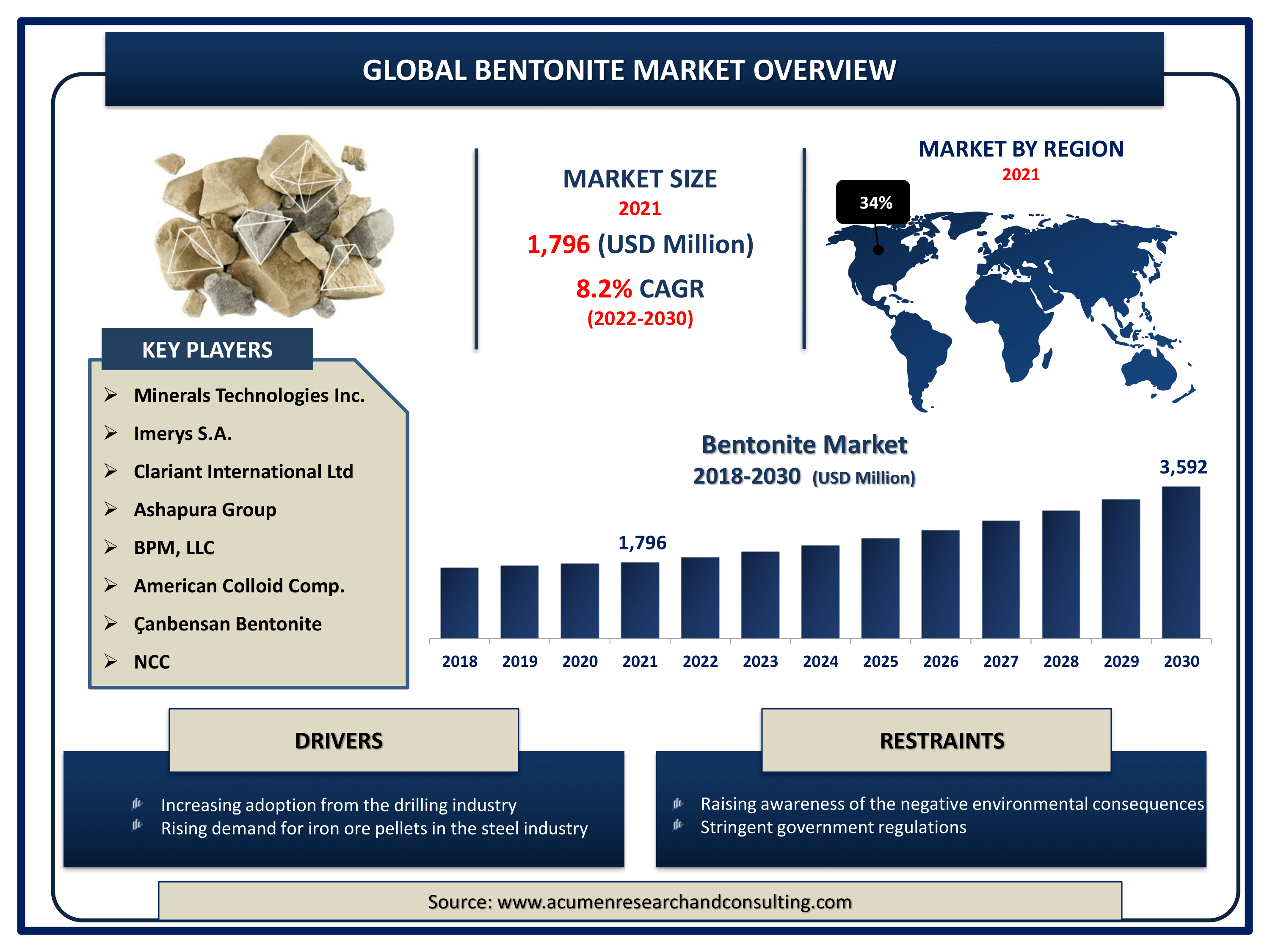 Bentonite is clay that is frequently formed from the alteration of volcanic ash and is composed primarily of smectite minerals, most commonly montmorillonite. Bentonite is used as a bonding agent in the preparation of molding sand for the manufacture of iron, steel, and non-ferrous casting. Furthermore, bentonite has strong colloidal properties, and when it comes into contact with water, its volume increases by multiple folds, resulting in a viscous and gelatinous fluid. Bentonite's unique properties of swelling, water absorption, hydration, thixotropy, and viscosity make it vital material for a number of applications.

According to a report published by the Industrial Minerals Association of North America, bentonite has traditionally been used in civil engineering applications due to its thixotropic properties, higher support, and lubricating properties to thick walls, particularly in tunneling applications. Furthermore, the absorption properties of bentonite are effective in wastewater treatment. Furthermore, bentonite is commonly used as a mud component in drilling oil and water wells. The role primarily entails sealing borehole walls, removing drill cuttings, and lubricating the cutting head. Bentonite is used in pharmaceuticals to absorb/adsorb functions that allow paste formation. These include calamine lotion, industrial protective creams, eczema anti-irritants, and wet compresses. Bentonite is also found in personal care products such as baby and face powders, sunburn paint, mud packs, and face creams. Such factors have a positive impact on the global bentonite market's growth.

Bentonite Has Wide Application For The Study Of Oenology, Stimulates The Growth Of Global Market

Bentonite is used in oenology to improve the clarity and stability of the wine, as well as to predict the formation of deposits in the bottle. Bentonite could be added to improve the precipitation of suspended solids in oenology. Furthermore, bentonite is primarily used in white wines, while in red wines; the goal of fining is softening, or removal of polyphenols and tannins to further develop the astringency of the wine. The primary benefits of bentonite are its inexpensive nature, effectiveness, and availability. Furthermore, the selection of the best bentonite is based on the characterization of its structural properties in order to optimize the performance of wine fining.

The worldwide bentonite market segmentation is based on the product type, application, and geography. 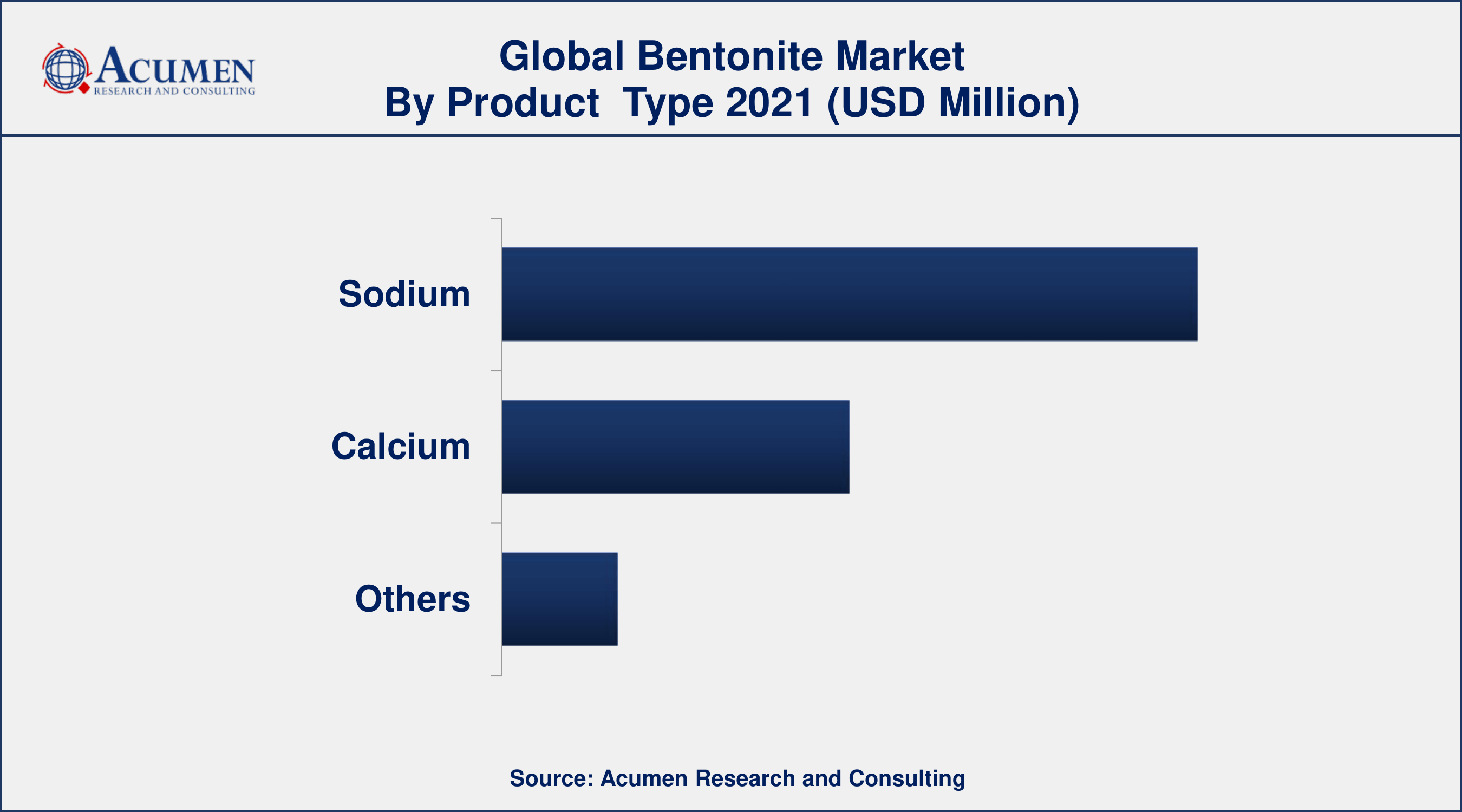 According to the bentonite market projection, the foundry sand segment was the strongest in 2021 and is expected to dominate the market over the forecast period. Foundry bentonite is primarily used as a bonding material in the preparation of molding sand for the manufacture of iron, steel, and nonferrous casting. Because of the unique properties of foundry sand bentonite, it produces green sand molds with good flow ability, compact ability, and thermal stability for the production of high-quality castings. Such factors fuel segmental growth, which in turn fuels the overall market growth.

North America has dominated the bentonite market in the past and is expected to do so again during the forecast period. According to the ENERGIE ATOMIQUE DU CANADA LIMITED report, bentonite production is high in North America provinces, as major residuals of bentonite were discovered in North American provinces. The Montana-type bentonite beds, for example, were the second major North American geological series containing economically significant quantities of sodium bentonite.

With past rationalization, there were five major bentonite producers in the United States and two small processing facilities in Western Canada. Furthermore, Canada has small production facilities that produce bentonite, which promotes regional growth. M-I Drilling Fluids, for example, owns a small processing facility in Alberta, Canada. This plant extracts sodium bentonite from the Upper Cretaceous Bearpaw formation. Such factors have a positive impact on regional growth, ultimately benefiting the overall market.

On the other hand, Asia-Pacific had the fastest-growing CAGR in the bentonite market. The rising construction industry is one of the key factors driving bentonite growth in the Asia-Pacific market, contributing to overall market growth.

What is the size of global bentonite market in 2021?

The estimated value of global bentonite market in 2021 was accounted to be USD 1,796 Million.

What is the CAGR of global bentonite market during forecast period of 2022 to 2030?

Which region held the dominating position in the global bentonite market?

North America held the dominating bentonite during the analysis period of 2022 to 2030.

Asia-Pacific region exhibited fastest growing CAGR for bentonite during the analysis period of 2022 to 2030.

What are the current trends and dynamics in the global bentonite market?

Increasing adoption from the drilling sector and rising demand for iron ore pellets in the steel industry drives the growth of global bentonite market.

By product type segment, which sub-segment held the maximum share?

Based on product type, sodium segment is expected to hold the maximum share of the bentonite market.