Benzene is a colorless or light-yellow liquid at room temperature having a pleasant odor and is extremely flammable. Benzene evaporates quickly into the air and its vapor being heavier than air can sink to the ground in low-lying areas. It is a critical feedstock for the production of various chemicals, which are then used in a variety of industries including building and construction, textile, electrical and electronics, and automotive. 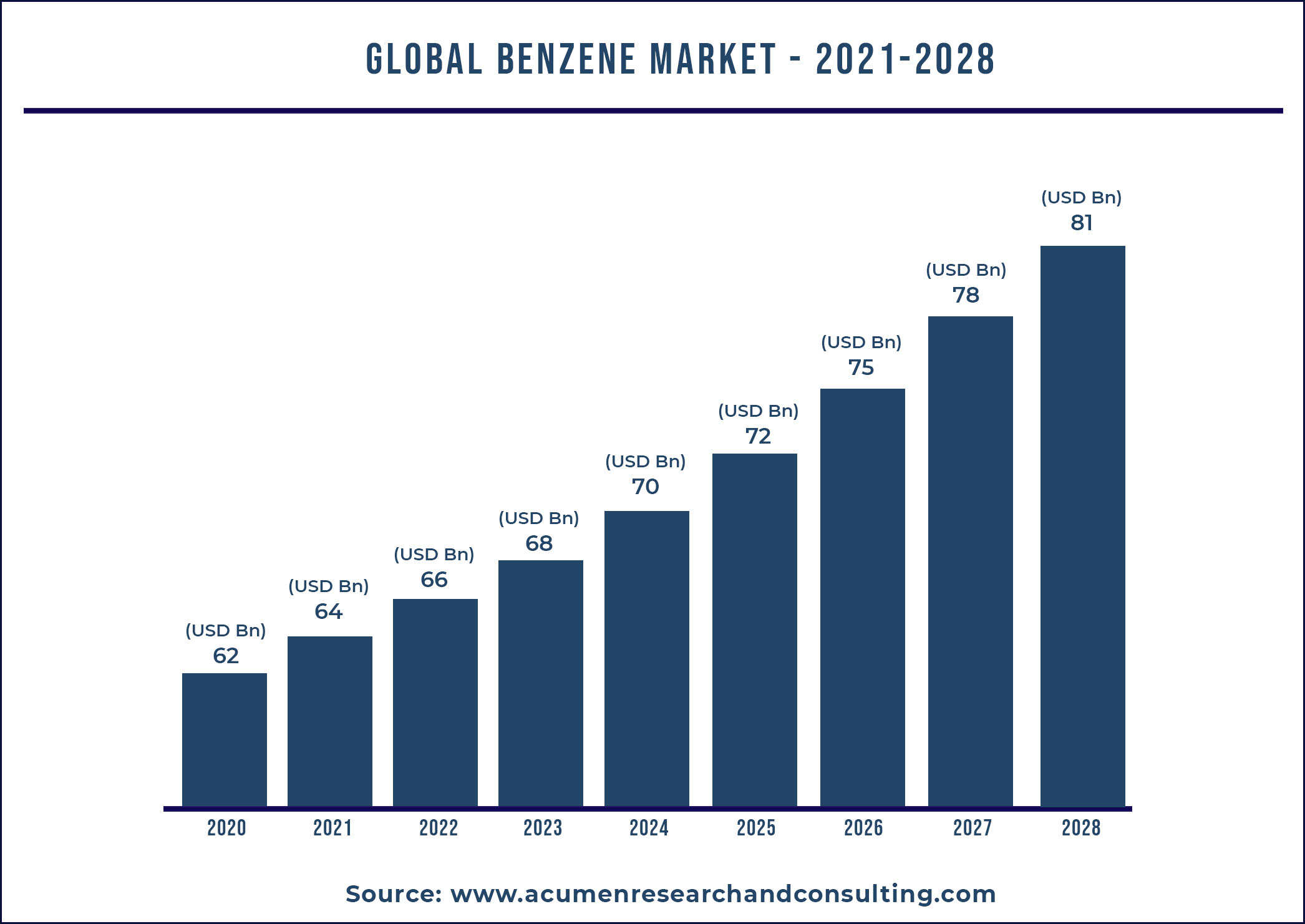 Benzene is produced by both natural and human processes. Volcanoes and forest fires are natural sources of benzene while it is also found in natural sources such as crude oil, gasoline, and cigarette smoke. In the United States, benzene is widely used. It is one of the top 20 chemicals in terms of production volume. Some industries use benzene to create other chemicals, such as plastics, resins, nylon, and synthetic fibers. Benzene is also used in the production of some lubricants, rubbers, dyes, detergents, drugs, and pesticides

Benzene demand in the global market has increased due to increased consumption of Benzene derivatives in the automotive industry for the production of synthetic rubber. Furthermore, an increase in the demand for polyester is a critical factor driving market growth, as is an increase in crude oil production, low feedstock costs, and an economical commodity product. Among the major factors driving the benzene market in Asia-Pacific are an increase in phenol consumption and an increase in demand for methylene diphenyl diisocyanate. The rising demand for Cumene to produce acetone for use in the automotive and architectural industries is also propelling the global benzene market forward.

Health effects of exposure to benzene

Human benzene exposure has been linked to a number of short- and long-term negative health effects and disorders, including cancer and aplastic anemia. Exposure can occur both at work and at home as a result of the widespread use of benzene-containing petroleum products such as motor fuels and solvents. Because benzene is highly volatile, most exposure occurs through inhalation. However, raised public awareness regarding sources of exposure to benzene and risk mitigation measures and continuous educational activities to discourage the use of benzene or petrol for cleaning and degreasing in industry and domestically are major concern of organizations. Such factors are hampering the growth of global benzene market.

Based on the applications, the plastics segment holds the largest market shares in 2020. Benzene is primarily used as a feedstock, or raw material to make other industrial chemicals, such as ethylbenzene, cumene and cyclohexane, which are then reacted and used in the manufacture of a variety of materials and plastics such as polystyrene, ABS, and nylon. Benzene is also used as a solvent in the chemical and pharmaceutical industries. 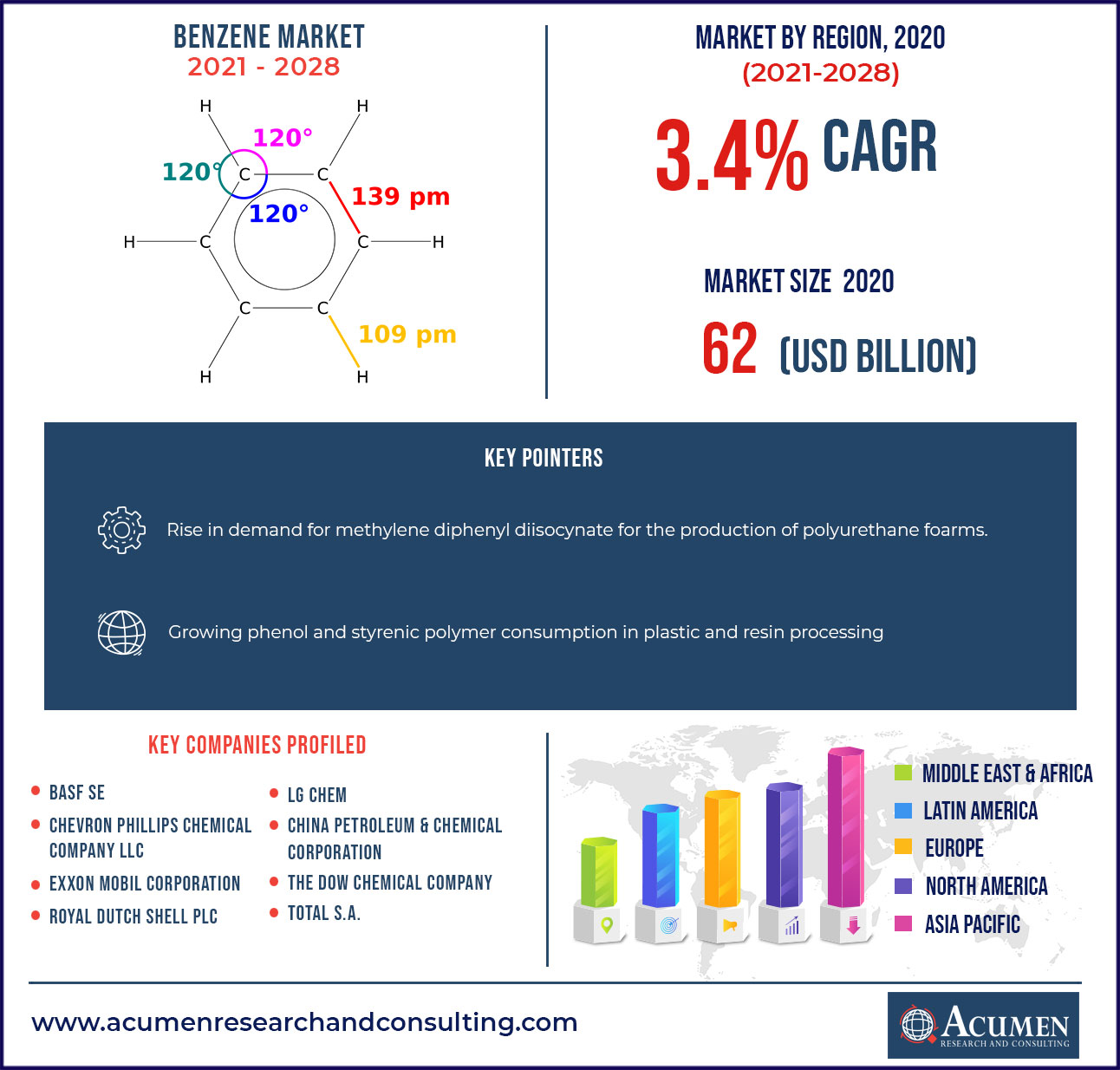 The Asia-Pacific region consumes the most benzene. It is also expected to be the fastest growing market due to rising demand from end users such as packaging, construction, and electronics, and home appliances, all of which increase demand for styrene. Because of the increased use of plastic in automotive applications and the growing use of polyurethane foams in the furniture industry, China is the leading producer and consumer in Asia-Pacific. Moreover, an increase in pygas production and gasoline consumption will further spur the demand for benzene in the key Asia Pacific region. Benzene is a plentiful commodity, and it served as one of the low-cost feedstocks fueling the burgeoning petrochemicals industry in Asia's developing economies.

How much was the estimated value of the global Benzene market in 2020?

The estimated value of global Benzene market in 2020 was accounted to be US $ 62 Mn.

What will be the projected CAGR for global Benzene market during forecast period of 2021 to 2028?

Which region held the dominating position in the global Benzene market?

What are the current trends and dynamics in the global Benzene market?

Rising demand for polyster, low cost of feedstock, and economical commodity product are the prominent factors that fuel the growth of global Benzene market

By segment Applications, which sub-segment held the maximum share?

Based on Derivatives, Ethylbenzene segment held the maximum share for Benzene market in 2020