A biometric sensor is a device that measures biometric data such as fingerprints, iris scans, or facial recognition. Fingerprints, faces, iris, voice, and body odor are examples of biometric sensors that measure and analyze an individual's physical and behavioral characteristics. These characteristics can be used for identification and authentication because they are unique to each individual and difficult to replicate. Biometric data protection, privacy, and security concerns have recently gained traction, thanks to the development of new regulations and standards such as GDPR, and businesses are implementing new methods to keep biometric data secure and private. 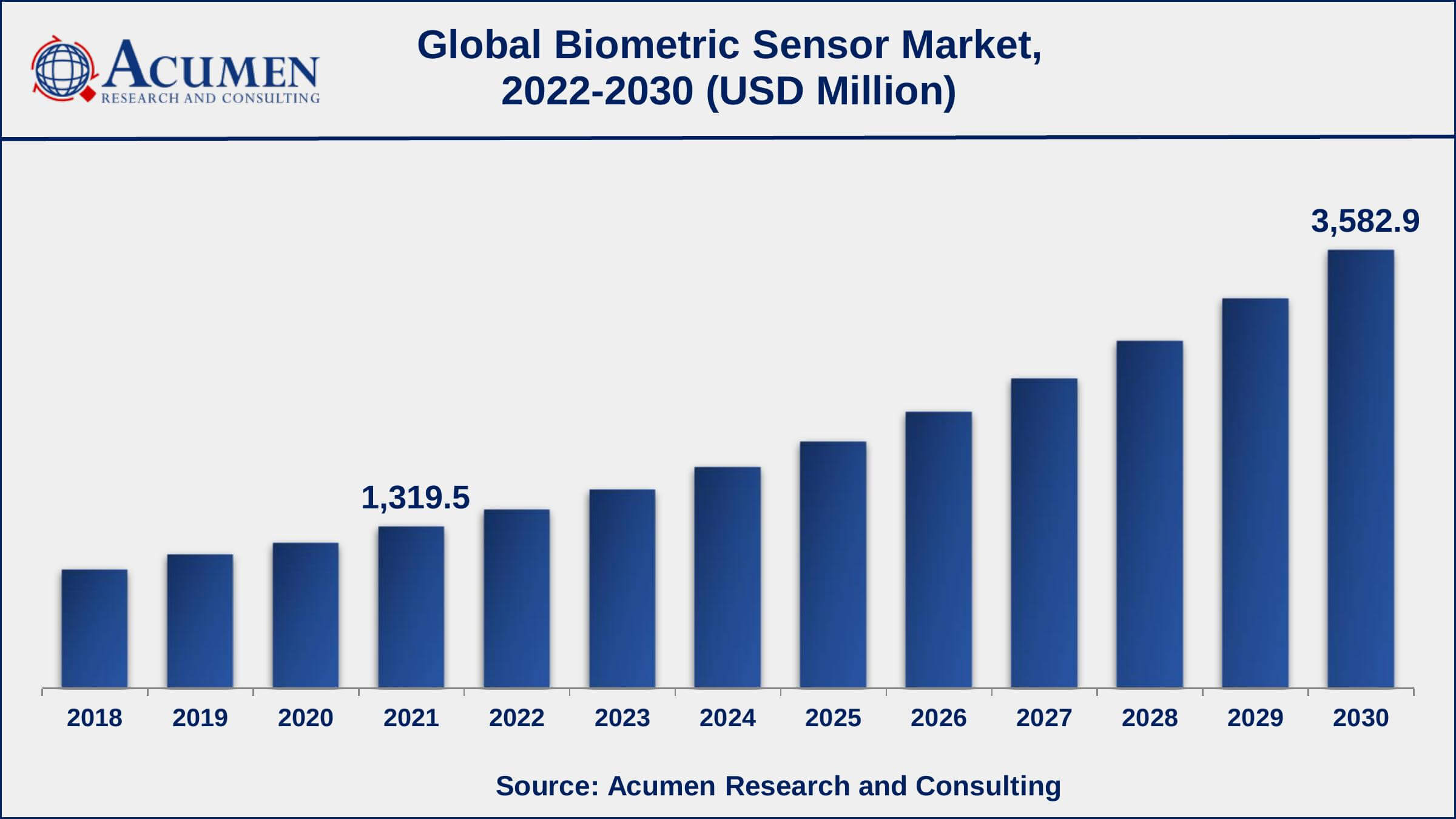 The rising demand for security is a major factor propelling the global biometric sensor market. Because of the increasing number of data breaches and cyberattacks, there is a greater need for secure authentication methods, making biometric sensors an appealing option. A growing number of government initiatives are fueling the growth of the biometric sensors industry. Governments around the world are implementing biometric technology in a variety of applications, including border security, national ID programmes, and criminal identification, fueling market growth.

Increasing adoption of biometric sensors in the financial and healthcare sectors is expected to create significant opportunities for the market between 2022 and 2030. Biometric sensor technology, for example, is increasingly being used in the financial sector for secure transactions, as well as in the healthcare sector for patient identification and access to medical records. Furthermore, rising smartphone and other mobile device adoption would provide significant traction for market growth. Biometric sensors, such as fingerprint and facial recognition, are increasingly being integrated into smartphones and other mobile devices, resulting in increased technology adoption. Furthermore, the advancement of AI and machine learning technology is assisting the biometric sensor market to expand in various industry verticals due to their efficiency. The integration of AI and machine learning technology with biometric sensor technology is also propelling market growth, as it enables more accurate and efficient identification and authentication.

However, the biosensor market is constrained by factors such as concerns about privacy and data theft, high implementation costs, technical limitations, and a lack of standardization. The use of biometric sensor technology, for example, raises privacy concerns because it involves the collection, storage, and use of personal information. These concerns have resulted in the creation of new regulations and standards to protect personal data, but they can also act as a barrier to adoption. Furthermore, biometric sensor technology can be costly to implement, especially for large-scale applications, which can be a barrier for some organizations.

The worldwide biometric sensors market is categorized based on product, application, end-use, and geography. 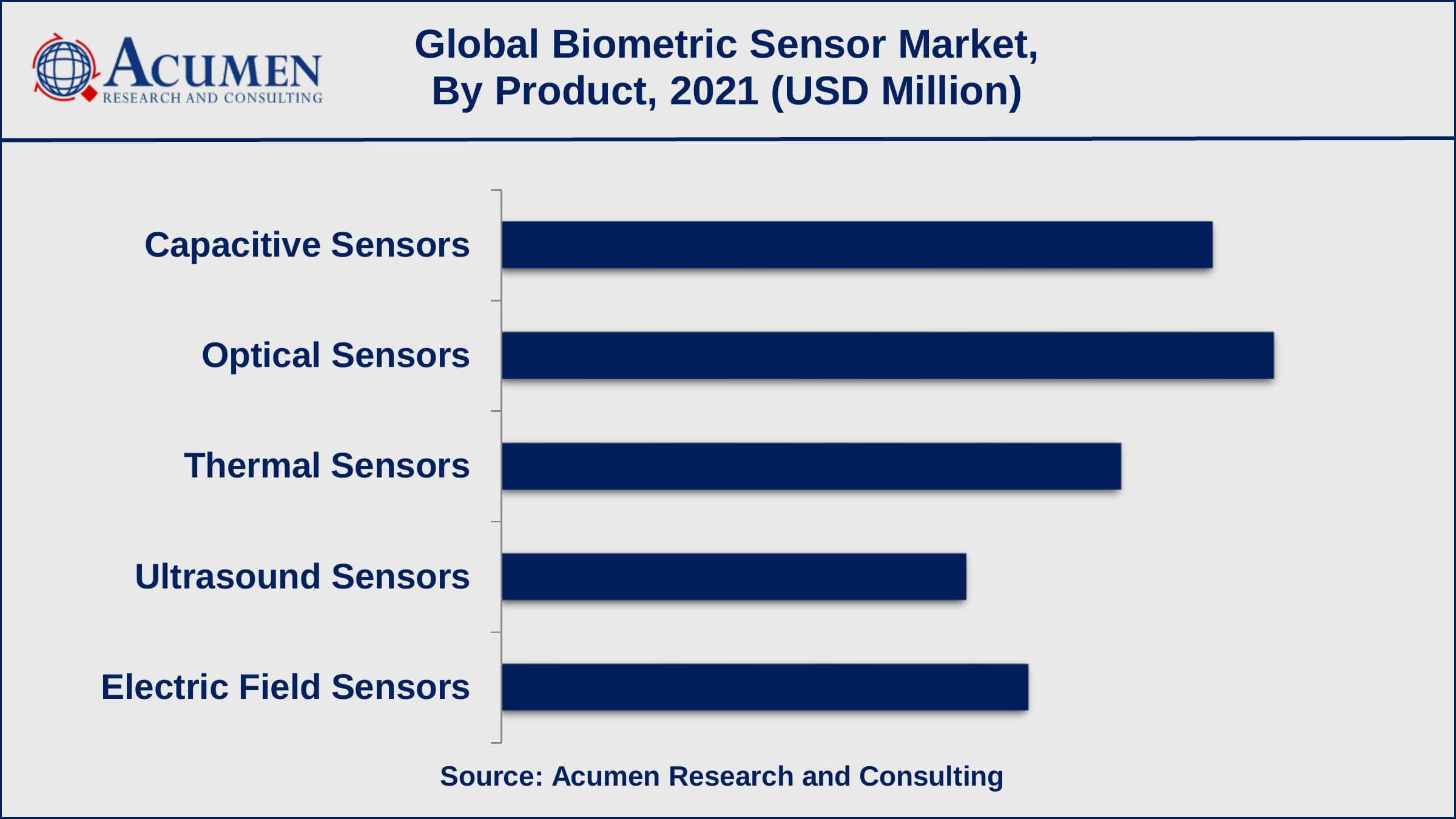 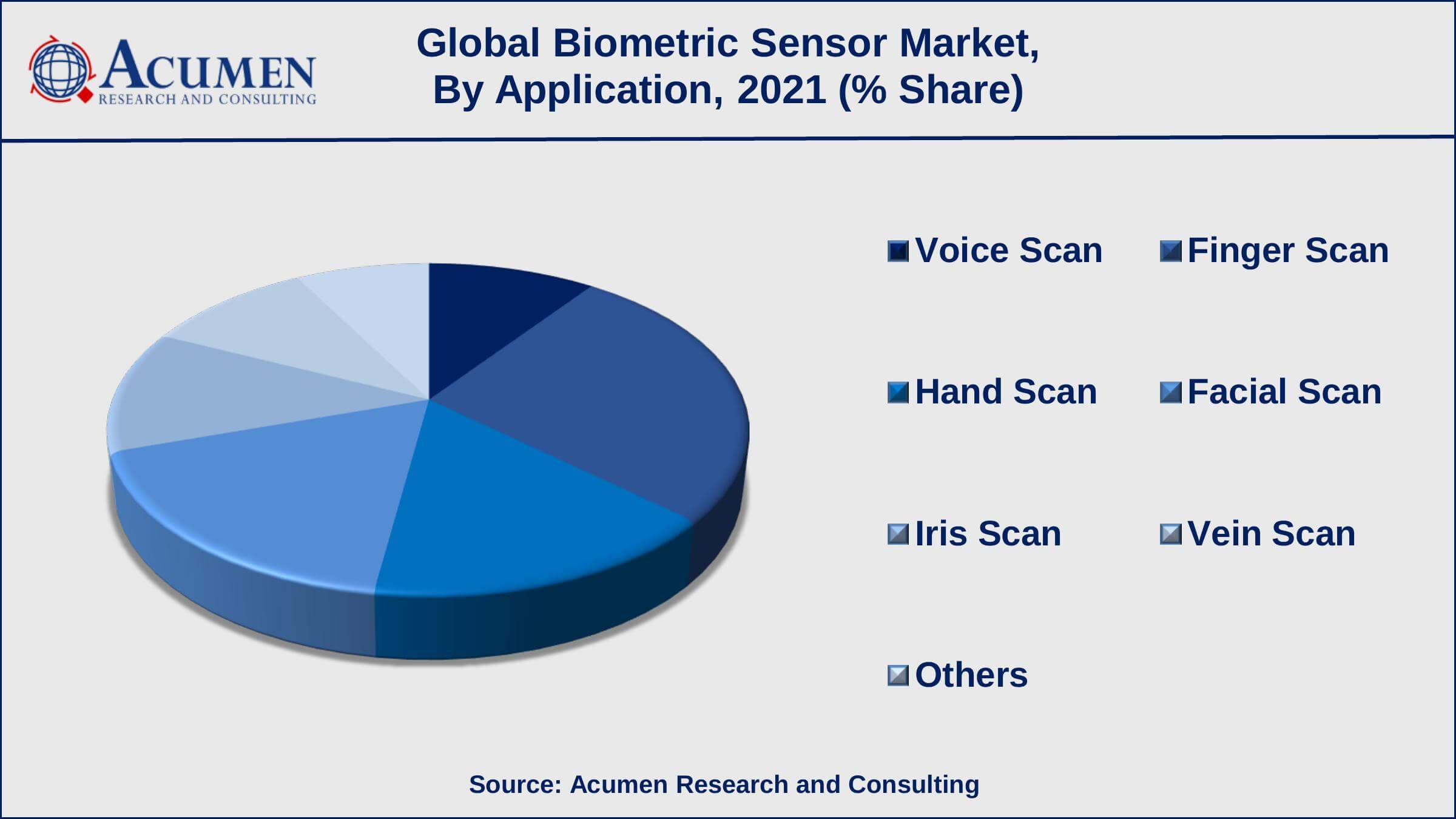 Based on application, the finger scan sub-segment generated the most revenue in 2021 and is expected to continue to do so in the coming years. One of the most mature and widely used biometric technologies is fingerprint recognition technology, also known as fingerprint scanning or fingerprint biometrics. The market for finger scan biometric sensors is expanding as these sensors are increasingly used in applications such as security and surveillance, access control, and mobile devices. Advances in technology have made fingerprint recognition more accurate, reliable, and simple to use, making it more appealing for use in a variety of industries.

North America generated the maximum market share and is expected to do so in the coming years due to the presence of key players and the high adoption of biometric technology in various application areas such as government, financial, and healthcare. In addition, Europe is also expected to have a significant market share due to the adoption of biometric technology in various industries and the presence of stringent regulations and data protection policies. On the other hand, Asia-Pacific region is anticipated to attain fastest growth rate during the forecasted years from 2022 to 2030. Growing commercial building projects, rising smartphone and smartwatch adoption, and rising private and public investments in hospital and research lab development are some of the factors driving the APAC biometric sensors market.

What was the market size of the global biometric sensors in 2021?

What is the CAGR of the global biometric sensors market during forecast period of 2022 to 2030?

Which region held the dominating position in the global biometric sensors market?

North America held the dominating position in biometric sensors market during the analysis period of 2022 to 2030.

Asia-Pacific region exhibited fastest growing CAGR for biometric sensors market during the analysis period of 2022 to 2030.

What are the current trends and dynamics in the global biometric sensors market?

The current trends and dynamics in the biometric sensors industry include growing demand for security, increase in number of government initiatives, and rising number of frauds and illegal activities.