Cryptocurrency adoption is on the rise; thus it stands to reason that the next phase would include Bitcoin ATMs or crypto ATMs. A cryptocurrency ATM is a device that enables consumers to purchase cryptocurrencies with cash and a credit or debit card. Some are bidirectional, allowing for the exchange of virtual currency for cash. The usage of an ATM to securely transfer cryptocurrencies is referred to as a crypto ATM. A cryptocurrency is a form of payment that is distinct from cash, checks, and credit cards. In cryptocurrency, the user transmits money without having to deal with a bank.

A crypto ATM is a type of ATM that allows people to effortlessly transfer cryptocurrencies through the use of a machine. To buy cryptocurrency using a crypto ATM, the user must first go through KYC, then enter the address of the virtual wallet into which they want to deposit money, and then insert the order money into the crypto ATM, and finally complete the transaction. For security considerations, these receipts include symmetric encryption in the form of QR codes. However, the widespread use of digital funds transfer has resulted in the implementation of Crypto ATMs over the projection period. 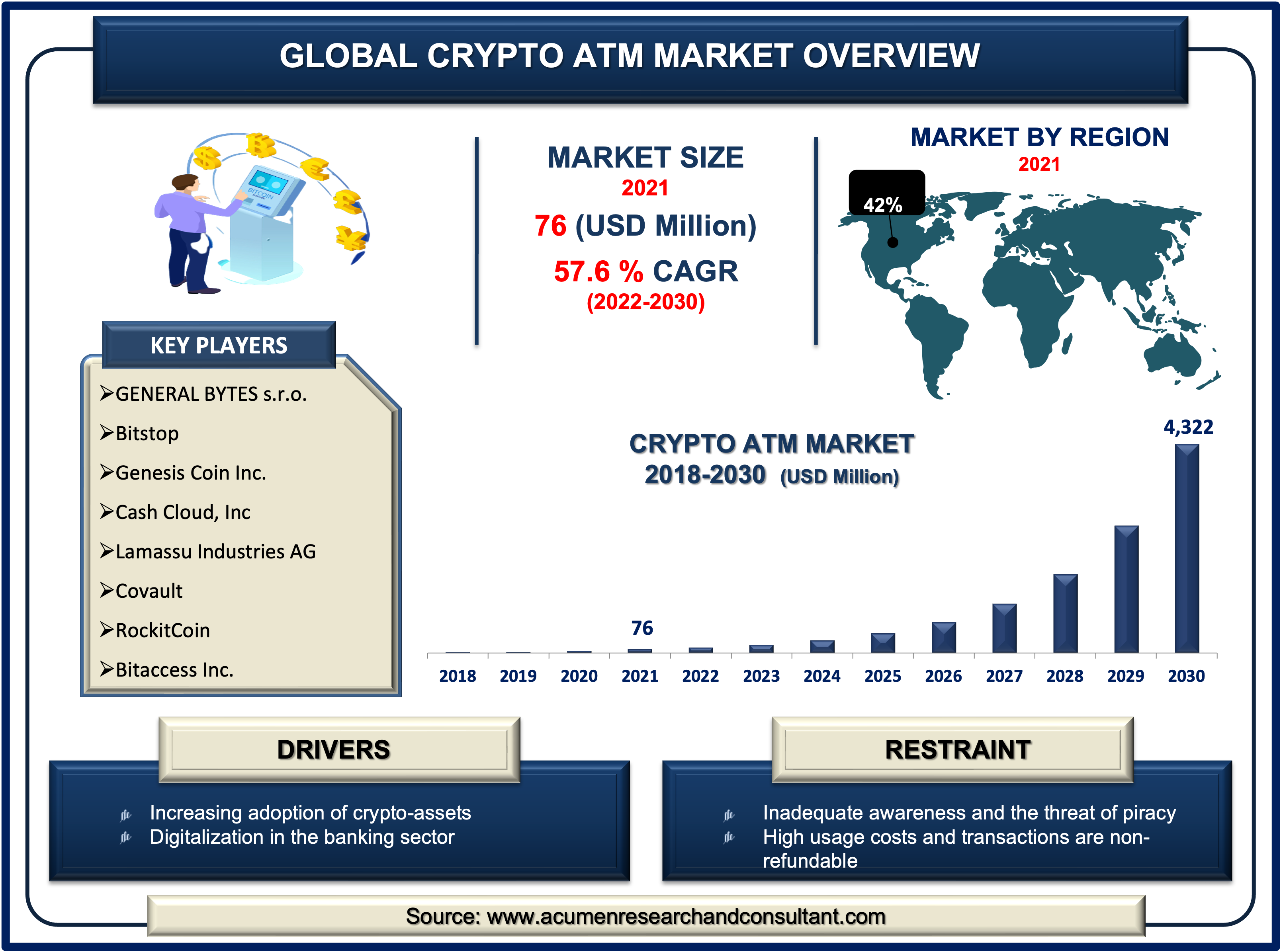 ·         The rising popularity of cryptocurrency mining

·         Inadequate awareness and the threat of piracy

·         High usage costs and transactions that are non-refundable

·         Initiatives by the government to promote cryptocurrency adoption

·         Increase in the number of transaction mediums

The ongoing deployment of Crypto ATMs in hotels, cafes, and supermarkets, among other locations, propels the Crypto ATM Market ahead. Furthermore, with the growing acceptance of cryptocurrency within organizations, adoption, and demand for Crypto ATMs are likely to drive market expansion throughout the forecast period. However, the growing popularity of cryptocurrencies is also assisting the market's growth. Furthermore, increasing ATM installations in the hospitality and tourism industry, as well as evolving financial regulations, is assisting in the growth of the crypto automated teller machine (ATM) market. In addition, the increasing global prevalence of smartphones is one of the major factors driving market expansion. Smartphones allow cryptocurrency users to easily use the features of crypto ATMs. Besides this, a lack of knowledge and technical competence will stymie market expansion over the predicted period.

Based on the offering, the hardware segment held the greatest market share in 2021. In the past few years, the hardware category has had the biggest market share and has been the most productive. Cryptographic ATM manufacturers need a diverse set of hardware components to build these devices. Hardware components include door locks, ATM stands, cash recyclers, extension boxes, cash dispensers, and cash boxes. Aside from that, the growing number of investors, consumer awareness of cryptocurrency coins, and the increasing installation of crypto ATMs are boosting demand for crypto ATM manufacturing, propelling the hardware segment forward.

In terms of coin type, the bitcoin segment will dominate the global market in 2021. Despite the global epidemic causing havoc on all major economies on the planet, the cryptocurrency sector has continued to thrive. Cryptocurrencies, particularly Bitcoin, are now regarded as a safe-haven asset in the face of market instability and volatility. The widespread popularity of bitcoin as a mode of financing around the world is boosting demand for bitcoin ATMs. Bitcoin is the most widely used digital currency on the market. According to a 2017 analysis published by Deutsche Bank AG, bitcoin is one of the most widely used virtual currencies and will continue to influence in the coming years. The value of BitCoin as a means of payment drives the majority of its demand.

The North American Crypto Atm Market is estimated to account for the largest share in 2021. The United States is driving market expansion in this region since it has the largest network operators of hardware and software used in the creation of Crypto ATMs. The United States has a favorable investment environment, with no legal impediments and a plethora of Crypto Atm hardware and software providers. Additionally, The Mexican government declared Bitcoin lawful in 2017, and it will be managed under FinTech legislation. Furthermore, there has been a boom in startup activity in Canada, particularly in the bitcoin sector. These factors are propelling the market in North America. Besides that, North America is home to several key market players, like Bitcoin Depot, Coin Cloud, and CoinFlip, and the deployment of crypto ATMs in public areas is gaining pace in North America, notably in the United States.

How much was the estimated value of the global crypto ATM market in 2021?

The estimated value of global crypto ATM market in 2021 was accounted to be US$ 76 Mn.

What will be the projected CAGR for global crypto ATM market during forecast period of 2022 to 2030?

Which region held the dominating position in the global Crypto ATM market?

North America held the dominating share for crypto ATM during the analysis period of 2022 to 2030.

Asia-Pacific region exhibited fastest growing CAGR for crypto ATM during the analysis period of 2022 to 2030.

What are the current trends and dynamics in the global crypto ATM market?

The rising popularity of crypto currency mining, increasing adoption of crypto-assets, and digitalization in the banking sector are the prominent factors that fuel the growth of global crypto ATM market.

Based on type, one way segment held the maximum share for crypto ATM market in 2021.