Cultured meat also known as (cultivated meat, artificial, in vitro, or lab-grown meat), is real animal meat (including fish and organ meats) that is grown from animal cells. Cultured meat is promoted as a good alternative for customers who want to be more responsible but do not want to modify their diet. Thus,to meet the growing need for food by the growing human population many players have started developing cultured meat. According to the statistics, more than 50 companies were operating globally by the end of 2019. Cultured muscle cells, unlike regular beef, may be safer because they lack any nearby digestive organs.The goal is to make the meat industry more environmentally friendly and humane. 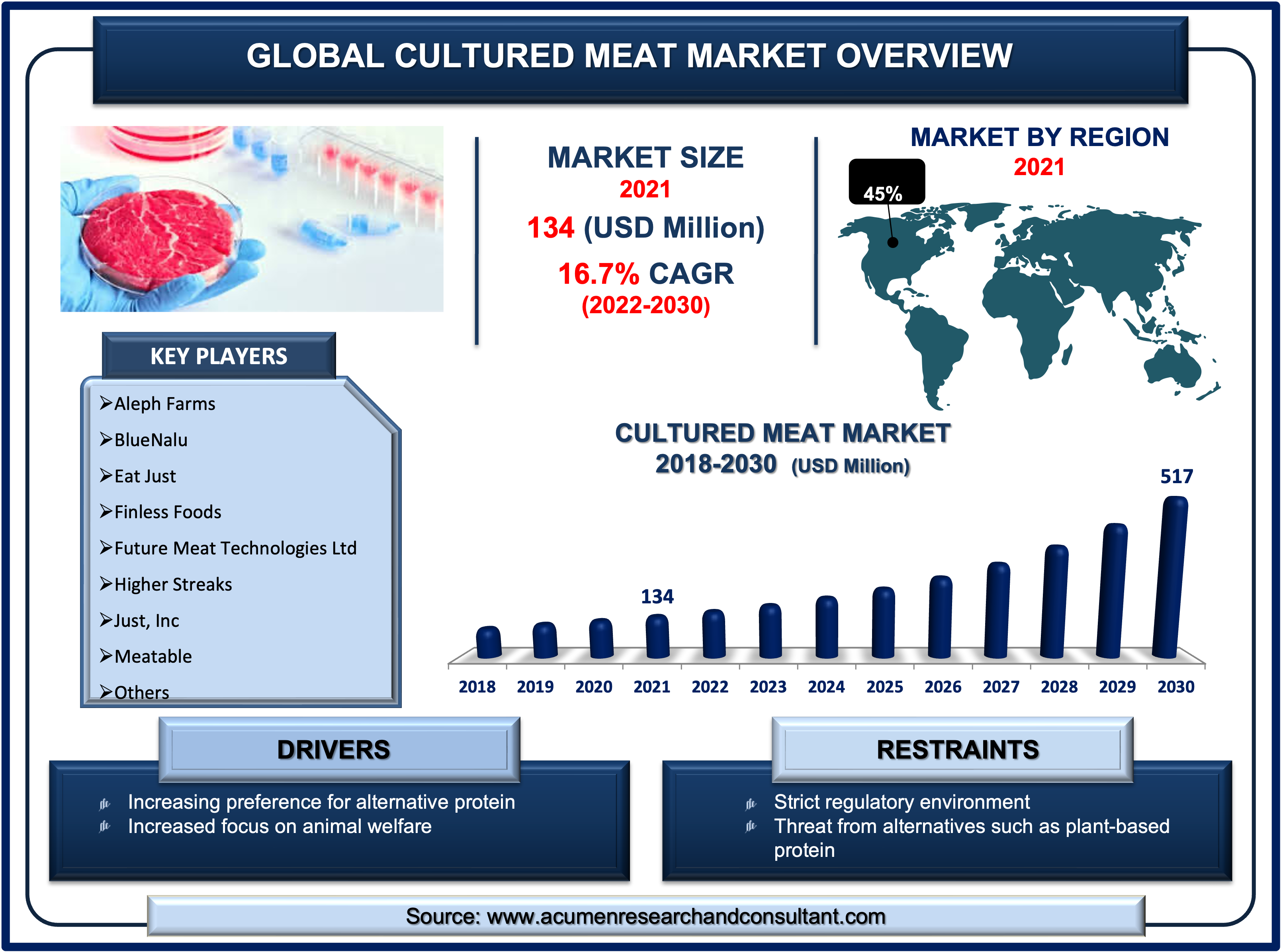 The increased preference for alternative protein and enhanced food safety are the leading factors that are driving the global cultured meat market. Alternative proteins are safe for human health as they consist of a very less amount of fats. The Center for Disease Control and Prevention (CDC) states that more than 35,000 people die every year due to antibiotic resistance alone in the US. Therefore, according to the latest research, one in four Americans reported eating less meat than they had previously. Additionally, consumption of cultured meat will lead to less animal cruelty. According to estimations, 50 billion chickens, 1.5 billion pigs, and half a billion sheep are the annual numbers of animals bred and slaughtered for human consumption.

Although lab-grown meat is currently more expensive than its alternatives, the cost will gradually decrease in the next years as the number of clean meat customers grows.Many elements will influence consumer acceptance, and consumers appear to dislike artificial foods. As there is relatively less awareness among consumers regarding lab-grown meat, the demand would be stable during the initial periodespecially in emerging countries.

However, the strict regulatory environment for the production of cultured meat and significant threat from alternatives such as plant-based meat are some of the key aspects that are hampering the market growth. Cell-cultured products will soon be available on the market, and the FDA and USDA will need to move fast to establish a framework with which businesses can work. The popularity of plant-based meat substitutes such as the Impossible Burger and Beyond Burger shows that omnivores are prepared to choose items that replicate the flavor and feel of traditional, animal-based meat. Thus, these factors are acting as a roadblock for the market. On the other hand, the rising investments from key players and tremendous growth potential from emerging economies are the factors that are expected to generate numerous growth opportunities for the market in the coming years.

The global cultured meat market is segmented based onsource, end-use, and geography.

Among them, the poultry segment held the largest market share in 2021. Poultry products are consumed by a high population base, due to their inexpensiveness and easy availability. In addition, the growing popularity of poultry products in quick-service restaurants (QSRs) and increasing demand for chicken meat due to the rapidly growing urban population in emerging economies are anticipated to boost the demand for poultry products.

Based on end-use, the nuggets segment is expected to lead the market with a significant share. Nuggets are one of the most common form that chicken meat is consumed all over the world. Consumers are seeking for solutions that are quick to eat at any time, thanks to the growing popularity of on-the-go lifestyles and snacking goods, notably in the United States.Furthermore, Singapore became the first country to approve cultured chicken nuggets by the end of 2020, contributing to an optimistic outlook for the future.

The paradigm shift of consumers towards alternative meat products in the North Americaregion, fuels the regional market growth 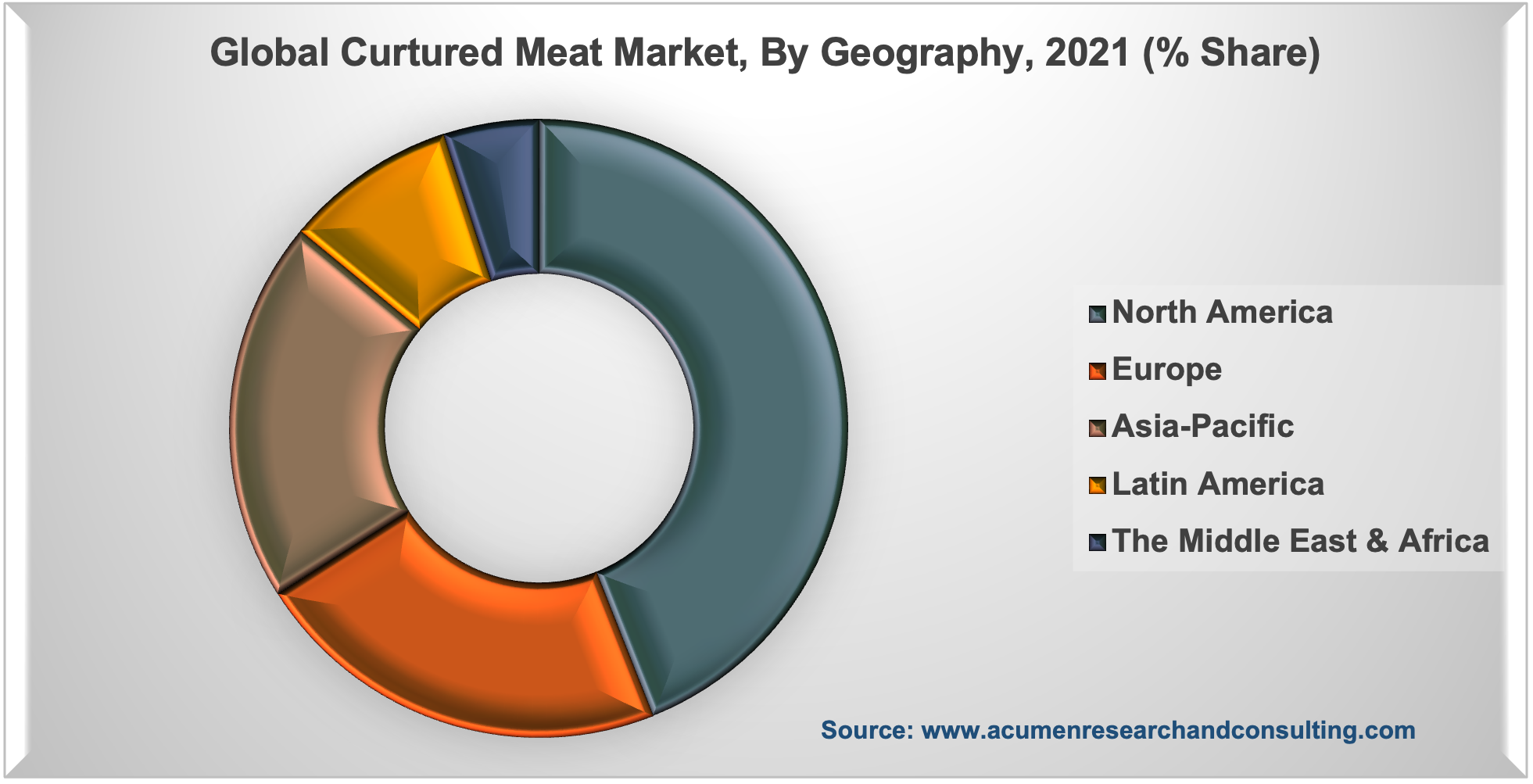 The regional segmentation is given as North America, Latin America, Asia-Pacific, Europe, and the Middle East & Africa (MEA). Based on regional analysis, the North America region occupied the maximum market share in 2021. The region's supremacy can be ascribed to the growing need for alternatives to animal-based goods, as well as the rapid expansion of online food delivery, which is increasing the demand for cultured meat. In addition to that, research and development are expected to expand, with increased investment in efficient R&D being the most crucial component for regional growth. Moreover, the openness and acceptance of meat substitutes in the US and Canada are also supporting the market growth. Finally, the Asia-Pacific region is likely to attain the fastest growth rate throughout the forecast period 2022 – 2030. The rising meat and meat product consumption in countries such as China, India, Singapore, Japan, and South Korea is expected to surge the demand for cultured meat products in the region.

How much was the estimated value of the global cultured meat market in 2021?

The estimated value of global cultured meat market in 2021 was accounted to be US$134Bn.

What will be the projected CAGR for global cultured meat market during forecast period of 2022 to 2030?

Which region held the dominating position in the global cultured meat market?

North America held the dominating share for cultured meat during the analysis period of 2022 to 2030.

Asia-Pacific region exhibited fastest growing CAGR for cultured meat during the analysis period of 2022 to 2030.

What are the current trends and dynamics in the global cultured meat market?

Increasing preference for alternative protein, technological enhancements in the cellular culture, and increased focus on animal welfare all contribute to the expansion of the worldwide cultured meat market.

Based on source, poultry segment held the maximum share for cultured meat market in 2021.