The Global Data Center Power Market Size accounted for USD 9,354 Million in 2021 and is estimated to achieve a market size of USD 17,137 Million by 2030 growing at a CAGR of 7.2% from 2022 to 2030. The development of digital infrastructure caused by increased digitization and modernization is expected to influence the direction of the data center power market growth. Furthermore, the rise in the implementation of innovative technologies to reduce power consumption, combined with the creation of modular data centers, is likely to drive the data center power market value. 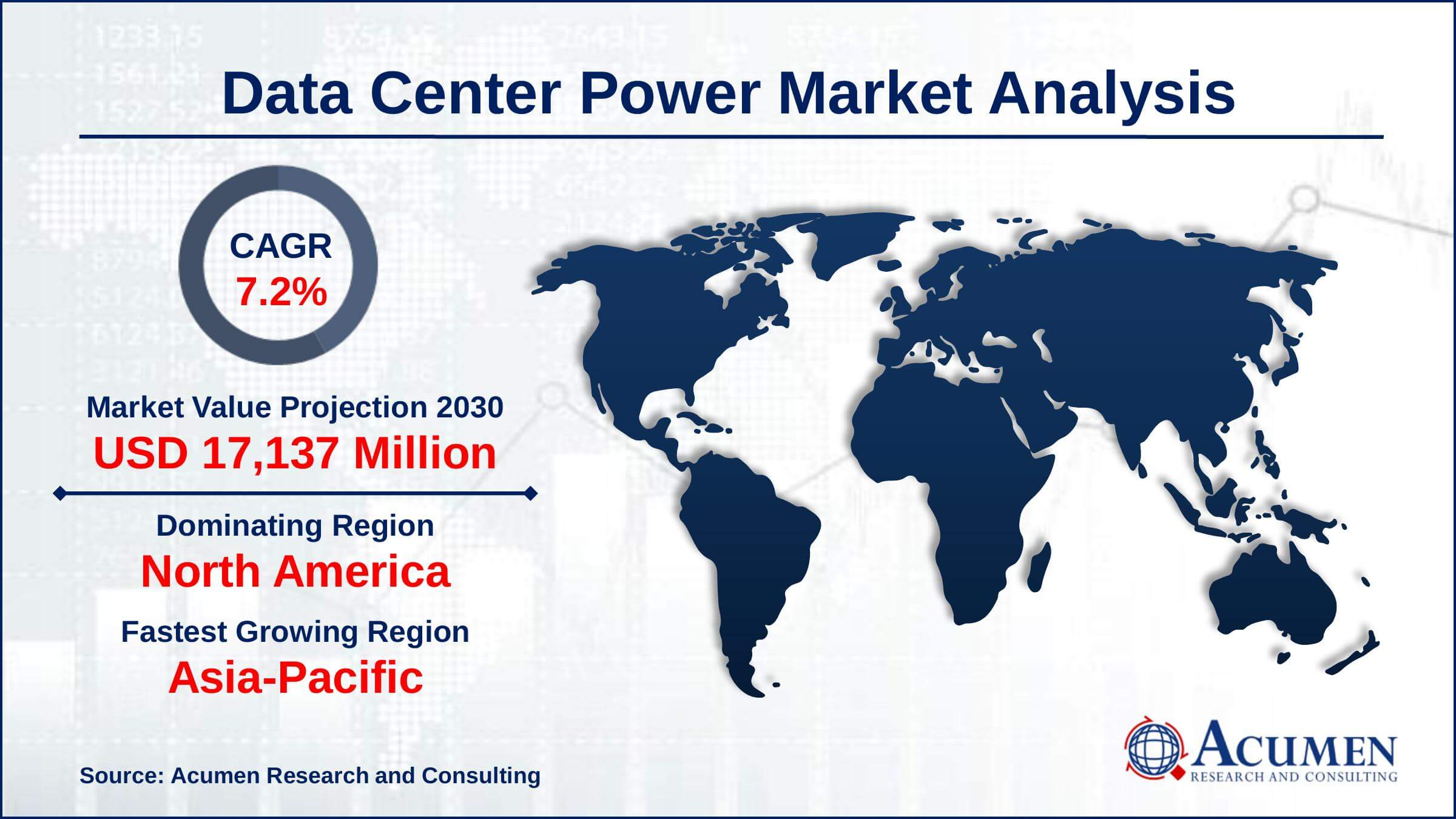 A data center is a self-contained physical unit that contains computing infrastructure such as processors as well as various components such as networks, telecommunications, & storage systems. Every entity that generates or uses data, including governments, educational institutions, financial institutions, retailers of all sizes, providers of digital data, networking websites, and many others, has some need for data centers. Every data center will almost certainly utilize both alternating current (AC) & direct current (DC) electricity because AC is frequently switched to DC either vice versa. 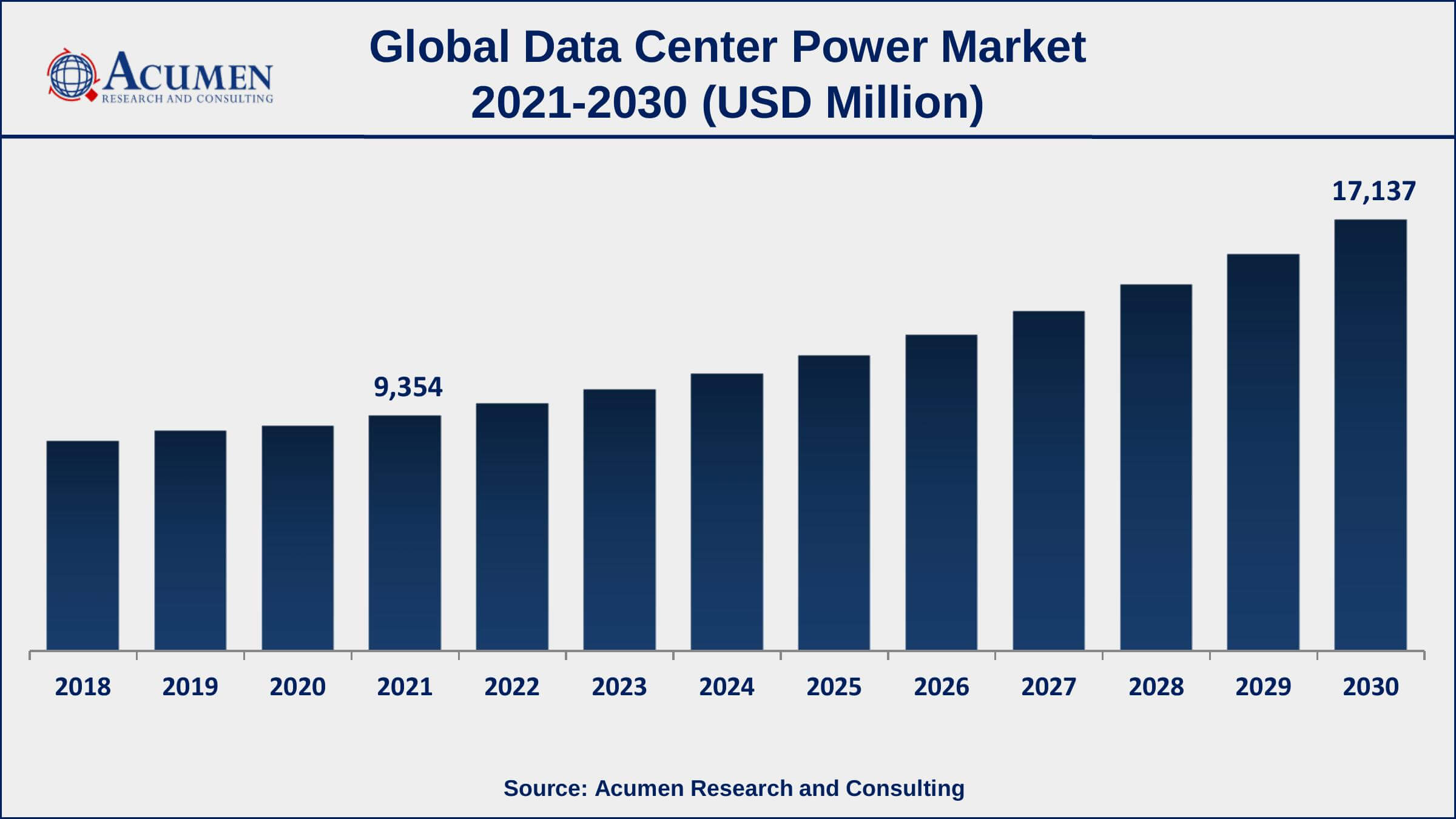 A significant amount of power is required by data centers for the management, optimization, and monitoring of data. Modern data centers use smart UPS systems, and intelligent power distribution systems to efficiently face power outages and acquire an uninterrupted supply of power. UPS systems are used in data centers for the efficient functioning of servers and other networking devices. In case of power fluctuations, low-voltage electricity is passed through the UPS system to provide short-term power during the failure of the input power source. The primary function of UPS and other power solutions is to protect data center components against voltage spikes, harmonic distortion, and other power problems.

The major factors driving the growth of the global data center power market include rapid growth in enterprise data generation, the significant rise in power consumption in data centers, and the need for decreased operational expenses in enterprises. The increasing digitization and growing adoption of cloud computing, coupled with growth in the number of data centers worldwide support the data center power market growth. The increasing development of IT infrastructure and rising construction of hyper-scale facilities has accelerated the growth of the data center power market. The growing demand for edge facilities further supports the market growth. The rising adoption of modular power infrastructure, growth in rack power density of facilities, and rising consumption of power are factors expected to drive market growth during the forecast period. The growing demand from emerging economies, technological advancements, and rising implementation of automation and monitoring solutions are factors expected to provide numerous growth opportunities in the coming years.

The global data center power market segmentation is based on component, end-user, and geography. 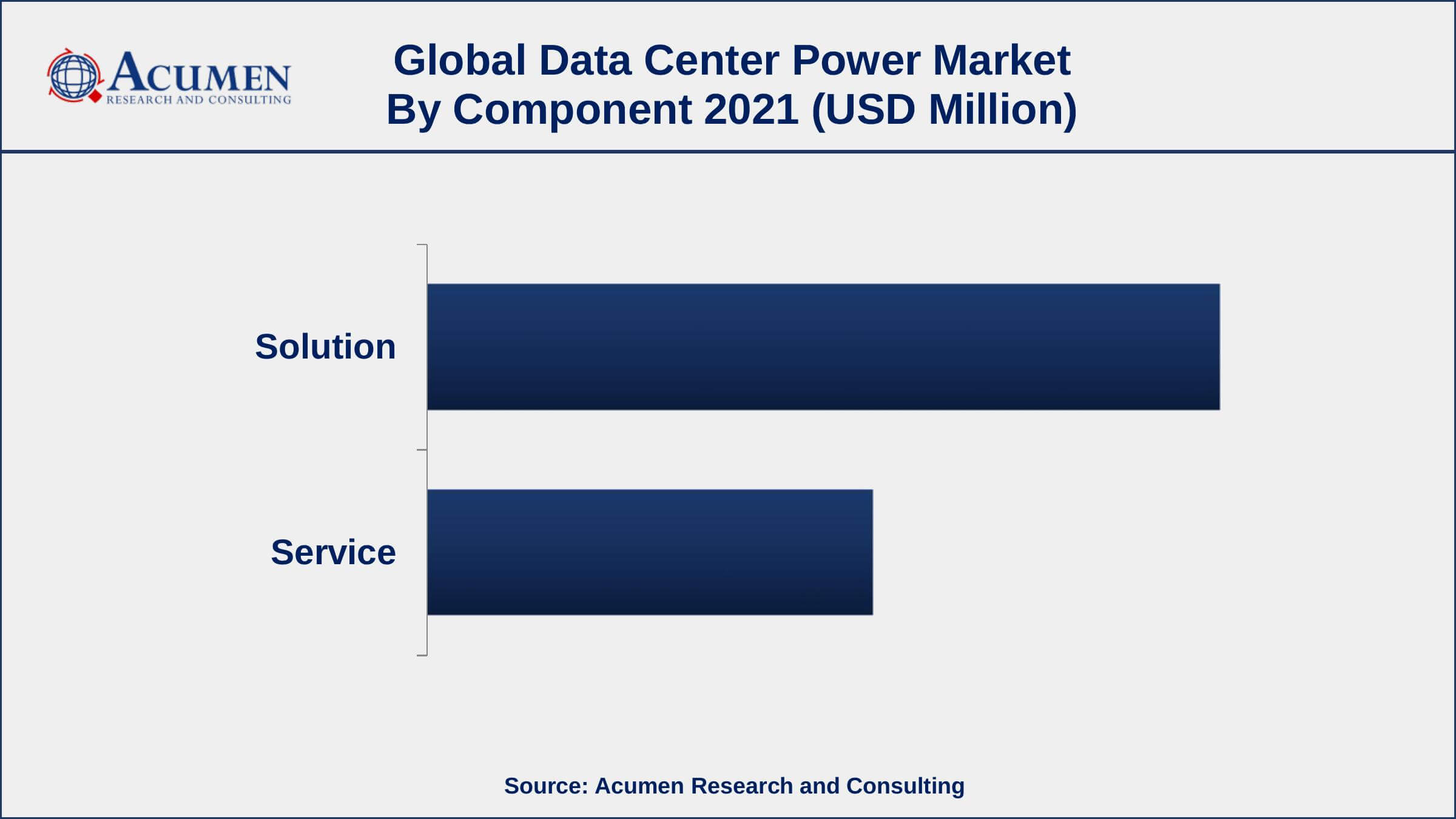 According to a data center power industry analysis, the solution segment accounted for the largest market share in 2021. The solution section is further subdivided into UPS, generators, busways, power distribution units (PDUs), and others. Among these, the UPS segment is expected to dominate the market in 2021. During the analysis period, the growing adoption of cloud computing, together with the rapidly expanding demand for ubiquitous and sensitive data, had a beneficial impact on the sub-segment. The increasing use of cloud computing, combined with the necessity for confidential and omnipresent data, has prompted the deployment of such a device. The incorporation of portable UPS systems in applications such as  Software as a Component (SaaS), online gaming, high-performance computing, and online content streaming has also contributed to the segment's growth. 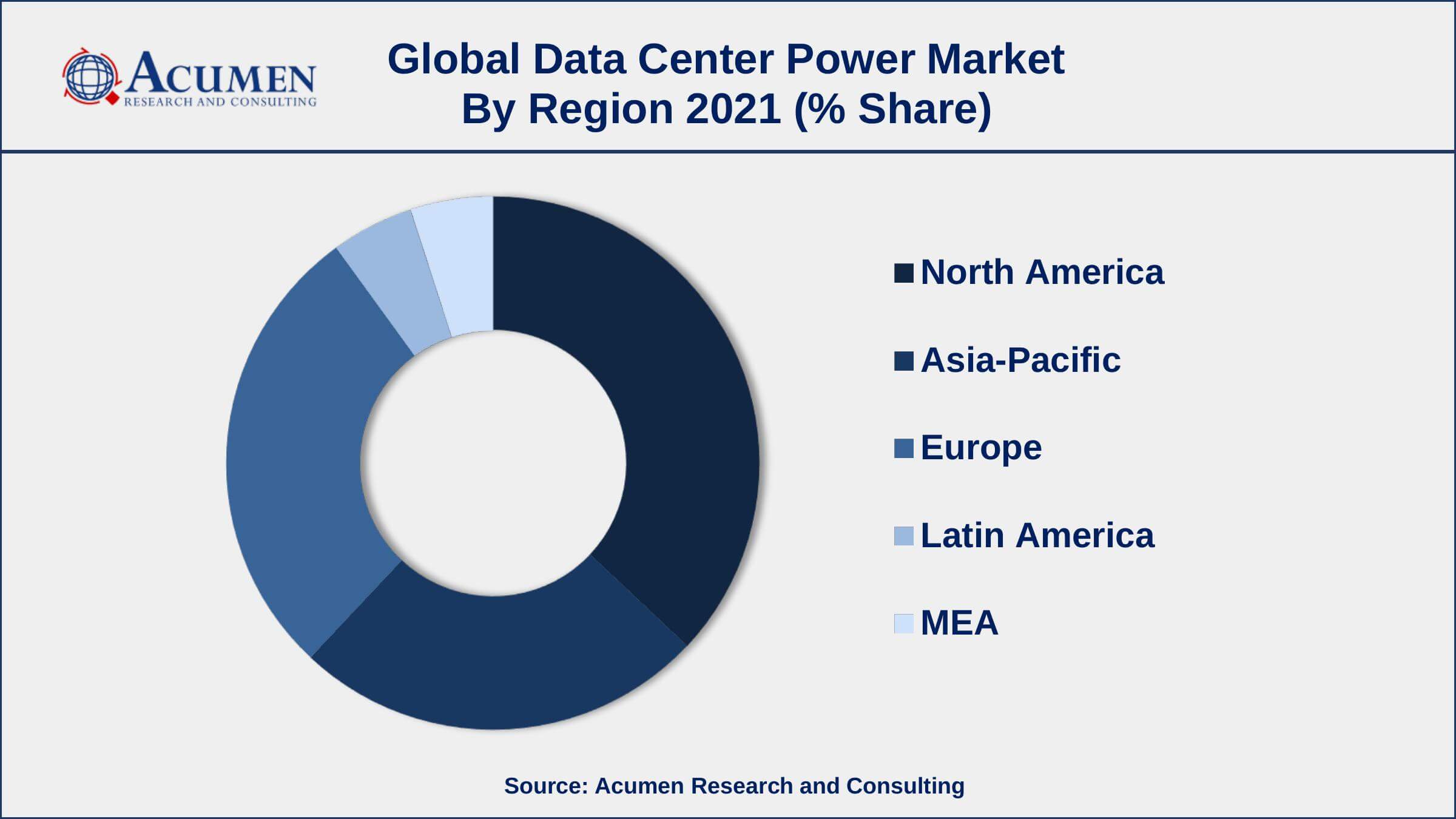 In terms of revenue, North America held the highest market share in 2021. This growth is attributed to the region's growing data centers, as well as the IT and telecom sectors. Governments and regulatory bodies have developed and implemented a wide range of standards and policies to reduce carbon footprints and energy consumption. As a result, effective power management systems have gained widespread adoption, fueling the regional market growth. Companies, for instance, spend a large amount of money on cooling and maintenance systems. As a result, it is necessary to integrate effective power management equipment, such as busways, PDUs, and UPSs, along with other things, to control expenditure on network infrastructure.

What is the size of global data center power market in 2021?

The estimated value of global data center power market in 2021 was accounted to be USD 9,354 Million.

What is the CAGR of global data center power market during forecast period of 2022 to 2030?

Which region held the dominating position in the global data center power market?

North America held the dominating data center power market during the analysis period of 2022 to 2030.

What are the current trends and dynamics in the global data center power market?

Based on component, solution segment is expected to hold the maximum share of the data center power market.