An electric vehicle (EV) is propelled by electricity rather than a gasoline-fuelled internal combustion engine. As a result, such a vehicle is viewed as a potential replacement for current-generation automobiles in order to address issues such as rising pollution, global warming, decreasing natural resources, and so on. The term 'SUV' is automotive industry jargon for a sports utility vehicle. It refers to a car that rides high off the ground and typically has four-wheel drive and a rugged design. SUVs have grown in popularity during the last 20 years or so. They are especially popular as family vehicles, with many people preferring them to more typical options such as estate cars and MPVs. Both of these terms combined make an extraordinary combination called electric SUVs or E-SUVs. The surging fuel price is the primary factor that is boosting the electric SUV market revenue. In addition to that, some of the top trends in the worldwide electric SUV market include increasing demand for fuel-efficient, low-emission & high-performance vehicles and rising preference for SUVs and MUVs. 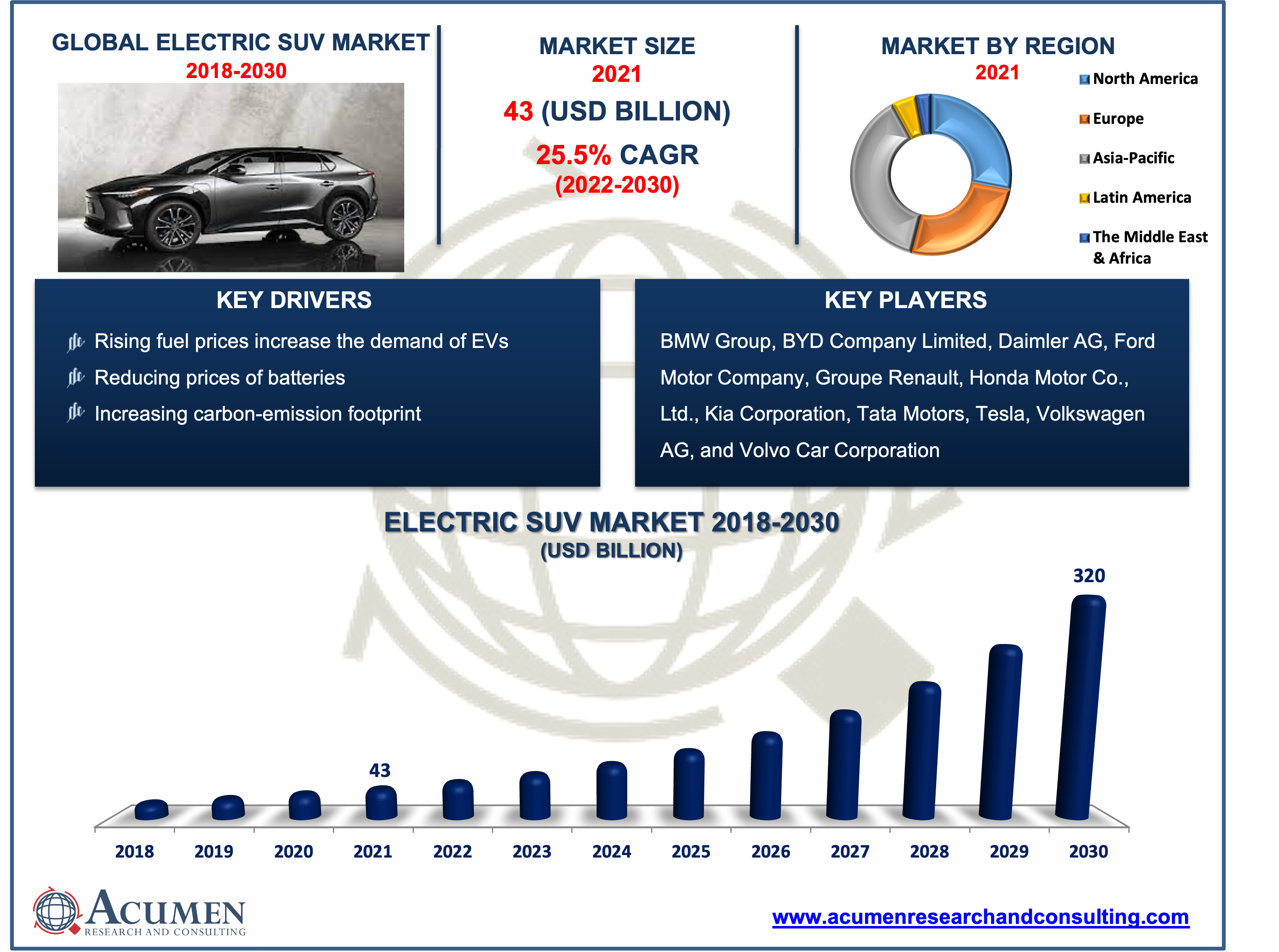 Over the last several years, there has been a dramatic movement from internal-combustion automobiles to electric or hybrid vehicles. Consumers have benefited from this class of automobiles due to government incentives to promote electric vehicles as well as rising fuel prices. This, together with people's increased disposable income, is fueling the expansion of the electric SUV market. Governments around the world are boosting their investments in electric mobility. Government laws to phase out fossil-fuel-powered vehicles, government investments to improve public EV charging infrastructure, and actions in the form of subsidies and tax refunds to encourage EV adoption are projected to boost the market growth. Governments are investing in charging infrastructure, either directly in public charging stations or indirectly through subsidies for private charging stations at homes and workplaces.

In addition, governments are providing appealing incentives and policies to stimulate the purchase of EVs. It offers users a variety of perks, including lower selling prices, no or low-priced registration fees, and free EV charging infrastructure at various charging points. Many governments throughout the world have enacted rigorous car emission laws in an attempt to minimize the quantity of greenhouse gas emissions in the environment. In Europe, the European Union has enacted legislation to cut CO2 emissions from light and medium commercial vehicles by 15% by 2025. However, lack of charging infrastructure coupled with the high initial investments required to install an EV charging infrastructure is certainly limiting the electric SUV market growth.

The global electric SUV market is segmented based on propulsion, type, seating capacity, and geography. 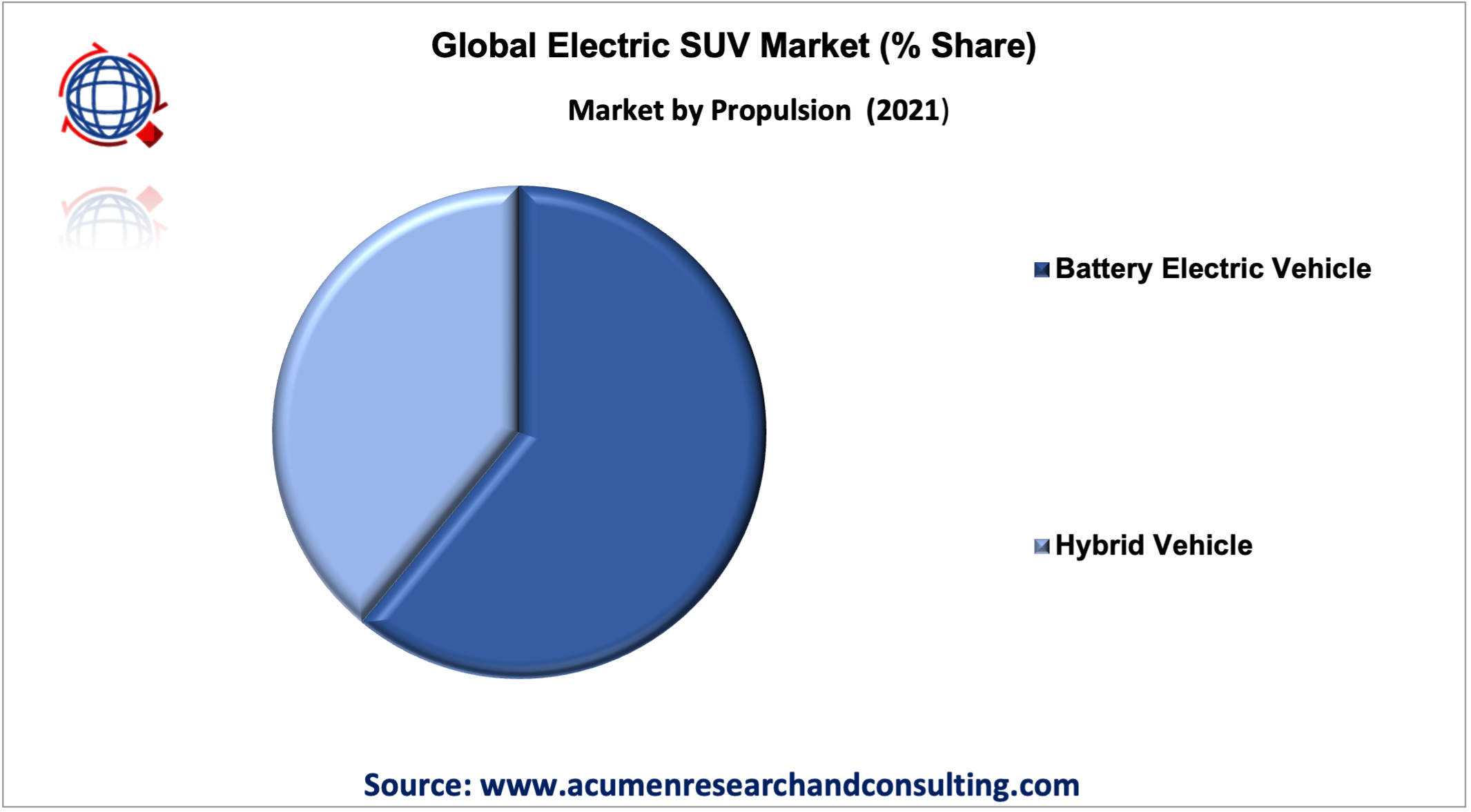 Based on our analysis, the battery electric vehicle segment accounted for the majority of the electric SUV market share in 2021. The high preference of consumers towards this class has helped the market to grow with a maximum share. However, the hybrid vehicles will witness a significant growth rate throughout the forecast period 2022 – 2030. Two engines power hybrid vehicles: one gasoline and one electric. To turn the wheels, they work together. As a response, less gasoline is burned, and fuel economy improves. The fundamental distinction between a hybrid and an electric vehicle is that the hybrid uses both an internal combustion engine and an electric motor(s) to power its wheels. The electric car, on the other hand, gets its power from a single source: the electric motor(s). While hybrid vehicles provide higher fuel efficiency or longer distances/ranges, electric vehicles have yet to reach their full potential. Nonetheless, electric vehicles emit fewer pollutants than hybrid vehicles that rely on an internal combustion engine. 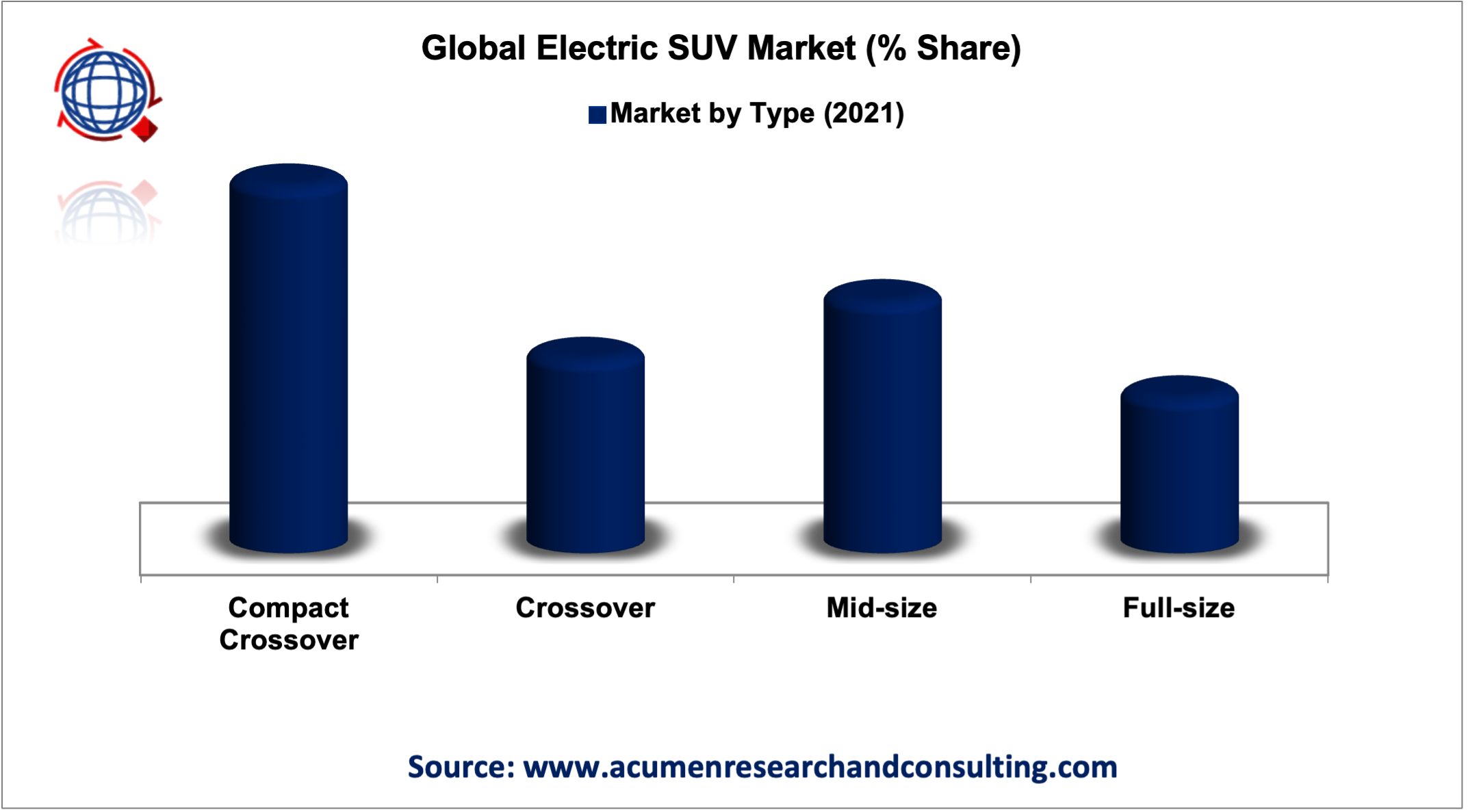 Out of these, the compact crossover segment generated considerable market share in 2021. Early crossovers filled a market void. They were designed for those who sought the benefits of an SUV, such as high ground clearance, room, and practicality, without the drawbacks of an SUV, such as high fuel consumption and poor comfort. Crossovers, like sedans, have a smooth, pleasant ride since they are based on unibody chassis. They are also quite easy to drive and do not necessitate the driver learning new abilities. When compared to SUVs, they are easier to manage, park, and stop at shorter distances. They are also lighter than regular SUVs due to their unibody design. This also increases their fuel efficiency.

Among them, the 5-seater segment held the maximum market share during the forecasted timeframe from 2022 to 2030. The 5-seater market sector is popular because the cars are right-sized, right-priced, and meld carlike smoothness with a touch of practicality. These cars are also popular in the small family category. Moreover, owing to their economic advantages people with medium income are also acquiring this category, thereby increasing the market sales. Meanwhile, the 6-seater and above segment are expected to attain considerable growth throughout the forecasted timeframe from 2022 to 2030.

North America, Latin America, Asia-Pacific, Europe, and the Middle East & Africa are the regional segments (MEA). The Asia-Pacific region is likely to register the quickest CAGR during the projected years. Availability of economical domestic resources, strong state support, and emerging economies in the region which are expected to boost market growth, especially in countries such as China and India are some of the aspects that are supporting the Asia-Pacific electric SUV market. According to the Society of Indian Automobile Manufacturers, SUVs grew from 12.59% of India's passenger vehicle (PV) segment in 2010-11 to 25.01% in 2016-2017. Moreover, SUVs are expected to account for roughly 40% of India's PV sector during the next decade.

Europe is one of the leading regions in the electric SUV market owing to the presence of stringent government guidelines to reduce carbon emissions. SUV demand shows no signs of slowing, and Europe is following in the footsteps of the United States and China in terms of rising popularity. According to the latest estimates, the SUVs were the largest vehicle selling segment in Europe. As a result, all of these reasons will increase demand for Europe electric SUV market in the future.

How much was the estimated value of the global electric SUV market in 2021?

The estimated value of global electric SUV market in 2021 was accounted to be US$ 43 Bn.

What will be the projected CAGR for global electric SUV market during forecast period of 2022 to 2030?

Which region held the dominating position in the global electric SUV market?

Asia-Pacific held the dominating share for electric SUV during the analysis period of 2022 to 2030.

Asia-Pacific region exhibited fastest growing CAGR for electric SUV during the analysis period of 2022 to 2030.

What are the current trends and dynamics in the global electric SUV market?

Rising environmental concerns, increase in penetration of fuel-efficient mobility solution, and rising consumers' preference for SUVs all contribute to the expansion of the worldwide electric SUV market.

By segment Propulsion, which sub-segment held the maximum share?

Based on propulsion, battery electric vehicle segment held the maximum share for electric SUV market in 2021.