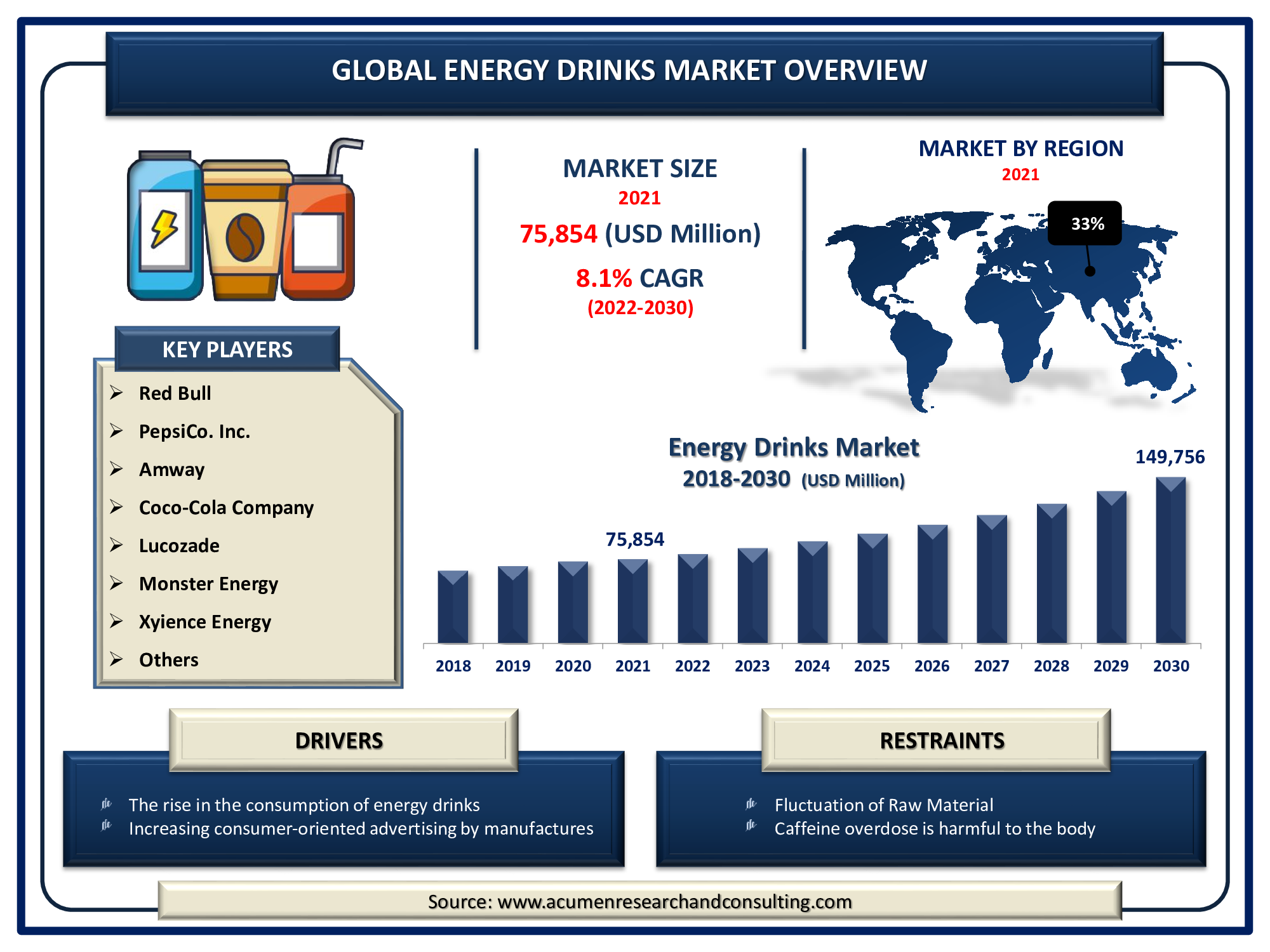 The global energy drinks market growth is being driven by rising health consciousness, changes in consumer lifestyle, and growing awareness of health and wellness products. Furthermore, factors such as increasing urbanization and rising disposable income among various inhabitants segments are likely to drive the energy drink market in the coming years.

Energy drinks provide a boost of energy by combining stimulants and energy boosters. Caffeine is the primary active component in the majority of energy drinks. Energy drinks are a kind of liquid product that frequently contains caffeine, as well as other nutritional supplements. Over the past two decades, consumption of energy drinks has grown significantly, particularly among teenagers and young adults. Energy drinks are aggressively marketed as giving consumers a surge of energy to improve their behaviour and cognitive function. Energy drinks offer the general population advantages such as refreshment, enhanced attention, quick energy, and reaction time. Aside from caffeine, energy drinks usually include B vitamins, taurine, ginseng, and glucuronolactone.

On the other hand, an excess of caffeine may cause hypertension, nervousness, restlessness, and other health consequences, which are further expected to impede the growth of the energy drink market in the near future. Secondly, the shift in consumer preference for carbonated beverages and a healthy lifestyle will provide further opportunities for the energy drinks industry to grow in the coming years. 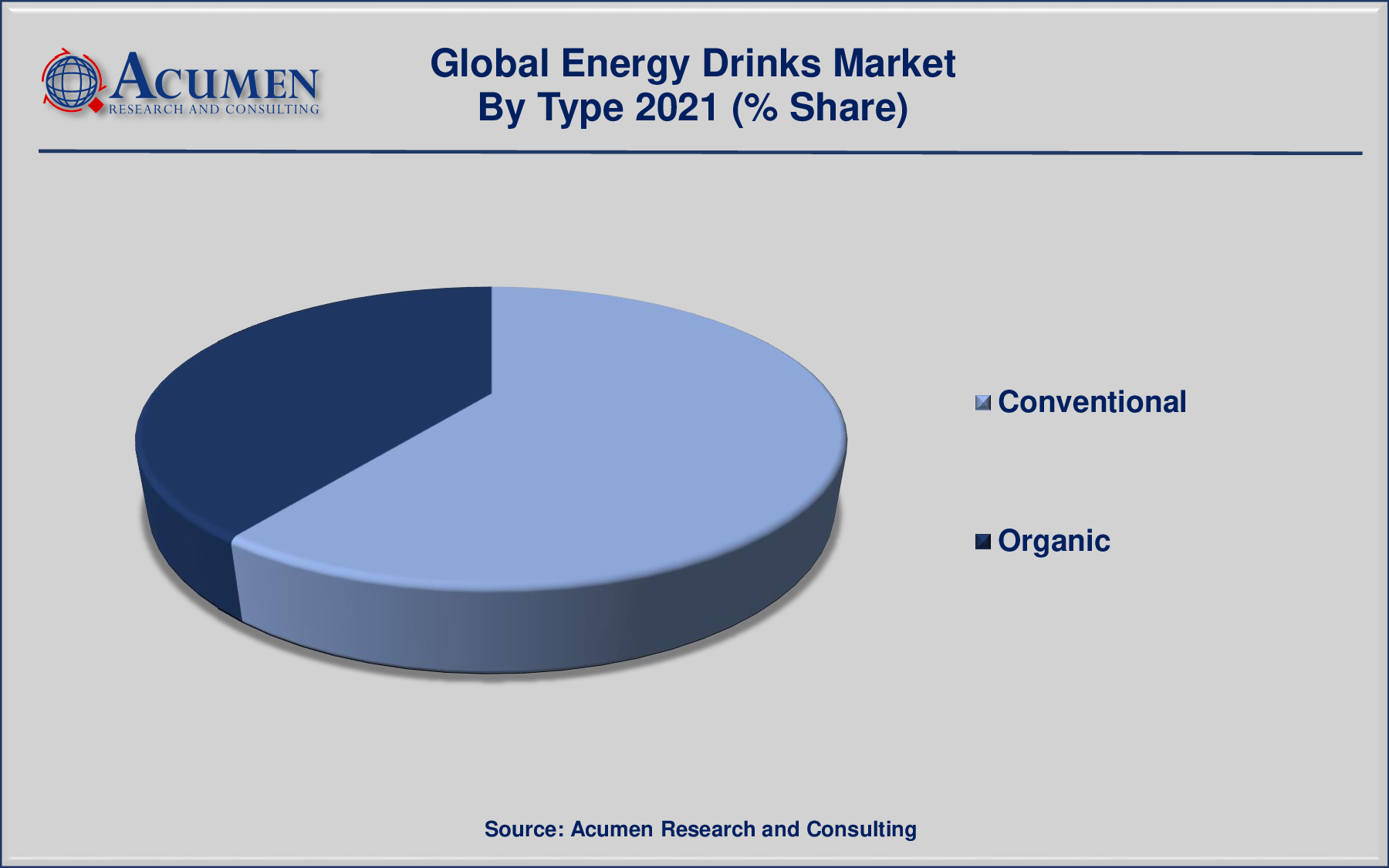 Based on the Type, the organic segment is predicted to rise rapidly in the market over the next several years. The growing desire for organic products among health-conscious consumers has had a positive impact on the industry's segment demand. The market for organic and natural energy drinks is predicted to rise in emerging countries such as the United States, Canada, India, Germany, and China due to the region's more stringent regulations. Furthermore, as a result of concerns about overly processed, artificial ingredients, as well as the effects of pesticides and antibiotics, an increasing number of nutrition consumers choose organic products over conventional counterparts. This condition has significantly increased the use of organic energy drinks.

In terms of product, the drinks segment will hold the bulk of market shares in 2021. Consumers prefer drinks over other options since they give immediate hydration as well as significant nutrients for the body's well-being. Furthermore, due to the variety of tastes and offers for natural beverages, these drinks have a larger consumer base. 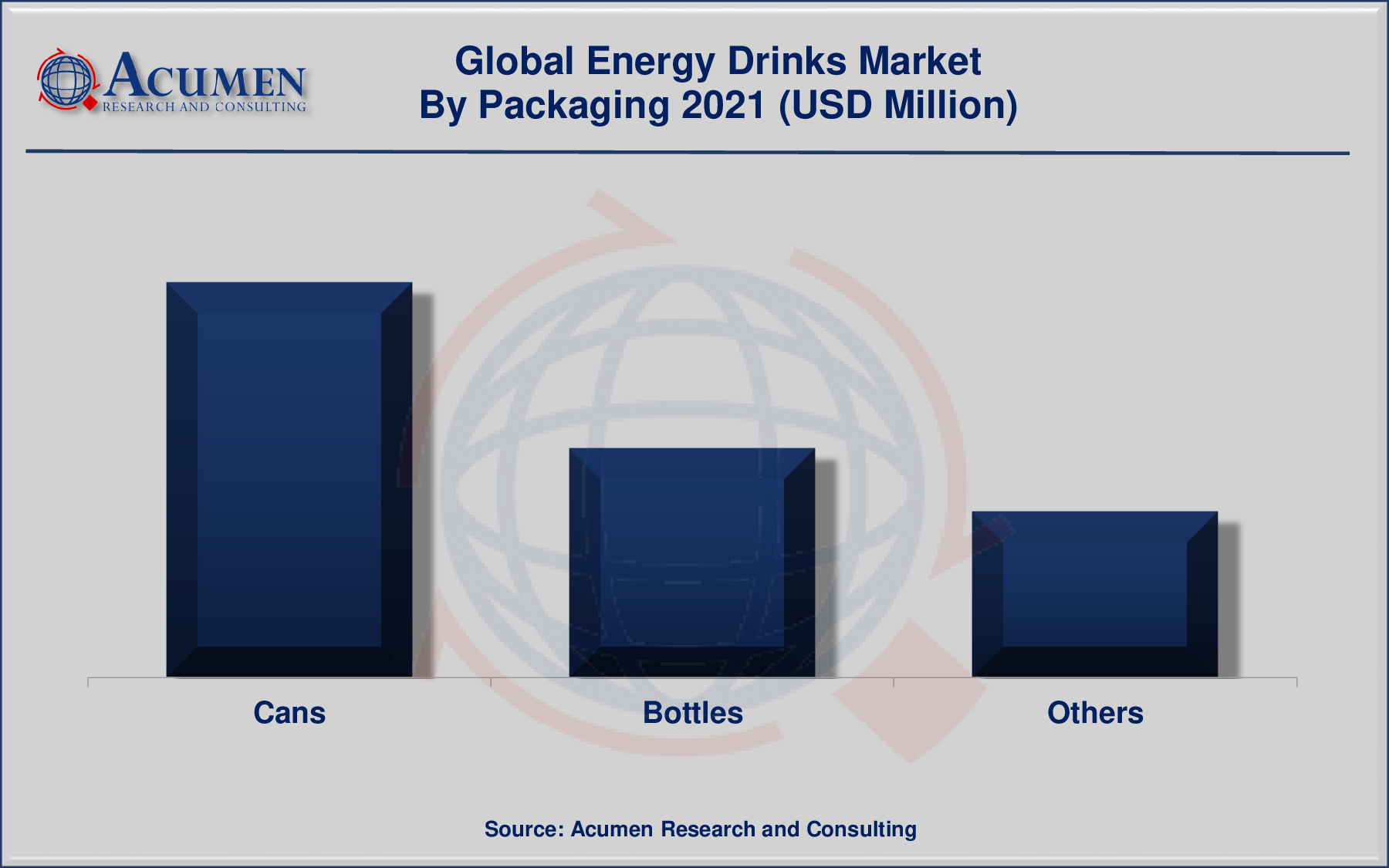 In terms of packaging, the canning segment accounted for nearly half of the market shares in 2021. Metal cans are chosen by youthful consumers because of their mobility and resistance to shattering. Consumers, who are getting more educated in their tastes and preferences, are increasingly choosing these beverages over canned alcohol and other alcoholic beverages. Furthermore, as a result of the shutdown of bars, pubs, and eateries due to the coronavirus outbreak, demand for the product in cans has skyrocketed and is expected to continue to rise over the forecast period.

Based on the distribution channel, the on-trade category is expected to grow significantly in the industry over the next few years. The segment is being driven by an increasing number of restaurants, resorts, cafeterias, pubs, diners, and parties that offer a varied assortment of these beverages. Such factors are expected to boost product sales, and this trend is expected to continue in the near future. Moreover, consumption of the product and carbonated beverages has shifted away from bars and restaurants and into personal spaces, which has harmed the on-trade market.

North America is predicted to be the prominent region in the global energy drinks market due to the high consumption of energy drinks among various demographic segments and growing health consciousness among inhabitants of economies such as the United States and Canada. Furthermore, the existence of a significant number of enterprises in these regions is expected to aid in the development of the market in the United States. North Americans consume a larger geographic share of the world's energy drinks due to shifting demographics, economic interests, and drinking patterns. Furthermore, rising competition and migration both led to the modification of consumers' drinking practices, which were eventually absorbed into their excessive drinking.

How much was the global energy drinks market size in 2021?

The global energy drinks market size in 2021 was accounted to be USD 75,854 Million.

What will be the projected CAGR for global energy drinks market during forecast period of 2022 to 2030?

Which region held the dominating position in the global energy drinks market?

North America held the dominating share for energy drinks during the analysis period of 2022 to 2030.

Asia-Pacific region exhibited fastest growing CAGR for energy drinks during the analysis period of 2022 to 2030.

What are the current trends and dynamics in the global energy drinks market?

Rise in the consumption of energy drinks, and increasing consumer-oriented advertising by manufactures are the prominent factors that fuel the growth of global energy drinks market.

By segment packaging, which sub-segment held the maximum share?

Based on packaging, cans segment hold the maximum share for energy drinks market in 2021.