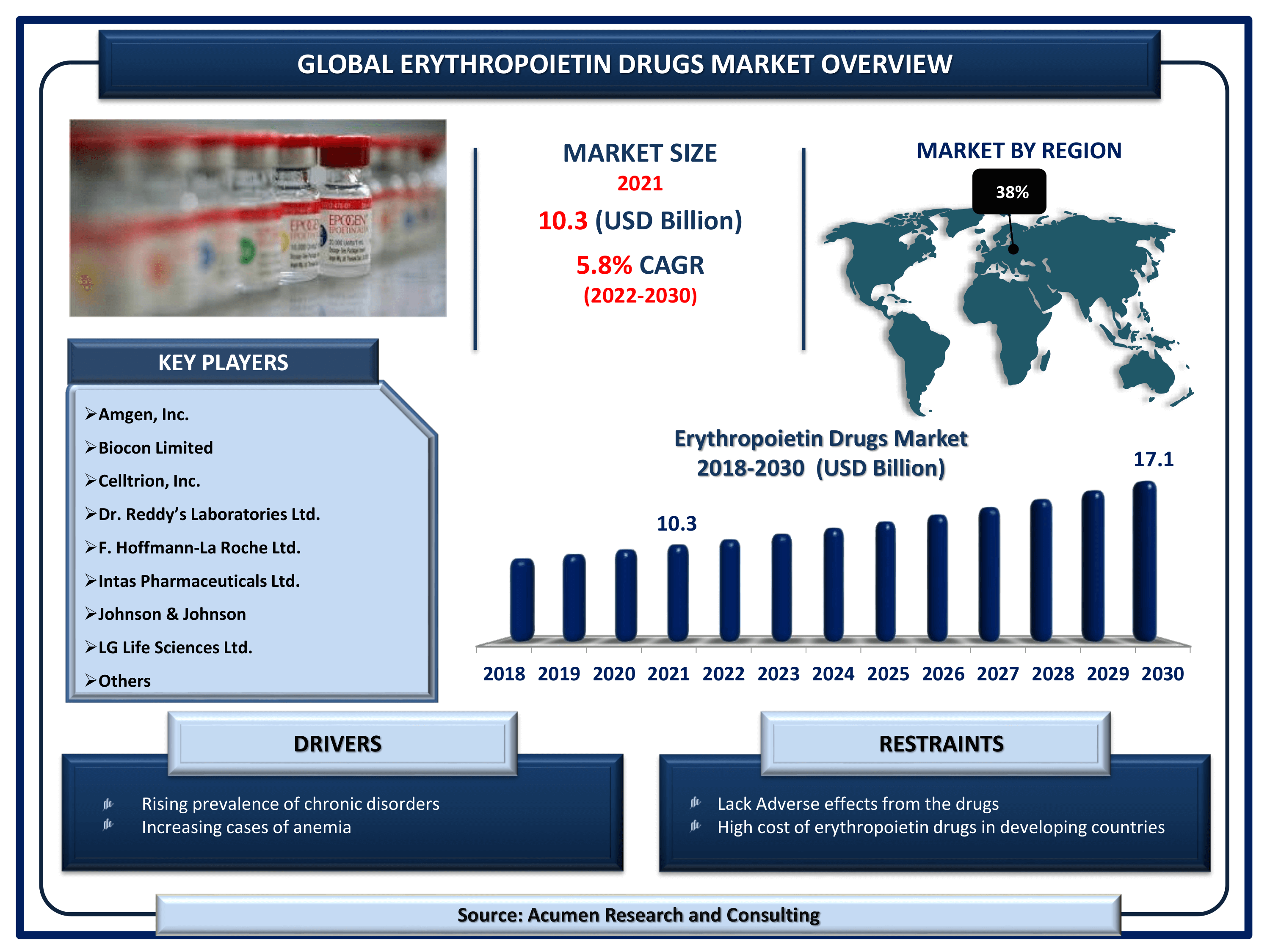 The kidney produces erythropoietin (EPO), which is used to make red blood cells. Erythropoietin-stimulating agents are frequently used to treat people with chronic kidney disease and anemia. EPO, which is produced naturally by the kidneys, is also available as a pharmaceutical. EPO stimulates red blood cell production in bone marrow and regulates the concentration of red blood cells and hemoglobin in the blood. This is advantageous for athletes because red blood cells transport oxygen to cells, including muscle cells, allowing them to function more effectively.

Anemia is a condition in which the number of red blood cells or the concentration of hemoglobin within them is less than normal. Anemia is a serious global public health issue that disproportionately affects children and pregnant women. According to the World Health Organization (WHO), 42% of children under the age of five and 40% of pregnant women worldwide are anemic. Correcting anaemic conditions in the patient group necessitates increasing Hb, and correcting anemia necessitate improving platelet function. Epoetin may also be used to prevent or treat anemia caused by surgery or medications (for example, zidovudine) used to treat other conditions such as HIV or cancer.

Cancerization of Erythropoietin biosimilars bolsters the growth of global market

Biosimilar epoetins were approved for the first time in 2007, and a wealth of data has been accumulated over the last decade. So far, the EMA has approved two biosimilar epoetins (fewer than five different Cancer names). These agents are approved only if extensive analytical and clinical testing demonstrates that they are of comparable quality, safety, and efficacy to the reference medicine, and real-world studies provide additional evidence that biosimilar epoetins are an effective and well-tolerated option for the treatment of chemotherapy-induced anemia in cancer patients. Furthermore, in May 2018, the United States Food and Drug Administration approved "Retacrit (epoetin alfa-epbx)" as a biosimilar to "Epogen/Procrit (epoetin alfa)" for the treatment of anemia caused by chronic kidney disease, chemotherapy, or zidovudine use in HIV patients. Retacrit is also approved for use before and after surgery to reduce the likelihood of needing red blood cell transfusions due to blood loss during surgery.

The COVID-19 outbreak has disrupted workflows in the health care sector around the world. The disease has forced a number of industries, including several sub-domains of health care, to temporarily close their doors. However, there has been a positive impact and increase in demand for various medical services, including erythropoietin. According to researchers at the Max Planck Institute of Experimental Medicine in Göttingen, erythropoietin (EPO) is a drug for anemia and can be effective against COVID-19. They claim that when SARS-CoV-2 attacks the brain, the growth aspect of erythropoietin can prevent serious disease development and protect people from long-term neurological effects. Primary case studies indicate that erythropoietin has a beneficial effect. Scientists are currently planning a randomised clinical trial to systematically investigate the effects of using erythropoietin to treat COVID-19.

The worldwide erythropoietin drugs market is split based on Drug Class, Product, application, and geography.

According to our erythropoietin drugs industry analysis, the biologics erythropoietin class is expected to dominate the global erythropoietin drugs market. This is because patents are protected. Another factor contributing to its dominance is the presence of a large patient population and a higher uptake of biologics. Due to the recent patent expiration of major brands such as Epogen, the biologics segment is expected to lose market share. This drug's patent exclusivity expired in May 2015, resulting in lower sales revenue for its manufacturer, Amgen Inc.

As per erythropoietin drugs market forecast, epoetin-alfa will have reasonable market share from 2022 to 2030. Furthermore, there is a high usage rate in alleviating anemia in cancer and chronic renal failure patients. This was the first biologic to be approved by the US Food and Drug Administration for the treatment of anemia caused by CKD, cancer chemotherapy, and HIV treatment. Epoetin-alfa was patent-protected, limiting the production of any other recombinant human erythropoietin drug and assisting this segment to dominate in 2021.

In 2021, renal diseases have dominated the application market in the past and are expected to do so again during the forecast period. This is due to quick product approvals by authorized bodies. For example, the first erythropoietin drug, Epogen, was approved by the US Food and Drug Administration for the treatment of anemic indications associated with CKD.

Asia Pacific, on the other hand, is expected to have the fastest growing CAGR in the coming years. This is due to the ongoing rise in the incidence of chronic diseases, as well as the high demand for low-cost therapeutics. Asia Pacific has sparked significant interest in many companies for the development of biosimilars, and the region is known for producing more biosimilars than any other region in the world.

What is the size of global erythropoietin drugs market in 2021?

The market size of erythropoietin drugs market in 2021 was accounted to be USD 10.3 Billion.

What is the CAGR of global erythropoietin drugs market during forecast period of 2022 to 2030?

The projected CAGR of erythropoietin drugs market during the analysis period of 2022 to 2030 is 5.8%.

Which region held the dominating position in the global erythropoietin drugs market?

Europe held the dominating erythropoietin drugs during the analysis period of 2022 to 2030.

Asia-Pacific region exhibited fastest growing CAGR for erythropoietin drugs during the analysis period of 2022 to 2030.

What are the current trends and dynamics in the global erythropoietin drugs market?

Based on drug class, biologics segment is expected to hold the maximum share erythropoietin drugs market.