The esports market is on a sudden rise due to the rising number of online players. Esports or electronic sports are a term used to describe video game competitions. Esports has faced a lot of uncertainty in 2020 due to the outbreak of the COVID-19 pandemic; however, the future of competitive gaming is quite bright. 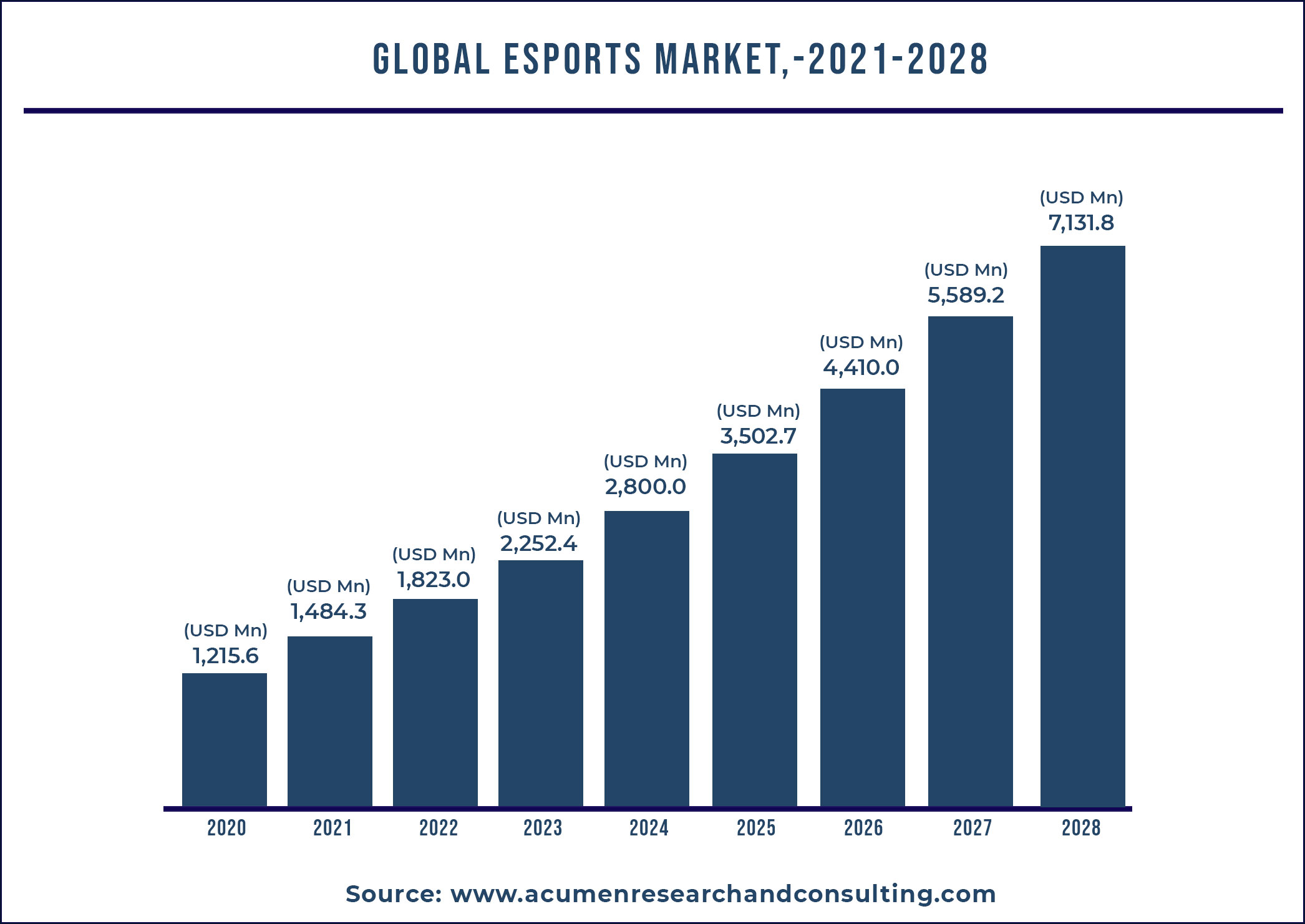 There is no doubt that COVID-19 has had a significant impact on every industry in the world, including gaming. As user engagement and spending increased during the initial outbreak of the global COVID-19 pandemic in 2020, gaming quickly emerged as one of the most popular activities. However, many events and global tournaments were canceled or postponed in this period, which affected the industry badly. But, the esports market jumped over the obstacle and is performing well.

The global esports market growth is driven by factors such as the rising popularity of online video games, growth in live streams, and high penetration of smartphones coupled with the growing trend of youth towards online gaming. For instance, globally there were 2.69 billion mobile gamers and 80 billion mobile games downloaded in 2020. Global online platforms such as Facebook, Youtube, Twitch that allow streamers to gain popularity and impressive earning have also contributed to higher growth for the esports market share. In addition, sudden growth in consumer spending in the gaming industry has also shown a sudden rise in the intensification of the professional gaming industry. The professionalization in the market has generated numerous growth prospects for new streamers, game developers, and event organizers.

However, the threat from illegal esports betting and gambling has shown a negative impact on the market. Also, budget constraints and limited event infrastructure are some aspects that might restrict the market from growing. Conversely, the rising number of international leagues and growing demand from advanced gaming technologies are likely to create several growth opportunities for the market in the coming years. Furthermore, growing investments in the industry are also expected to surge the growth of the market during the forecast period 2021 – 2028. For instance, Tencent, a global leader in the online gaming industry invested $90 million in Pocket Gems and $126 million in Glu Mobile. 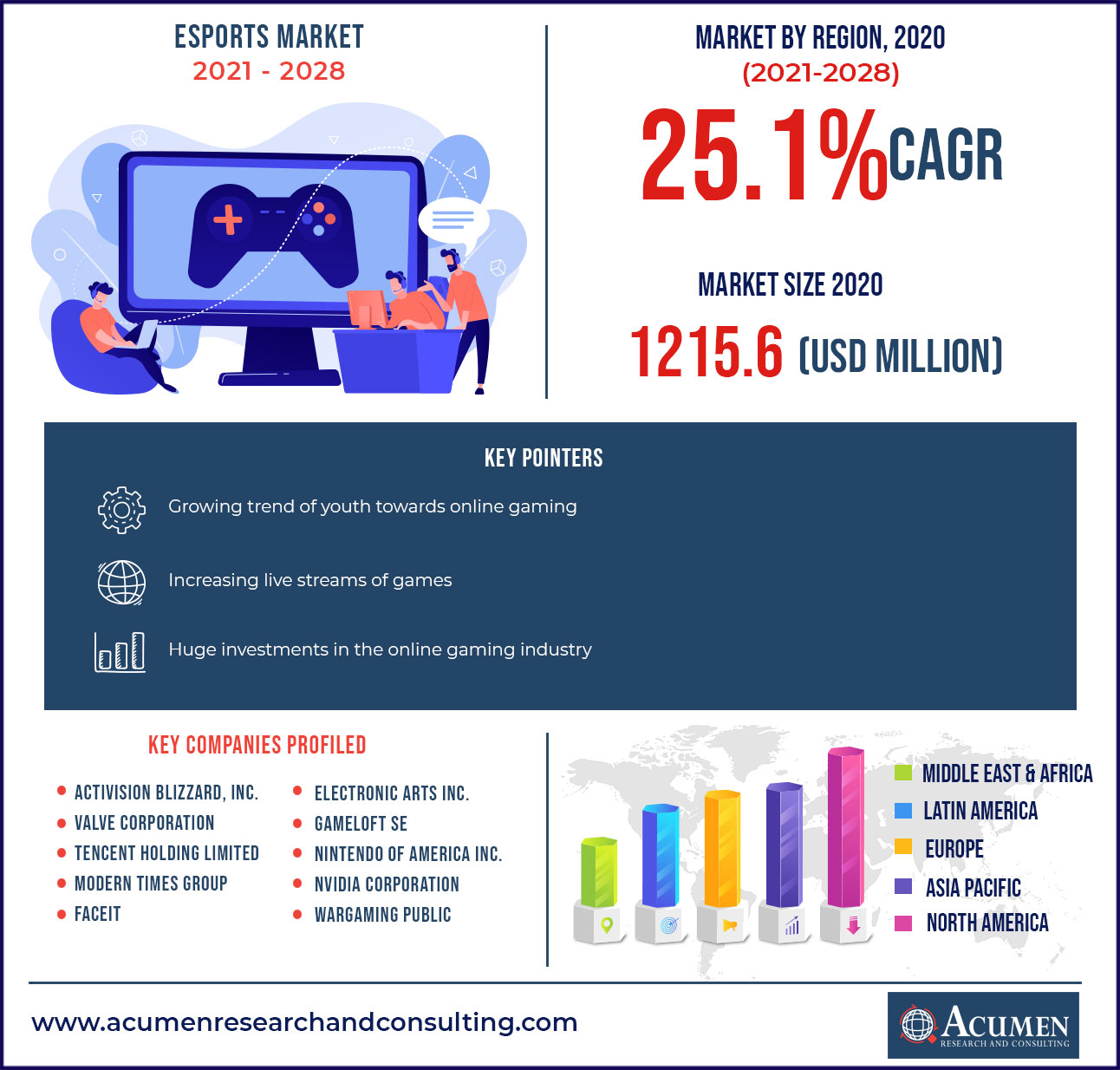 The global esports market is segmented based on revenue, and region. Based on the revenue segment, the market classifies as sponsorship, advertising, publisher fees, merchandise & tickets, and media rights.

Among revenue, the sponsorship segment dominated the market with the largest share in 2020. The sponsorship segment has created an absolute dollar opportunity for events and streamers by reaching them through online and offline media channels. Tech giants such as Nvidia and Intel have already well-established sponsorship deals with esports leagues and teams. Such massive sponsorships have enabled these giants to increase their market share and brand recognition by selling gaming-related products. Additionally, smartphone brands such as Apple, One Plus, and Samsung have entered into the market to sponsor small and large events owing to the rise in the mobile gaming industry. Thus, the sponsorship segment is also expected to continue its trend throughout the forecast period from 2021 to 2028.

In 2020, the North American region accounted for the majority of the share. This is due to the large number of established players in the U.S. The region has also a huge number of PC gaming enthusiasts which as compared to any other region is impressively large. The early adoption of technologies, early launch of games, and their subsequent parts have also driven the regional market growth. The region is also home to the North America League of Legends Championship Series (NA LCS) and Overwatch League, which contributes to a billion-dollar industry.

However, the Asia-Pacific region is expected to attain the fastest growth during the forecast period 2021 – 2028. Besides, the APAC esports market is expected to dominate the market size during the forecast period. This is due to the growing number of esports competitions in countries such as China, India, and several Southeast Asian countries. Asia-Pacific is always been an attractive market for the gaming industry due to the growing youth population, ease of entry, and surging number of esports sponsors, spectators, and events from western countries.

The companies operating in the market are facing stiff competition, and thus they get involved in new business strategies to compete in the market. For instance, on September 29, 2021 – Electronic Arts Inc. and the Fédération Internationale de Football Association (FIFA) announced the launch of a new EA SPORTS FIFA 22 esports program that is expected to attract millions of players and viewers. In a variety of FIFA esports events, players will represent themselves, globally recognized esports organizations, real-world football clubs, and their country in 1v1 and 2v2 competitions.

How much was the estimated value of the global Esports market in 2020?

What will be the projected value of the global Esports market by 2028?

What will be the projected CAGR for global Esports market during forecast period of 2021 to 2028?

Which region held the dominating position in the global Esports market?

What are the current trends and dynamics in the global Esports market?

Growing trend of youth towards online gaming, increasing live streams of games, and huge investments in the online gaming industry are the prominent factors that fuel the growth of global Esports market

By Revenue segment, which sub-segment held the maximum share?

Based on revenue, sponsorship segment held the maximum share for Esports market in 2020