The Global Gas Turbine Market Size accounted for USD 25.5 Billion in 2021 and is estimated to achieve a market size of USD 39.2 Billion by 2030 growing at a CAGR of 5.1% from 2022 to 2030. Growing worries about GHG emissions as a consequence of stringent government rules requiring the use of gas-fired turbines over traditional power generation units are likely to drive the expansion of the gas turbine market growth. Furthermore, rapid technological advances in the power industry, together with a shifting focus toward a distributed generation of electricity technologies, are boosting the global gas turbine market value. 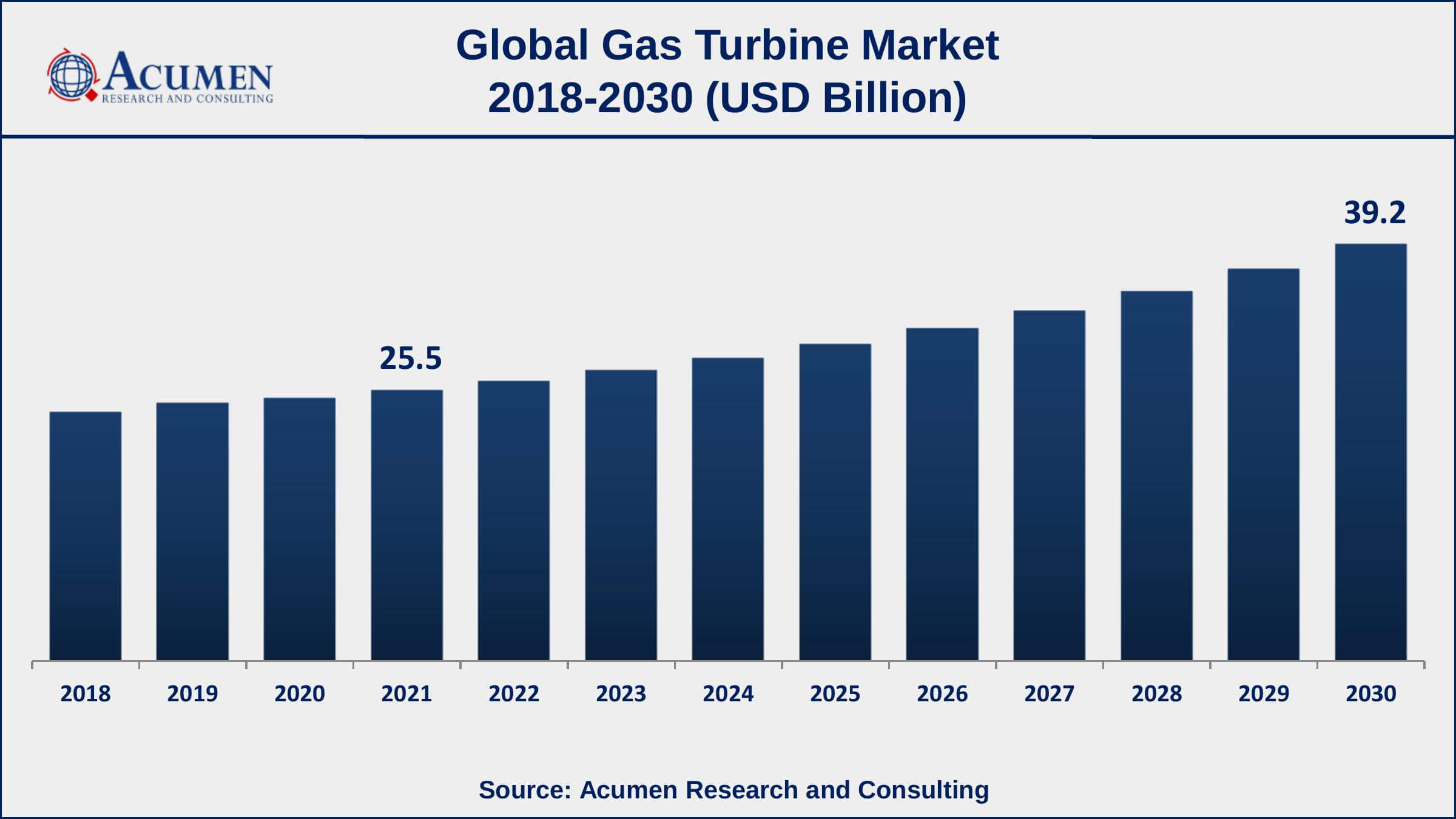 Gas turbines are mostly used to generate electricity. It is considerably more expensive to operate a simple cycle turbine power station than it is to buy outside electricity to feed the sector. As a result, combined cycle energy facilities, which are more efficient, are used most of the time. A CHP system is a kind of combined cycle plant, which can generate energy as well as provide mechanical drive. 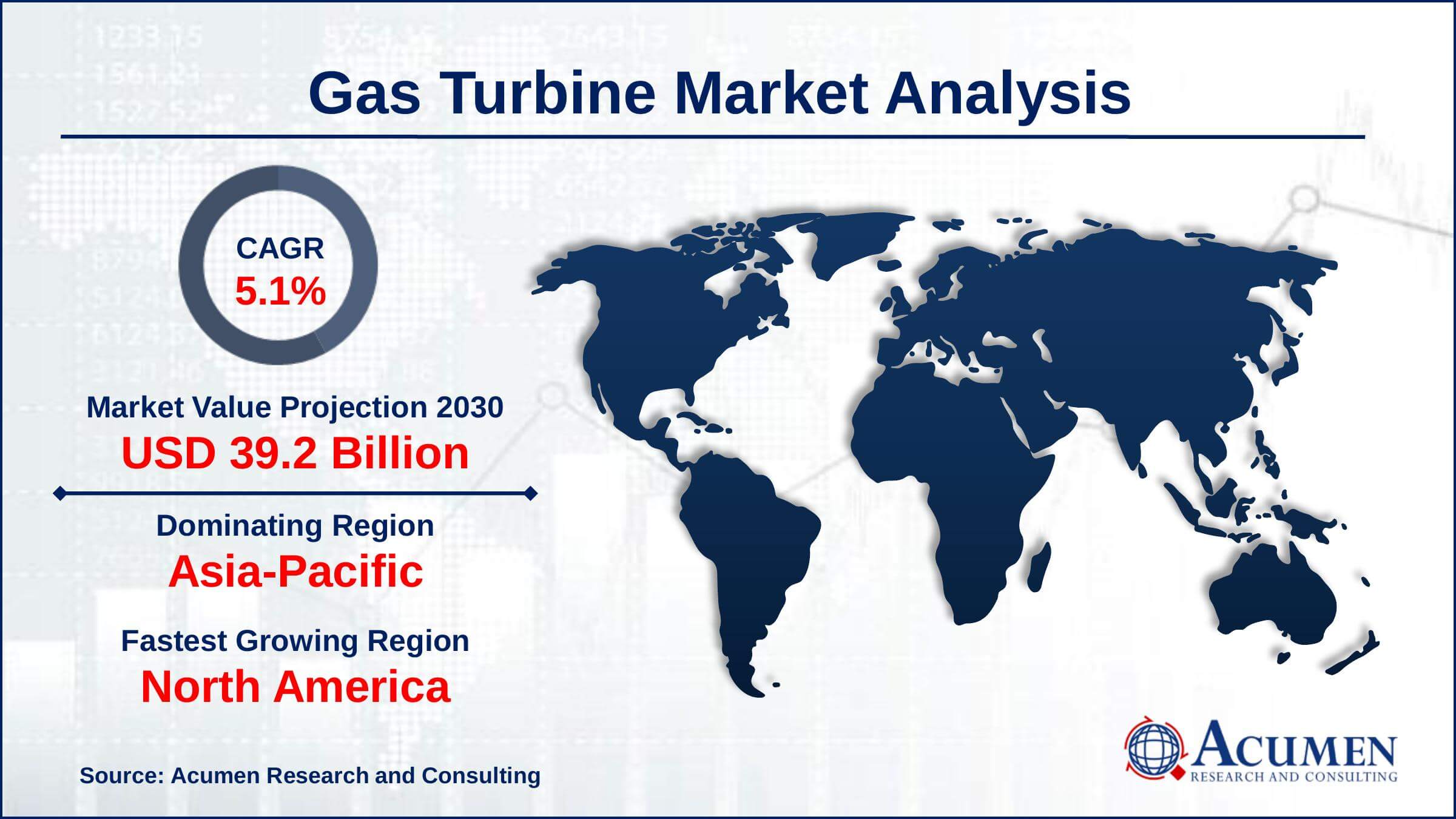 The market is required to be driven by increasing pressure from worldwide organizations to diminish carbon impression, alongside low shale gas costs. Motivating forces given by local governments to gas-based power generation organizations to battle expanding carbon impressions are probably going to drive showcase development. Gas turbines saw a particular increment in 2015, indicating an adjustment in arrangements by power generators to gain from low gas costs. The absolute biggest gas turbine shipments are assessed to make a beeline for Latin America, U.S., and Europe. In any case, Asia Pacific will probably show the quickest development rate within the coming years.

Post-2016, steam turbine orders are grabbing also, impersonating the pattern in gas turbines, attributable to rising CHP establishments over the globe. Combined cycle power generation is the most proficient type of innovation to produce power. This innovation portion additionally represents the biggest offer in the gas turbine market.

Worldwide electricity demand in the coming years is relied upon to increment by almost 33% of the present demand. Significant gas-delivering areas, for example, the Middle East, U.S., and Russia are seeing a noteworthy redo in their power generation framework to forcefully seek after gas-based power generation. Critical establishments are likewise found in Southeast Asia, Latin America, and Africa.

Turbines play a vital job in lessening carbon discharges. In examination with other burning-based power generation applications, they show to bring down outflows. With the execution of different environmental change activities just as directions to chop down GHG emissions, their potential is required to increment in the up and coming years.

The global gas turbine market segmentation is based on capacity, technology, application, and geography. 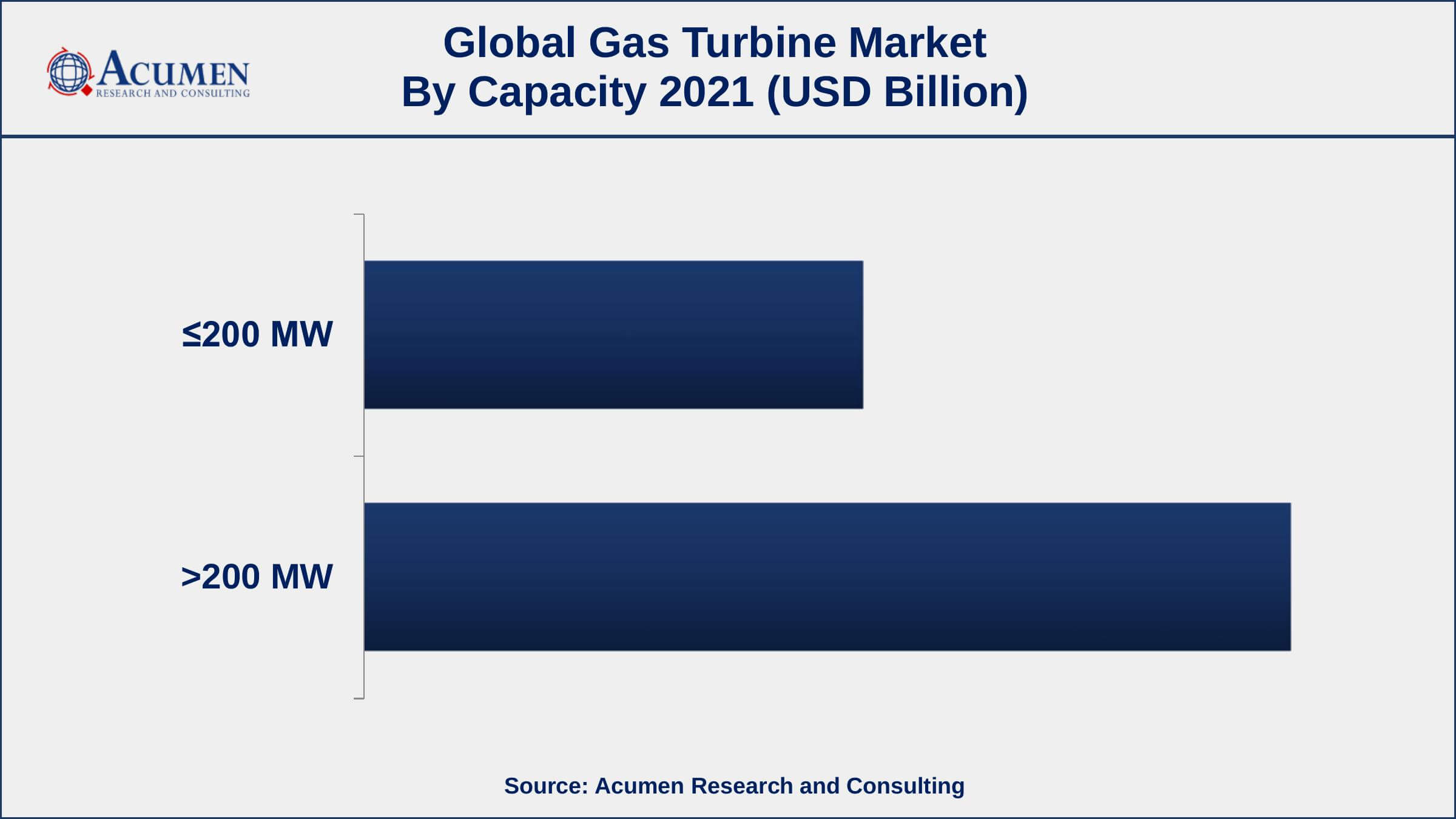 A gas turbine industry analysis found that the >200 MW capacity segment dominated the market in 2021. During the forecast timeframe, it is expected to become the fastest-growing segment. Increasing power generation activities around the globe, as well as the transition of a number of the world's major nations from coal to gas-based power stations, are increasing demand in this segment. 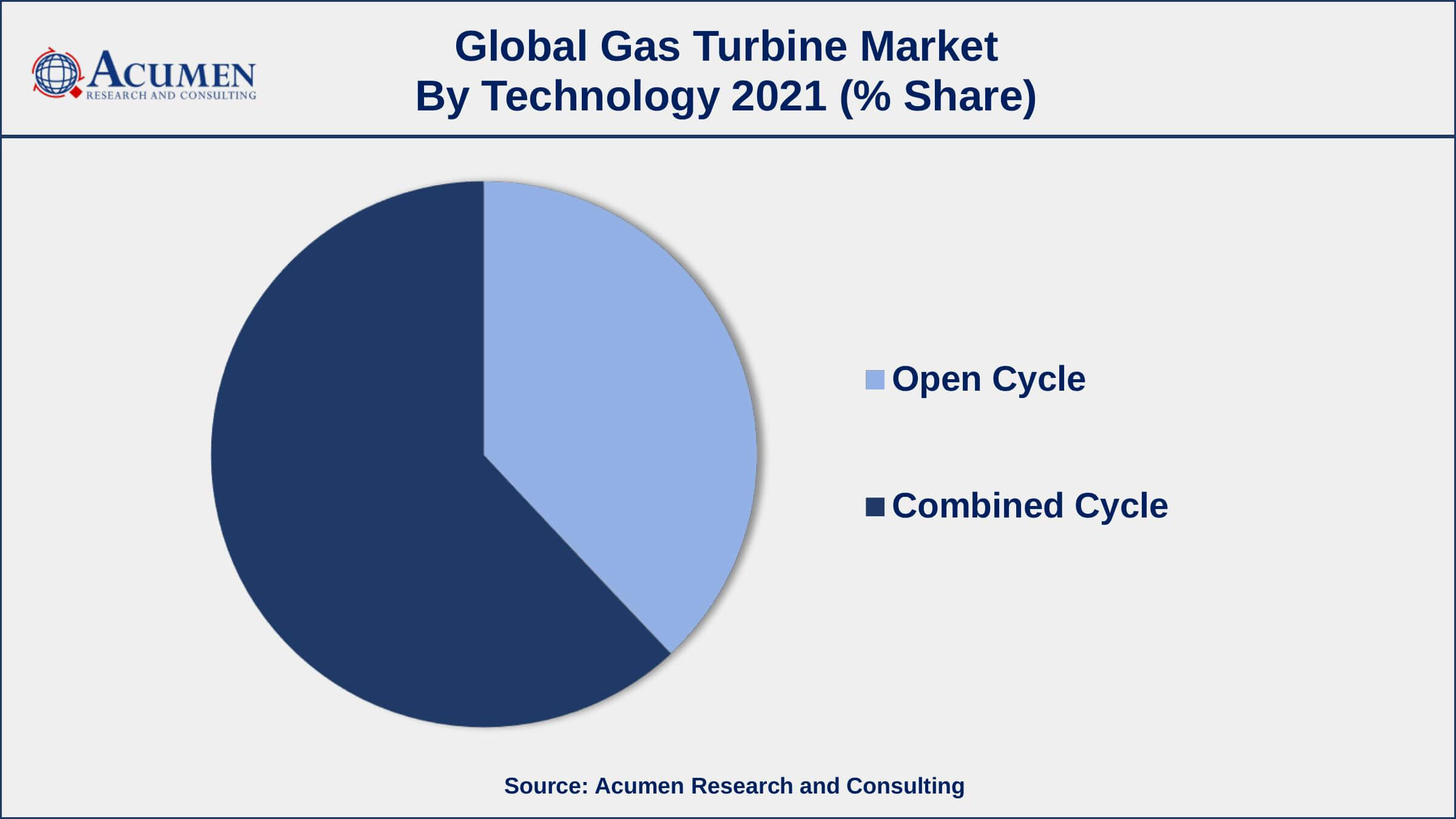 In terms of technology, the mixed-cycle turbines segment held a considerable market share in 2021. In the following years, this technology area is predicted to grow at a quicker rate. Those same turbines use much less gasoline to generate the same amount of electricity as traditional turbines and avoid losses in transmission and distribution. Combined cycle turbines are well-known for their efficiency, with systems achieving performances of 60 to 80%.

North America and Europe represent the biggest offer of power stations being decommissioned. This is due to the mainstream of the power plants being in the second period of their life cycle. In Europe, air contamination hardware of various plants that have not been updated was to be shut down by 2015. Maturing limits and authoritative activities made a potential substitution showcase. MEA is anticipated to emerge as the second biggest market in terms of orders and capacity additions. This region was esteemed at more than USD 5,000 million in 2017. Expanding requests can be credited to the rising inclination toward gas-fired combined cycle plants in the territorial oil and gas industry.

What is the size of global gas turbine market in 2021?

The estimated value of global gas turbine market in 2021 was accounted to be USD 25.5 Billion.

What is the CAGR of global gas turbine market during forecast period of 2022 to 2030?

Which region held the dominating position in the global gas turbine market?

Asia-Pacific held the dominating gas turbine during the analysis period of 2022 to 2030.

North America region exhibited fastest growing CAGR for gas turbine during the analysis period of 2022 to 2030.

What are the current trends and dynamics in the global gas turbine market?

Based on technology, combined cycle segment is expected to hold the maximum share of the gas turbine market.