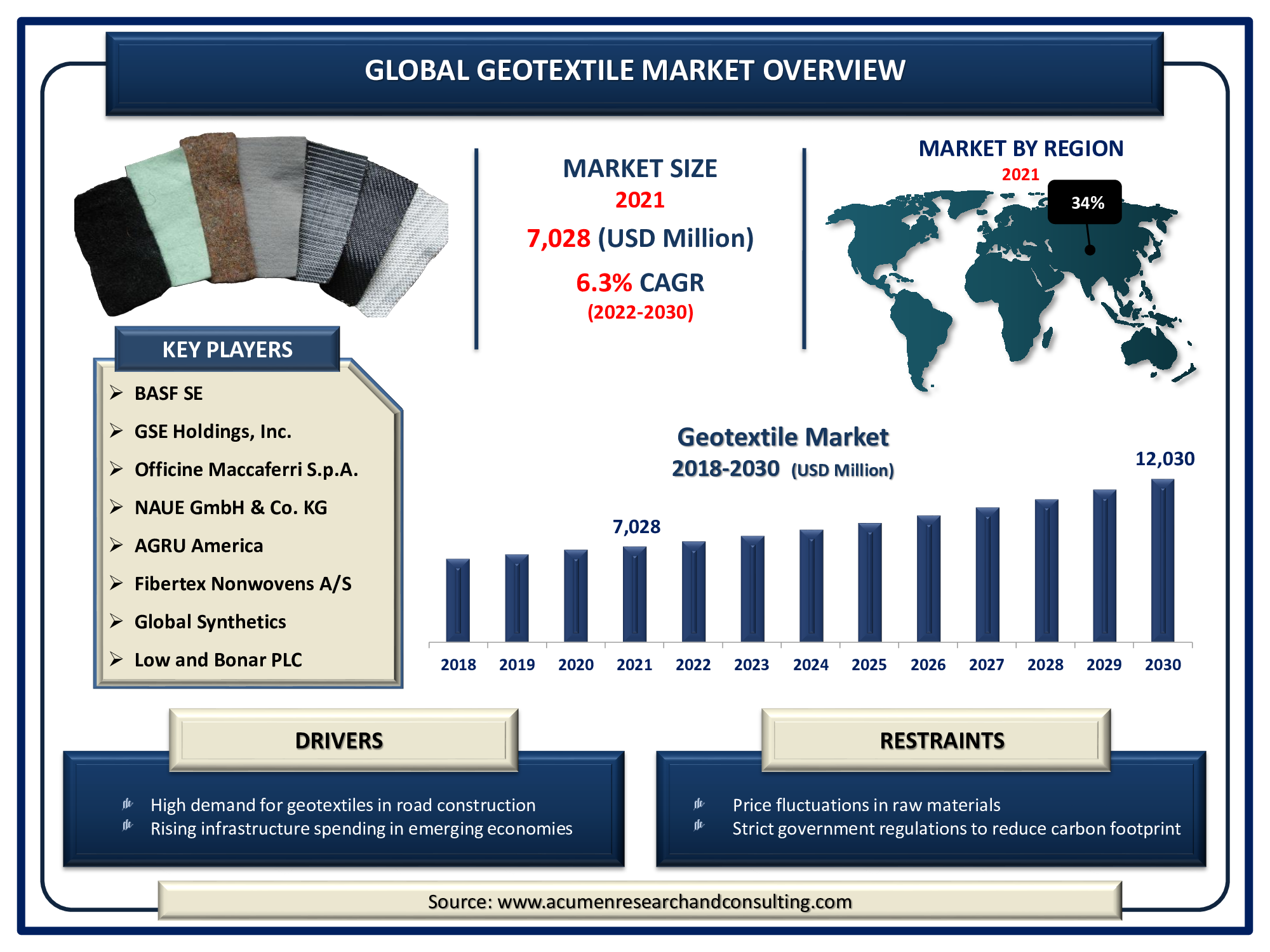 Geotextiles are permeable synthetic materials used in infrastructure development and construction activities to optimize soil properties. Geotextiles strengthen the suitability of poor soils for construction works by reinforcing, filtering, preserving, separating, and draining the soil. Geotextiles are commonly used to improve the physical properties of soil during the construction of roads, pipelines, embankments, and earth-retaining structures. Geotextiles perform filtration, reinforcement, drainage, cushioning, waterproofing, and separation. There are three types of geotextile materials: warp-knitted, open-mesh, and closed textile or non-woven textiles.

The growing market for fully functional and high-performance textile geosynthetics construction, agriculture, erosion and sediment control applications, as well as construction technology advancements, are expected to propel the geotextiles market forward. Due to their excellent properties such as fluid repellent activity and mechanical properties, these products have grown significantly in recent years. Increasing awareness of the functional advantages of products over conventional methods, such as superior load-bearing capacity, flexibility, high tensile strength, and permeability, has increased its permeability in multiple industries, which is the primary driving the geotextiles market value. It is constructed of synthetic polymeric materials such as polyester and polypropylene, which are less prone to decay in any chemical reaction and provide excellent performance and reliability.

The increased use of geotextiles in a variety of construction operations such as coastal areas, drainage structures, roadways, and garbage dumps to improve soil stabilization, as well as the product's increased adoption due to its long life and low cost, drive market growth. The increased use of geotextiles in mountainous regions to govern erosion caused by water sources such as rivers, as well as regulatory bodies' initiatives to enforce advertising policies to raise understanding of the benefits of geotextiles, all have an influence on the geotextiles market size. Additionally, rising infrastructure activity in emerging markets, rapid urbanization, and industrialization all benefit geotextile market trends. Additionally, the high demand for bio-based geotextiles and greater investment in nonwoven geotextile materials provide market players with lucrative opportunities over the forecasted timeframe.

Besides this, volatility in raw material prices, combined with insufficient control in emerging markets, is expected to impede the market growth. Additionally, the lack of technical expertise and knowledge in geotextiles in emerging nations is expected to present a threat to the geotextile market shares throughout the projected period.

The global geotextile market segmentation is based on material type, product type, application, and region.

In terms of material type, the synthetic segment accounted for the largest share in 2021. The synthetic segment is further subdivided into polypropylene, polyethylene, polyester, and others. According to the geotextile market forecast, the polypropylene material type segment is projected to expand significantly in the coming years. This expansion is due to its exceptional properties such as high chemical resistance, durability, and inorganic compounds. Polypropylene is also less expensive than other raw materials, making it a popular material, particularly in building and construction.  Rising demand for polypropylene from emerging economies, particularly China, India, and a few other Asian countries, is expected to have an impact on raw material cost trends over the forecast period. 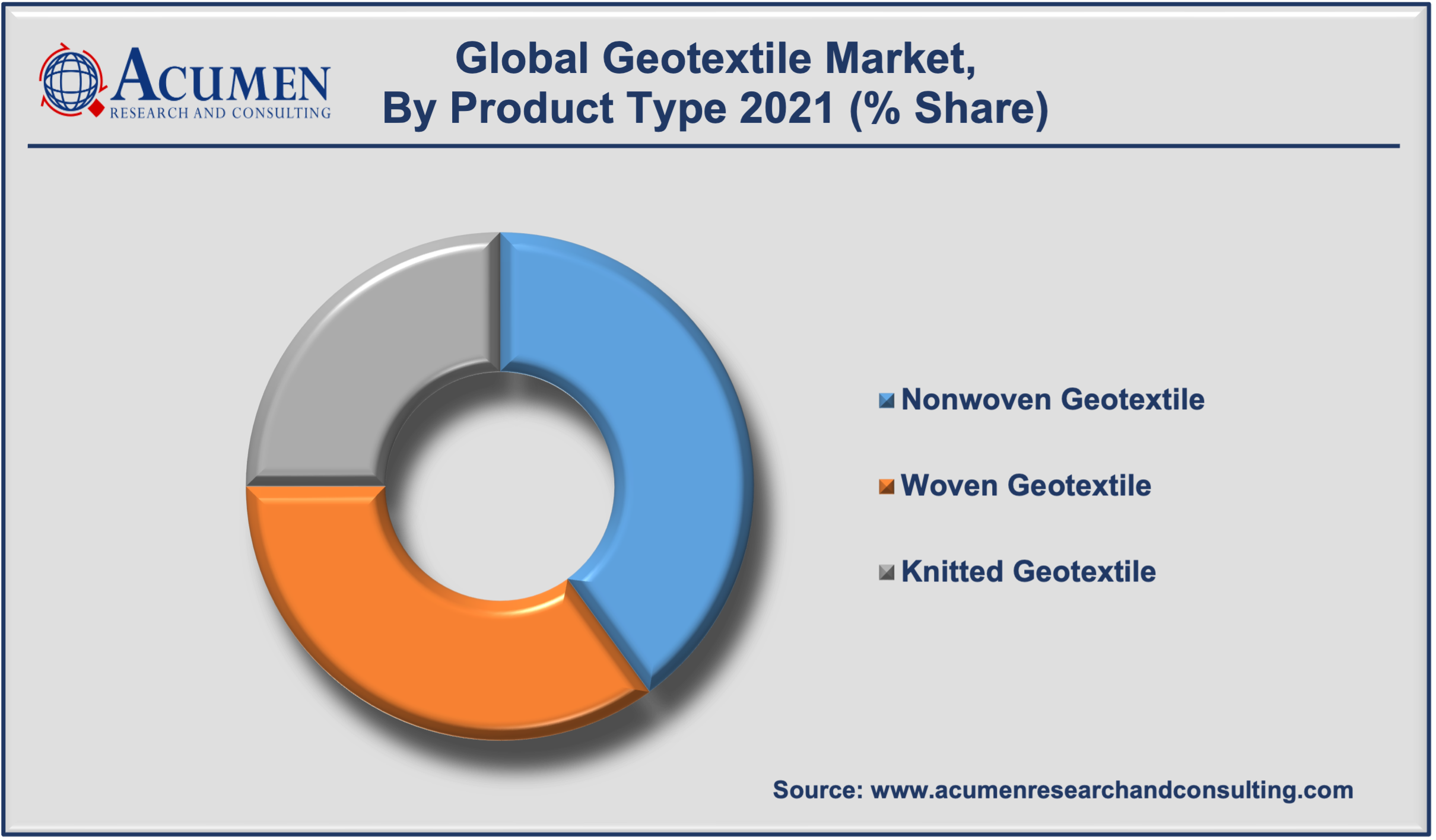 Based on product type, the nonwoven segment is expected to grow at a faster rate in the market during the forecasted years. Nonwoven geotextiles are high permeability geosynthetics formed of nonwoven components which are used in conjunction with geotechnical materials such as clay, rock, and so on as a component of construction projects. These polymers are frequently made from synthetic materials such as polyamide, polyethylene, polypropylene, polyester, and so on. Because of its widespread use in construction projects, decoration, automobiles, agriculture, hygiene products, and packaging, the segment led the market. Furthermore, advances in the use of nonwoven geotextiles within stormwater runoff subsystems, as well as the increasing longevity of dumping sites, are expected to support future growth. Due to their high tensile strength, efficiency, durability, and low cost, nonwoven geotextiles are also in high demand for road transport construction projects.

In terms of application, the road construction segment will lead the market in 2021. This large geotextiles market share is primarily due to geotextiles, which have proven to be the most convenient solution for ground stabilization issues, highway repair and rehabilitation, growing pavement life, cost savings, and improved road lifespan. These materials are used in highway construction for detachment and filtration since they prevent small granular materials and sand from migrating and fill gaps between roadways to enhance soil structure. It increases road stability and decreases the probability of water and wind erosion, thereby extending the road's lifespan. Consumer spending on automobiles, as well as government spending on transportation systems, should drive geotextile market demand even higher.

The Asia-Pacific region is held a major share of the global geotextiles market in 2021. This is due to the expansion of construction projects in India and China, as well as continuing infrastructure improvements. Additionally, rapid population growth, a skilled labor pool, expanded government infrastructure construction, and continuous improvement will all contribute to regional market growth. Geotextiles' widespread use in a variety of construction applications has fueled revenue growth. According to the researchers of the geotextiles market analysis, government spending on infrastructure projects has increased demand, which is propelling revenue generation. China is estimated to contribute massive revenue shares in the Asia-Pacific market in 2021. The geotextile market in India is expected to grow significantly in the coming years as a result of significant infrastructure investments by both the private and public sectors.

What was the market size of global geotextile market in 2021?

What will be the projected CAGR for global geotextile market during forecast period of 2022 to 2030?

Which region held the dominating position in the global geotextile market?

Asia-Pacific held the dominating share for geotextile during the analysis period of 2022 to 2030.

North America region exhibited fastest growing CAGR for geotextile during the analysis period of 2022 to 2030.

What are the current trends and dynamics in the global geotextile market?

Increasing construction project investment, growing consumption of green walls and roofs, and high demand for geotextiles in road construction are the prominent factors that fuel the growth of global geotextile market.

By segment material type, which sub-segment held the maximum share?

Based on material type, synthetic segment held the maximum share for geotextile market in 2021.