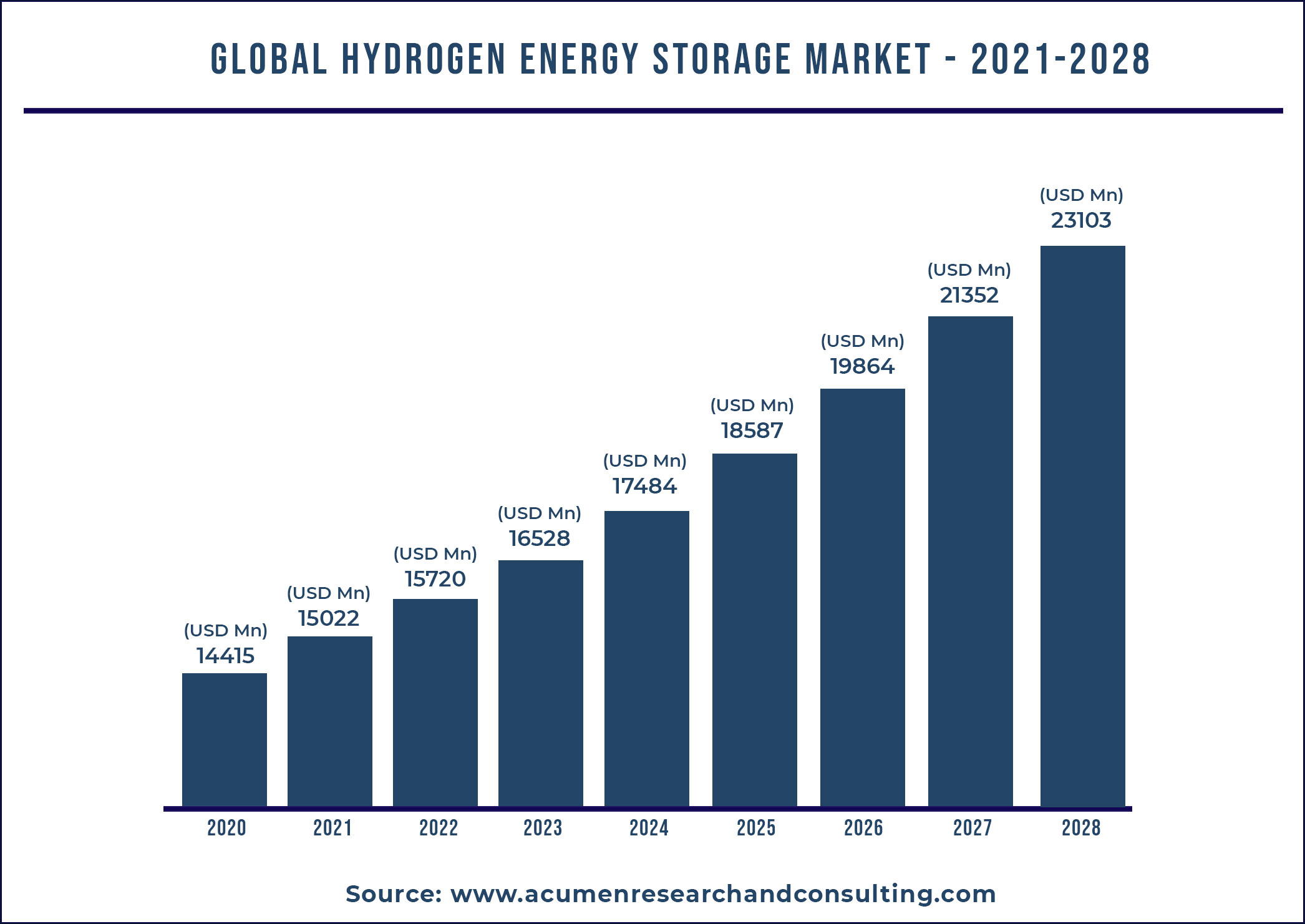 Hydrogen is a versatile energy carrier that may be created from a variety of sources and offers a variety of long-term energy storage options. For use in fuel cells, turbines, or internal combustion engines, hydrogen can be compressed, liquefied, or stored in solid or liquid form. The manufacturing and storage of hydrogen are the two biggest challenges. Approximately 48% of hydrogen is created from natural gas (NG) via steam methane reforming (SMR), 30% is a by-product of petroleum refining, 18% is derived from coal, and 4% is produced by water electrolysis. In the United States, oil refineries and ammonia plants create 59 percent of hydrogen, while catalytic reforming at oil refineries and Chlor-alkali plants produces about 36 percent.

Hydrogen is considered to be a critical energy storage vector for fully utilizing the benefits of renewable and sustainable energy. Hydrogen-related technologies have advanced rapidly in recent decades. Hydrogen energy storage systems provide numerous opportunities for improving the resilience and economics of energy supply systems such as the electric grid, gas pipeline systems, and transportation fuels. This is especially true when considering specific social goals and market drivers such as lowering carbon emissions, increasing supply reliability, and reducing consumption of traditional petroleum fuels.

Hydrogen's extensive usage in the global economy has two major challenges: (1) the cost of producing hydrogen from low-carbon sources, and (2) the sluggish development of hydrogen infrastructure, which is preventing universal acceptance. The cost of constructing hydrogen distribution infrastructure and transporting hydrogen over long distances are significant financial obstacles to the adoption of hydrogen-based technologies. Furthermore, large-scale central production will rely on market volumes to pay for capital expenditures associated with capacity expansion. Water electrolysis using renewable electricity could produce carbon-neutral hydrogen in the future. This distributed technique of hydrogen production employing electrolyzer units is seen as a promising short- to medium-term solution for hydrogen supply. 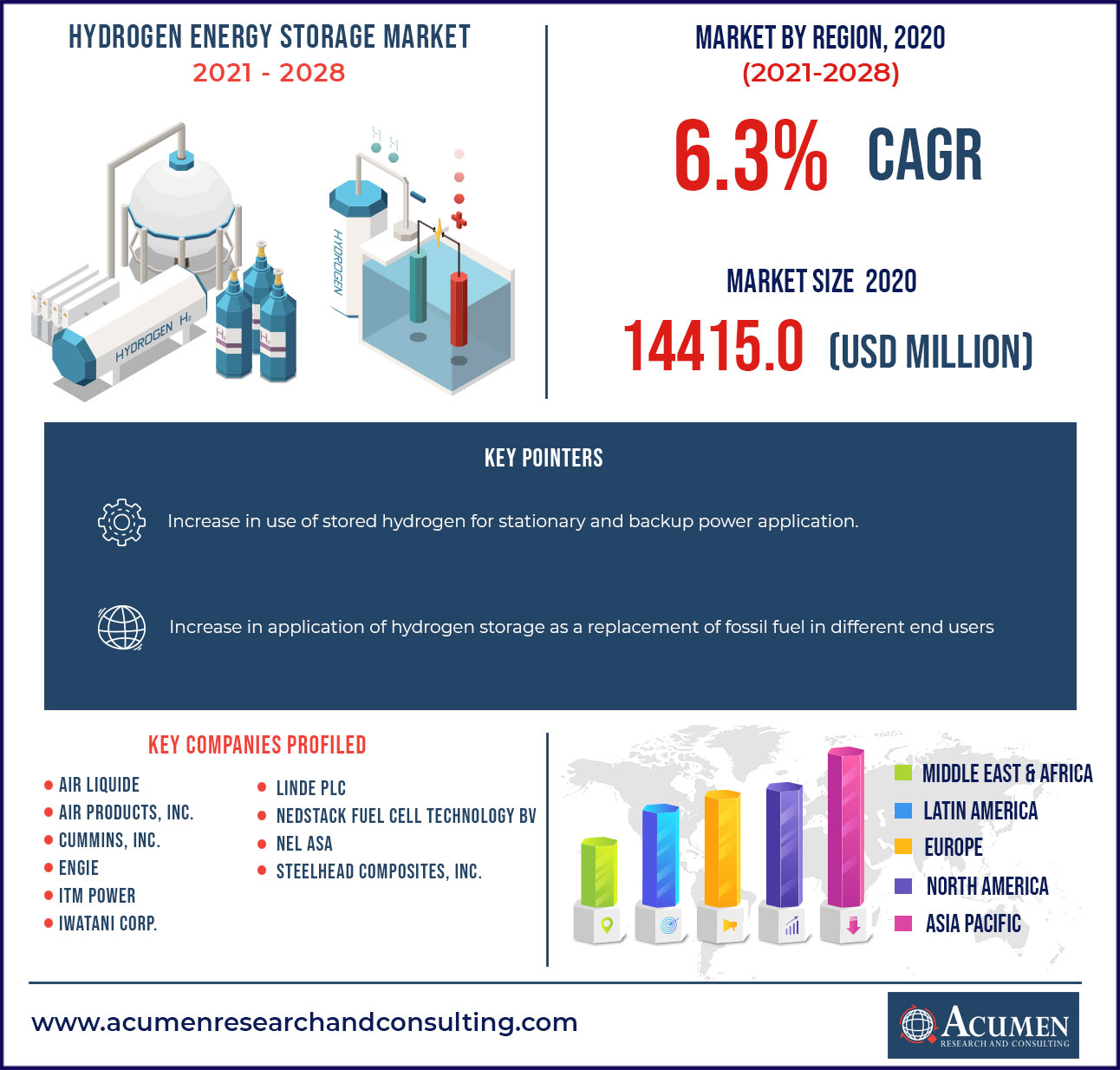 Hydrogen Energy: Fuel of the Future

Hydrogen and energy have a long history together, dating back over 200 years to the first internal combustion engines and continuing to become a critical component of today's refining industry. It is lightweight, storable, and energy-dense, with no direct pollutant or greenhouse gas emissions. Hydrogen must be adopted in sectors where it is currently almost non-existent, such as transportation, buildings, and power generation, to make a significant contribution to clean energy transitions. When hydrogen is combusted with oxygen, it becomes an energy carrier that can be used in internal combustion engines or fuel cells while emitting almost no greenhouse gases. Water vapor is the only significant emission. Furthermore, hydrogen is a versatile energy carrier that can be produced from a variety of energy sources and provides numerous opportunities for long-term energy storage.

Based on the state, hydrogen is stored into either a gas or a liquid form. The gas-type hydrogen energy storage segment presently holds significant market share and is expected to hold its dominant position over the forecast period as it is the easiest and cost-effective method compared with the liquefaction of the hydrogen. However, the storage of hydrogen as a gas typically necessitates the use of high-pressure tanks with tank pressures ranging from 350–700 bar [5,000–10,000 psi].

Based on the storage technology, the compression segment is the most preferred technology for storing hydrogen. The main advantage of using a compressed hydrogen storage system is the ability to quickly refuel vehicles in 3–5 minutes. In recent, 35 and 70 MPa nominal working-pressure compressed gas vessels are used for onboard automotive hydrogen storage. Given that the density of hydrogen deviates from ideal behavior at high pressures and increases much more slowly than the pressure, strong pressure vessels are required to withstand the higher pressures. Government agencies regulate the design and implementation of cylinders, which necessitates specific design standards and certifications.

Based on end-users, the utility segment is expected to grow significantly during the forecasting years. Due to hydrogen, utilities could use excess renewable energy that could be stored long-term for seasonal use or sold to other industries to generate new revenue streams. Furthermore, hydrogen is currently used in a variety of industries, ranging from chemical and refining to metallurgical, glass, and electronics. The primary application of hydrogen is as a reactant. However, it is also used as a fuel in space applications, as an O2 scavenger in metal heat treating, and for its low viscosity and density.

Asia-Pacific accounted for the highest revenue share in global hydrogen energy storage market in 2020, owing to the impact of productivity improvements. The Asia-Pacific’s emerging economies are adopting a variety of foreign equipment to increase production efficiency for hydrogen storage. Japan has the most hydrogen fuel stations per capita in the world. There were around 134 operational hydrogen refueling stations in the country as of March 2021 and the country aims to construct over 1,000 more hydrogen refueling stations for fuel-cell vehicles by 2030. During the forecast period, the North America hydrogen energy storage market is expected to grow at a significant CAGR. The rise in fuel cell applications, strict emission control regulations, and the use of cleaner fuels are the major factors driving the growth of hydrogen energy storage market. In the US, the United States Department of Energy (US DOE) had set specific targets for respective market participants in the automotive industry to focus on research and development with an objective to boost successful technical research on hydrogen storage.

How much was the estimated market size of global Hydrogen Energy Storage market in 2020?

The estimated market size of global Hydrogen Energy Storage market in 2020 was accounted to be USD 14,415 Million.

What will be the projected CAGR for global Hydrogen Energy Storage market during forecast period of 2021 to 2028?

The projected CAGR of Hydrogen Energy Storage during the analysis period of 2021 to 2028 is 6.3%.

Which region held the dominating position in the global Hydrogen Energy Storage market?

What are the current trends and dynamics in the global Hydrogen Energy Storage market?

By segment State, which sub-segment held the maximum share?

Based on State, gassegment held the maximum share for Hydrogen Energy Storage market in 2020