The Global Ionic Liquid Market Size accounted for USD 1,604 Million in 2021 and is estimated to achieve a market size of USD 7,117 Million by 2030 growing at a CAGR of 18.2% from 2022 to 2030. Growing environmental emphasis on green chemistry is expected to drive demand for the product as an organic solvent, propelling the ionic liquids market growth. Furthermore, rising demand from extractions and separations applications is predicted to fuel the ionic liquids market value over the forecast period. 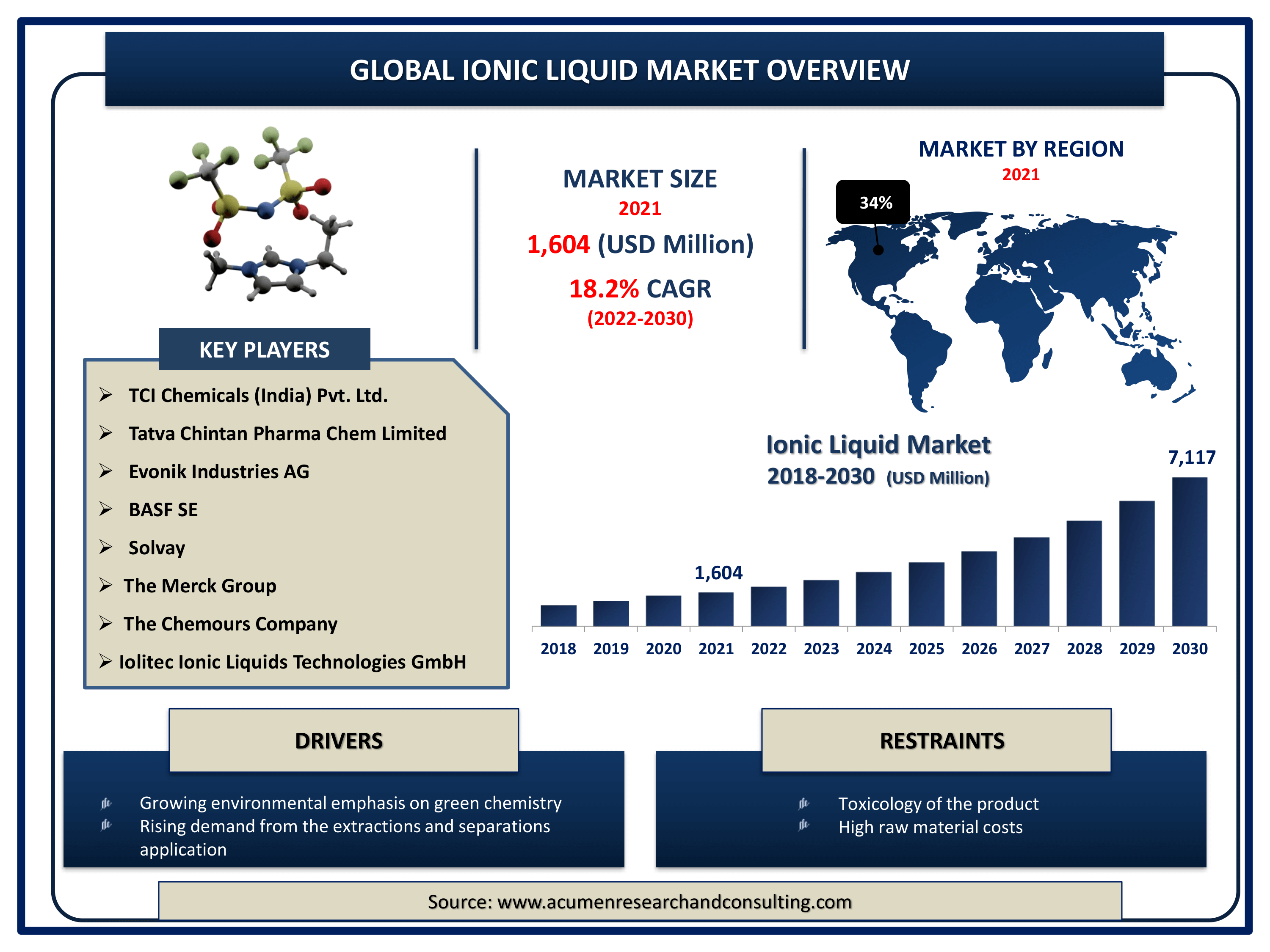 Ionic liquids (ILs) are salts made up of cations and anions that are usually liquids at or below 100 degrees Celsius. Unlike molecular liquids, ionic liquids have distinct properties that make them promising solvents for a variety of industrial applications. High polarity, negligible volatility, high thermal stability, high ionic conductivity, low melting point, and structural designability are some of the physicochemical properties. Furthermore, ionic liquids are regarded as promising solvents with distinct properties in organic synthesis, catalysis, electrochemistry, metal separation, gas separation, biomass processing, pharmaceuticals, tribology, and energy storage devices such as batteries, supercapacitors, and fuel cells, among others.

In drug discovery and development, it is estimated that approximately 40% of commercialized drugs and 90% of under-study drugs have inadequate pharmaceutical properties, severely limiting therapeutic efficacy. As a result, there is a growing need to identify the strategies responsible for improving the delivery of such drugs. Ionic liquids are a novel class of liquids composed of organic salts of particular interest, either alone or in combination with drug delivery systems. Furthermore, there is a growing interest in ionic liquids for drug solubility, formulation, and drug delivery, with a focus on nanotechnology. Such factors drive global ionic liquid market trend.

According to a report released by the PubAg U.S. DEPARTMENT OF AGRICULTURE, ionic liquid salts (ILs) are currently one of the key trends in modern chemistry. Furthermore, ILs are thought to be advantageous replacements for traditional organic solvents, and thus much more environmentally friendly. Furthermore, ILs can be easily produced to tailor physicochemical properties to specific applications, as is currently happening with several separation processes. This has a positive impact on the overall growth of the ionic liquids market.

The worldwide ionic liquid market segmentation is based on the application, and geography. 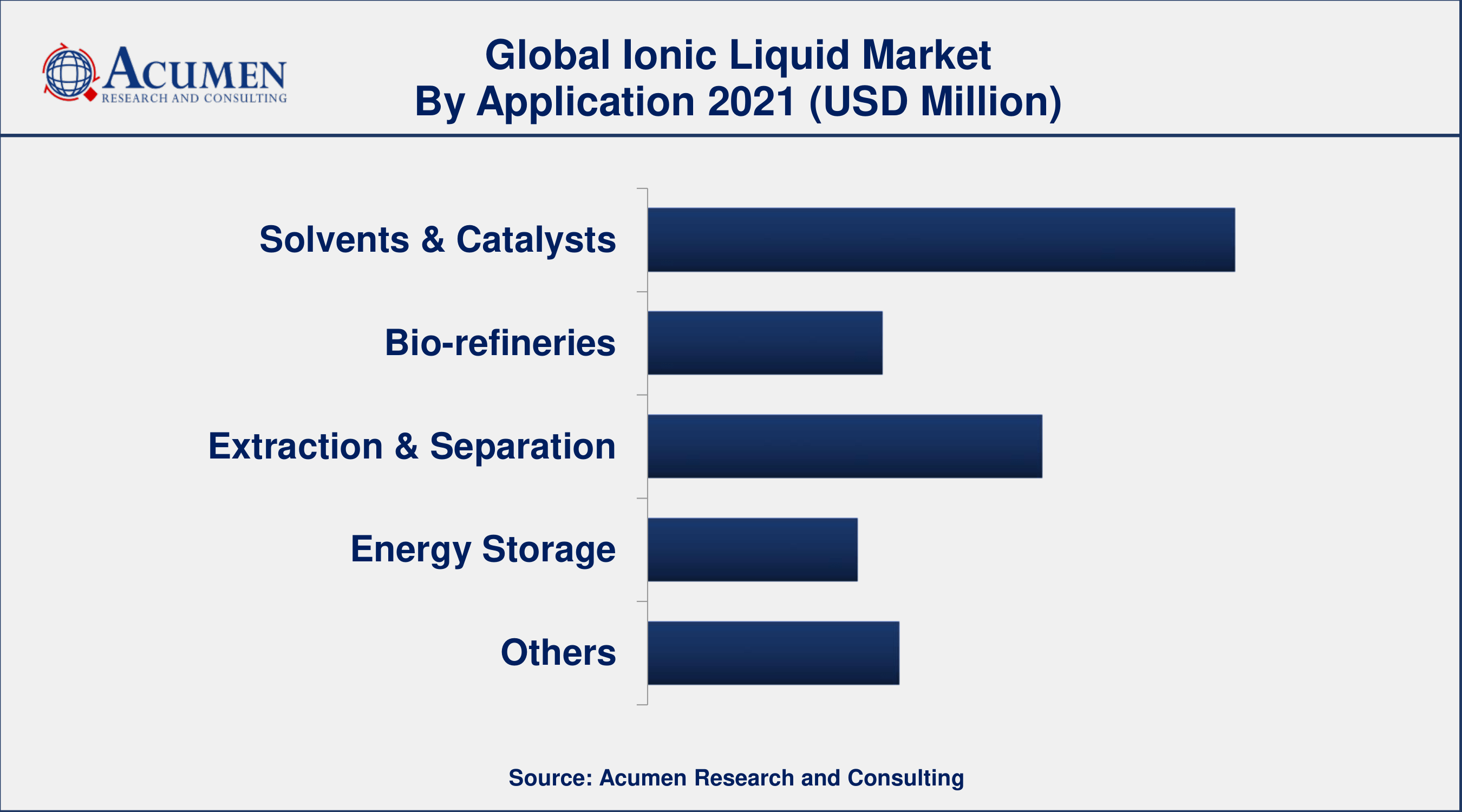 According to the ionic liquid industry analysis, the solvents and catalysts segment held the largest share of the market in 2021 and will continue to do so throughout the forecast period. According to a Royal Society of Chemistry report, basic ionic liquids have been shown to catalyze a wide range of organic reactions, particularly chemical reactions. Furthermore, due to their unique structures and properties, ionic liquids show promising results for capturing and activating CO2, making them ideal alternatives to volatile organic solvents or catalysts for CO2 transformation. Such factors have a positive impact on segmental growth, which in turn contributes to market growth overall. 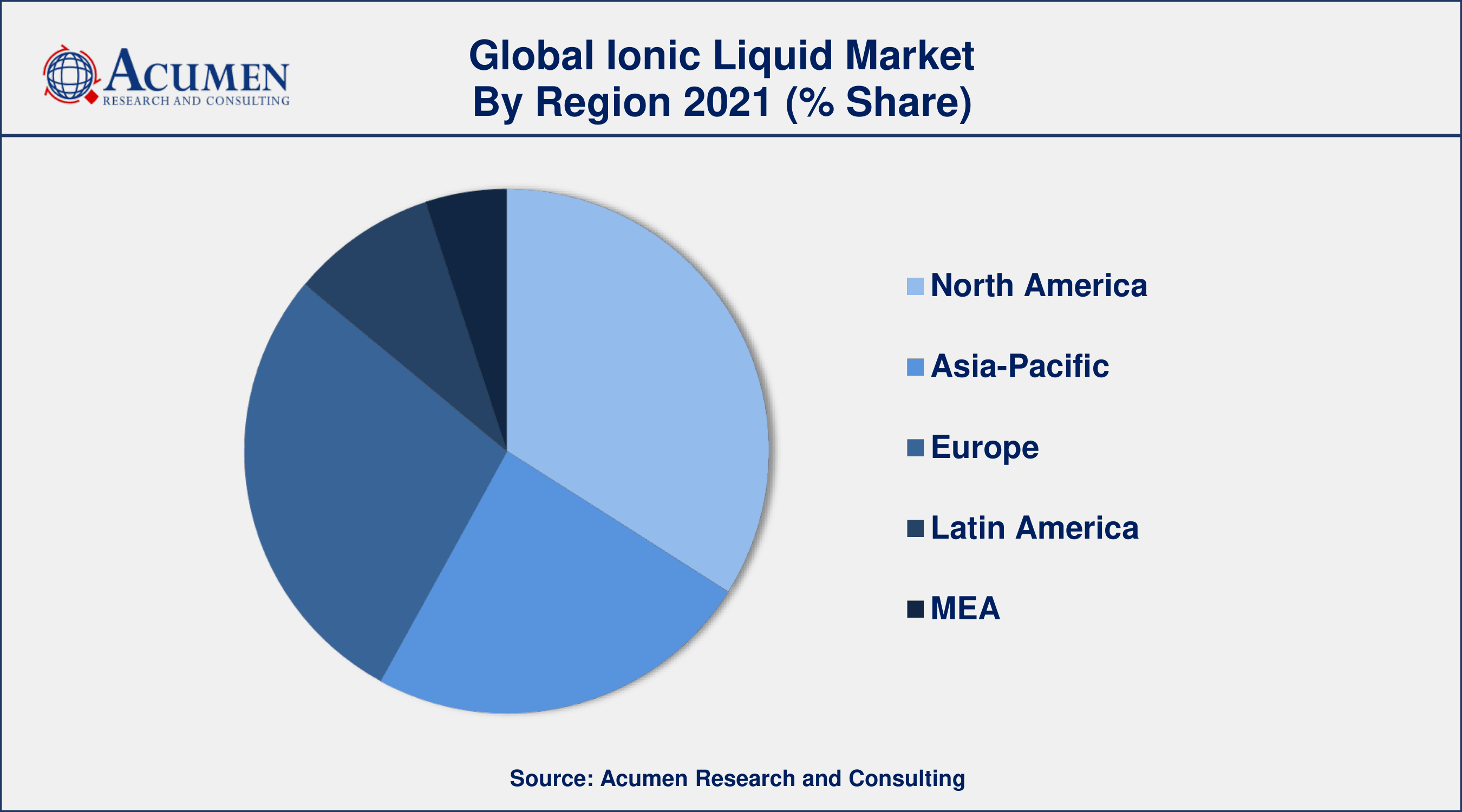 North America holds the lion's share of the ionic liquids market in 2020 and will continue to do so throughout the forecast period. Among North American provinces, the United States has seen a surge in investment in automotive technologies, which has resulted in the high utilization of ionic liquids. According to an ACS Publications report, ILs have been identified as a candidate additive with superior friction and wear reduction capabilities in the automotive industry. Furthermore, the presence of major players in North American provinces fuels the growth of the overall ionic liquid market.

What is the size of global ionic liquid market in 2021?

The estimated value of global ionic liquid market in 2021 was accounted to be USD 1,604 Million.

What is the CAGR of global ionic liquid market during forecast period of 2022 to 2030?

Which region held the dominating position in the global ionic liquid market?

North America held the dominating ionic liquid during the analysis period of 2022 to 2030.

Asia-Pacific region exhibited fastest growing CAGR for ionic liquid during the analysis period of 2022 to 2030.

What are the current trends and dynamics in the global ionic liquid market?

Growing environmental emphasis on green chemistry and rising demand from the extractions and separations application drives the growth of global ionic liquid market.

By application segment, which sub-segment held the maximum share?

Based on application, solvents & catalysts segment is expected to hold the maximum share of the ionic liquid market.