Light amplification by stimulated emission of radiation (LASER) is a type of electromagnetic radiation that sends an equal amount of light in terms of intensity and wavelength that combines to form a high-energy and highly coherent light pulse. Laser technology now plays an important role in the modern world, as it has a wide range of applications in a variety of fields. Barcode scanners, laser printers, optical disc drivers, cutting and welding materials, semiconducting chip manufacturing, law enforcement devices, and free space optical communication are a few of the amazing applications of laser technology. Laser technology is also used in DNA sequencing instruments, hair removal products for surgery, and skin treatments. It is also effective in the treatment of gallbladder and kidney stones.

There are numerous applications for tiny and powerful lasers, but one of the most common applications is for the treatment of glaucoma. Laser surgery is increasingly popular for glaucoma treatment as it's a quick, painless, and effective treatment option. In 2018, Q-Peak began working in collaboration with a medical equipment supplier on a variant of the Moonbow CB-G laser source, one of the most closely based practices conducted on Mars 2020, as the laser source in a small, portable, rugged unit to perform laser surgery in the field. Apart from that, various laser products are used for various procedures. Carbon dioxide (CO2) lasers, for example, make shallow cuts. These are used to treat superficial cancers such as skin cancer. Argon lasers are designed to make shallow cuts and can be used during photodynamic therapy to activate photosensitizing drugs. To kill more cancer cells, this type of cancer treatment combines light with chemotherapy. Furthermore, low-level laser therapy (LLLT), also known as cold laser therapy, uses light with wavelengths ranging from 600 to 980 nanometers to perform minor surgeries and promote tissue regeneration.

The development of basic lasers has now made huge progress. Hundreds of millions of them work reliably in tens of thousands of applications. According to laser fest reports, basic laser product innovation is on the rise. Some enhancements gradually increase the number of wavelengths, which gradually expands the laser's capabilities. X-rays with shorter wavelengths of a few Angstroms have shown promising results for biochemists to observe chemical reactions in a single molecule as they occur. Additionally, security is one of the most common applications. Lasers emitting millimeter waves at terahertz frequencies have the potential to assist airport personnel in performing a safe, yet thorough passenger body scan for hidden weapons. Other modifications include changing the laser light pulse rate or, more recently, the laser pulse shape. These customized pulse shapes can trigger chemical reactions by interacting with highly targeted molecules. Laser fusion is currently gaining traction in the global laser technology market value.

Furthermore, recent advances in laser technology are a significant contributor to alternative energy and play a critical role in emissions and environmental monitoring. According to laser fest reports, the Department of Energy's Lawrence Livermore National Laboratory is conducting tests at its National Ignition Facility to develop the world's largest laser system, which will open new doors for laser fusion-providing a virtually limitless carbon-free alternative energy source. Furthermore, laser technologies such as spectroscopy can be used to measure environmental impurities, monitor emission levels, water pollutants, and so on.

The worldwide laser technology market segmentation is based on the laser type, product, application, end-user industry, and geography. 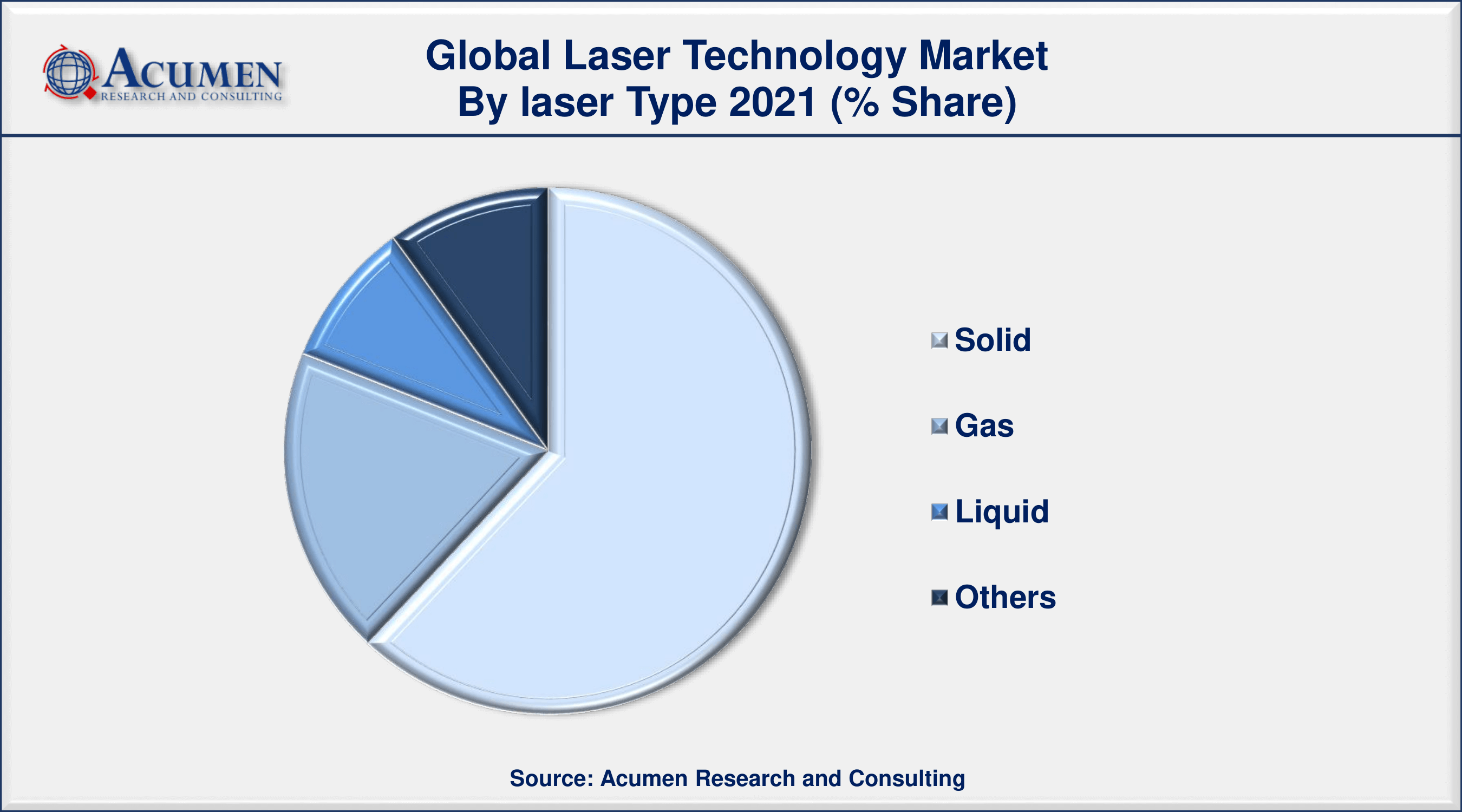 According to the laser technology industry analysis, the system product segment is predicted to account for the greatest market share in the global market. System product includes sales of various types of laser systems for marking and engraving, welding and brazing, cutting and scribing, cladding and coating, and other multi-functional laser technologies. The ability of these systems to perform a wide range of functions expands their utilization across several industry verticals involving commercial, industrial, medical, and automotive.

According to the laser technology market forecast, the optical communication segment is expected to have the largest market share in the coming years. The use of optical communication in manufacturing and other industrial sectors results in better and more precise industrial processes. This is one of the most significant factors influencing the growth of the optical communication segment. The National Aeronautics and Space Administration (NASA) has created a new laser beam pinpointing technology for use in optical communication in space. The Artemis Program for CubeSats in Low-Lunar Orbit is one possible application (LLO). Current architectures employ dynamical systems (i.e., moving parts such as fast-steering mirrors (FSM) and/or gimbals) to direct the laser to the ground terminal and may employ vibration isolation platforms (VIP).

What is the size of global laser technology market in 2021?

The estimated value of global laser technology market in 2021 was accounted to be USD 11,579 Million.

What is the CAGR of global laser technology market during forecast period of 2022 to 2030?

The projected CAGR laser technology market during the analysis period of 2022 to 2030 is 8.7%.

Which region held the dominating position in the global laser technology market?

North America held the dominating laser technology during the analysis period of 2022 to 2030.

Asia-Pacific region exhibited fastest growing CAGR for laser technology during the analysis period of 2022 to 2030.

What are the current trends and dynamics in the global laser technology market?

Based on product, system segment is expected to hold the maximum share laser technology market.