The Global Lung Cancer Market Size accounted for USD 21.1 Billion in 2021 and is estimated to achieve a market size of USD 67.9 Billion by 2030 growing at a CAGR of 14.1% from 2022 to 2030. The global lung cancer market growth is predicted to expand rapidly as the incidence of lung cancer rises. Furthermore, rising R&D and product approvals will contribute to the expansion of the lung cancer market value throughout the forecast period. 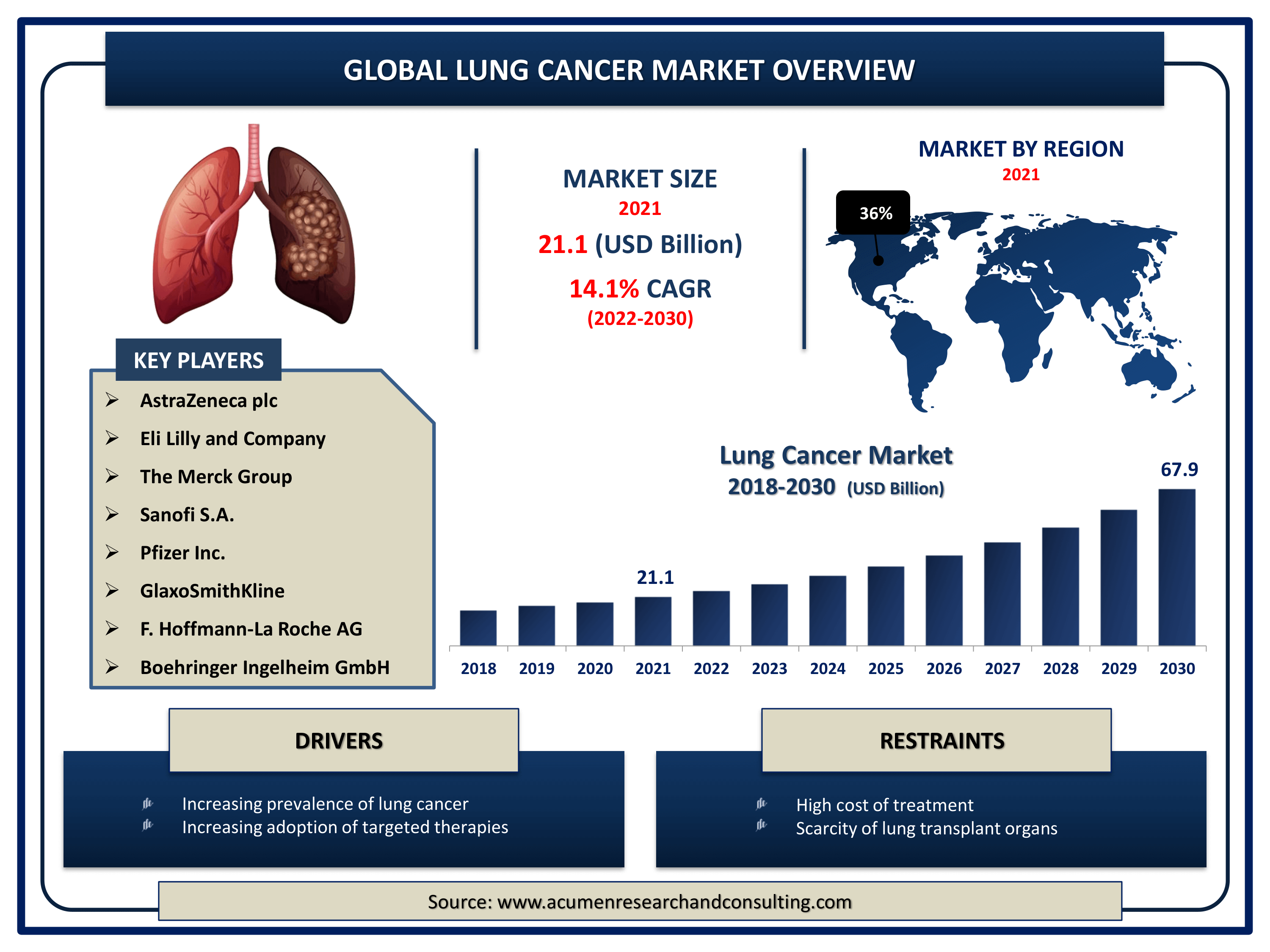 What Is New In The Lung Cancer Market?

As per the report released by the Lung Cancer Foundation of America., Biomarker testing is key in today’s world of personalized medicine. Lung cancer biomarker testing, also known as genetic mutation testing, or genomic testing, looks for the mutations, or “specific biomarkers” in the cells of a tumor. These biomarkers can be used to help a lung cancer patient decide on the best course of treatment. A new study has identified a potential biomarker of early-stage non–small cell lung cancer, according to a report released by the United States Department of Health and Human Services in January 2019. (NSCLC).  A protein called "SGLT2" is used to transport glucose into some cells and is a potential new biomarker. The biomarker could help noninvasively diagnose precancerous lung growths (called nodules or lesions) and early-stage lung cancers, as well as distinguish them from noncancerous lung nodules (benign).

Targeted treatments identify and attack specific types of cancer cells while causing less harm to healthy cells. Many targeted therapies for advanced lung cancer have become available in recent years, and more are in development. There are currently FDA-approved targeted therapies for lung cancer tumors with EGFR, ALK, ROS-1, NTRK, MET, RET, and BRAF V600E mutations. Additionally, it was not until the emergence of targeted therapy based on molecular typing that the survival period of patients with advanced NSCLC was improved to several years, such as the second generation ALK-TKI alectinib (Alecensa) achieved the PFS of first-line NSCLC patients with ALK fusion up to 34.8 months, and the adverse reactions were greatly reduced, such as the adverse events of grade 3 or higher was lower with the third generation EGFR-TKI osimertinib (Tagrisso, 23%) than with platinum-pemetrexed (47%).

In the United States, lung cancer is by far the leading cause of cancer death in both men and women. Smoking is also a major risk factor for lung cancer. According to data released by the Centers for Disease Control and Prevention, cigarette smoking is responsible for approximately 80% to 90% of lung cancers in the United States (CDC). Furthermore, in 2016, approximately 38 million adults smoked, and approximately 3 million high school and middle school students smoked in 2017. Despite the fact that the proportion of adult smokers is higher, the geographic patterns of cigarette use among adults and youth are similar. The states with the highest percentage of current adult smokers are concentrated in the Midwest, South, and Northeast.

The global lung cancer market segmentation is based on type, treatment, end-user, and geography. 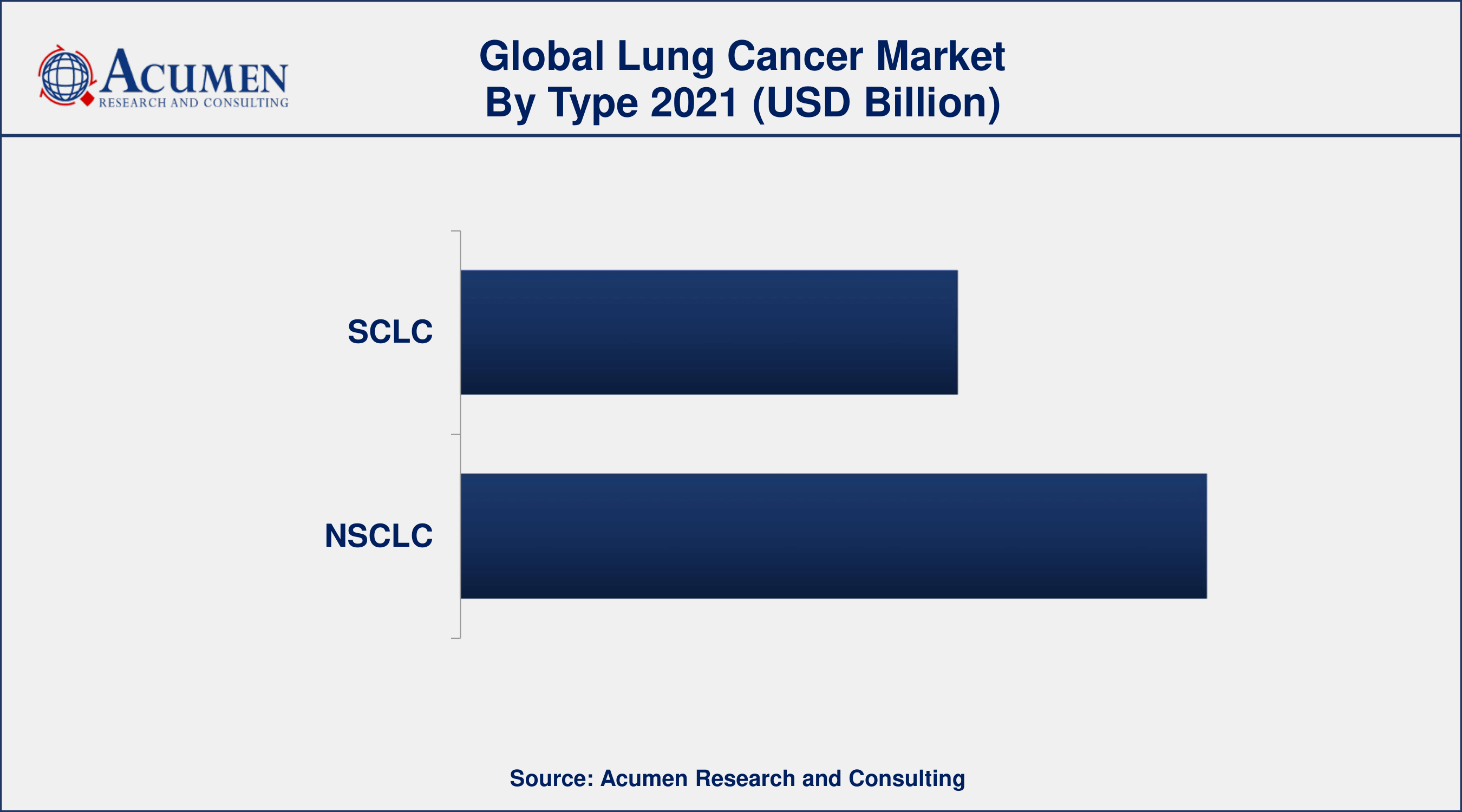 According to a lung cancer industry analysis, the NSCLC segment has dominated the global market by type in the past and is likely to do so again throughout the forecast timeframe. According to the American Cancer Society, Inc., NSCLC is more prevalent in the population, accounting for approximately 84% of all cases. This is one of the most important factors that have a positive impact on segmental growth, ultimately contributing to the growth of the global lung cancer market trend.

According to the lung cancer market forecast, the hospital and clinics segment is expected to be the fastest-growing category throughout the projected period. The rising number of cancer patients admitted to hospitals for treatment and diagnosis has greatly raised lung cancer sales from hospitals and clinics around the world. 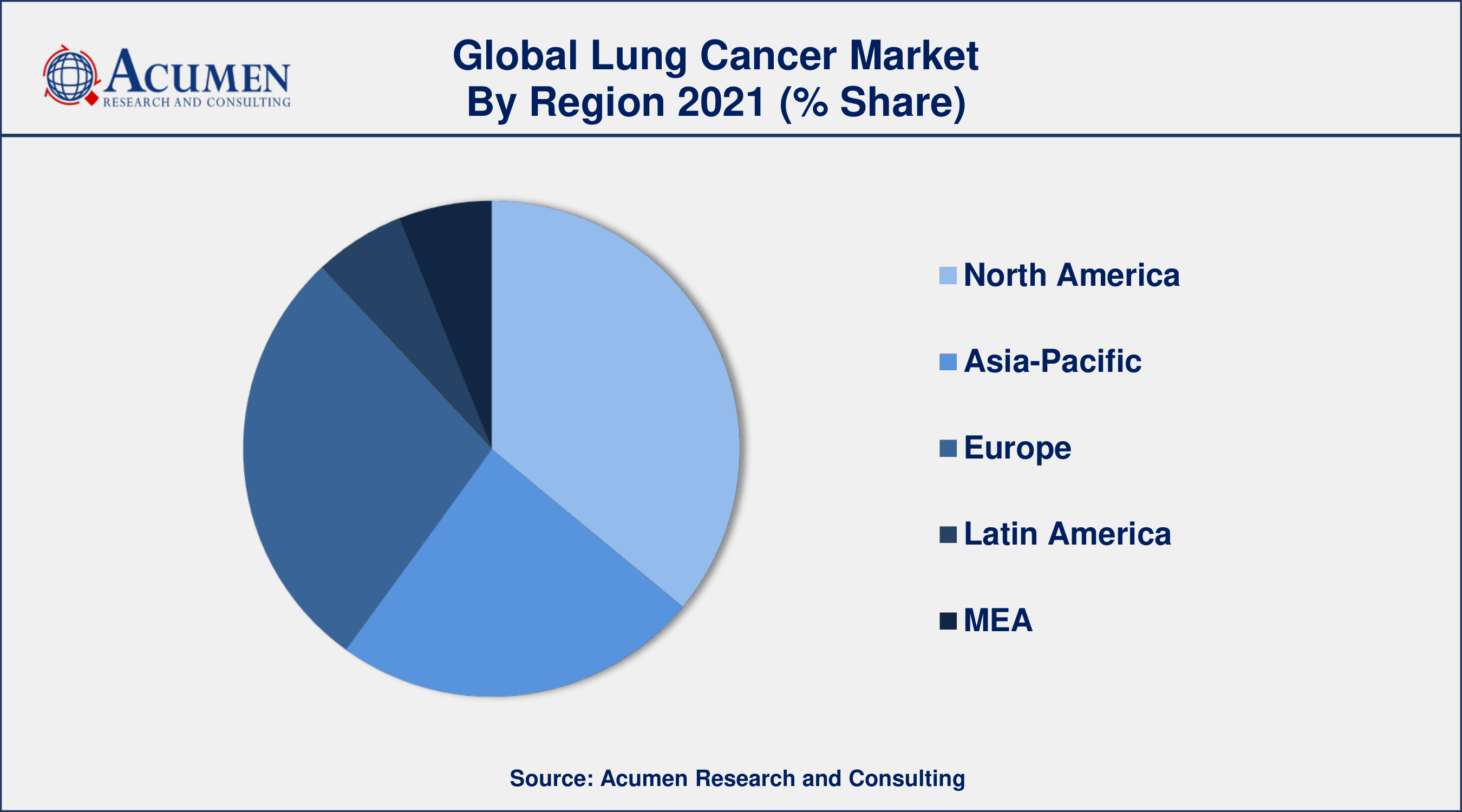 The market for lung cancer is dominated by North America. The large share of North America can be attributed to rising technological advancements in lung cancer treatment, rising incidence and prevalence of lung cancer, rising trend of smoking tobacco, increasing emphasis on early cancer diagnosis and treatment, and reimbursement availability.

Asia-Pacific, on the other hand, is expected to have the fastest-growing CAGR in the lung cancer treatment market. Rising regulatory approvals and increased adoption of advanced therapeutics in this region are important factors that contribute to regional growth, which in turn contributes to the growth of the lung cancer therapeutics market.

What is the size of global lung cancer market in 2021?

The estimated value of global lung cancer market in 2021 was accounted to be USD 21.1 Billion.

What is the CAGR of global lung cancer market during forecast period of 2022 to 2030?

Which region held the dominating position in the global lung cancer market?

North America held the dominating lung cancer during the analysis period of 2022 to 2030.

Asia-Pacific region exhibited fastest growing CAGR for lung cancer during the analysis period of 2022 to 2030.

What are the current trends and dynamics in the global lung cancer market?

By end-user segment, which sub-segment held the maximum share?

Based on end-user, hospitals & clinics segment is expected to hold the maximum share of the lung cancer market.