Methanol (CH3OH) is the simplest alcohol and is used to make hundreds of daily items such as plastics, paints, automobile parts, and construction materials. Methanol is also a renewable energy source that can be used to power vehicles, buses, ships, fuel cells, boilers, and cook stoves. Methanol is increasingly being used in a variety of novel applications around the world to address rising energy demand. Methanol is a versatile chemical that may be found in a wide range of everyday items, as well as automobile parts and the creation of other valuable compounds. 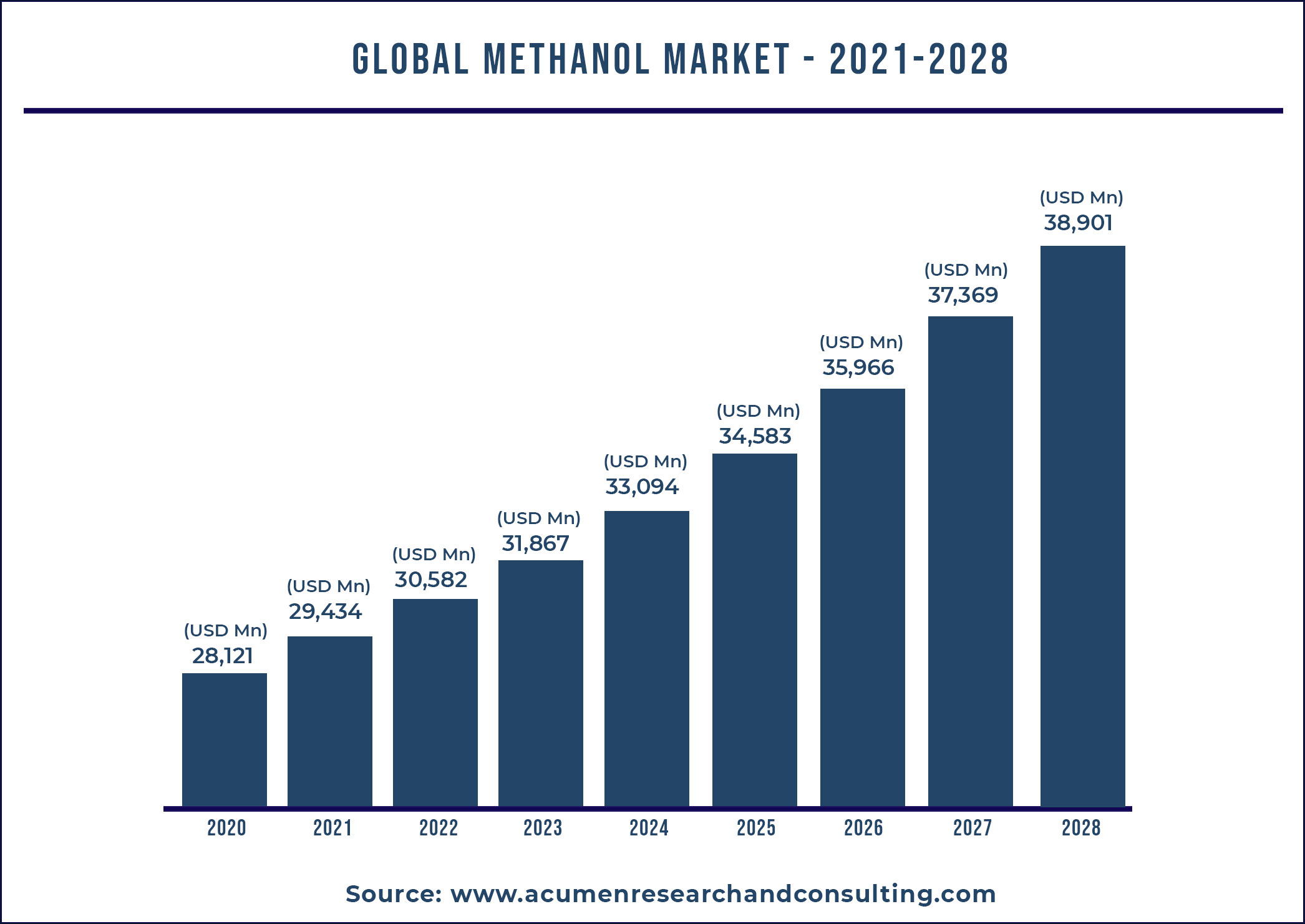 Renewable methanol reduces carbon emissions by 65 to 95 percent when compared to fossil fuels, depending on the feedstock and conversion process. This is one of the most significant reductions of any fuel now being researched to replace gasoline, diesel, coal, and methane. Furthermore, there are no sulphur oxides (SOx), low nitrogen oxides (NOx), and no particulate matter emissions when pure methanol is burned. Growing awareness of the threat posed by man-made climate change has prompted government agencies, industry, and science to search for alternative sources of energy to power economic activity. Methanol is used as a renewable fossil fuel in this factor.

Based on the feedstock, the natural gas segment holds the largest market shares in 2020. Natural gas is the most common feedstock for methanol production due to abundant resources, a low price level subject to moderate volatility, and low impurity content. The production of methanol in a single step via partial oxidation of methane is a promising new catalytic process that opens up new avenues for natural gas utilization. 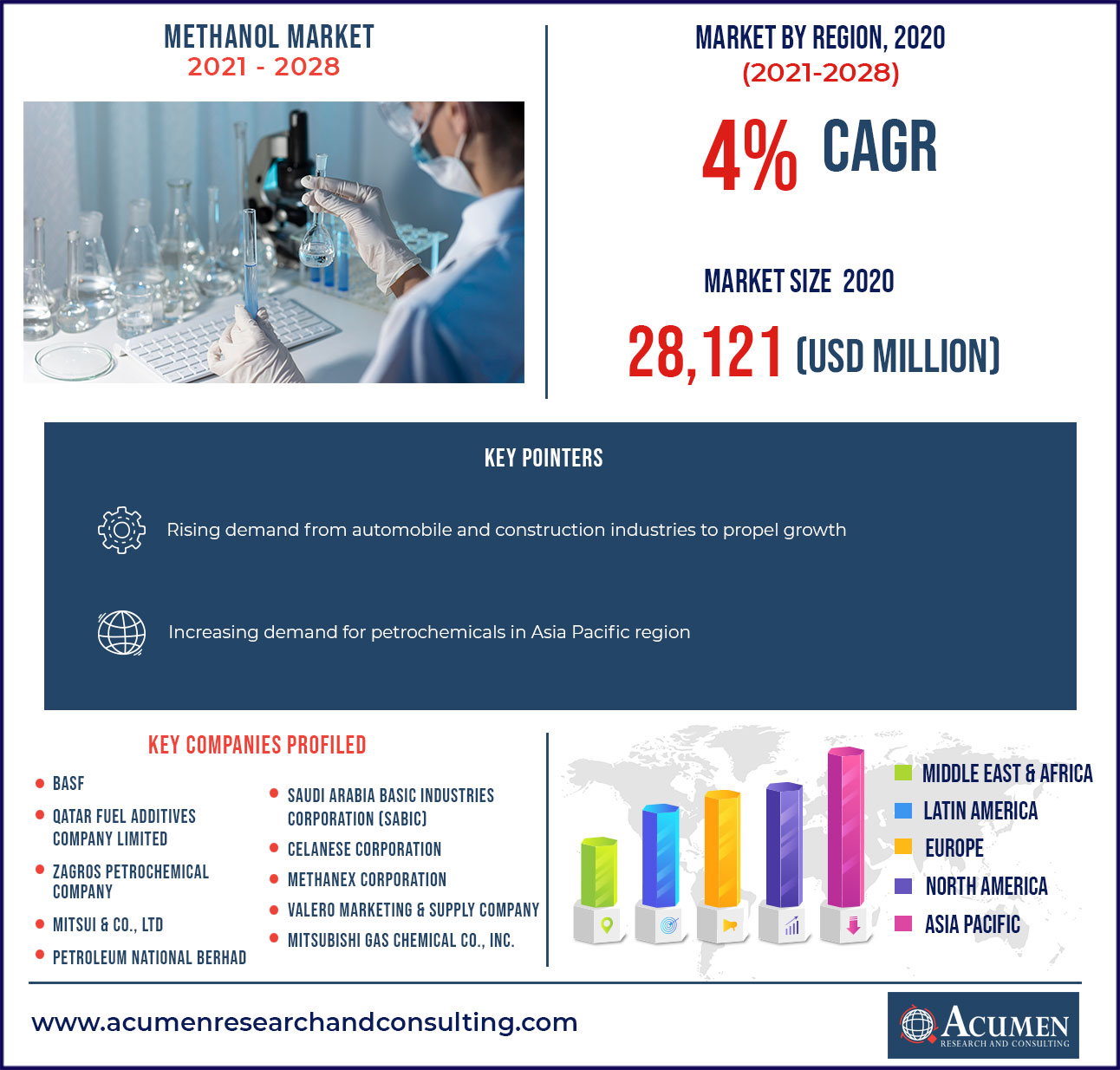 Based on the derivatives, the formaldehyde segment will dominate the market in 2020. Methanol is a key component in the manufacturing of formaldehyde, a colorless, flammable, and odorous gas. Formaldehyde is synthesized through the catalytic oxidation and dehydrogenation of methanol with either silver or a metal oxide catalyst.Formaldehyde is used in almost 50,000 product manufacturing facilities in the United States alone due to its vast range of applications. However, the entire methanol industry is being driven by increased formaldehyde demand.

Based on the end-user industry, the construction segment held the largest market shares in 2020. Methanol is highly used in building and construction industry for manufacturing engineered wood products. Thus, growing commercial and residential construction activities and rising standard of living is also propelling expansion in the global methanol market. However, methanol is a highly versatile chemical used to make adhesives, paint, and plywood used in construction. Moreover, the automotive segment is expected to show significant growth during the forecasting period owing to the rising used of methanol as fuel to control the emission.

The Asia Pacific region will dominate the methanol market in 2020, with countries such as China and India consuming the most methanol’s applications. Carbon Recycling International collaborated with Geely Holdings and Zixin Industrial Co. in 2017 to promote and develop renewable methanol production facilities in China. Furthermore, India is the world's third-largest emitter of energy-related carbon dioxide. Thus, in order to reduce carbon dioxide emissions, India has installed a Methanol Production capacity of 2 MT per year. According to the NITI Aayog plan, Indian High Ash coal, Stranded gas, and Biomass can produce 20 MT of methanol per year by 2025.

The global market is splintered. Key players are investing in research and development in order to serve a wide range of markets. Many companies increase their market presence by expanding manufacturing plants and acquiring new businesses.

How much was the estimated value of the global Methanolmarket in 2020?

The estimated value of global Methanol marketin 2020 was accounted to be US$28,121 Mn.

What will be the projected CAGR for global Methanol market during forecast period of 2021 to 2028?

Which region held the dominating position in the global Methanol market?

What are the current trends and dynamics in the global Methanol market?

Rising concern to reducing the emission, increasing demand for petrochemical as well as increasing use as fuel in automotive and fueling applications are the prominent factors that fuel the growth of global Methanol market

By segment Feedstock, which sub-segment held the maximum share?

Based on Feedstock, Natural Gas segment held the maximum share for Methanol market in 2020