The Global Microprocessor Market Size accounted for USD 111.3 Billion in 2021 and is estimated to achieve a market size of USD 163.8 Billion by 2030 growing at a CAGR of 4.5% from 2022 to 2030. The global microprocessor market value has recently gained traction due to its use in digital consumer products, desktop computers, and telecommunications, as well as its role as the nervous system of servers, Personal computers, and data centers. Furthermore, the microprocessor market growth is likely to expand further during the projected timeframe due to the rising use of microprocessors in cellular phones and the growing use of integrated computer processors in the medical electronics sector. 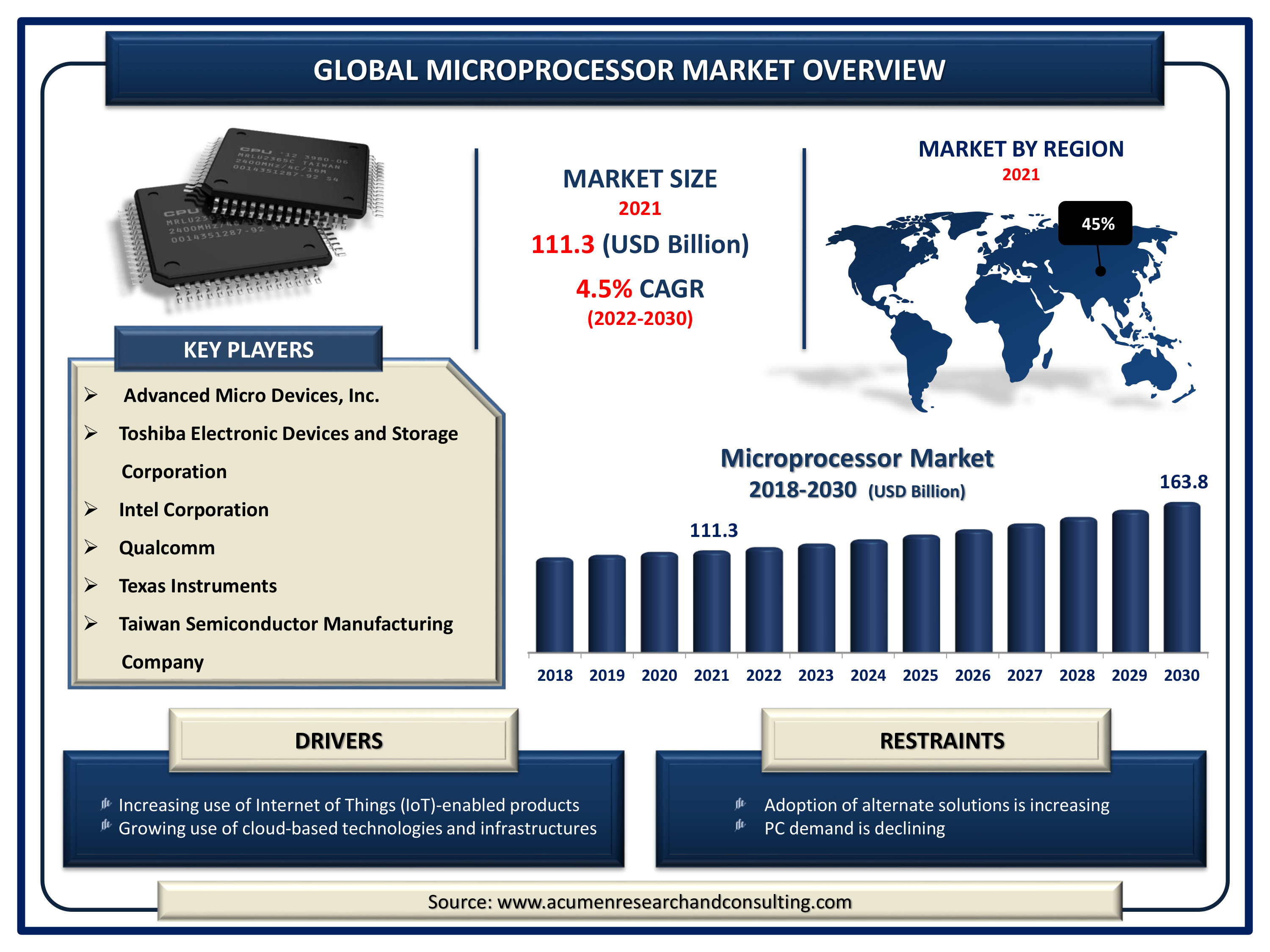 A microprocessor is an essential component of computer architecture, without which the user will be unable to perform any tasks on their computer. It is a programmable device that accepts input, performs arithmetic and logical operations on it, and produces the desired output. A microprocessor is a digital device on a chip that can retrieve instructions from memory, decode and execute them, and return results. A microprocessor is an electronic component that is integrated into a single integrated circuit (IC) and contains millions of small components that work together, such as diodes, transistors, and resistors. This chip performs a variety of functions, including timing, data storage, and interaction with peripheral devices. These integrated circuits are found in a variety of electronic devices, including servers, tablets, smartphones, and embedded devices.

According to a report published by the Institution of Engineering and Technology, the increasing use of artificial intelligence (AI) is upscaling many standard types of IT workloads as well as powering new services powered by advanced algorithmic data processing and machine learning techniques. There is no universally accepted definition of an AI chip. According to the Beijing Innovation Centre for Future Chips (ICFC), any type of microprocessor used for AI applications can be referred to as an AI chip. As a result, many novel designs and methods for AI applications have emerged, covering all stages of microprocessor construction, from materials and devices to circuits and architectures. According to the study, by 2025, AI-related processors could account for nearly 20% of total microprocessor demand, worth approximately US$67 Bn. In 2019, a slew of new AI chips was released by a variety of high-tech companies, ranging from incumbent microprocessor vendors (such as AMD, Intel, IBM, and Qualcomm) to cloud service providers (AWS, GPC, and Alibaba) and investor-funded start-ups (like BrainChip, Cerebras, Graphcore, Groq, and Gyrfalcon Technology). Furthermore, some of the most innovative AI chip offerings have come from vendors with limited experience in the microprocessor sector – start-ups such as BrainChip, Cerebras, Graphcore, and Gyrfalcon Technology.

Despite the microprocessor's numerous advantages, there are some factors that limit and challenge the overall market's growth. Factors such as high microprocessor integrated circuit manufacturing costs, circuit design costs, increasing sales of low-cost mobile devices, decreasing shipment of individual computers, and high raw material prices are expected to limit the market. Furthermore, the growing popularity of consumer electronics, technological advancements, and rising demand for high processing speeds are some of the major factors driving the microprocessor market's growth. The market for microprocessors is expanding in the APAC region as the electronics industry expands, providing an opportunity for market participants to establish a strong market position.

The worldwide microprocessor market segmentation is based on the technology, application, and geography. 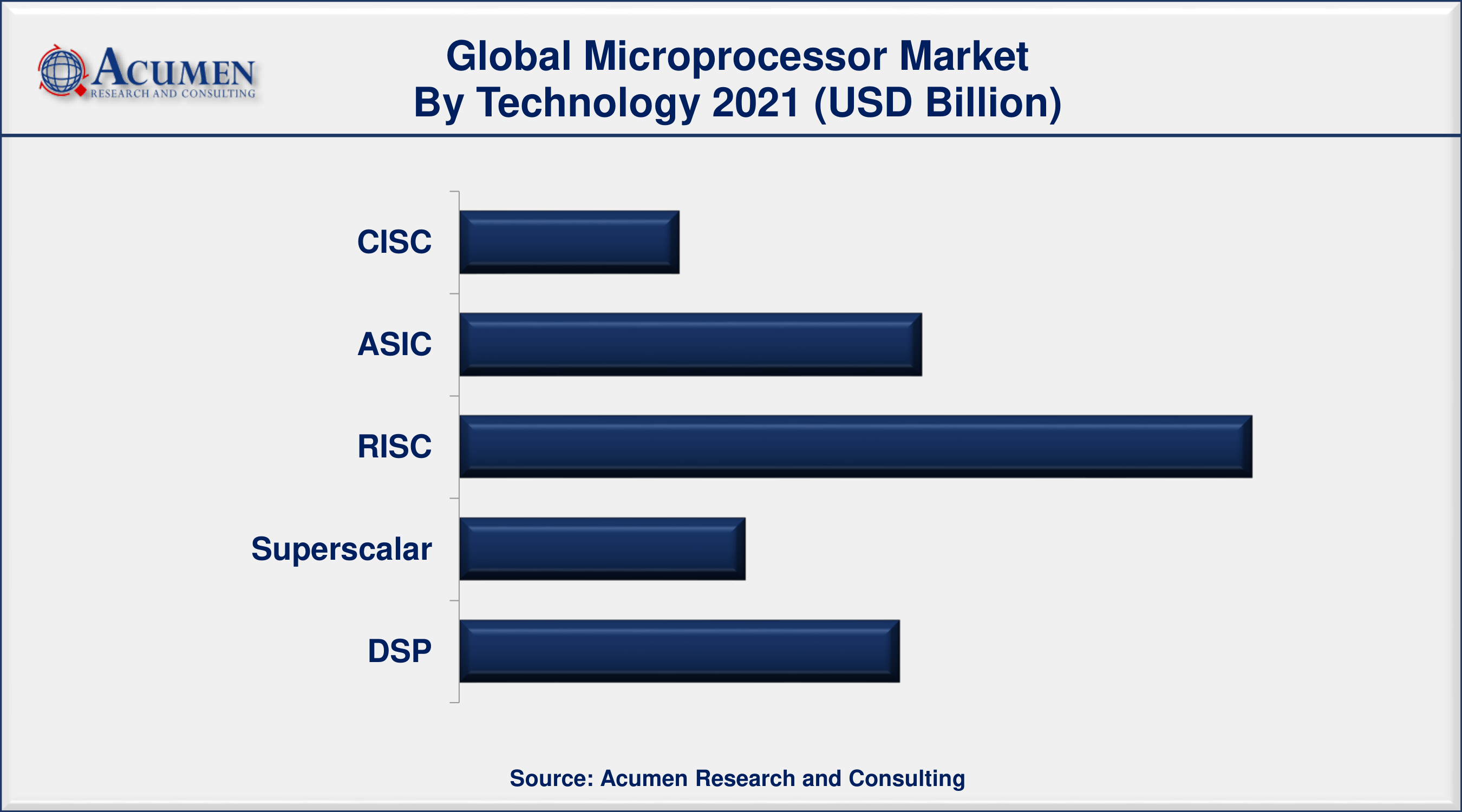 According to the microprocessor industry analysis, the Reduced Instruction Set Microprocessor (RISC) segment holds the maximum market share for the market in 2021. This is due to reduced chip complexity, which aids in maintaining constant instruction size without a microcode layer or associated overhead. 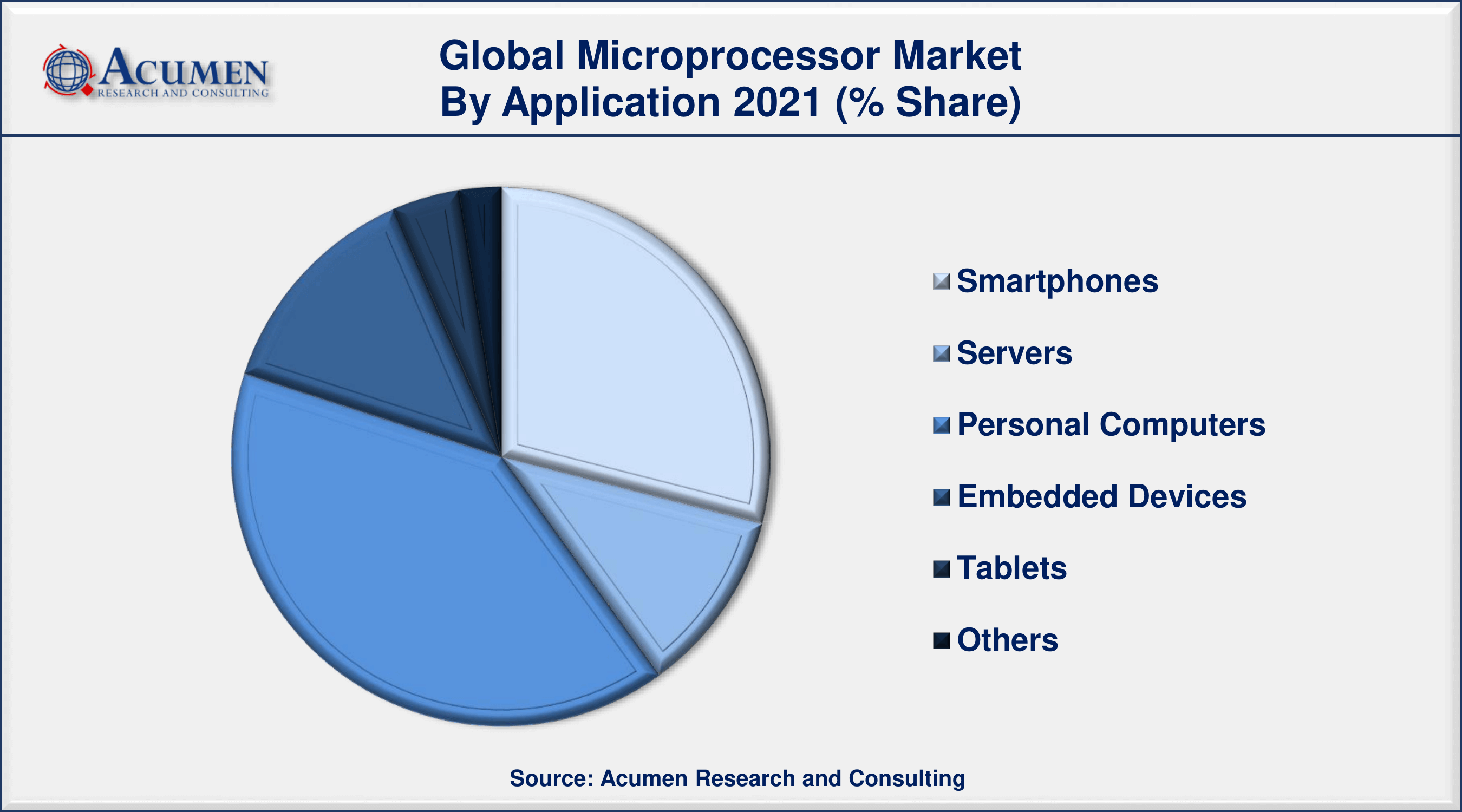 Furthermore, personal computer manufacturers are collaborating with technology providers to provide consumers with high-tech products. For example, in 2018, Samsung announced a collaboration with Avnet, Inc., a provider of System on Chip and ASIC solutions. The collaboration aimed to involve both companies in designing and manufacturing ASIC that will benefit consumers by utilizing the most recent and improved ASIC design solutions implemented with silicon ICs and advanced process technologies.

The increased adoption of digital transformation technologies such as deep learning, artificial intelligence (AI), and the Internet of Things (IoT) across various industries such as automotive, consumer electronics, healthcare, and industrial has fueled demand for microprocessors in the Asia-Pacific region. Furthermore, the emergence of Asia-Pacific as a manufacturing hub, as well as the adoption of automation processes to improve manufacturing efficiency, is driving up demand for microprocessors in this region.

North America, on the other hand, is expected to grow moderately during the analysis period. The presence of key players in this region is attributed to the growth. This is one of the most important factors influencing the growth of the microprocessor market in this region.

What is the size of global microprocessor market in 2021?

The estimated value of global microprocessor market in 2021 was accounted to be USD 111.3 Billion.

What is the CAGR of global microprocessor market during forecast period of 2022 to 2030?

The projected CAGR microprocessor market during the analysis period of 2022 to 2030 is 4.5%.

Which region held the dominating position in the global microprocessor market?

Asia-Pacific held the dominating microprocessor during the analysis period of 2022 to 2030.

North America region exhibited fastest growing CAGR for microprocessor during the analysis period of 2022 to 2030.

What are the current trends and dynamics in the global microprocessor market?

Increasing use of Internet of Things (IoT)-enabled products and equipment, as well as growing use of cloud-based technologies and server infrastructures drives the growth of global microprocessor market.

By application segment, which sub-segment held the maximum share?

Based on application, personal computers segment is expected to hold the maximum share of the microprocessor market.