Mining automation is referred to as the reduction of human labor from the mining process. The mining industry is in the process of becoming more automated. It can nevertheless necessitate a significant quantity of human capital, especially in underdeveloped countries where labor prices are cheap and there is no incentive to improve efficiency. According to estimates, today's mining activities are 28% less efficient than a decade earlier. Declining ore grades, rising costs, a scarcity of skilled personnel, market volatility, and demanding regulatory compliance have prompted the mining industry to seek measures to enhance productivity and efficiency. Business processes in the mining sector cover a wide range of rule-based and knowledge-based repetitive tasks that provide no value to the overall business or the end-users who perform them. Automation is a method for using software robots to automate monotonous and non-value-added labor. Increasing profitability in the mining business necessitates a continuous focus on efficiency, transportation, and metal extraction to maximize ore flow. However, incremental advancements are experiencing diminishing marginal returns, and the business is gradually shifting its focus to automation as the next source of opportunity. 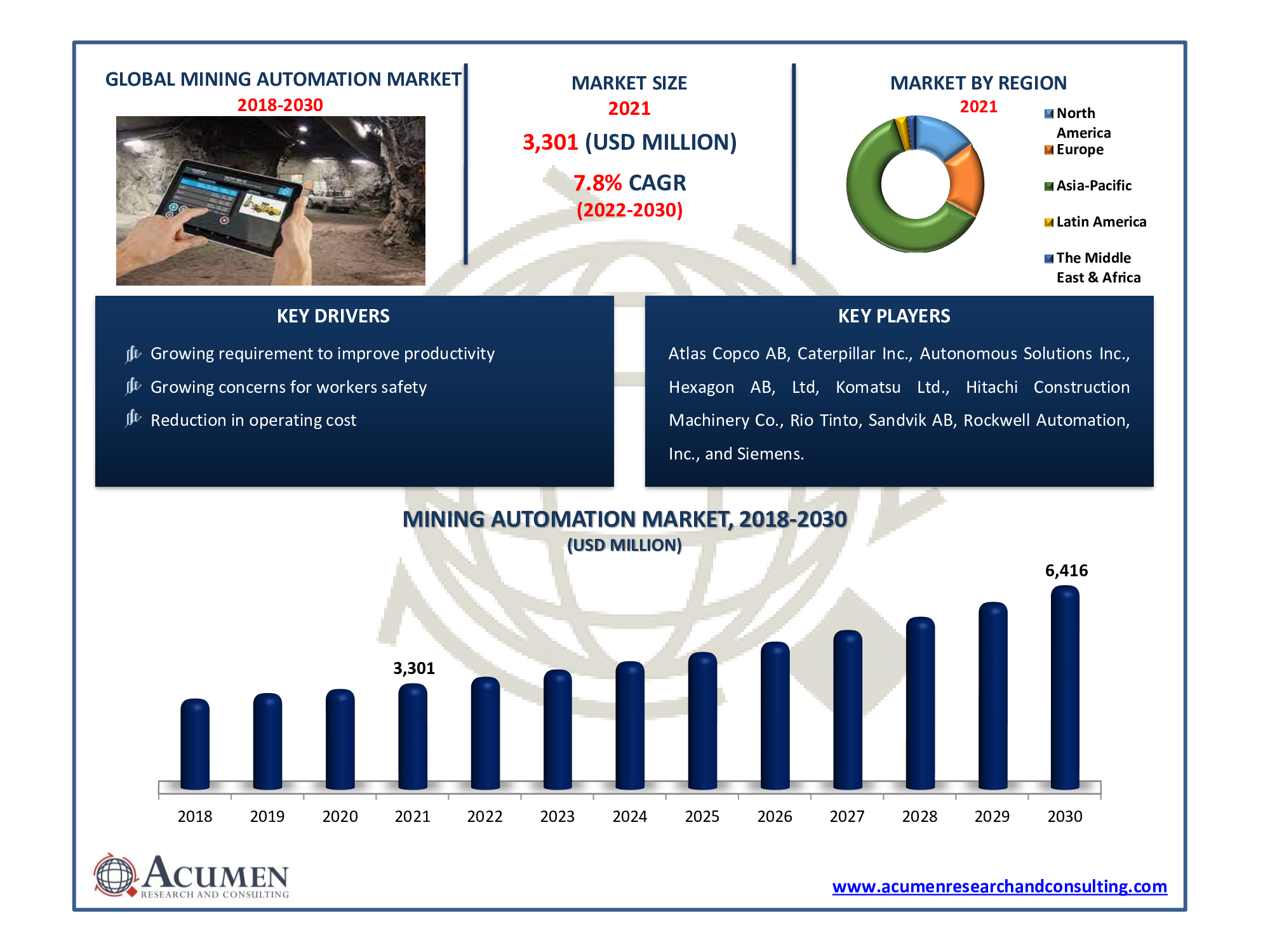 Increasing productivity in the mining process through automation is the leading factor driving the growth of the global mining automation market. The mining industry is currently facing a unique set of difficulties, including increasing output and lowering costs while maintaining workers' health and safety, safeguarding fixed assets, and conserving the environment. With the goal of increasing productivity and addressing the mining industry's issues, automation and digitalization are widely regarded as the most influential trends in the mining automation market worldwide.

The increasing number of mining accidents has long been a source of concern for mining management and the government. Miners frequently endanger their lives by traveling deep underground in dangerous conditions in order to bring lucrative commodities to the surface. By automating underground chores and deploying robots or other advanced technology that can function efficiently without being inhibited by any kind of cause, workers and their managers will undoubtedly benefit. This element will contribute considerably to a greater mining automation market share in the next years.

The use of sophisticated mining equipment in mining activities is expected to save time and money, which is boosting market demand. This is hastening the mining industry's move to automation. However, operating complex mining equipment requires highly competent and qualified professionals, which they lack. Furthermore, natural resource depletion will eventually reduce mining activity, perhaps resulting in a major revenue decline. These factors have been limiting the mining automation market's revenue for several years. Furthermore, rising digitization in the automation process is anticipated to create numerous growth opportunities in the market throughout the forecast timeframe. By automating machinery operation, advances in artificial intelligence (AI), machine learning, and the industrial internet of things (IoT) have the potential to save the sector billions of dollars and hundreds of lives in the coming few years.

The global mining automation market is segmented based on technique, type, workflow, and geography. 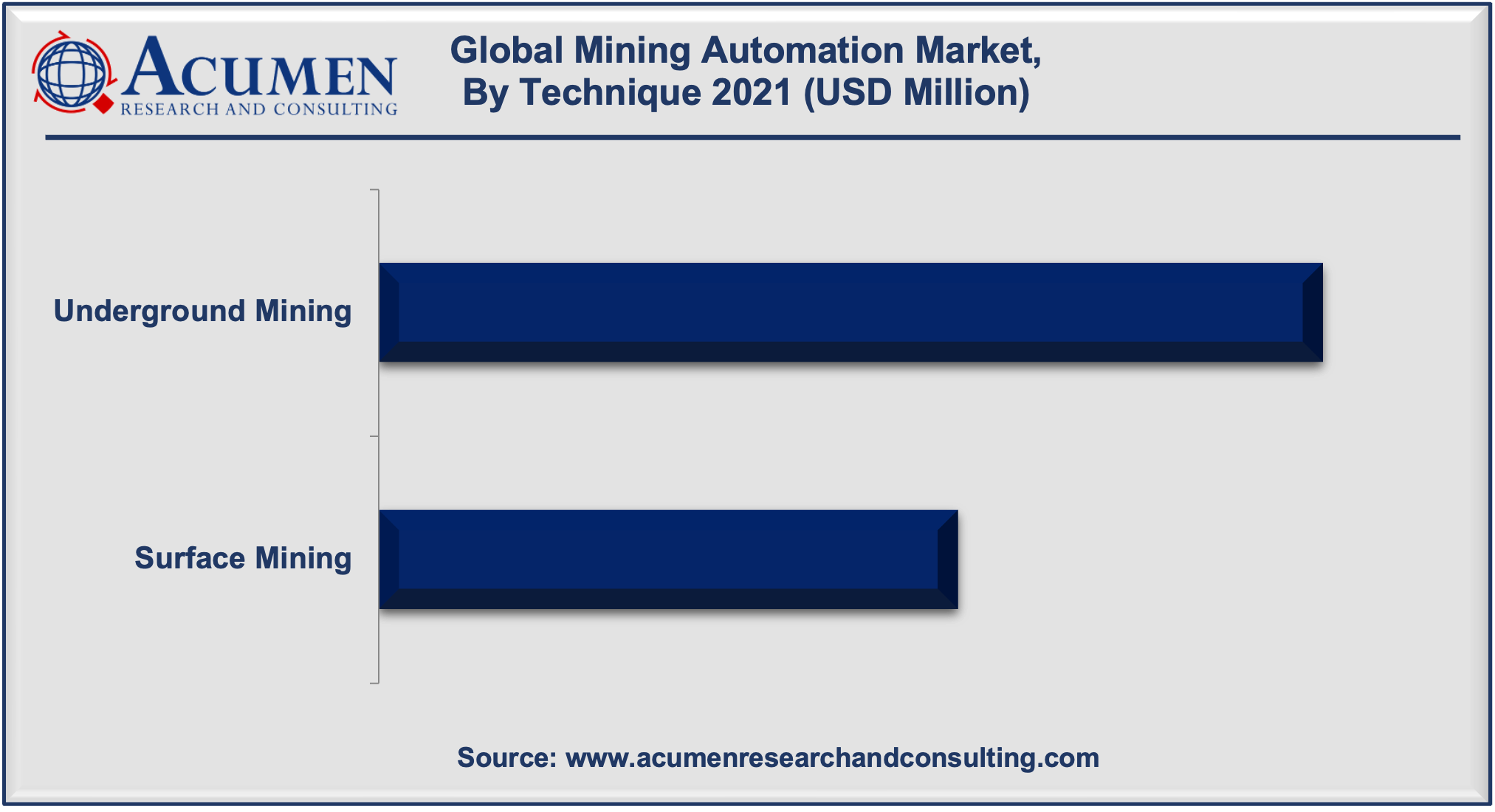 The mining equipment segment is expected to generate significant mining automation market revenue in 2021. Automated mining equipment is recognized to reduce the use of human labor in mining techniques. Furthermore, mining businesses around the world are quickly embracing technology advancements to better utilize their equipment and human resources in order to increase safety. For example, Bis, a logistics firm, and Israel Aerospace Industries (IAI) announced a collaboration in September 2020 for 'Auto-mate,' a new joint venture to deliver autonomous technologies for mining operations.

The mining process segment is anticipated to lead the market during the forecasted years. The mining process is sub-segmented into autonomous haulage and autonomous drilling. The autonomous haulage segment obtained a significant market share among them, as carrying ore from the mining pit to the dumping site is among the most critical and capital-intensive tasks in mining operations. The increasing use of digitized and integrated technology such as GPS, wireless connections, complex software, and electronic controls has resulted in extremely competent autonomous hauling.

Based on the regional segmentation, the Asia-Pacific region accounted for the maximum share in 2021. The leading share of North America is attributed to the significant economic development in China and India. In addition, the need for high productivity and efficiency in mines is leading to more adoption. In addition, the government and private enterprises are investing significant funds in improving mining activities, paving the road for Asia-Pacific mining automation to progress. Europe is the next most important main player, with the biggest market share. Exploration activity in this region is always increasing. It is resulting in the widespread use of automation devices.

How big was the global mining automation market in 2021?

The estimated value of global mining automation market in 2021 was accounted to be USD 3,301 Mn.

What will be the projected CAGR for global mining automation market during forecast period of 2022 to 2030?

The projected CAGR of mining automation market during the analysis period of 2022 to 2030 is 7.8%.

Which region held the dominating position in the global mining automation market?

Asia-Pacific held the dominating share for mining automation during the analysis period of 2022 to 2030.

The Middle East & Africa region exhibited fastest growing CAGR for mining automation during the analysis period of 2022 to 2030.

What are the current trends and dynamics in the global mining automation market?

By segment technique, which sub-segment held the maximum share?

Based on technique, underground mining segment held the maximum share for Mining Automation market in 2021.