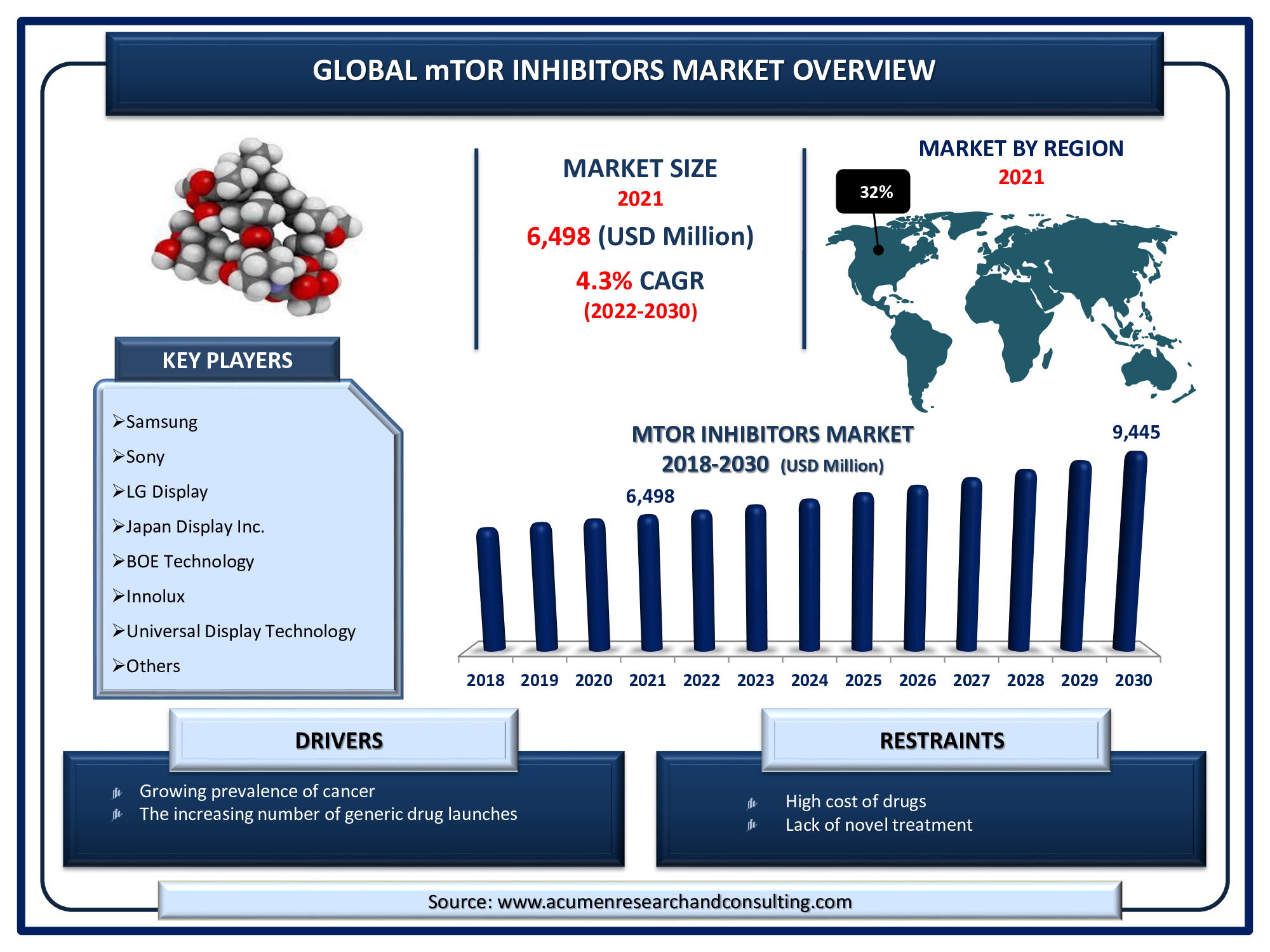 The mechanistic target of rapamycin (mTOR) is a conserved serine and threonine protein kinase. It is identified as the target of the immunosuppressive drug rapamycin. Since the discovery of mTOR, a great deal has been learned about the function of this kinase. It is now well established that mTOR plays a critical role in regulating cell growth and proliferation, making mTOR a therapeutic target for diseases caused by uncontrolled cell proliferation, such as cancer. Several mTOR inhibitors have been developed over the last decade, and many are currently in clinical trials for cancer treatment. mTOR controls cellular metabolism, growth, and expansion by forming and signaling via two protein complexes - mTORC1 and mTORC2. Rapalogs (rapamycin and its analogs) are the most well-established mTOR inhibitors, having shown tumor responses in clinical trials against a variety of tumor types. A surge in the number of generic drug launches is a leading mTOR inhibitors market trend that is pushing the demand forward.

The increasing prevalence of cancer disease is the primary factor expanding the global mTOR inhibitors market revenue. According to the American Cancer Society data, there were more than 1.9 million new cancer cases and 608,570 cancer deaths in the U.S. Similarly, it is estimated the number of cases in 2022 will be approximately the same and the number of deaths would rise to 609,360 in the U.S. Furthermore, according to estimates from the World Health Organization (WHO), cancer is the first or second leading cause of death before the age of 70 years in most part of the world. Many human tumors develop as a result of mTOR signalling dysregulation, which can make them more susceptible to mTOR inhibitors. Multiple elements of the mTOR pathway, such as PI3K amplification/mutation, AKT overexpression, eIF4E, and 4EBP1 and overexpression, have been linked to a variety of cancers. As a result, mTOR is an intriguing therapeutic target for treating multiple cancers, either alone or in conjunction with inhibitors of other pathways.

The increasing number of generic drug launches and rapid growth of product approvals from regulatory bodies are other significant factors that are driving the market demand during the forecasted years 2022 to 2030. In addition to that, the rising number of organ transplant surgeries is anticipated to surge the demand in the coming years. For example, in 2020, 39,034 transplants were executed from both living and dead donors which was a slight decrease in 2019 with 39,719 transplants. However, since June of 2020, living donor transplants have taken place at rates more comparable to pre-pandemic activity. Meanwhile, the high cost of drugs and interventional devices and the lack of novel treatment are some of the aspects that are limiting the market to grow.

Furthermore, the rising government spending on research & development activities and increasing technological advancements in renal pathological and physiological mechanisms would likely create numerous growth opportunities for the market during the forecasted period.

The global mTOR inhibitors market is segmented based on product type, indication, route of administration, end-users, distribution channel, and geography.

Among them, the rapamune segment is expected to grow with a substantial share in the coming years. Rapamune is a prescription medication used to treat the symptoms of renal transplant rejection prophylaxis and lymphangioleiomyomatosis. Rapamune can be used alone or in combination with other medications. Rapamune belongs to the immunosuppressant class of drugs.It is an immunosuppressive mTOR inhibitor indicated for the prevention of organ rejection in patients aged more than 13 years receiving renal transplants. 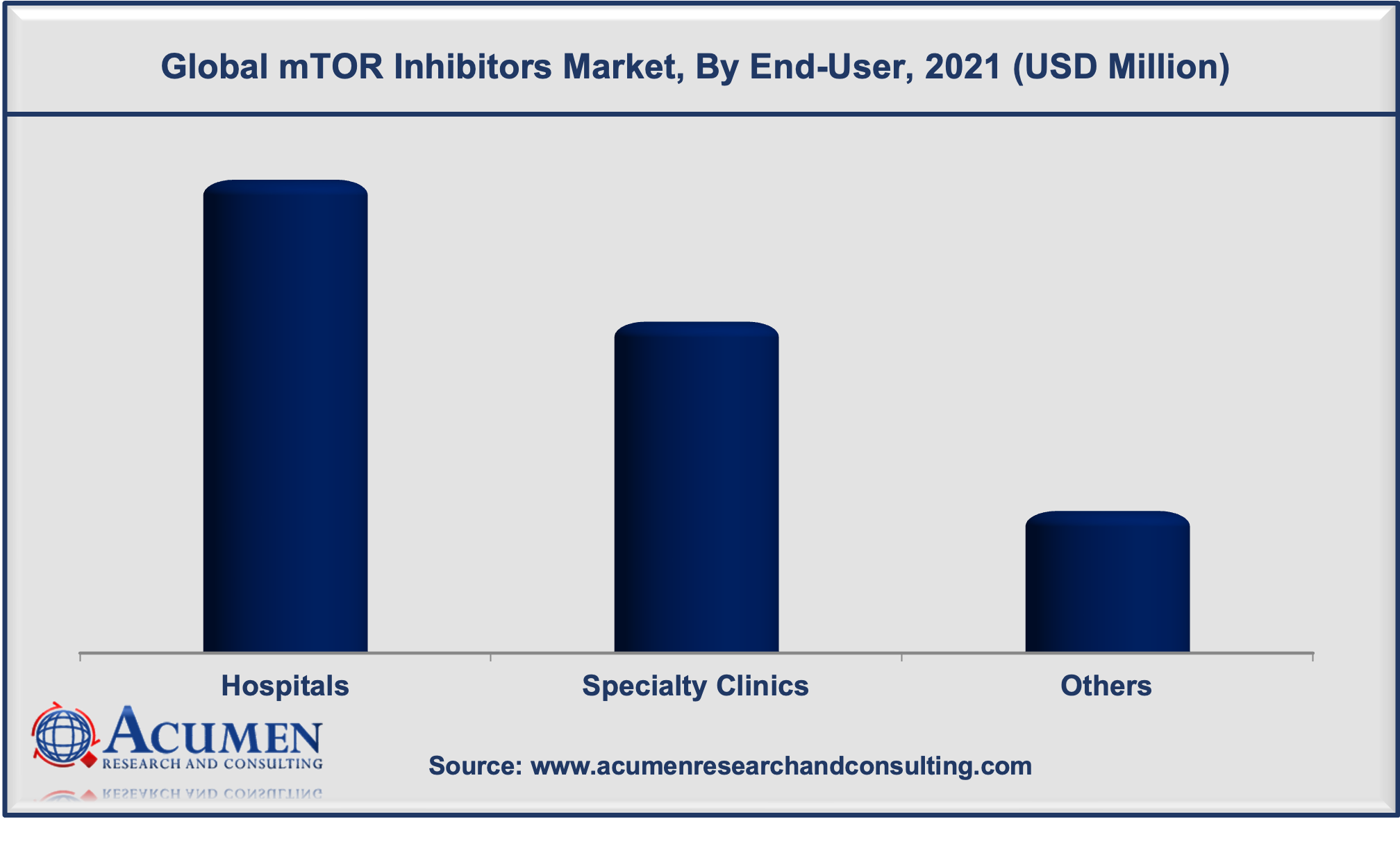 Based on our analysis, the hospital segment is likely to attain a noteworthy market share in 2021. Numerous advantages of hospitals such as the presence of experienced medical professionals, the presence of emergency units, availability of advanced medical devices, and better diagnosis and treatment are supporting the market growth. Additionally, the surging cases of cancer, and the growing number of organ transplants that are mostly operated on are boosting the hospital segment revenue.

Out of these, the hospital pharmacies gathered the utmost shares from the mTOR inhibitors market. Increased interaction with prescribers and other health professionals, greater input in prescribing decisions about drugs and administration, and better access to medical records of patients are some of the leading aspects that are supporting the hospital pharmacies segment. Meanwhile, the online pharmacy segment is projected to witness the fastest growth rate during the forecast period.

The regional segmentation is given as North America, Latin America, Asia-Pacific, Europe, and the MEA. Among all the regions, North America region commanded the majority of the market share all through the forecasted years. Some of the factors such as rapid growth in healthcare expenditure, presence of key players and advanced healthcare facilities, and increasing number of elderly populations will spur the North America mTOR inhibitors market growth. On the other hand, the Asia-Pacific region is likely to attain the fastest CAGR from 2022 to 2030. This could be attributed to the surging number of cancer patients, rising government initiatives toward drug development, and growing awareness for novel treatments.

How big was the market size of global mTOR Inhibitors market in 2021?

What will be the projected CAGR for global mTOR Inhibitors market during forecast period of 2022 to 2030?

Which region held the dominating position in the global mTOR Inhibitors market?

North America held the dominating share for mTOR Inhibitors during the analysis period of 2022 to 2030.

Asia-Pacific region exhibited fastest growing CAGR for mTOR Inhibitors during the analysis period of 2022 to 2030.

What are the current trends and dynamics in the global mTOR Inhibitors market?

Growing prevalence of cancer, the increasing number of generic drug launches, and rapid growth in product approvals from regulatory bodies all contribute to the expansion of the worldwide mTOR Inhibitors market.

By segment product type, which sub-segment held the maximum share?

Based on product type, rapamune segment held the maximum share for mTOR Inhibitors market in 2021.