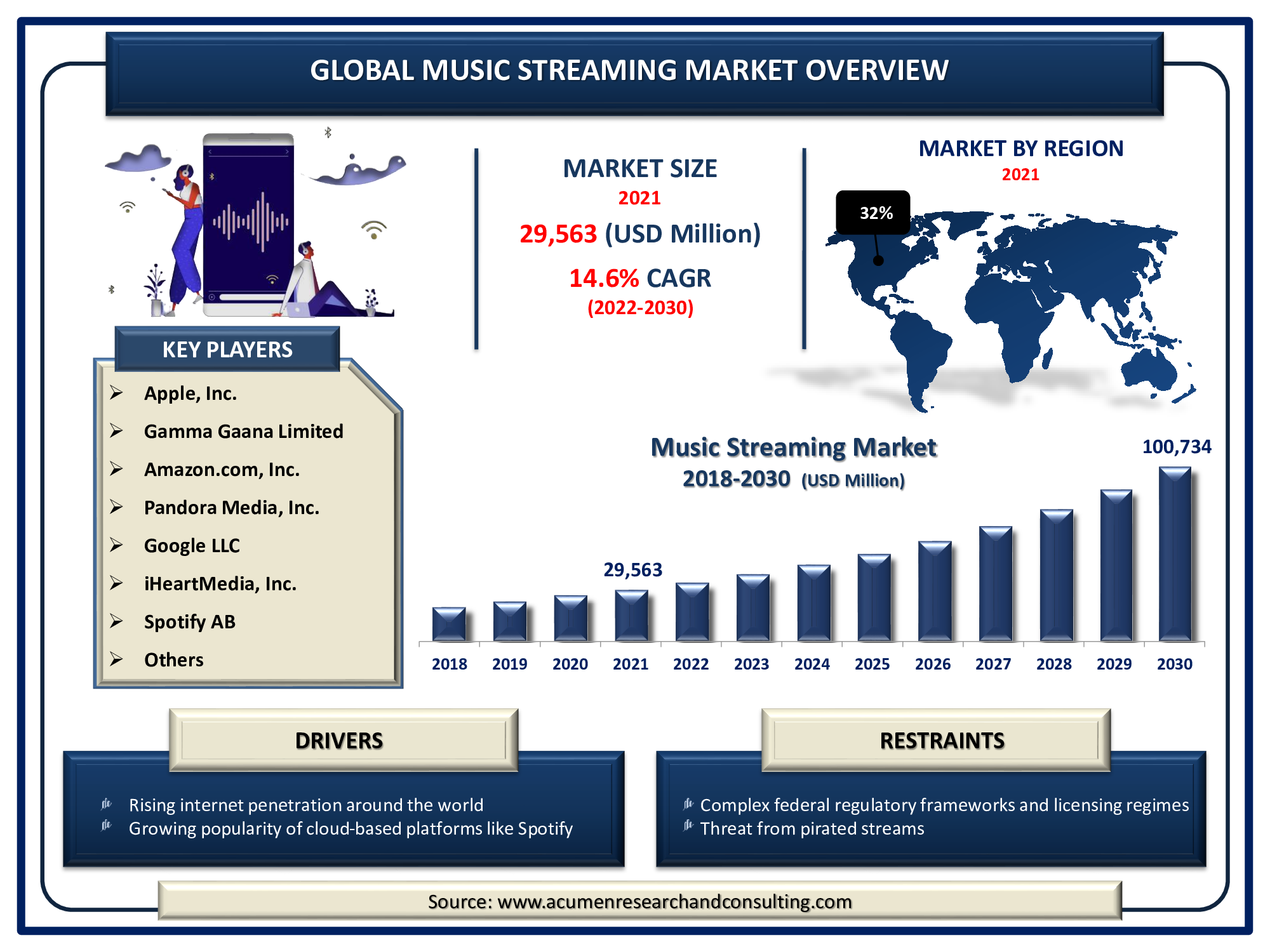 Music streaming is a path of instantly sending audio content to the smart devices without the need for users to download files from the server. Music streaming technologies such as Pandora, Spotify, and Amazon Music employ this technology to distribute songs that may be listened to on a variety of platforms. Music streaming is platforms that enable registered users to stream music and podcasting as well as see video content. These systems are attaining popularity as a result of services including audio track recommendations, smart playlist customization, and seamless connectivity between applications as well as browsers. To improve the consumer experience, music streaming solutions are focused on offering song lyrics, podcasts, and live performances on their platforms.

Music streaming has risen dramatically in recent years, mainly to an increase in the adoption of smart devices such as mobile phones and the prevalence of streaming solutions such as Apple Music, Spotify, and Deezer. Moreover, the continued expansion in the number of internet users is positively benefiting the music streaming market trend. Additionally, music streaming platforms provide users with access to audio songs, online music videos, podcasts, and live performances by performers. Music streaming also provides features such as personalized playlists, song recommendations, and rapid access to tracks on both the applications and browser platforms. As a result, the current rise in podcasting and audiobook acceptance has sparked consumers' curiosity and is expected to propel the global music streaming market size during the projection period.

The COVID-19 epidemic is also functioning as a major driving force in the global music streaming industry. This is due to the government imposing a strict shutdown to prevent the diseases from spreading. As a result, people were compelled to stay at home, which encouraged the acceptance and adoption of internet music services around the world. Certain behavioral variations occurred among consumers during the early period of the epidemic. During the shutdown, music streaming was done mostly through household appliances such as televisions rather than cellphones, according to Tencent Music Entertainment. In addition, the subscriber base who participates in live feeds on social media sites such as Instagram and Facebook has grown.

The global music streaming market segmentation is based on the service, content type, platform, end-use, and geographical region. 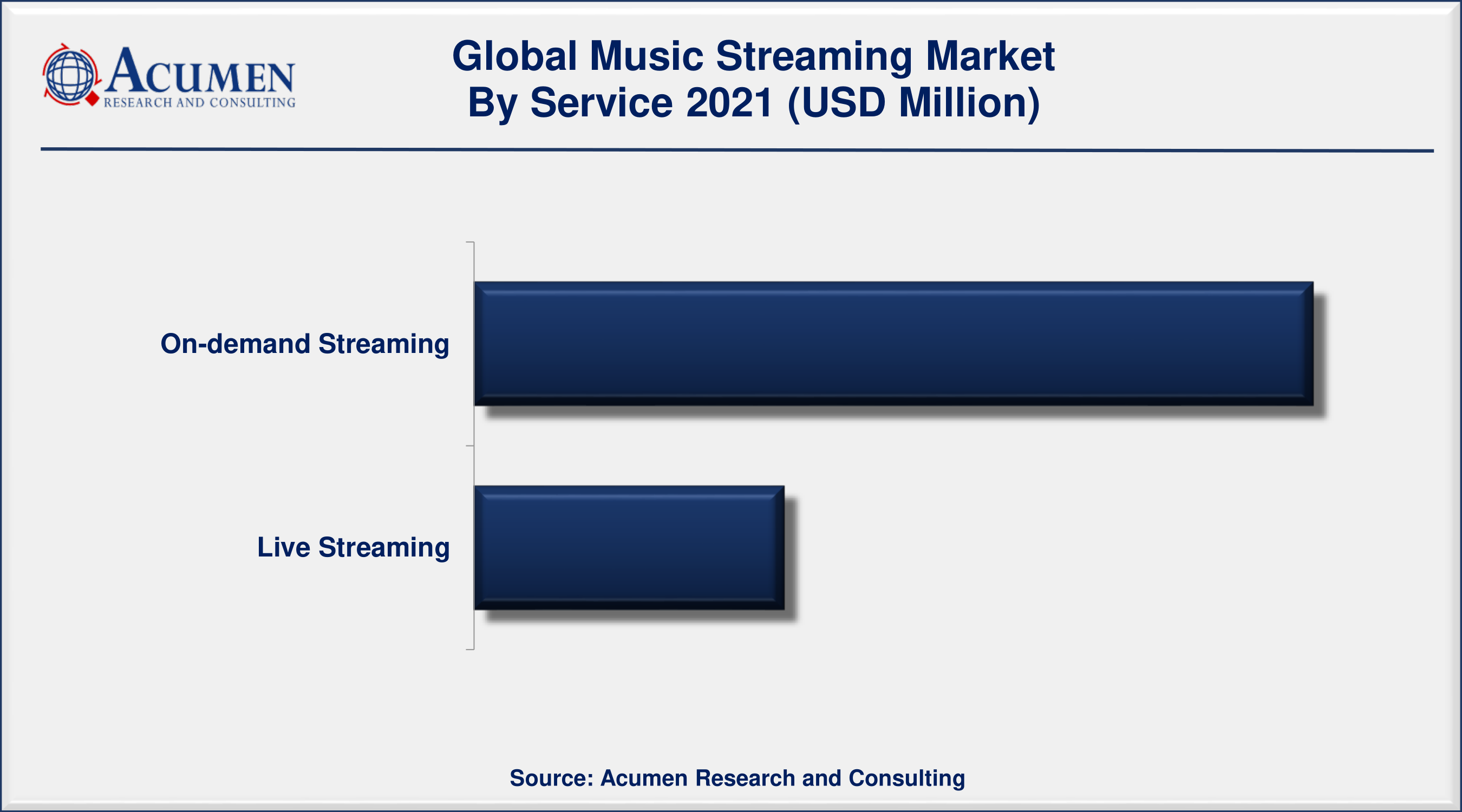 Based on the service, the on-demand streaming sector will control the majority of market shares in 2021. Such growth can be attributed to the ease of availability of music streaming dependent on the customer's emotions and preferences. On-demand music streaming solutions have drastically reduced illegitimate music broadcasting or downloading for all interested parties, from broadcasters to musicians. In addition, services contribute to user convenience by providing exploratory features and recommendations as per on their interests. Besides that, live internet-based streaming has also become more prevalent as the availability and services of well-known music streaming have increased.

According to the music streaming market forecast, the audio segment is predicted to grow significantly in the market over the next few years. This is due to the fact that audio content is prominent when customers listen to the music while conducting their everyday activities such as jogging, traveling, or working. Furthermore, consumers' hectic and stressful lifestyles make audio content more accessible than video content. Also, the expanding influence of over-the-top (OTT) platforms, as well as short video smartphone applications, is moving the video segment forward. 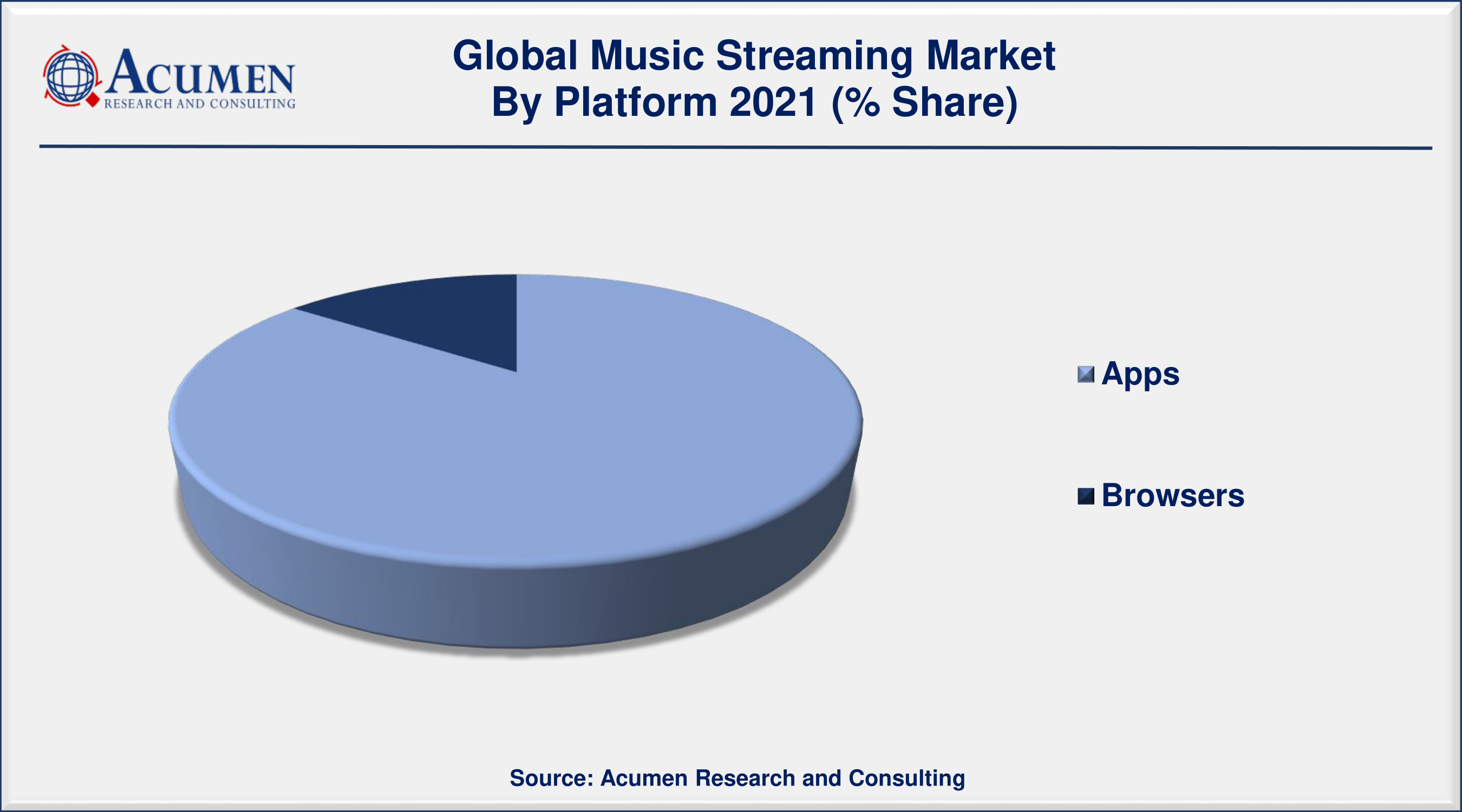 According to music streaming industry analysis, the individual segment will drive the market in 2021. The emerging ways of life of younger generations, which involve listening to energetic audio tracks while going about their day-to-day activities, are driving the segment growth. Many technological providers allow their employees to work quietly while listening to music through headphones. Additionally, as wireless technologies become more widely available and smart gadgets grow to be more prevalent, the demand for online music is fast surpassing downloads.

The North American music streaming industry is forecast to lead the global music streaming market due to the region's substantial acceptance of sophisticated music, the availability of resources for offering improved music streaming technologies to end-users, and end-users increasing disposable income. Over the last four years, the region has seen the arrival of current data technologies such as continuous 4G as well as high-speed internet providers. These elements are driving the North American music streaming market forward. Furthermore, the presence of significant industry giants such as Amazon, Pandora, Apple, and Google is one of the primary causes fueling that region's industry.

How much was the global music streaming market size in 2021?

The global music streaming market size in 2021 was accounted to be USD 29,563 Million.

What will be the projected CAGR for global music streaming market during forecast period of 2022 to 2030?

Which region held the dominating position in the global music streaming market?

North America held the dominating share for music streaming during the analysis period of 2022 to 2030.

Asia-Pacific region exhibited fastest growing CAGR for music streaming during the analysis period of 2022 to 2030.

What are the current trends and dynamics in the global music streaming market?

Increasing popularity of smart gadgets such as smartphones as well as internet penetration around the world are the prominent factors that fuel the growth of global music streaming market.

By segment platform, which sub-segment held the maximum share?

Based on platform, apps segment hold the maximum share for music streaming market in 2021.