The Global Neoprene Market Size accounted for USD 2,231 Million in 2021 and is estimated to achieve a market size of USD 2,802 Million by 2030 growing at a CAGR of 2.6% from 2022 to 2030. One of the primary factors driving market expansion is the rising demand for neoprene across various industrial verticals like automotive, construction, electrical, and others. Furthermore, neoprene's distinguishing qualities, including ozone & weather resistances, as well as better tensile strength, have become significant factors driving the worldwide neoprene market expansion. 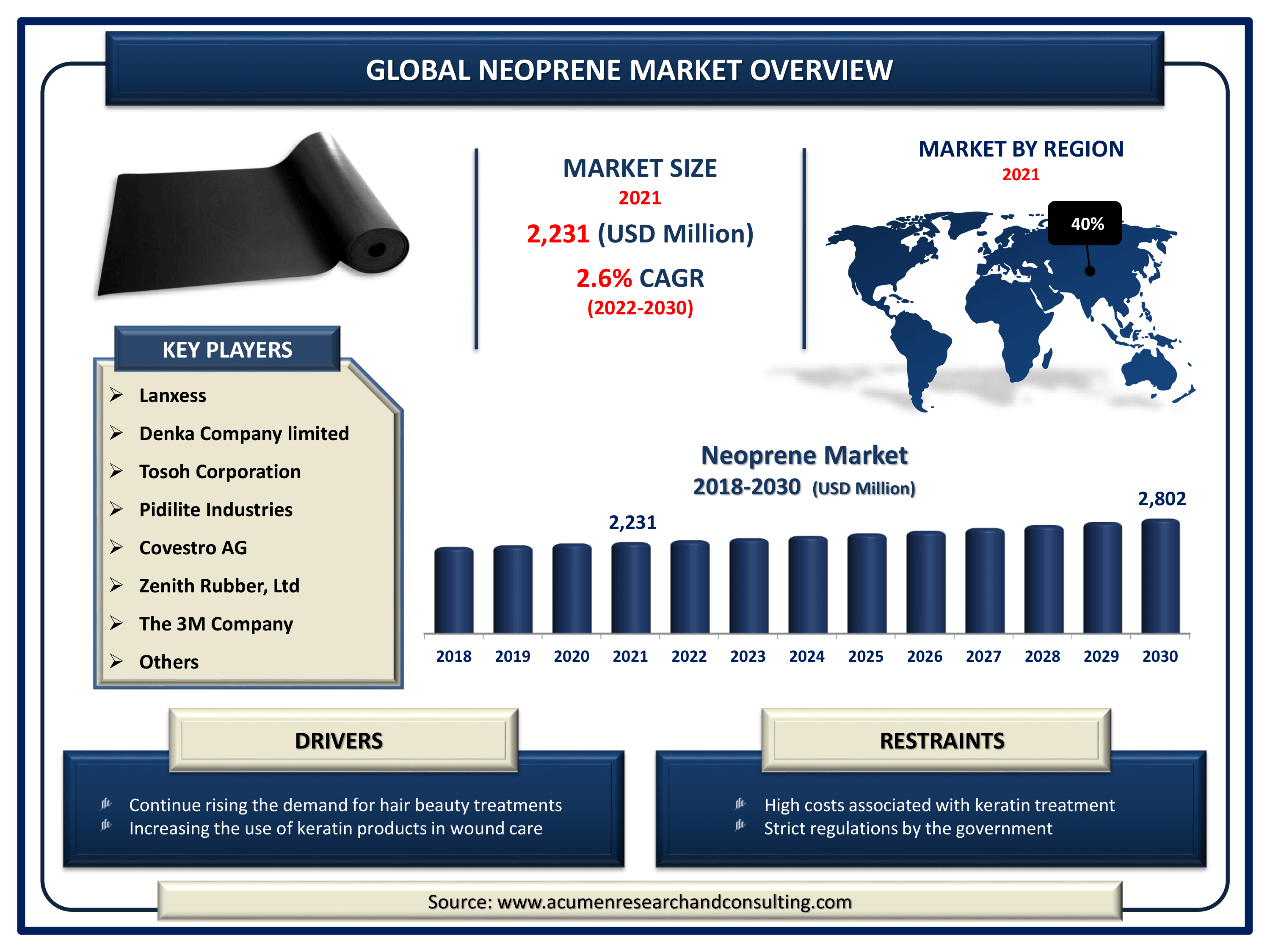 Neoprene is a artificial polymer that is synthesized artificially using free radical crystallization of chloroprene. It was invented in the 1930s as an oil-resistant alternative to natural rubber latex, and DuPont was the first company to market it in 1931. Neoprene has several benefits over latex from natural rubber and other synthetic materials. Neoprene has excellent resistance to oxidizing agents including oils, alcohols, and acids, as well as to any acetonic solvents. It also has strong resilience to physical breakdowns such as cuts and is resistant to flexing, abrasion, and twisting damage. It also does not disintegrate the exposure to sunlight, ozone, and weather, and it adheres well to fabrics or metals. Furthermore, Neoprene has exceptional physical and chemical properties as well as sustains elasticity over a diverse range of temperatures.

The growing usage of neoprene in the architecture and building sectors due to its high tensile toughness, in the semiconductor industry for wire jackets, and in the garment and footwear industries is likely to fuel market revenue growth during the forecast period. Furthermore, rapid advances in polymer research, the use of neoprene in application fields such as corrosion-resistant coating materials and landfill linings, and the increasing use of neoprene for a protective coating for personal computers are some variables expected to drive market growth for neoprene and contribute significantly to market revenue growth in the future. Neoprene seems to be a solvent-resistant elastomeric that is being used to manufacture many automotive raw materials such as tires, hoses, as well as belts, and this is another reason that is projected to fuel market revenue growth in the future.

Due to rapid industrialization, the uses of Neoprene have increased dramatically in recent years, as the qualities of Neoprene are predicted to hold a unique position in industrial sector applications. Neoprene is a rubberized material with several applications, including fire-proof insulation, electrical wings, and civil engineering. Furthermore, the surge in urbanization is fueling an increase in urban infrastructure development such as smart urban. Rising demand for neoprene across various end-user sectors is expected to generate incremental income throughout the opportunity evaluation period. On the other hand, volatility in crude oil and petroleum derivative prices are projected to be important factors impeding the growth of the worldwide neoprene market in the coming years.

The worldwide neoprene market segmentation is based on the product, end-user, and geography. 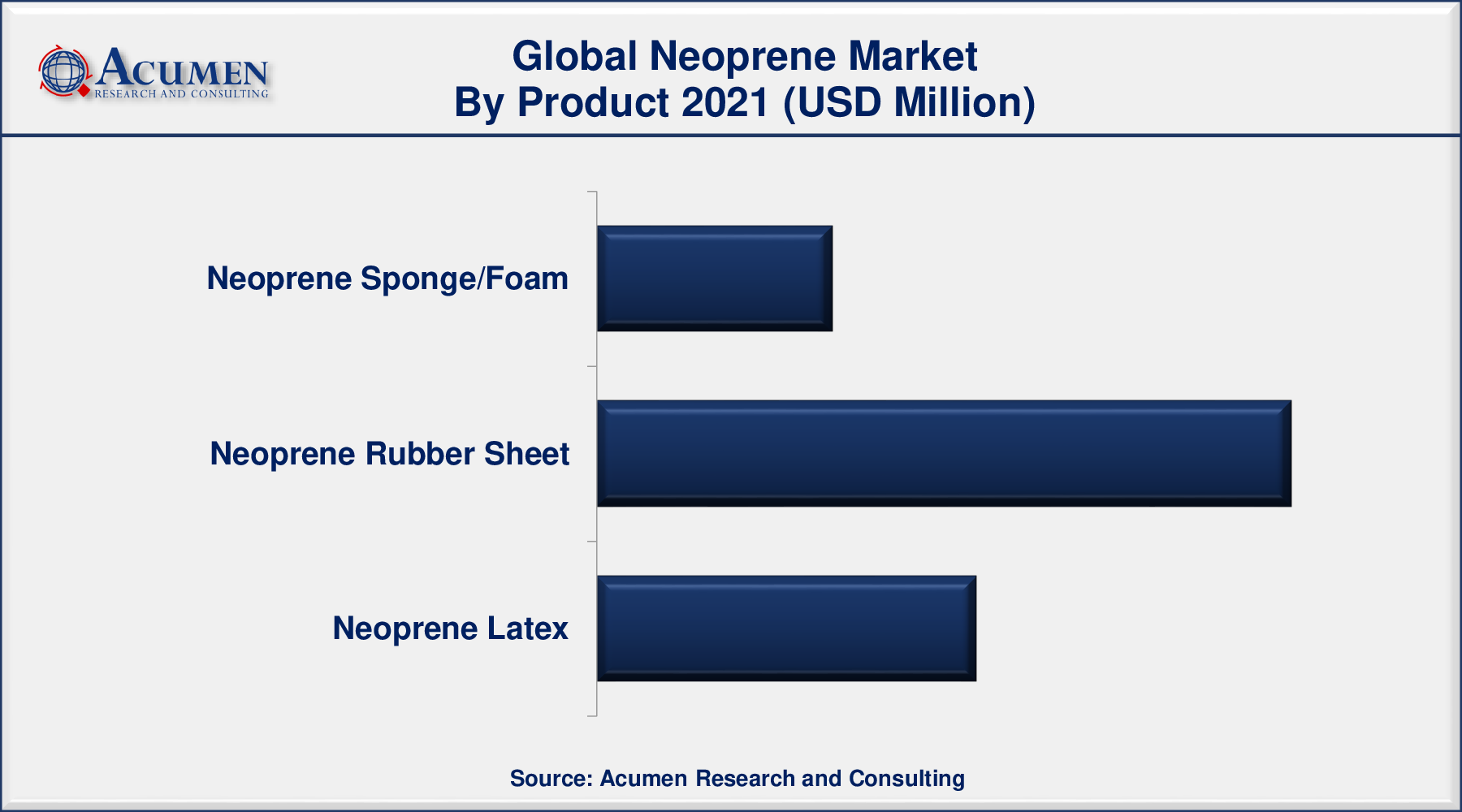 According to the neoprene industry analysis, the neoprene sheet segment is predicted to account for a significant revenue share of the worldwide market over the forecast period. Neoprene rubber sheets are incredibly adaptable and resistant to petroleum, lubricants, and variations in weather conditions. Due to their stability and resistance to the harmful effects of UV radiation and ozone, neoprene sheets are favored over cheap rubber sheets. In the automotive sector, neoprene sheets are commonly utilized for under-the-hood as well as underbody parts purposes. 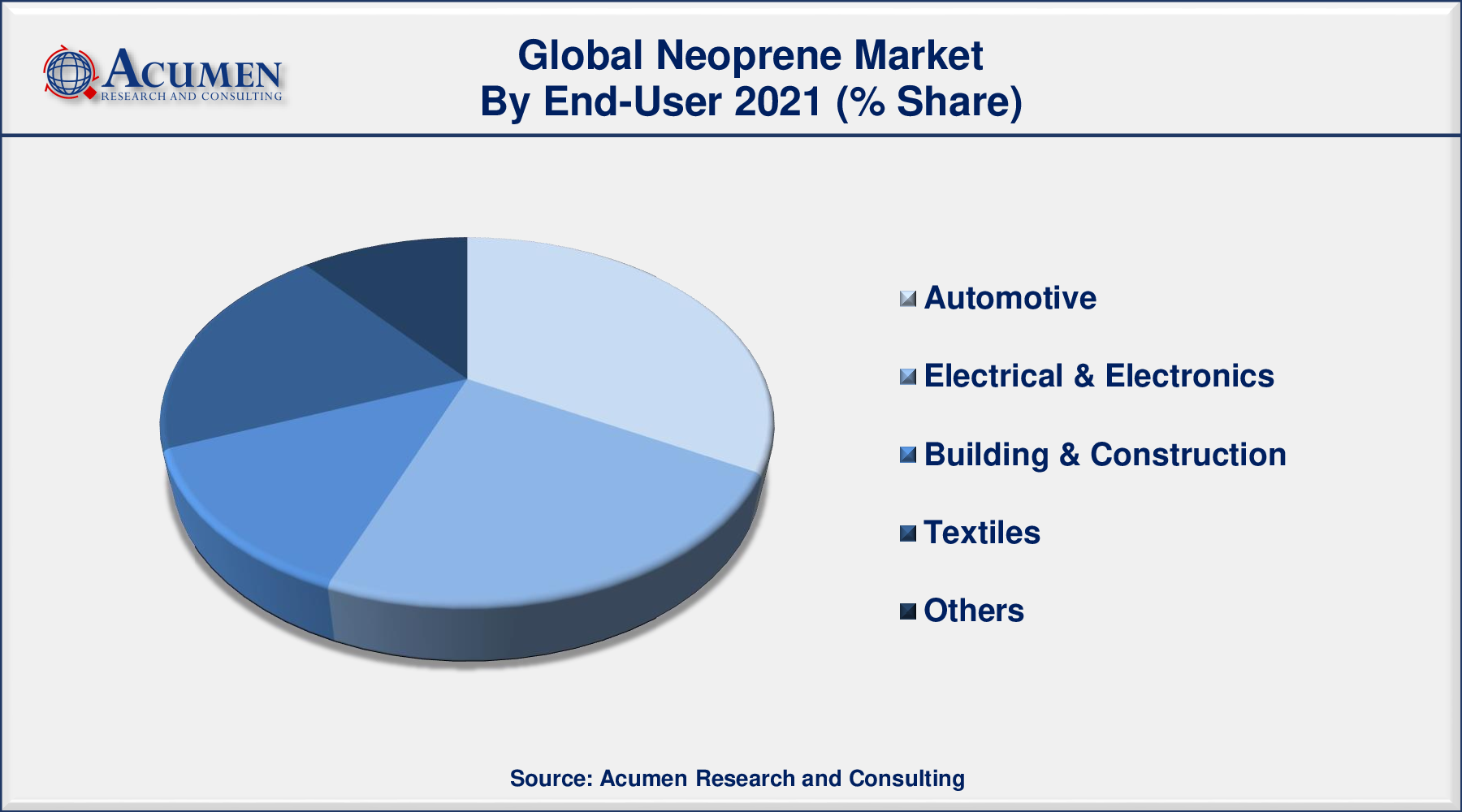 According to the neoprene market forecast, the automotive segment would experience a considerable revenue increase during the projected timeframe. This is owing to the increased use of neoprene rubber in the manufacture of auto parts and components due to its properties such as great durability against abrasion, physical damage, grease, and weather changes. Neoprene rubber is frequently utilized in automobile components such as hose covers, fan belts, steering system components, as well as shock absorber gaskets, among others. Car seat covers are also made from neoprene textiles. Neoprene cloth interiors offer outstanding protection against filth, scratches, or moisture, and their water resistance makes them an excellent choice as a covering to safeguard original automotive parts from spills and other contaminants.

Asia-Pacific Region Is Expected To Dominate The Market

Due to the high concentration of neoprene end-users in the Asia-Pacific region, the region is currently holding a significant market share in the worldwide Neoprene industry. The dense presence of industries such as automobile and engineering in Asia-Pacific growing countries such as China, India, the Philippines, Malaysia, and Indonesia is likely to grow at a high rate throughout the forecast period. The government agencies of advanced economies are growingly making investments in infrastructure and rapid industrialization, which is eventually increasing demand for components used, and neoprene is one of these materials, so the neoprene market in emerging economies is predicted to expand at a significant rate throughout the forecast period.

What is the size of global neoprene market in 2021?

The estimated value of global neoprene market in 2021 was accounted to be USD 2,231 Million.

What is the CAGR of global neoprene market during forecast period of 2022 to 2030?

Which region held the dominating position in the global neoprene market?

Which region held the dominating position in the global neoprene market?

North America region exhibited fastest growing CAGR for neoprene during the analysis period of 2022 to 2030.

What are the current trends and dynamics in the global Neoprene market?

Increasing adoption of neoprene rubber in the automotive Sector, as well as expanding construction and electronic industries in emerging economies, drives the growth of global neoprene market.

Based on product, neoprene rubber sheet segment is expected to hold the maximum share neoprene market.