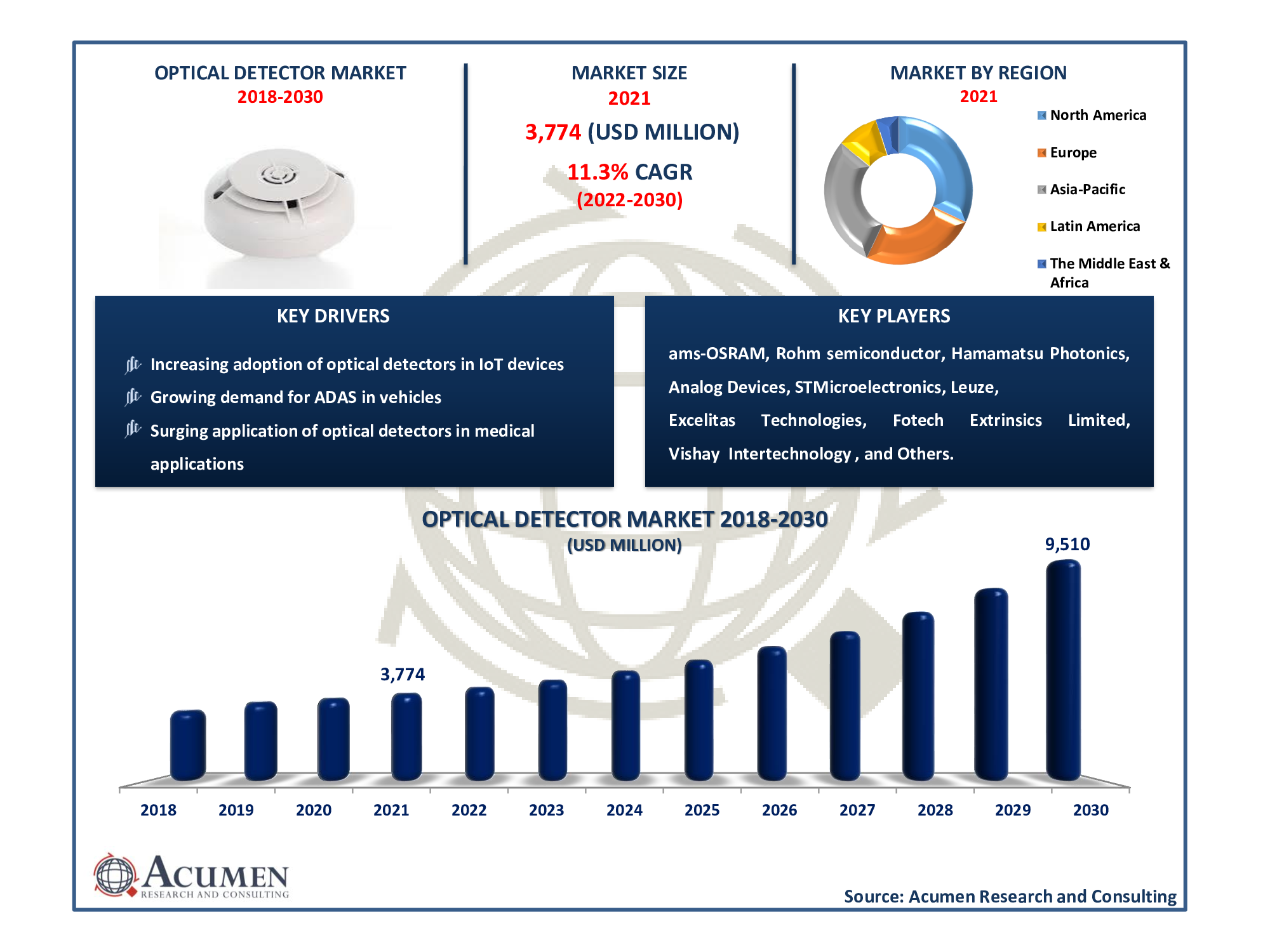 Optical detectors (also known as photodetectors) are electronic devices that capture optical energy and convert it into electrical energy that instruments can interpret and analyze. Our worldwide optical detector market forecast says that the growing application of these devices in numerous end-user industries is flourishing the industry demand. The growing adoption of smartphones and the rising popularity of smart electronic home appliances are some of the global optical detector market trends that are bolstering the market growth.

The increasing application of these devices on the Internet of Technology (IoT) is one of the primary factors driving the optical detector market revenue. Two components are critical in the IoT system: communication networks and connected devices. Sensors and actuators are the most common examples of these devices. Another important factor driving the optical detector market value is the increasing demand of these devices in the automotive industry. Technological advancements in the automotive industry such as the advent of advanced driver assistance systems (ADAS) have helped the optical detectors market share to grow significantly. Optical detectors have numerous applications and use cases. Vehicles use optical sensors in the automotive industry to recognize signs, obstacles, and other things that drivers notice while driving or parking. In addition, these detectors are crucial in the development of driverless cars.

However, the increasing availability of optical detectors and sensors is one of the major restraints to the optical detector market growth. Furthermore, the high cost of manufacturing optical detectors may limit the market's growth. On the other hand, optical detectors have gained enormous traction in the electronics industry over the last few decades. They have evolved into ideal contact-less detectors and are increasingly being used in a wide range of industrial and consumer applications, including smartphones, automatic lamps, photoelectric sensors, and position sensors.

The global optical detector market is segmented based on type, sensor type, end-use, and region. 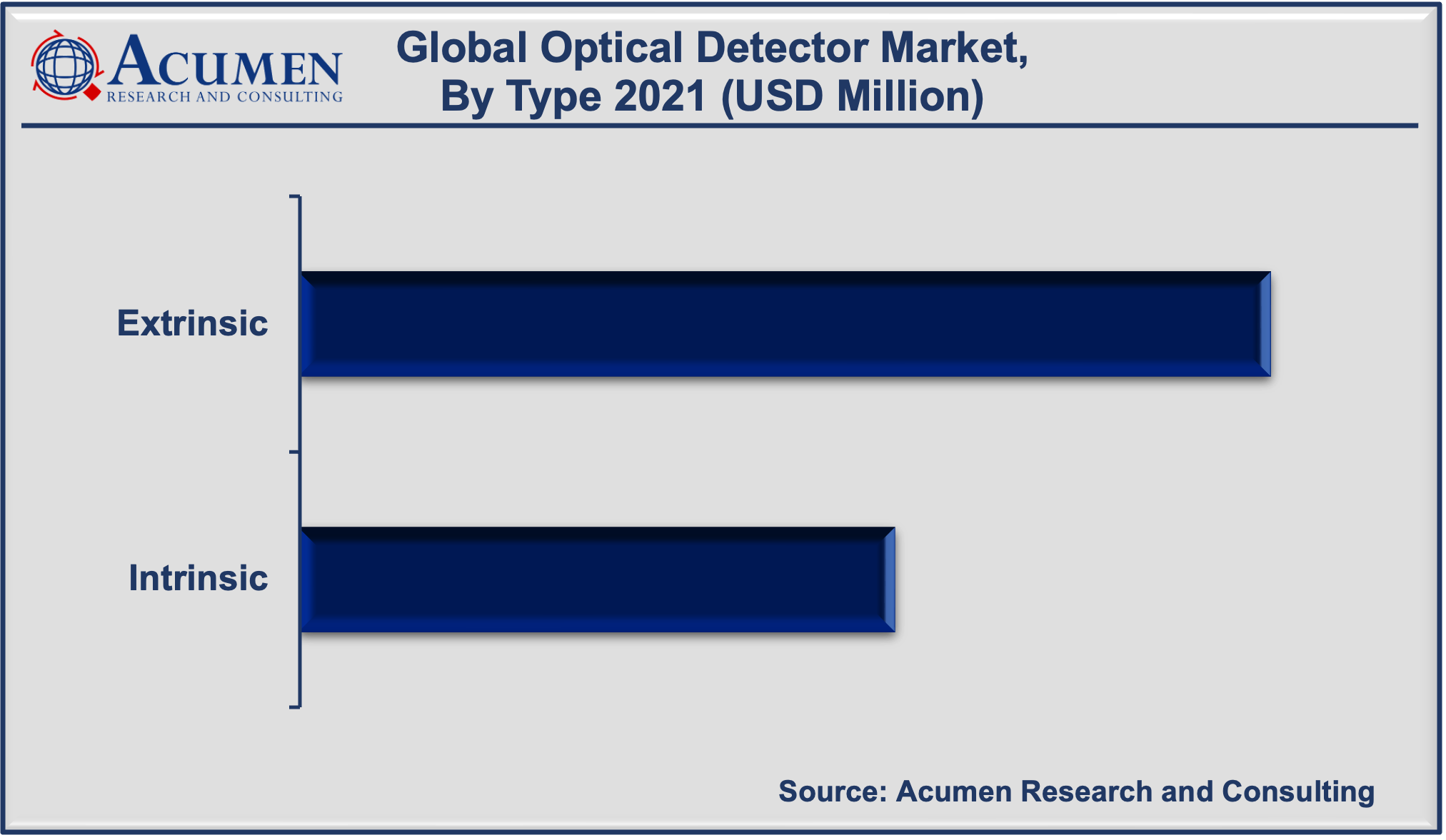 According to our optical detector industry analysis, the extrinsic segment held the largest market share in 2021 and is expected to continue to do so throughout the forecasted years 2022 to 2030. Extrinsic fiber optic sensors use a multimode optical fiber cable to transmit modulated light from a non-fiber optical sensor or an electronic sensor connected to an optical transmitter. Extrinsic sensors have the skill to reach places that would otherwise be inaccessible. One illustration is the measurement of temperature inside jet engines using a fiber to transmit radiation to a radiation pyrometer situated outside of the engine. Many extrinsic sensors can also be utilized to assess the inner temperature of electrical transformers, where the presence of tremendous electromagnetic fields makes other measurement system unfeasible. 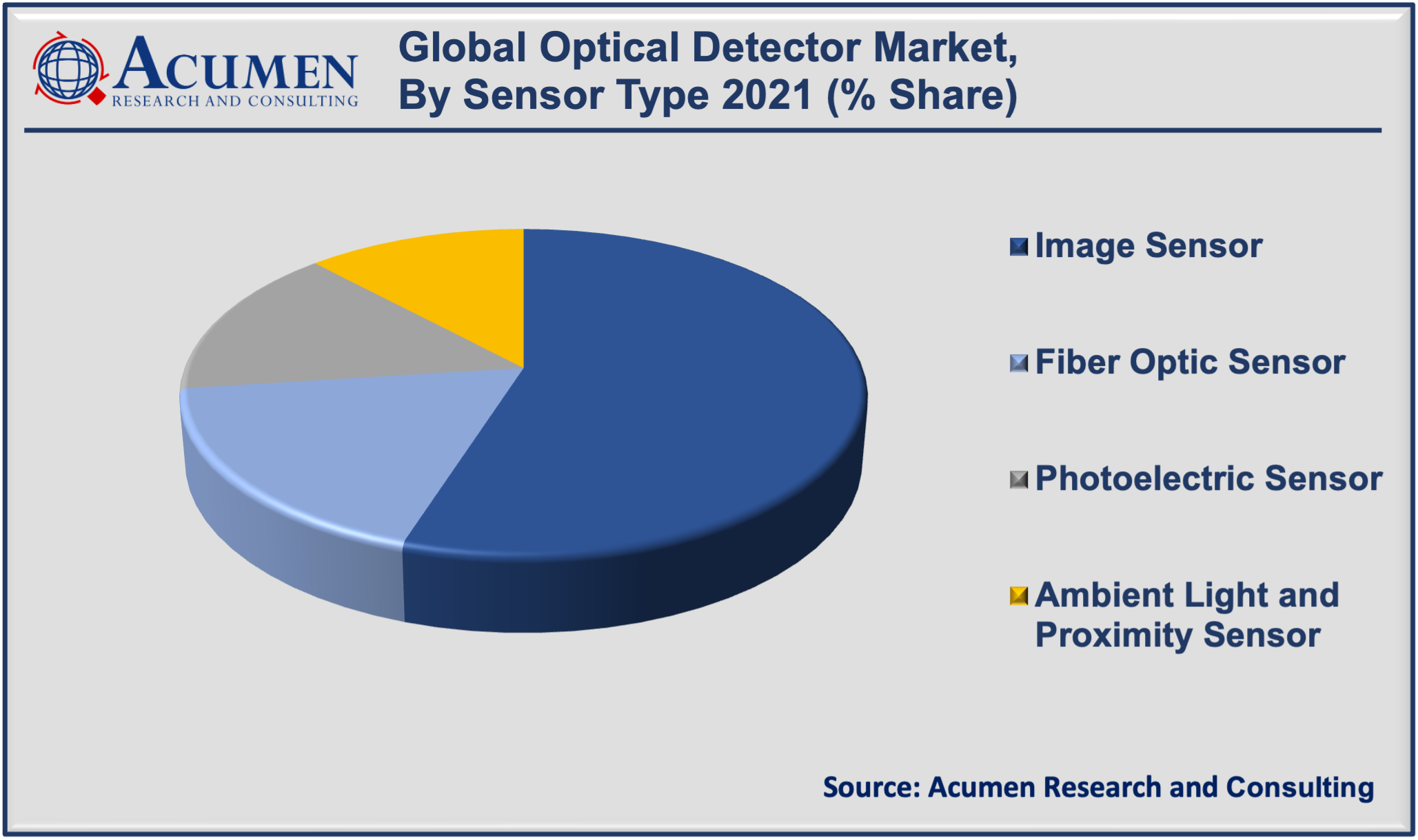 Among them, the image sensor segment accumulated a considerable optical detector market share in 2021. One of the primary factors driving image sensor growth is the growing amount of cameras used in devices like smartphones and tablets. As camera features and image quality become more important in smartphones, growing demand for cameras in artificial intelligence (AI), virtual reality (VR), augmented reality (AR), and autonomous vehicles are likely to generate significant growth opportunities for image sensor manufacturers. However, the fiber optic sensor segment is projected to witness the fastest growth rate in the coming years. Because of their small size and the fact that they do not involve electrical power for measurement, optical sensors are widely used in remote sensing.

Based on our analysis, the consumer electronics segment will have the largest market share in 2021. The growing adoption of consumer electronics devices, particularly smartphones and smart tablets, is driving up demand for optical sensors indirectly. The emergence of smartphones with features such as eye-tracking, restore recognition, 3D imaging, and so on facilitated the adoption of optical sensors. However, the automotive and medical applications are expected to grow at a substantial rate throughout the forecast timeframe from 2022 to 2030.

Our worldwide optical detector market regional outlook suggests that the North America region dominated the market with a leading share and is likely to continue its trend in the coming years. This could be attributed to the presence of numerous smart devices in US households. As per the Consumer Technology Association (CTA), the U.S. consumer eagerness for technological advanced products is expected to increase in the coming future, with 39% households simply stating they are more likely to acquire digital products on account of the pandemic in June 2021. However, the Asia-Pacific region is likely to register the fastest growth in the forecast period due to the growing manufacturing and adoption of these devices in countries like China, Japan, South Korea, etc.

How big was the market size of global optical detector market in 2021?

What will be the projected CAGR for global optical detector market during forecast period of 2022 to 2030?

Which region held the dominating position in the global optical detector market?

North America held the dominating optical detector during the analysis period of 2022 to 2030.

Asia-Pacific region exhibited fastest growing CAGR for optical detector during the analysis period of 2022 to 2030.

What are the current trends and dynamics in the global optical detector market?

Increasing adoption of optical detectors in IoT devices, growing demand for ADAS in vehicles, and comprehensive and flexible solutions offered by these systems drives the growth of global optical detector market.

Based on type, extrinsic segment held the maximum share optical detector market in 2021.