The laboratory rat has long been the model of choice in a variety of biomedical disciplines. In today's biomedical research, the laboratory rat is unavoidable. They are the gold standard in a variety of domains, including neurobehavioral research, cancer research, and toxicity. The number of animals used in scientific research each year is difficult to estimate. Rat models for illness research and experimentation have become more significant in recent years, according to research professionals all around the world. While other species such as Saccharomyces cerevisiae, fruit flies, and zebrafish have been used to study cancer, organ development, recombination, and large-scale mutations, the rat model allows researchers to get insights into human disease that other species cannot. Scientists employed the brown rat Rattus norvegicus to study human physiology and medicine two centuries ago, focusing on the effects of food and oxygen deprivation. Moreover, in the domains of physiology, pharmacology, immunology, toxicology, nutrition, behavior, and learning, rats have been used to solve a wide range of basic science problems relevant to prevalent human disorders. 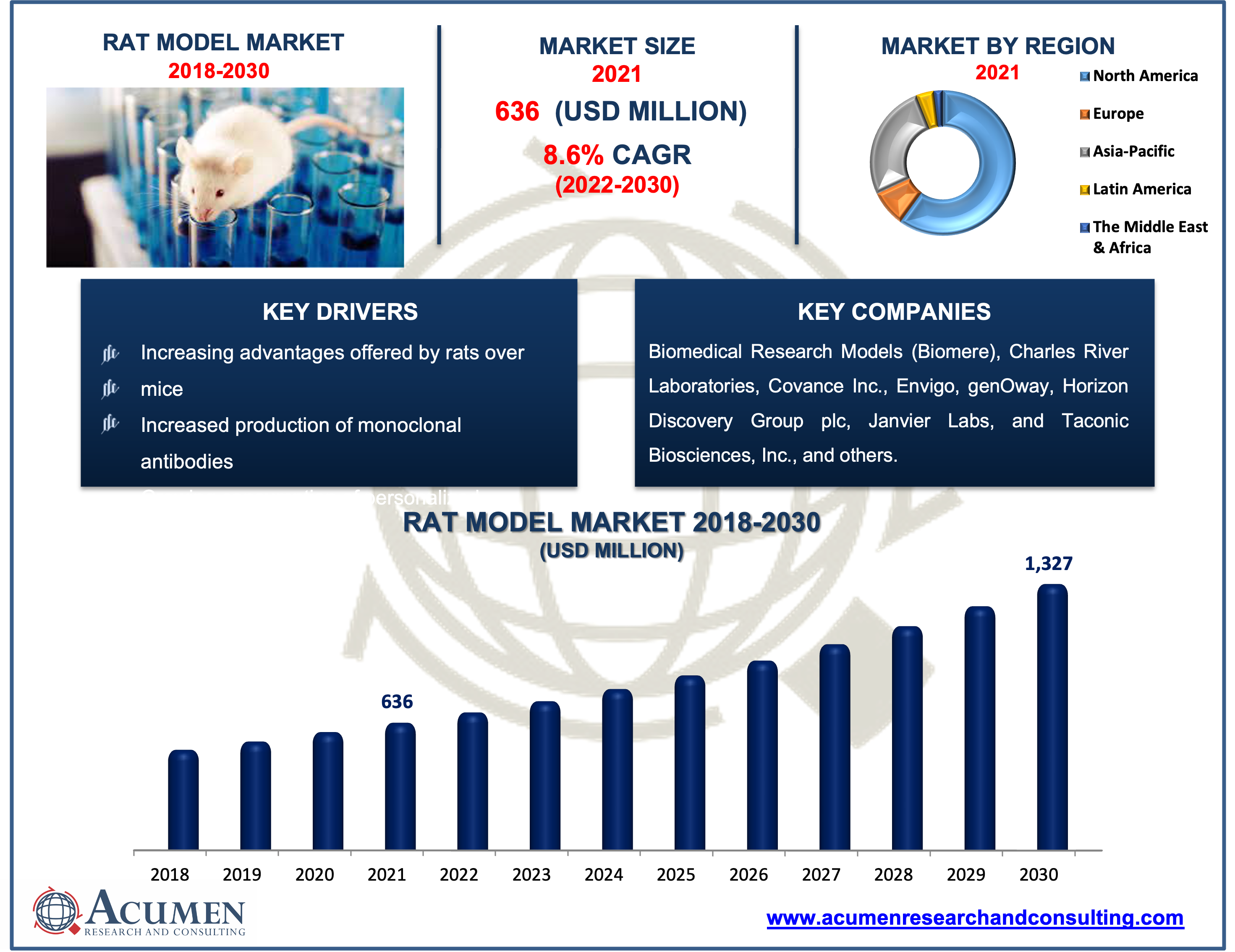 ·         Physiological similarities between human and rat

·         Growingapplications in the healthcare domain

The increasing preference of rats over mice is one of the leading factors that are driving the global rat model market revenue. The rat has traditionally been the chosen animal model for scientific study because of its genetic and physiological similarities to humans. When compared to mice, their larger size makes it easier to handle, sample, and perform procedures. Because of the large amount of data collected over time, rats have a better understanding of physiological responses and pathways than other species.

An increasing number of pharmaceutical research & development activities is one of the global rat model market trends that are fueling the demand for the industry. According to estimates, hundreds of millions per year of rodents are used for experimentation. Among them, 15 million are used in the US, 11 million in Europe, 5 million in Japan, 2 million in Canada, and less than one million in Australia. Rodents, such as rats, mice, and guinea pigs, account for over 80% of the experimental animals (10% are amphibians, fish, birds, and reptiles). Rabbits, goats, bulls, and, in smaller numbers, dogs, cats, and some primates make up the third group.

Rats consist of many similarities to human genetics that enables scientists and researchers to discover breakthroughs in the human medicine sector. The resemblance of their genetic structure to human DNA is one of the main reasons mice and rats are chosen as models for genetic experiments. Scientists have been able to investigate a number of physiological and pathological pathways in rats that would not be achievable in a mouse model due to their unique DNA and physiology.

However, strict regulatory guidelines imposed by several animal rights organizations limits the market to grow significantly. On the other hand, increased production of monoclonal antibodies, and growing consumption of personalized medicine are some of the aspects that are likely to boost the global rat model market share. 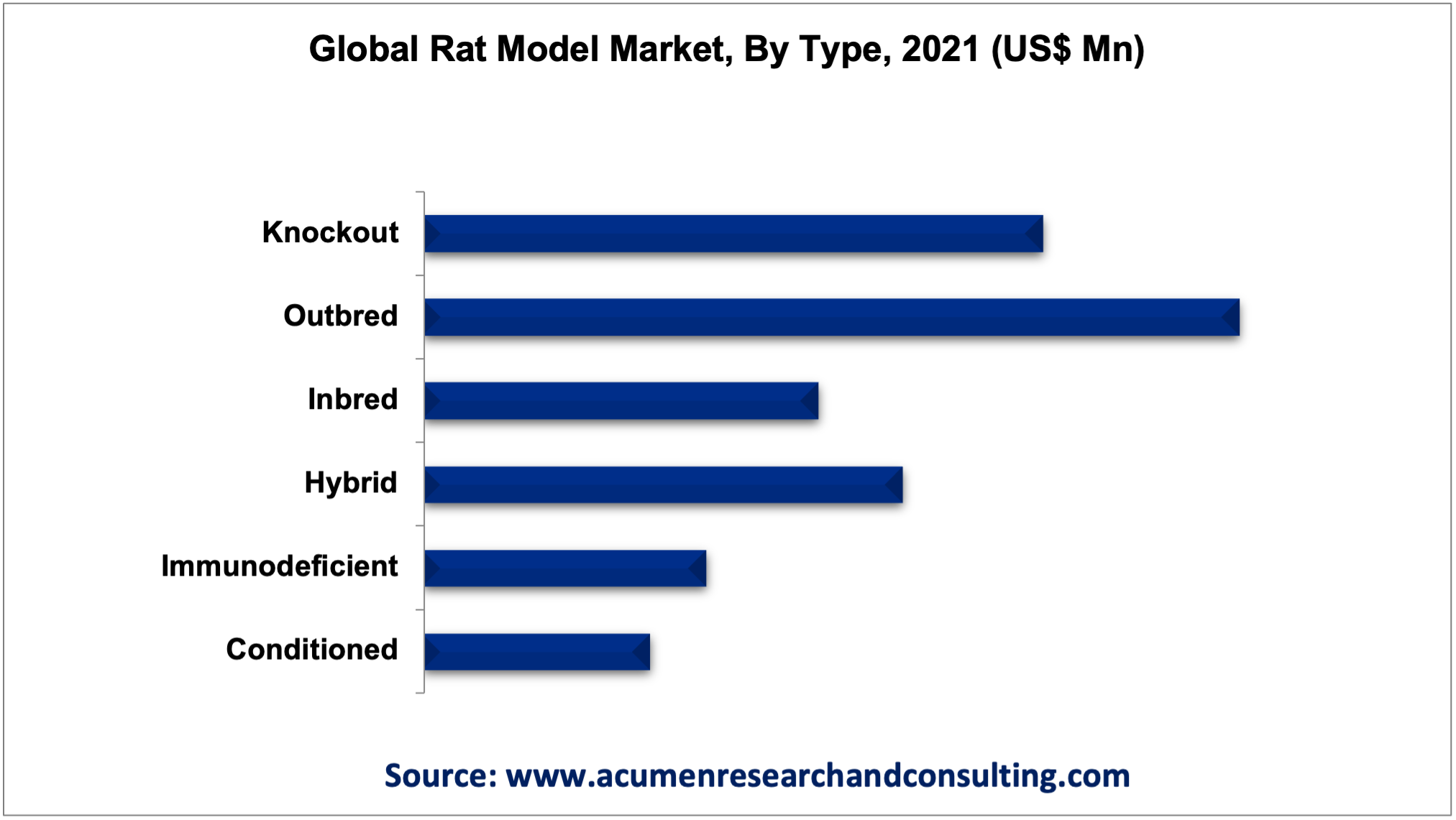 Based on our analysis, the outbred segment is likely to achieve a considerable market share in 2021. In preclinical research, outbred rat models are employed to replicate genetic variation in humans. These models can assist researchers to understand how particular genetic differences contribute to disease because human diseases are genetically related. In addition, outbred models have a genetic makeup that is similar to that of humans, are phenotypically stable, and are less vulnerable to environmental changes. Inbred strains have been isolated in large numbers, demonstrating a wide range of characteristics and serving as models for human features and disorders.

In the technology segment, embryonic stem cell is one of the significant technologies that have been used in rat models. Rat embryonic stem (ES) cells are considered to be a vital tool for creating transgenic rats. However, the other technology segment, obtained a significant market share in 2021 due to the increased adoption of Clustered Regularly Interspaced Short Palindromic Repeats (CRISPR). CRISPR technology is being more widely used in rat-based research due to the increased demand for conditioned and genetically modified animals.

Breeding generated a significant market share among services in 2021. However, the cryopreservation segment is expected to develop at the quickest rate during the forecast period 2022– 2030 since it requires less investment to keep rat strains alive for a longer period of time. Furthermore, cryopreservation segments aid in the collection of genetic material from rats after their reproductive lifespan has expired. This cuts down on the time and money required for rat reproduction. 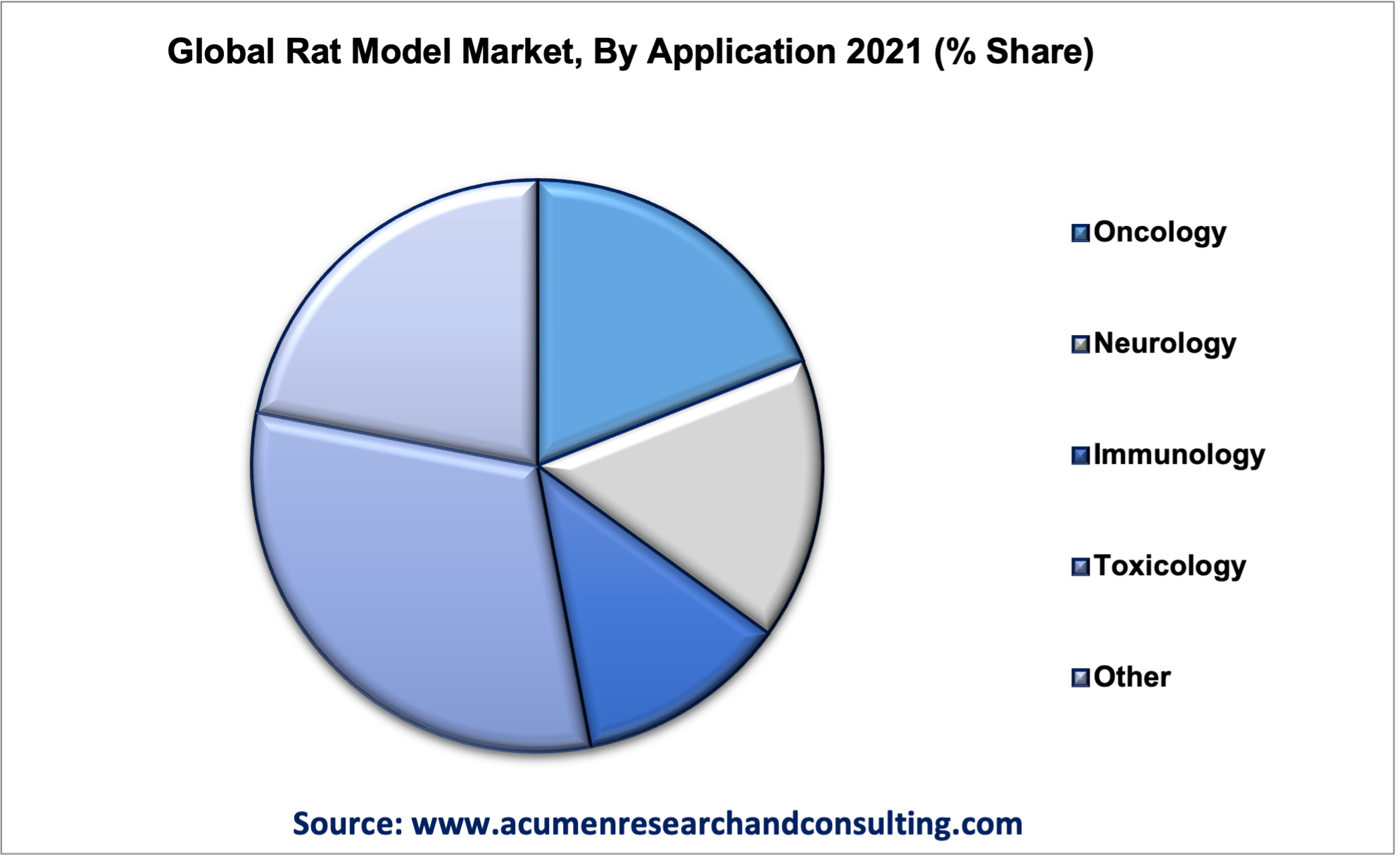 Out of these, the toxicology segment acquired a substantial market share in 2021. The rat has long been a popular model for toxicology research because it has a similar mechanism to humans for eliminating poisons. The toxicology and safety evaluation of pharmaceuticals has piqued people's interest in pharmacology, providing essential information on safety toxicological research and the development and usage of these drugs, particularly the study of the toxic effects of drugs. Thus, this segment shares are growing as the research & development activities continue in the coming years.

Among all the end-uses, the pharmaceutical and biotechnology companies segment generated significant revenue in 2021 due to the rising number of R&D expenditures by companies. Conversely, the CROs segment is anticipated to achieve the fastest growth rate throughout the forecast period 2022 – 2030. The rise of CROs is likely to be supported by the expanding number of new CROs and the increasing frequency of outsourcing research operations. As a result, this category is expected to increase at the quickest rate over the projection period.

Based on the regional segmentation, the North America region generated the maximum revenue in 2021. Prominent factors such as increasing research activities, growing demand for personalized medication, and rising healthcare expenditure are supporting the North America rat model market size. Meanwhile, the Asia-Pacific region is anticipated to witness the fastest CAGR in the coming years. This rapid expansion is partly owing to an increase in the number of academic and contract research organizations in Japan, China, Australia, and India, all of which present significant prospects for rat model manufacturers.

How much was the estimated value of the global rat model market in 2021?

The estimated value of global rat model market in 2021 was accounted to be US$ 636 Mn.

What will be the projected CAGR for global rat model market during forecast period of 2022 to 2030?

Which region held the dominating position in the global rat model market?

North America held the dominating share for rat model during the analysis period of 2022 to 2030.

Asia-Pacific region exhibited fastest growing CAGR for rat model during the analysis period of 2022 to 2030.

What are the current trends and dynamics in the global rat model market?

Based on type, outbred segment held the maximum share for rat model market in 2021.