The Global Refinery Catalyst Market Size accounted for USD 4,964 Million in 2021 and is estimated to achieve a market size of USD 6,939 Million by 2030 growing at a CAGR of 3.9% from 2022 to 2030. Stringent environmental regulations, together with rising demand for petroleum as well as petroleum-derived products/chemicals, are expected to drive the refinery catalyst market growth. Furthermore, the rising global demand for transportation fuel is likely to drive the refinery catalyst market value in the coming years. 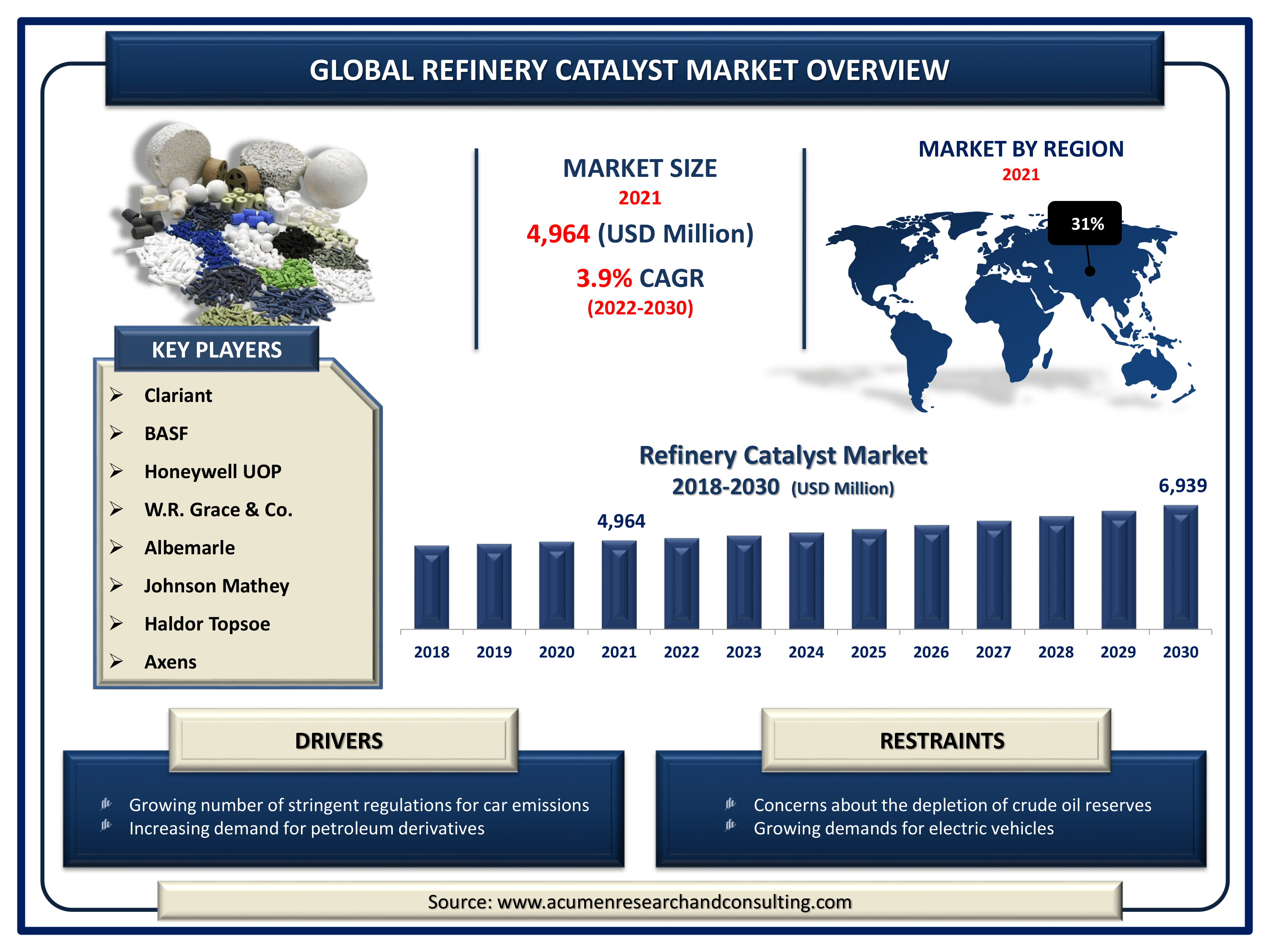 The rates of chemical reactions in refineries are commonly used by refineries in petroleum refineries due to their ownership. In addition, the quality of the petrol products generated by FCC and hydroprocessing will be improved. The market for refinery catalysts is known to minimize the environmental adverse effects of petrol and diesel. They assist to remove sulfur from crude oil. The development of the world catalyst refinery industry is primarily due to strict public rules on the use of crude petroleum products.

The development of the worldwide catalyst refining industry in the era of evaluation is driven by the increasing demand for cleaner oil products. In addition, an increasing worldwide population has caused the energy needed to help the industry grow. Moreover, increasing activities relating to oil and gas are also likely to fuel demand for catalyst refining over the forecast period, particularly in the emerging Asia-Pacific area.

Nearly one-third of worldwide power demand is made up of petroleum derivatives. These fuels include mainly petrol, diesel, jet fuel, fuel oil, and kerosene. Transport accounts for over 55 percent of the worldwide demand for oil fuels. More than 60% of worldwide energy usage is accounted for in the worldwide transport sector, consisting of cars, aircraft, and vessels. In 2017, the sales of private cars rose to 70 million units, at a good pace. The Asia-Pacific alone accounted for more than a third of the worldwide share of world automotive revenues, with China alone. This demand will probably continue to grow in the coming years with emerging financial norms for Asia-Pacific countries like South Korea, India, China, Thailand, and Indonesia. Other 45% of oil fuel demand comes from industry and energy generation, with the latter contributing only about 5%. The increasing demand for petroleum fuels will increase the crude oil refining industry, boosting refining catalysts market demand considerably compared to the forecast spell. The slow development of alternative energy sources like natural gas, solar energy, wind power, and other renewable sources is hindering refinery catalyst market growth. Crude oil is known to have an enormous global carbon footprint that damages environmentally friendly alternatives such as electric vehicles and solar power plants are sought by many companies. These variables may decrease the dependence on crude petroleum goods and, in turn, hamper the market in refineries around the globe in the coming years.

The worldwide refinery catalyst market segmentation is based on the type, material, and geography. 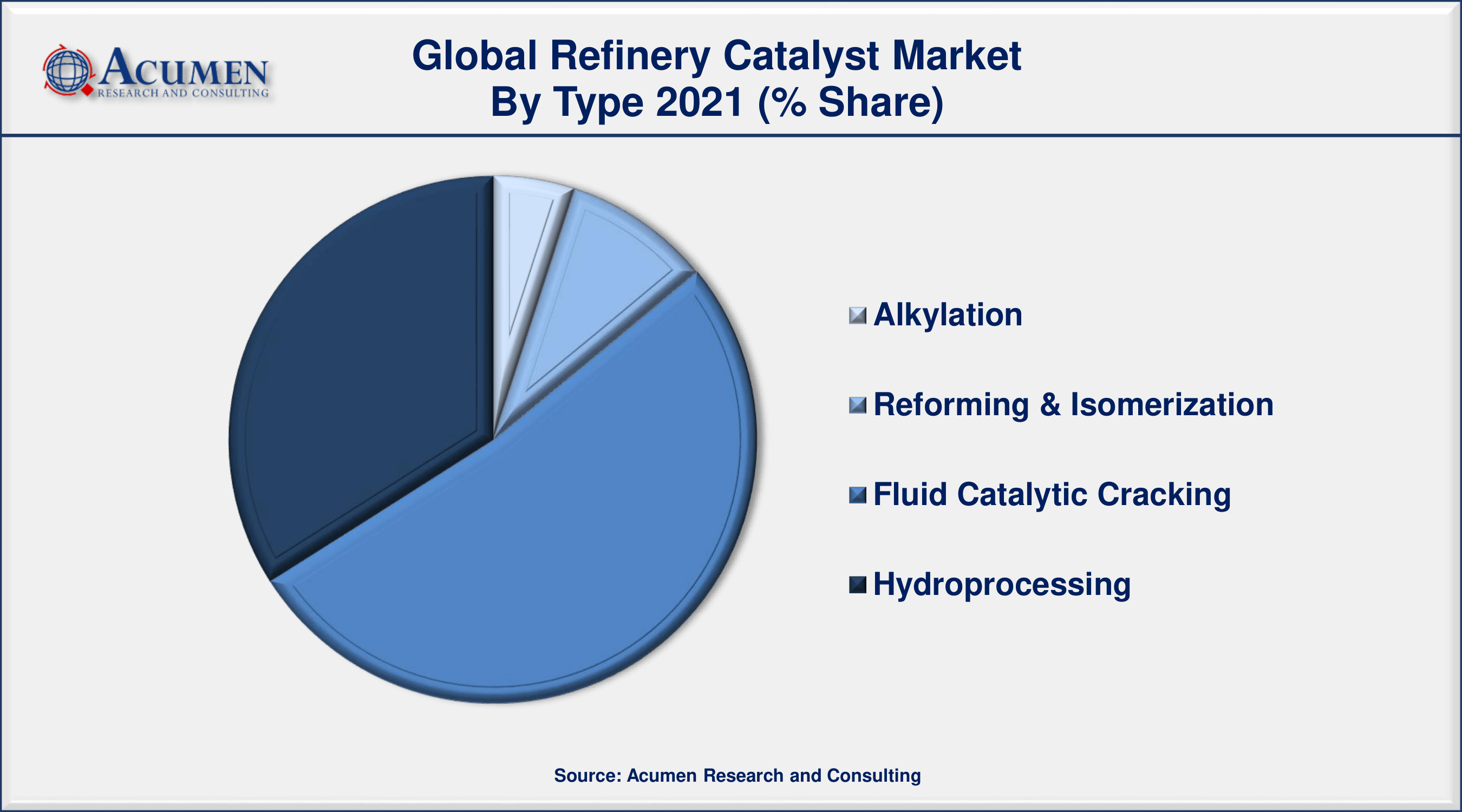 According to a refinery catalyst market forecast, the hydroprocessing segment is predicted to increase significantly in the industry over the next several years. This expansion is primarily due to increased demand for hydro-treating catalysts. Hydrotreating removes from the distilled fractions of crude oil and intermediate process streams, sulfur, nitrogen, olephins, aromatics, and other contaminants. With about 65% of the worldwide catalyst refinery market in 2021, FCC's segment will take hold. The FCC is a chemical process that uses a catalyst, primarily zeolite, together with heat to break greater molecular hydrocarbons into lighter hydrocarbons, with lengthy carbon chains. 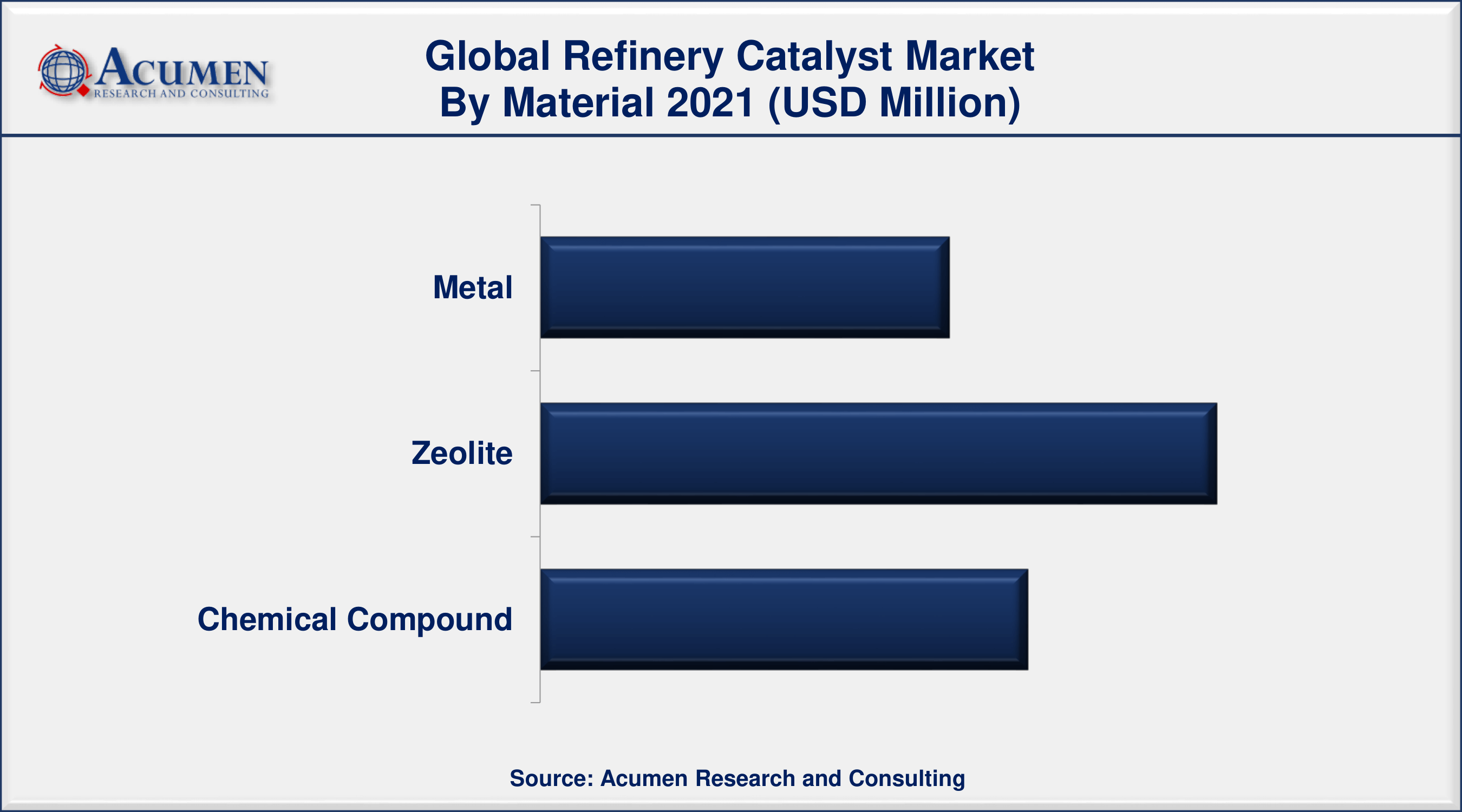 According to the refinery catalyst industry analysis, the zeolite segment is expected to lead the market. Zeolite products in the catalyst refineries industry recorded sales of more than USD 1.4 Million as the world's most popular item in FCC units. In general, zeolites of type Y are used as refinery catalysts because they are much more reactive than conventional products. Chemicals constituted more than 24 million dollars and constitute a very tiny section of the global market for a refinery catalyst. These chemicals offer low prices as appropriate petroleum refining alternatives, particularly in alkylation procedures.

Asia-Pacific Region Is Expected To Leads The Global Market

The larger petroleum production plants in China, India, Japan, and South Korea accounted for a share of over 31% of the worldwide catalyst refinery market in 2021. Due to the big amount of car inhabitants in these nations, the area is the demand center of most petroleum fuels. The area is also experiencing the most rapid development worldwide, as refineries in India and China are upgrading and expanding their ability. India with an annual capability of 60 MMTPA is the biggest refinery complex in the world in the Reliance Industry. The refineries in this area are now modernizing and becoming more complicated so that light distilled products can be extracted from harder residues to boost their profit margins.

The market for refining catalysts in North America in 2018 produced more than USD 810 million, representing just under 22 percent of worldwide demand. With more than 140 operating refineries and a capacity of nearly 20 million barrels per day, the nation has the largest crude refining ability in the globe. The market in Europe has been hampered by the financial slowdown in recent years. However, the increasing building and car industries have allowed refinery catalysts to grow steadily. The shale gas boom in North America attracted many markets and has led to the development of numerous exploration and refining projects. This, in turn, resulted in the use of the catalyst in lighting heavy crude oil. The growing use of North American oil feedstocks creates the greatest possibilities for development in the catalyst refinery industry.

What is the size of global refinery catalyst market in 2021?

The estimated value of global refinery catalyst market in 2021 was accounted to be USD 4,964 Million.

What is the CAGR of global refinery catalyst market during forecast period of 2022 to 2030?

The projected CAGR refinery catalyst market during the analysis period of 2022 to 2030 is 3.9%.

Which region held the dominating position in the global refinery catalyst market?

Asia-Pacific held the dominating refinery catalyst during the analysis period of 2022 to 2030.

North America region exhibited fastest growing CAGR for refinery catalyst during the analysis period of 2022 to 2030.

What are the current trends and dynamics in the global refinery catalyst market?

Growing number of stringent regulations for car emissions across the world, and increasing demand for petroleum derivatives, drives the growth of global refinery catalyst market.

By material segment, which sub-segment held the maximum share?

Based on material, zeolite segment is expected to hold the maximum share refinery catalyst market.