The Global Satellite Internet Market Size accounted for USD 3,985 Million in 2021 and is estimated to achieve a market size of USD 17,431 Million by 2030 growing at a CAGR of 18.2% from 2022 to 2030. The increased usage of satellite services by enforcement, firefighter, and other law and government agencies in a number of emerging economies, as well as improvements in international wireless communication, are the principal elements that affect the worldwide satellite internet market growth. Furthermore, the increase in government attempts to integrate satellite broadband telecommunication services benefits the satellite internet market value. 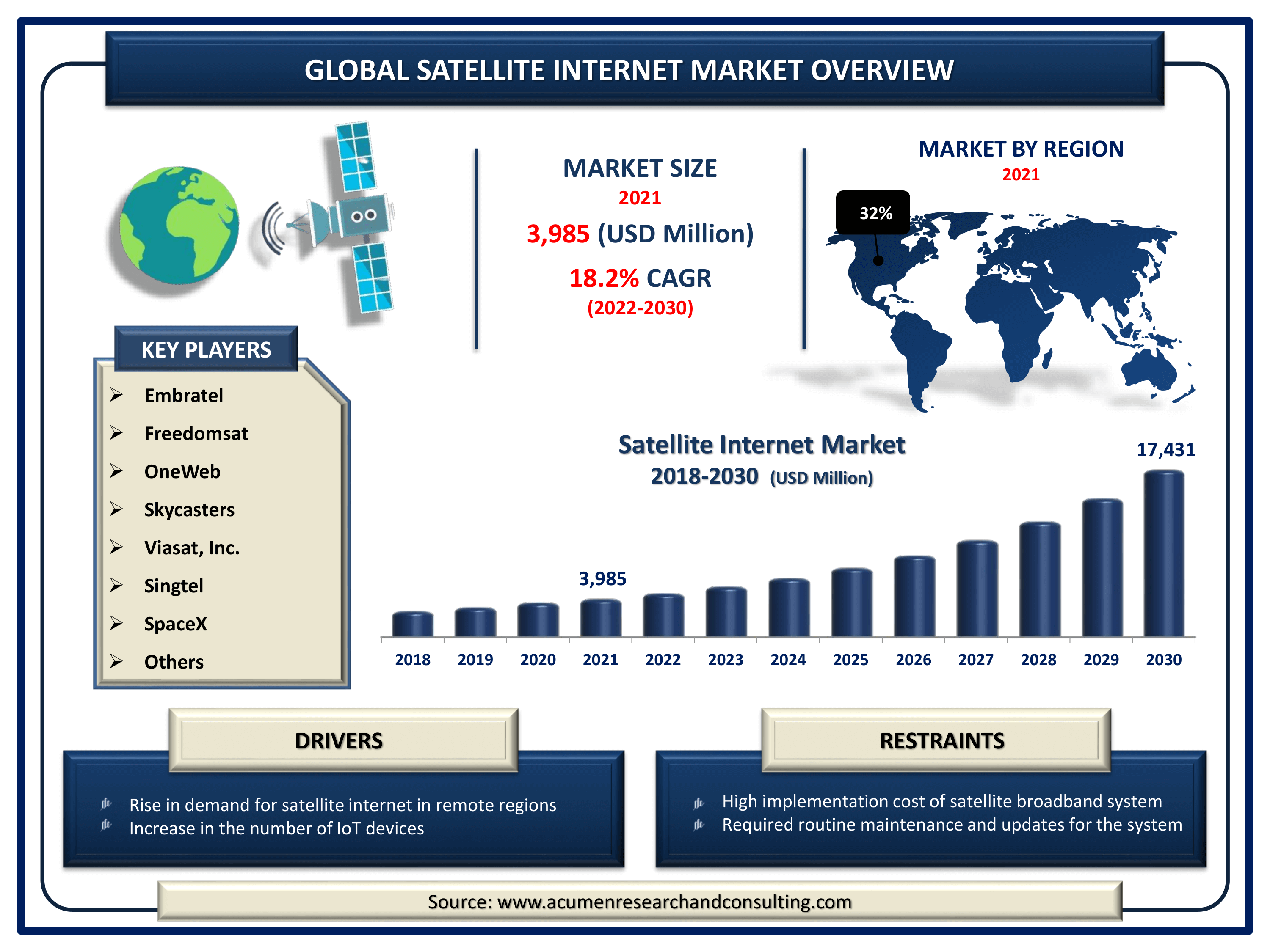 Nowadays, satellite communication may provide a terrestrial-grade experience with audio, video, and information that can be accessed from anywhere around the world. Satellite internet is broadband that is sent wirelessly from satellites that orbit the Earth. A worldwide network of numerous satellites linked to a centrally located network management system can provide ubiquitous service. One of the most notable benefits that satellite internet provides to organizations is the capacity to deliver a connection anywhere in the globe at the bandwidth of several megabits over remote locations such as seas and whole continents, which can be traversed quickly and easily with a single satellite. Similarly, a secure and private link can be used to interconnect several remote locations separated by great distances.

Furthermore, the deployment of cutting-edge technologies such as AI and IoT has foreshadowed the advent of intelligent transportation systems (ITS). Real-time vehicle detection enabled by ITS enables customers and freight operators to instantly share and obtain information. By enabling continuous and seamless data flow between the vehicle and the transport hub, SATCOM essentially eliminates the need for terrestrial networks in transportation. As a result of the usage of satellites in the logistics and transportation networks, the satellite internet industry will have future development prospects.

The global satellite internet market segmentation is based on the band type, end user, and geography. 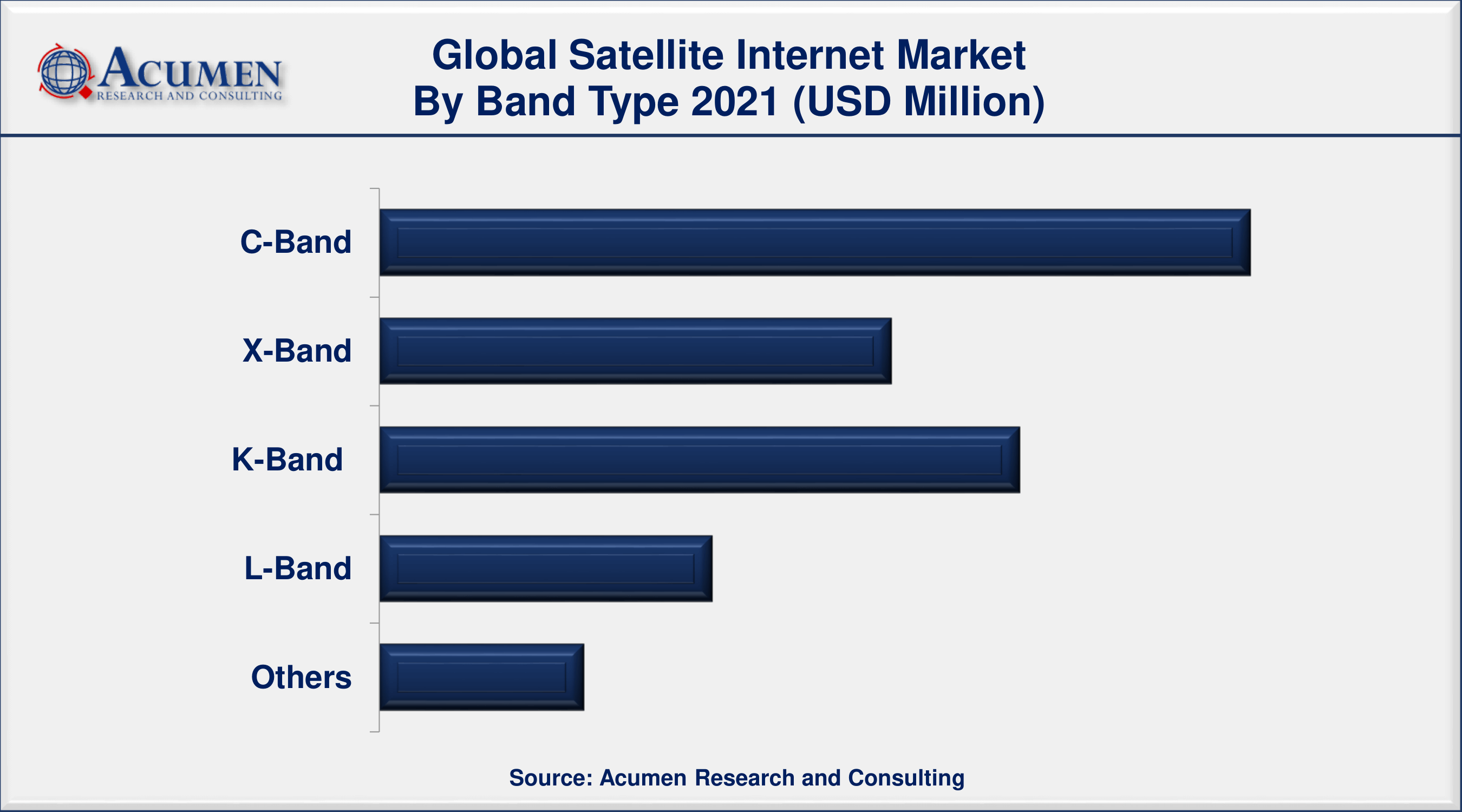 According to satellite internet industry analysis, the C-band segment could lead the market in 2021. This growth is attributed to an increase in the acceptance of C-band satellite internet providers among end customers as a result of the C-band satellite's high-speed internet connectivity in regions that experience heavy rain and a weak transmission medium. The C-Band satellite network is primarily utilized for high-quality data and voice communications, as well as backhauling. However, when compared to higher satellite frequencies like Ku-Band, such as those within the C-band, the signals are less concentrated. This is because the wavelength in the C Band is longer. However, because the signals are less focused, they are less influenced by rain. 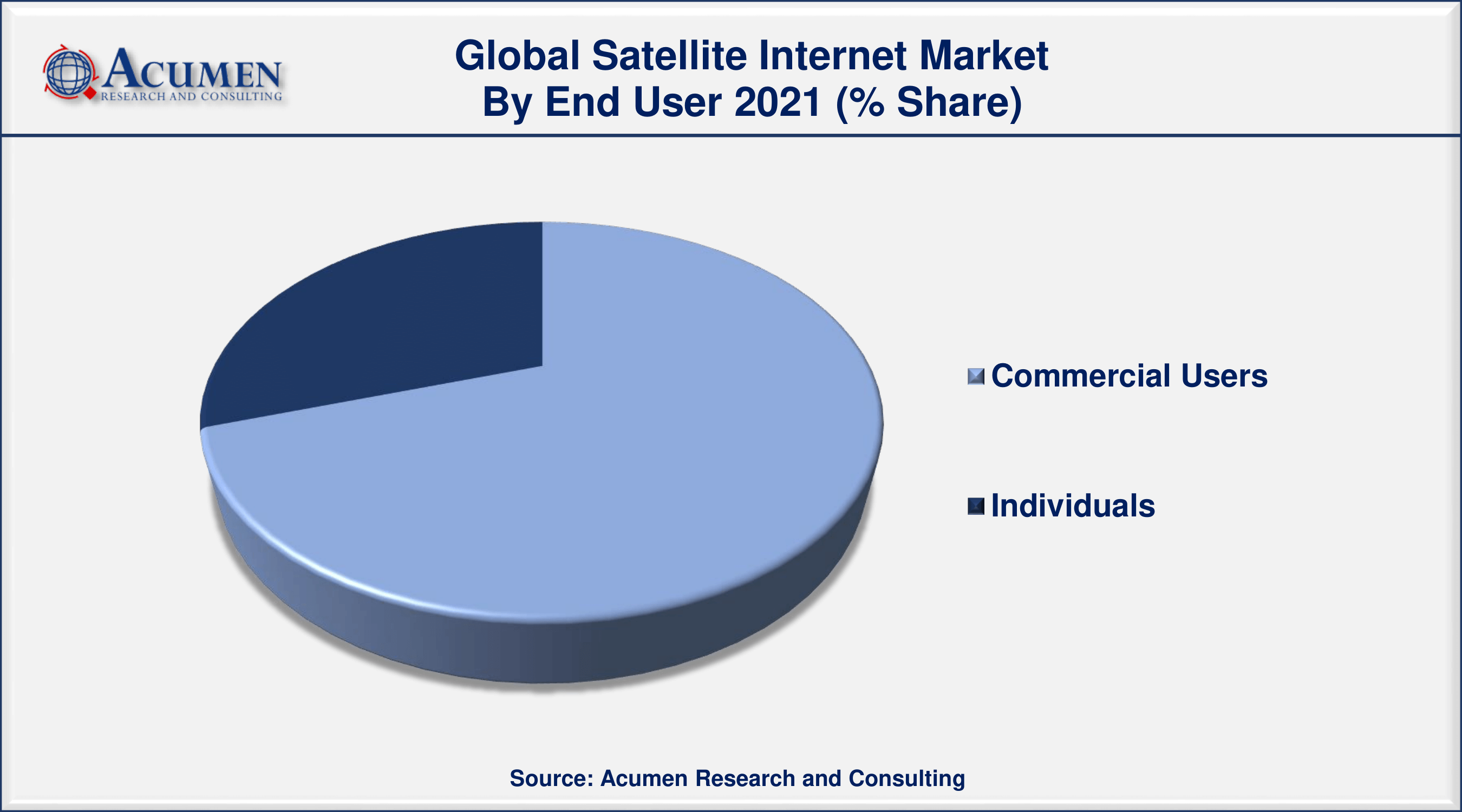 In terms of end users, the commercial users sector held the largest market share in 2021. The segment has grown as a result of reasons such as the widespread use of satellites for transmission and the need for remote monitoring coverage during wartime and emergency circumstances. Commercial users are further classified as government and public sector, corporate institutions, maritime and aircraft, and others.  Satcom services have been widely adopted by the security and government forces, allowing them to equip and improve communication across a wide range of military and defense assets, including fighter aircraft. Satellite communication systems have grown in popularity as a consequence of the increasing use of unmanned aerial vehicles and their diverse applications in both military and non-military situations.

Geographically, the North America market is expected to acquire the most market share over the projection period. This expansion is due to expanding demand for internet connectivity across the region, as well as increased adoption of innovative technology. The populace of industrialized countries such as the United States and Canada is extremely tech-savvy and reliant on internet platforms. This increases the desire for high-speed broadband, which is expected to enhance regional market growth. Furthermore, government spending in the military and defense sector is steadily expanding, which is expected to enhance regional market growth. Additionally, the market expansion is supported by Viasat, Inc., Telesat, and EchoStar Corporation, among other satellite communication service providers. Furthermore, it is expected that the regional market would increase significantly over the next several years as special forces and defense communication infrastructure improves.

What is the size of global satellite internet market in 2021?

The estimated value of global satellite internet market in 2021 was accounted to be USD 3,985 Million.

What is the CAGR of global satellite internet market during forecast period of 2022 to 2030?

The projected CAGR satellite internet market during the analysis period of 2022 to 2030 is 18.2%.

Which region held the dominating position in the global satellite internet market?

North America held the dominating satellite internet during the analysis period of 2022 to 2030.

Asia-Pacific region exhibited fastest growing CAGR for satellite internet during the analysis period of 2022 to 2030.

What are the current trends and dynamics in the global satellite internet market?

Increasing use of satellite services in law, firefighting, and other agencies, as well as advancements in communication technology around the world, drives the growth of global satellite internet market.

By band type segment, which sub-segment held the maximum share?

Based on band type, C-band segment is expected to hold the maximum share satellite internet market.