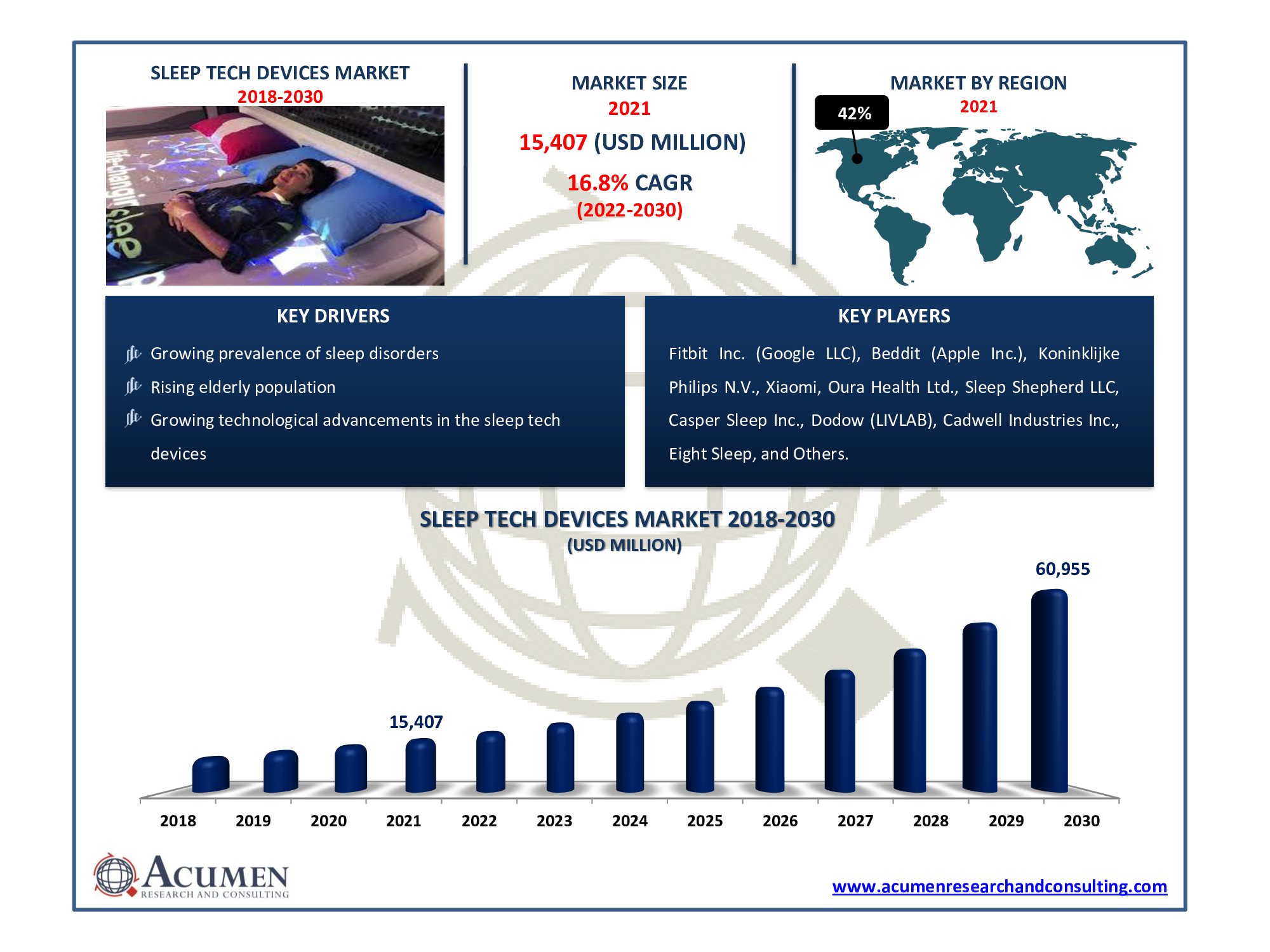 Sleep devices are tools that help the user understand individual sleep patterns to improve sleep and optimize daytime performance or treat sleep problems such as sleep disorders. Some of these sleep aids are worn by the user while sleeping. The majority of sleep monitoring tech work by using sensors on a gadget to collect and summarise information about the sleeper. While lab-based sleep tests record patterns directly through activity in the brain, sleep devices use sensors that detect other physical signs such as heart rate and body movement. Wearable devices collect data on the sleeper all through the night, whereas other trackers may be placed under the mattress, on the mattress, or next to the bed to collect data invisibly. Almost all sleep trackers send this information to a device, which then runs it through a method to analyze and display the results.

Increasing cases of sleep disorders throughout the world is the primary factor fueling the sleep tech devices market growth. Inadequate sleep is common across various age groups globally and is considered a public health epidemic that is frequently unrecognized, under-reported, and has rather high economic costs. Inadequate sleep causes body systems to malfunction, increasing the likelihood of cardiovascular morbidity, diabetes mellitus, obesity, cognitive function derailment, vehicular accidents, and workplace accidents. Inadequate sleep is linked to a variety of negative health and social outcomes, which include poor academic and labor-force performance. Sleep deprivation has been linked to seven of the top fifteen causes of death in the United States, including cardiovascular disease, diabetes, malignant neoplasm, accidents, cerebrovascular disease, hypertension, and septicemia.

However, strict regulatory frameworks and the high cost of sleep tech devices are acting as a major hindrance to the market. Moreover, the miniaturization of new devices is expected to gain significant traction throughout the forecast timeframe. With technological advancements and miniaturization, it has become easy for users to wear and track their body movements and sleep timings. Many of these new tools monitor the sleeper using motion sensors, microphones, and cameras. Some of them use temperature and light sensors. Furthermore, some of the more recent sleep wearables make use of electrodes and other sensors attached to the body. 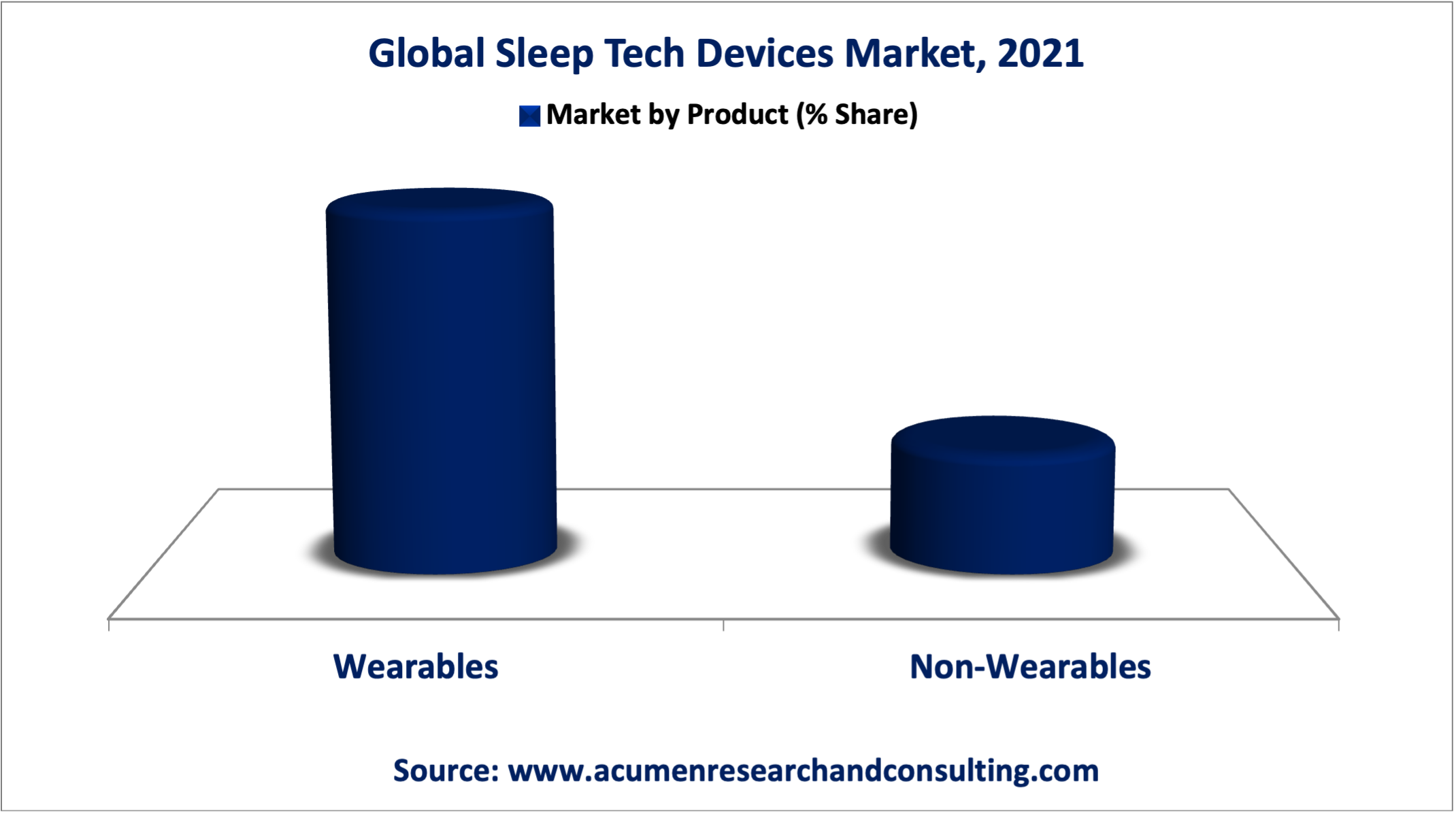 Based on product, the wearables segment held a notable sleep tech devices market value in 2021 and is anticipated to do so in the forecasted years 2022 – 2030. Wearable technology is booming as part of the digital health revolution, producing a slew of novel, highly sophisticated, and reasonably priced consumer devices that collect data from multiple sensors and claim to extract information about users' behaviors, including sleep. In addition to activity, these devices can now capture various bio-signals for determining heart rate and variability, skin conductance, and temperature. They operate continuously, generating massive datasets (Big Data), with the potential to provide an unprecedented window into users' health. As a result, the sleep tech devices market forecast that wearable devices will fuel the demand for the industry in the coming years. 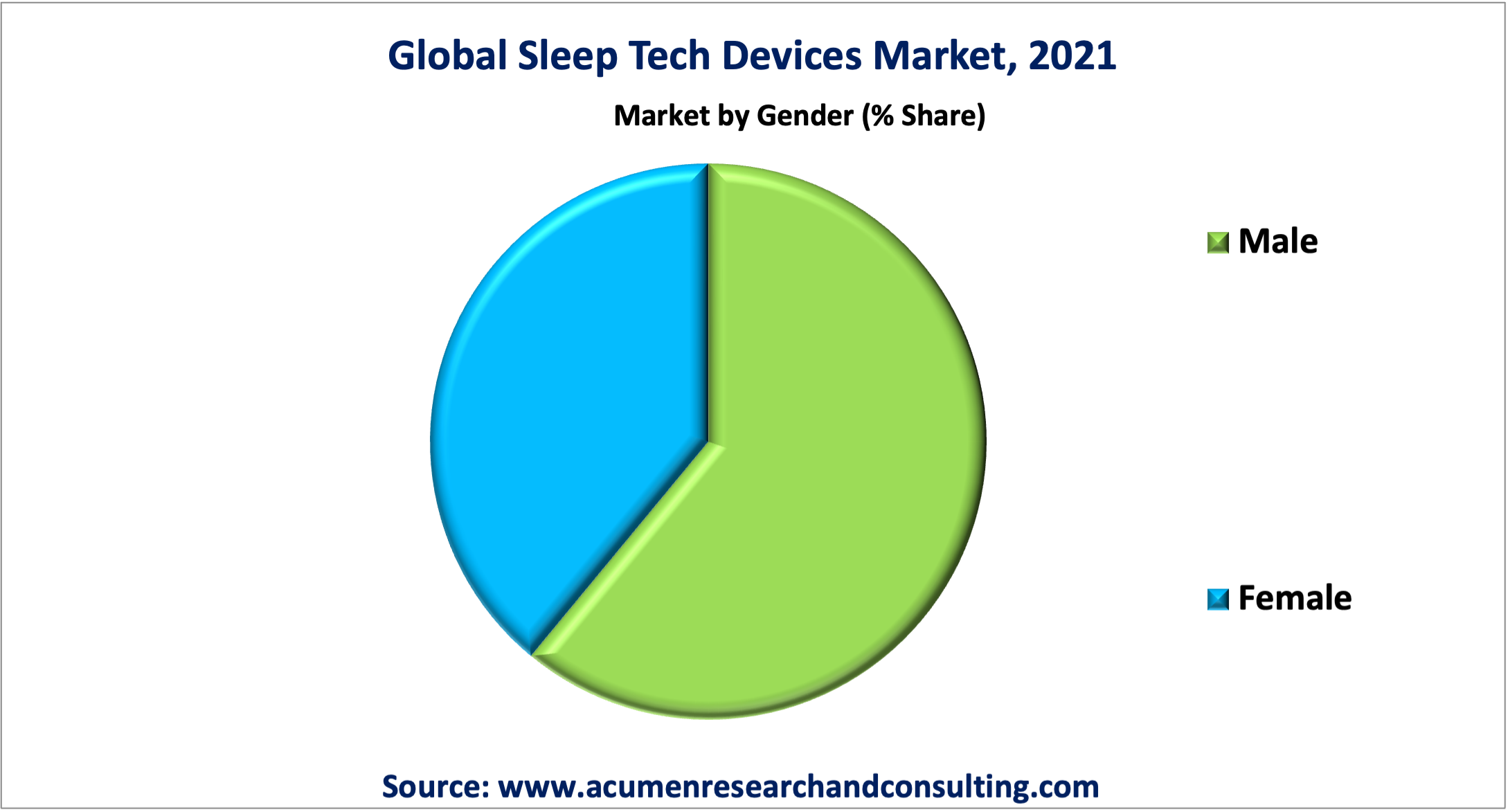 The male gender gathered a significant amount of industry share during the forecast timeframe from 2022 to 2030. This increase can be attributed to increased stress and a hectic work or travel schedule, which leads to sleep disorders in men. In addition, the prevalence of sleep apnea is witnessed higher in middle-aged men as compared to women, which also fuels the demand. However, due to major hormonal transitions in a woman's life, e.g. pregnancy, menstruation, and menopause, the female segment is expected to grow at a significant rate in the coming years.

According to our analysis, the specialty clinics and hospitals segment will account for a considerable share of the sleep tech devices industry in 2021. This is credited because sleep tech devices are generally referred by healthcare professionals, which are primarily provided by hospitals and specialty clinics. However, the direct-to-consumer segment will witness a substantial growth rate due to the increasing adoption of online ordering. Many people prefer wearable devices such as smartwatches and bands that are easily available on e-commerce websites, thereby driving the direct-to-consumer segment demand.

Among all the regions, North America generated the largest sleep tech devices market revenue in 2021. Factors such as increasing incidences of chronic sleep disorders, a large percentage of obese people, a fast-paced lifestyle, and an increase in the geriatric population have all contributed to North America's industry leadership. According to the Sleep Foundation statistics, insufficient sleep affects nearly 35% of American adults, 25% of young children, and as many as 72% of high school students. Meanwhile, the Asia-Pacific region is likely to achieve the fastest growth rate throughout the forecast timeframe. The rising number of chronic patients, increasing awareness about sleep disorders, and growing obstructive sleep apnea cases in the region are all supporting the Asia-Pacific sleep tech devices industry.

What was the market size of global sleep tech devices market in 2021?

What will be the CAGR for global sleep tech devices market during forecast period of 2022 to 2030?

Which region held the dominating position in the global sleep tech devices market?

North America held the dominating share for sleep tech devices during the analysis period of 2022 to 2030.

Asia-Pacific region exhibited fastest growing CAGR for sleep tech devices during the analysis period of 2022 to 2030.

What are the current trends and dynamics in the global sleep tech devices market?

By segment product, which sub-segment held the maximum share?

Based on product, wearables segment held the maximum share for sleep tech devices market in 2021.