Sorbitol is primarily consequent from corn, seaweed, fruits, and berries. It is the type of sugar or sweetener alcohol extorted from the corn syrup and also from fruits and berries such as pear, prunes, apples, and others. It is made through the catalytic hydrogenation of sucrose. In addition, it is a sugar substitute for low-calorie sweeteners, which is used in many foodstuffs like ice cream, candy, gum, baked goods, toothpaste, cosmetics, personal care, pharmaceuticals, and others.Sorbitol is evident to growdue to the launch of low-sugar foods by manufacturers in the food and beverage industry. Moreover, increasing adaptation of the diabetic and dietetic food and beverages, growing products demand like as a substitution for the sugar in consumer food products is anticipated to drive demand for the product over the forecast period. 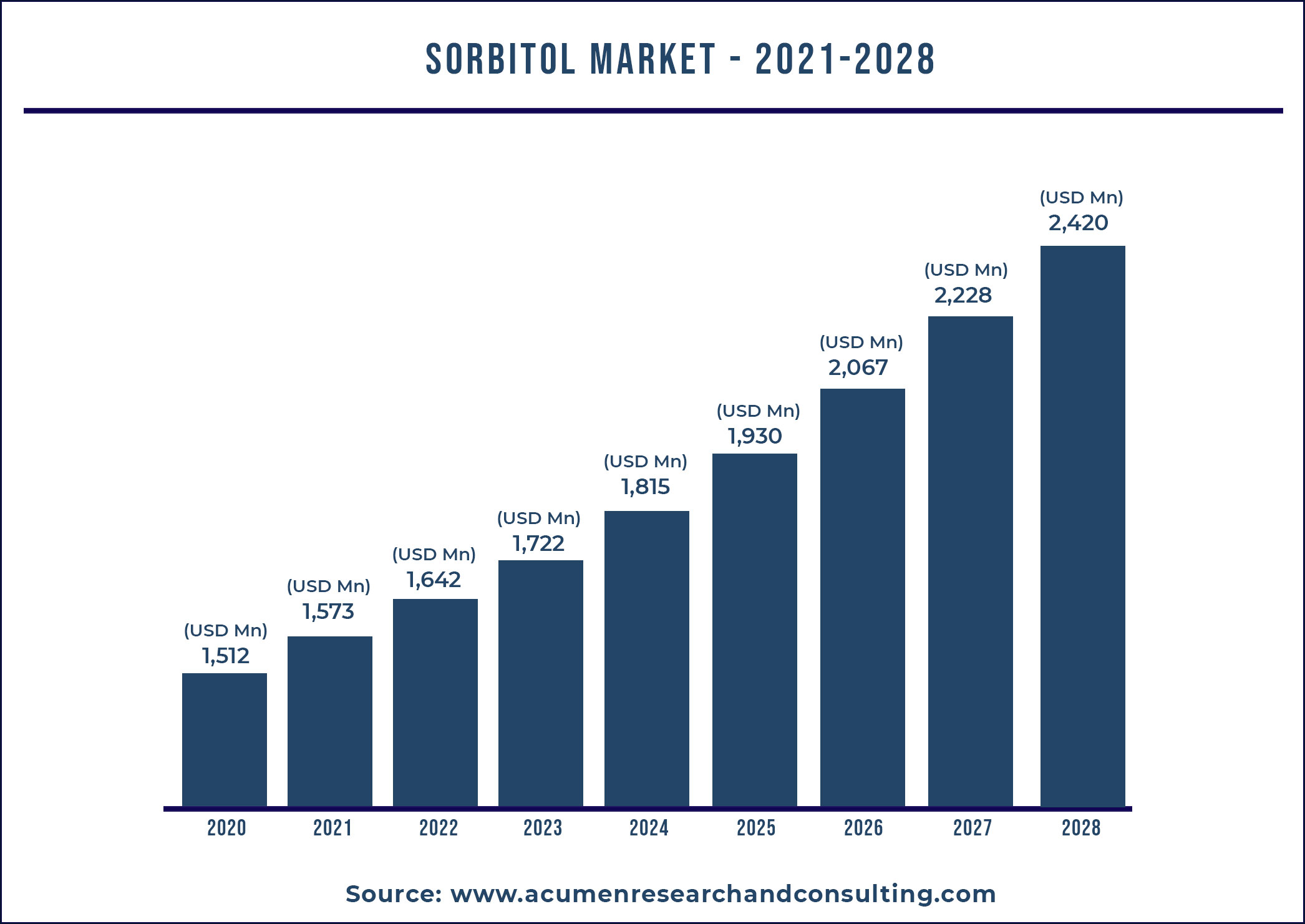 One of the primary factors driving the growth of the sorbitol market is the increasing consumer preference toward low-calorie food. Growing sedentary lifestyle in the developed countries have resulted in surging health problems such as diabetes and obesity. Hence, to overcome such situation many people have opted for low-calorie foods and sugar substitute in their day-to-day diet instead of traditional high calorie sugar products. Sugar-alcohols such as sorbitol are as sweet as sugar but the lower in calories and also do not have negative effects of traditional sugar such as raising blood sugar level or tooth decay among other. It also has certain digestive benefits due to its hyperosmotic nature which help in better bowel movement and keeping the gut healthy.These are the factors are propelling the growth of the sorbitol market across the globe throughout the forthcoming years.

Sorbitol usage in food and beverages is increasing more than ever lately. Baked food products, confectioneries, and chocolates are some of the prominent products where sorbitol is frequently used as texturizer due to its non-carcinogenic, humectants and moisture-stabilizer properties. The global consumption of chocolate confectioneries was growing at a CAGR of 2% during the period from 2013 to 2018, while it grew at a rate of more than 7.8% in China, India and Asia Pacific as a whole during the same period. Moreover, baked food products grew at a CAGR or 4.6% globally during 2013 to 2018. Apart from confectionery and baked products, sorbitol is also used as an alternate feedstock for the production of propylene glycol. Propylene glycol is a synthetic food additive which has extensive application in food & feed, cosmetics, functional fluids, polymers among others. Hence, range of industrial applications of sorbitol will further drive the market during the forecast period. 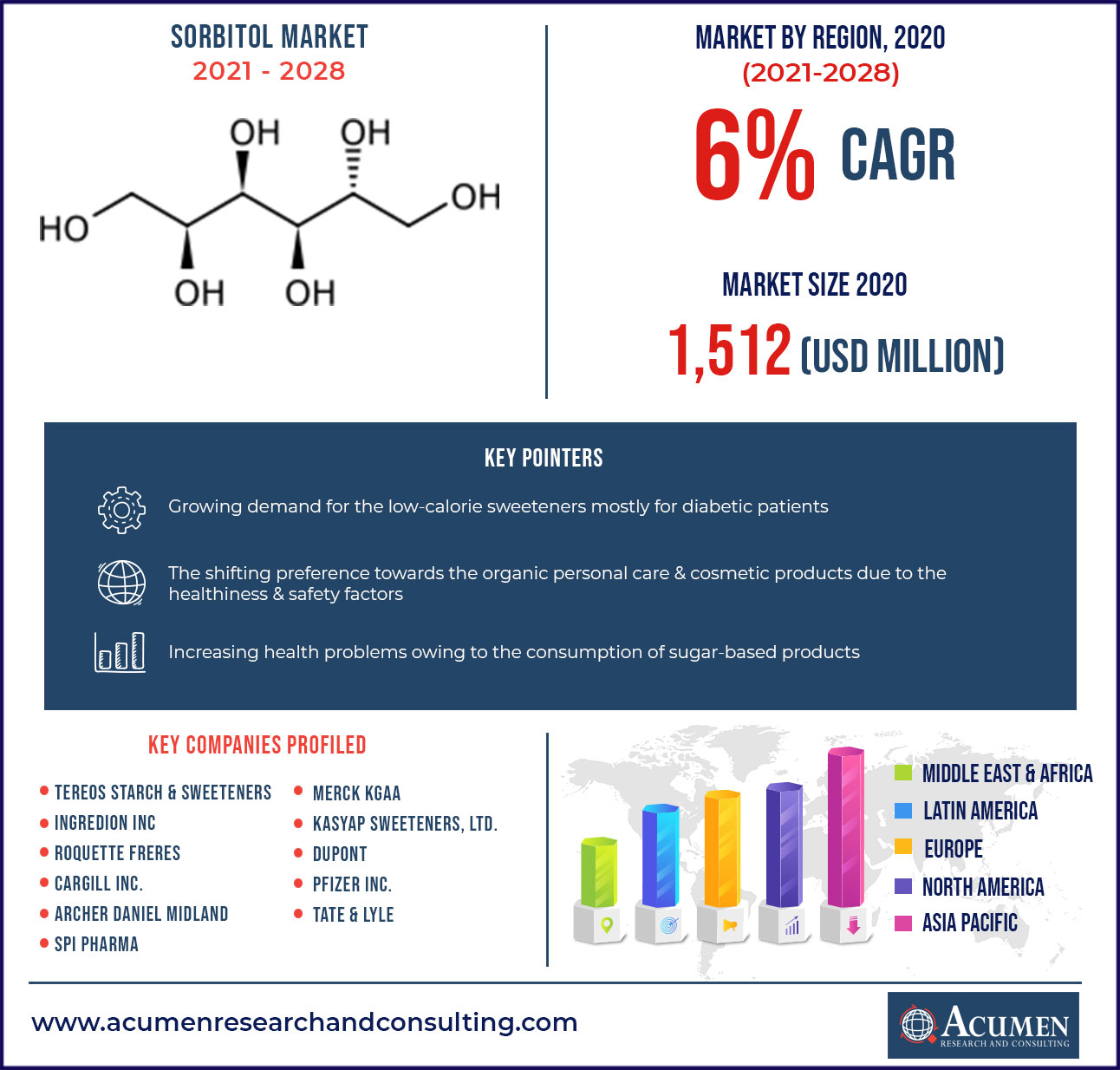 Liquid/Syrup sorbitol held dominatingmarket share as it is able to bind water molecules and stabilize the mass in numerous cosmetics, personal care products, foods and beverages.

Based on the end-use, the pharmaceuticals segment is leading the market share and is expected to expand during the forecast period, due to growing demand for sorbitol in this segment is used in the manufacturing of ascorbic acid for vitamin C tablets.

Among all the regions, Asia Pacific led the market and accounted for more than 55.0% share of the global revenue in 2020 owing to rising health-conscious consumers, increase in the numerous emerging consumer markets growing at a high speed is fuelling the market for sorbitol in the region. In addition, the changing lifestyles of public and urbanization in emerging countries have propelled the popularity of product by the end-users. Moreover, sorbitol is widely being used for non-food applications in the Asia Pacific, for instance, Japan has been the main importer of the product for the oral care industry.

The growing penetration of the sorbitol in the European region is due to the well-established food and beverages industry that keeps constantly developing and adapting for the latest ingredients. This region is not only one of the substantial markets for food and beverages, but also the most organized market. Furthermore, the market in Europe is projected to expand the growth opportunities of the product as a substitute for sugar in sugar-based foods and beverages and meat products as sorbitol is used to avoid the burning of meat.

How much was the market size of global Sorbitol Market in 2020?

The market size value of global Sorbitol Market in 2020 was accounted to be USD 1,512 Million

What will be the projected CAGR for global Sorbitol Market during forecast period of 2021 to 2028?

Which region held the dominating position in the global SorbitolMarket?

What are the current trends and dynamics in the Sorbitol?

By segment Application, which sub-segment held the maximum share?

Based on type, liquid/Syrup sorbitol segment held the maximum share for Sorbitol Market in 2020