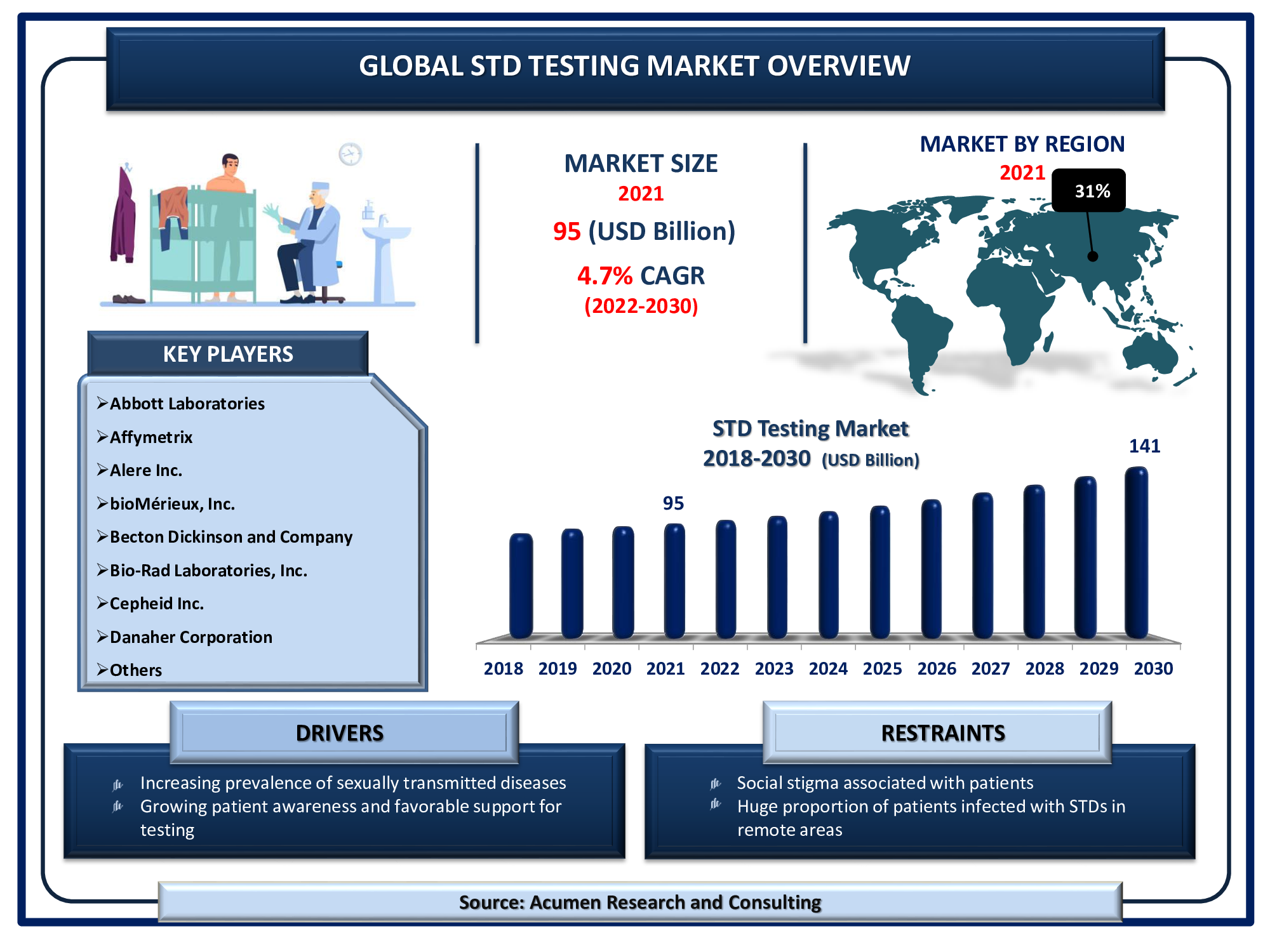 The growing prevalence of STDs around the world is the primary driver of the industry. According to the World Health Organization, over 374 million new infections are acquired among people each year. Chlamydia, syphilis, gonorrhea, and trichomoniasis are the most common. It is also estimated that 500 million people between the ages of 15 and 49 are infected with the herpes simplex virus in their genital area (HSV). As a result, the value of the STD testing market is multiplying as the number of patients increases around the world.

Another factor driving the STD testing market is increased patient awareness and favorable government support for testing. Adolescents and young adults between the ages of 15 and 24 are more vulnerable to STIs than older adults. According to the World Health Organization, 20% of HIV/AIDS patients are in their twenties, and one out of every twenty adolescents contracts an STI each year. Youths are more likely than adults to engage in unprotected sex, have multiple sexual partners, and engage in transgenerational and transactional sex. The Centers for Disease Control and Prevention (CDC) recommends that sexually active people get tested for STDs. Furthermore, all adolescents and adults aged 13 to 64 should be tested for HIV at least once. Every year, all sexually active women under the age of 25 should be tested for gonorrhea and chlamydia. Additionally, all pregnant women should be tested for HIV, syphilis, hepatitis B, and C.

However, the social stigma associated with these tests prevents the market from expanding. According to the WHO, barriers to bigger and more effective use of these treatments include a lack of public awareness, a lack of training among health workers, and a long-standing, widespread stigma surrounding STIs. However, a large proportion of sexually infected people live in remote areas where rapid testing is not feasible, resulting in a lack of testing. This factor also inhibits market growth.

Furthermore, rising government initiatives in various countries are expected to generate a plethora of growth opportunities for the market in the coming years. The National Aids Control Programme (NACP) IV, initiated by the National Aids Control Organization (NACO), is an HIV/AIDS prevention and control programme in India. The NACP IV programme aimed to provide universal and standardized high-quality STI/RTI services in all healthcare settings. Furthermore, NACO offers free standardized STI/RTI services to the public. As a result, favorable government initiatives are assisting the STD testing market to grow positively, particularly in India, Indonesia, Thailand, and African countries, among others.

The worldwide STD testing market is split based on disease type, location of testing, and geography. 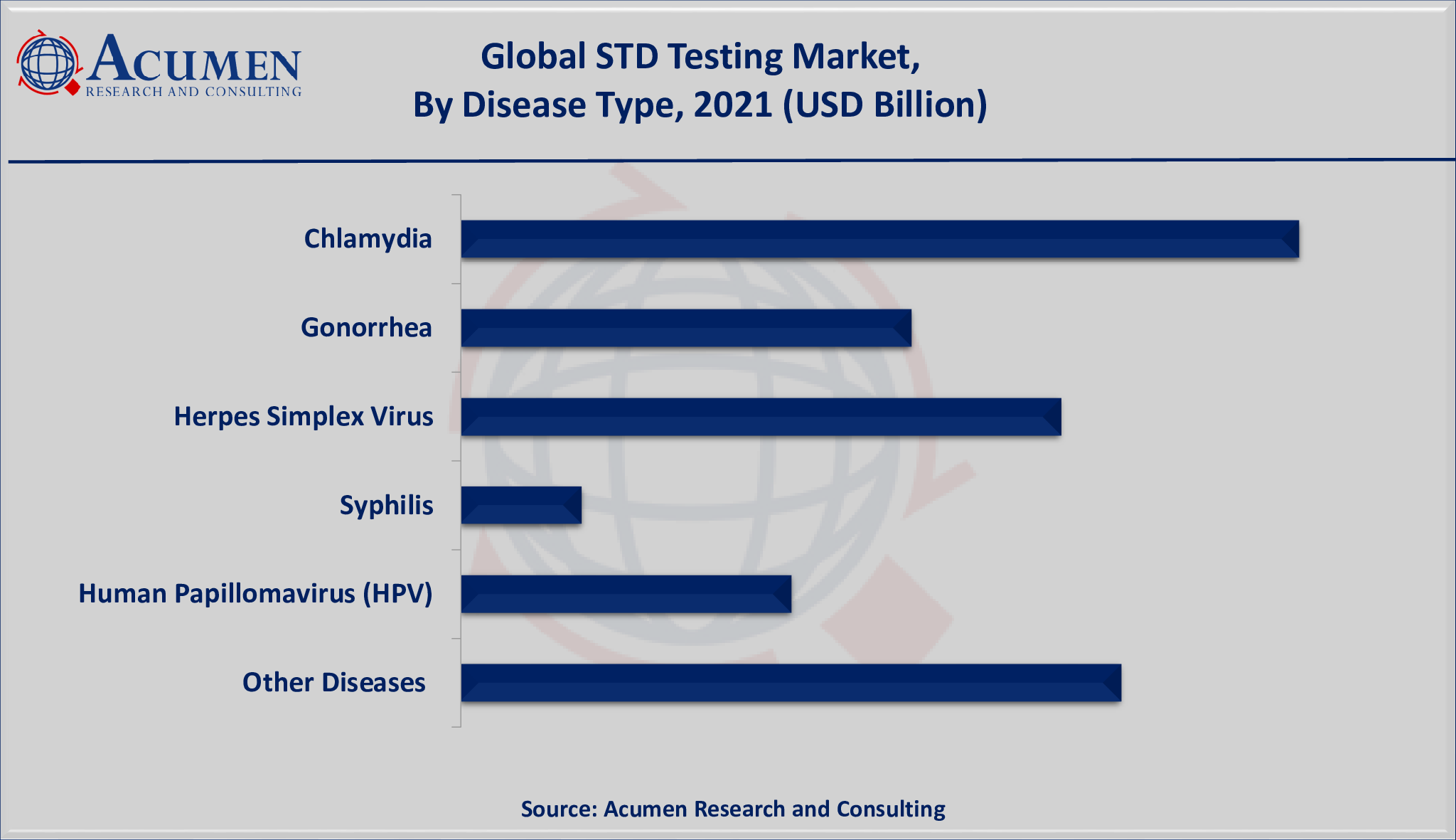 According to our STD testing market forecast, chlamydia STD Testing generated the maximum market share in 2021 and is expected to continue its trend during the forecast timeframe from 2022 to 2030. Chlamydia (Chlamydia trachomatis) is the most common sexually transmitted infection in the world. In 2019, the CDC received reports of 1,808,703 cases of Chlamydia trachomatis infection, making it the most common reportable condition in the United States. Adolescents and young adults have the highest rates of reported chlamydia. In 2019, nearly two-thirds (61%) of all reported chlamydia cases were in people aged 15 to 24.

Market by Location of Testing 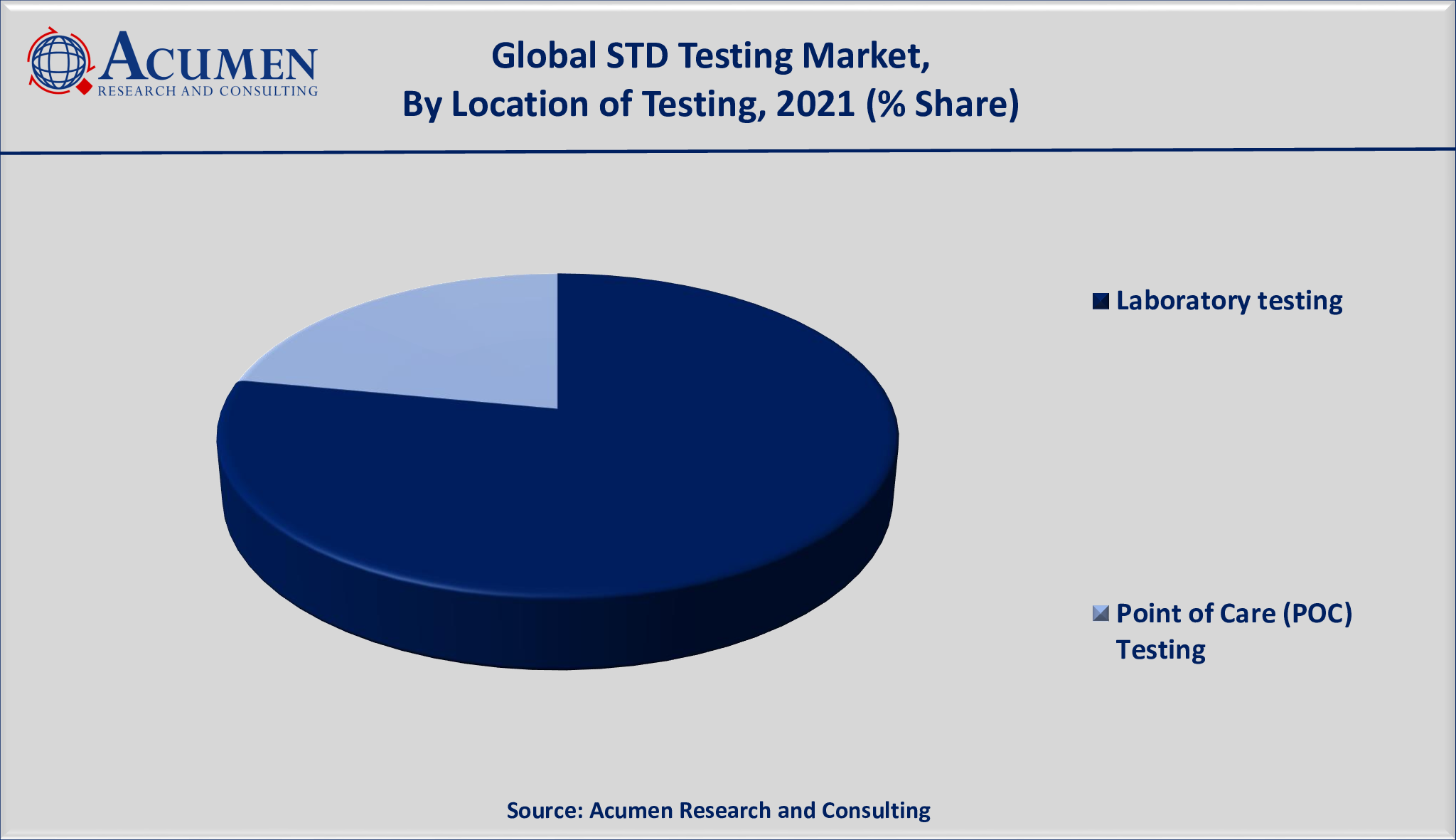 According to our STD testing industry analysis, laboratory testing took the lead in 2021 and is expected to continue to do so in the future because most diagnostic testing is done in labs. Furthermore, laboratory testing yields more precise results than point-of-care testing. However, due to the quick and easy testing in this environment, the point of care testing sub-segment is expected to grow at the fastest rate in the coming years.

North America is expected to hold a dominant position in the global market due to the presence of technologically advanced products, and the presence of FDA-approved STD testing devices in the region. Furthermore, the provision of insurance coverage policies and the emergence of novel POC testing concepts are some of the factors that are supporting the North America STD testing market.

How much was the estimated value of the global STD testing market in 2021?

The estimated value of global STD testing market in 2021 was accounted to be USD 95 Billion.

What will be the projected CAGR for global STD testing market during forecast period of 2022 to 2030?

Which region held the dominating position in the global STD testing market?

Asia-Pacific held the dominating STD testing during the analysis period of 2022 to 2030.

North America region exhibited fastest growing CAGR for STD testing during the analysis period of 2022 to 2030.

What are the current trends and dynamics in the global STD testing market?

By disease type segment, which sub-segment held the maximum share?