The Global Window Film Market Size accounted for USD 10,426 Million in 2021 and is estimated to achieve a market size of USD 16,827 Million by 2030 growing at a CAGR of 5.6% from 2022 to 2030. The increasing relevance of energy consumption is a key element driving the global window film market value. Furthermore, the worldwide window film market growth is predicted to increase significantly due to increasing product demand from end-use sectors such as automobile, residential & commercial construction, & marine. 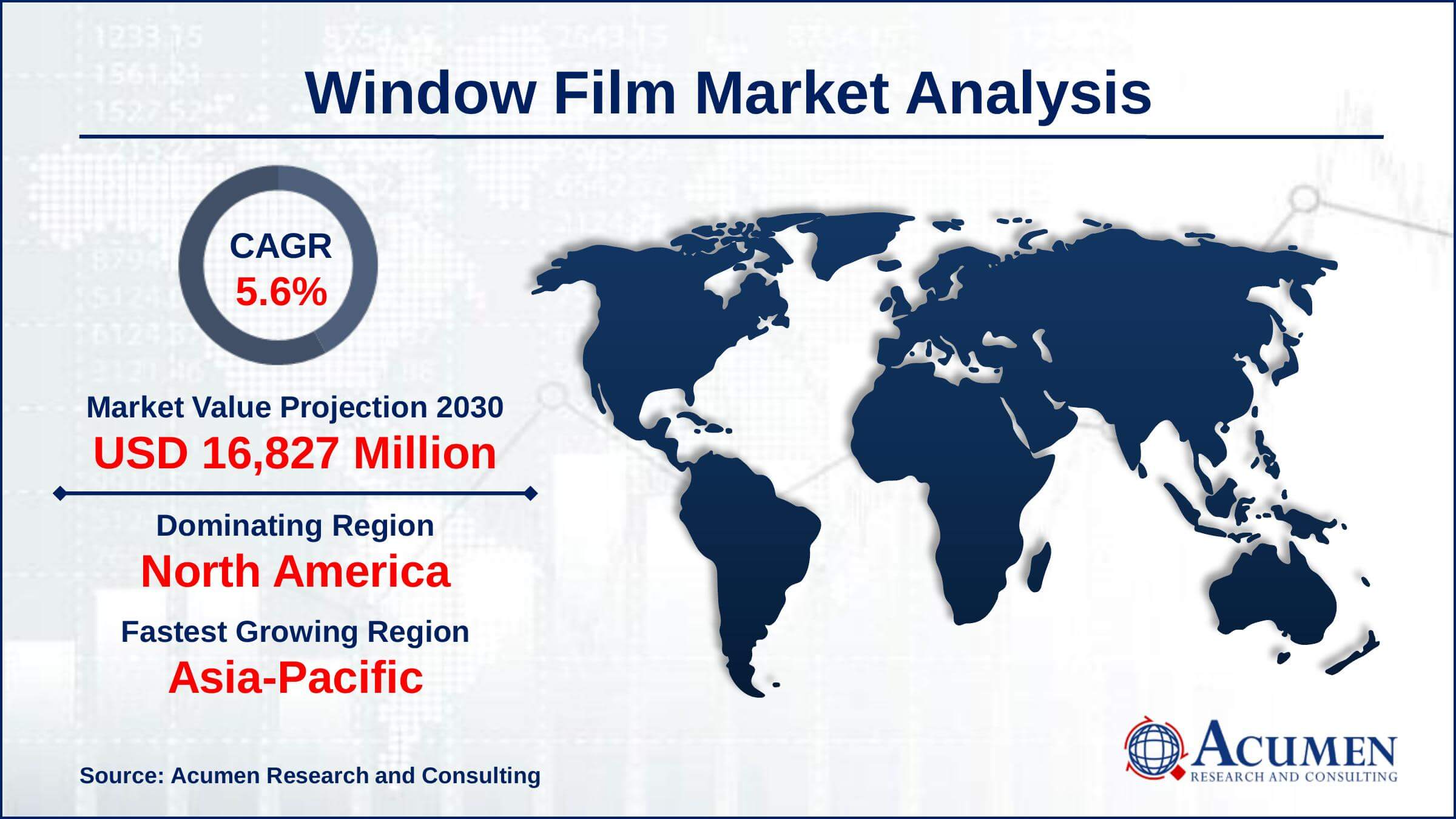 Window films are frequently employed to shield the interiors of structures and automobiles from Ultraviolet light and infrared radiation and to reduce noise. The grade and kind of components utilized, such as protecting releasing liners, sealants, scratch-resistant coatings, polyester films, colors, metals, composites, and UV inhibitors, determine the longevity and effectiveness of window films. 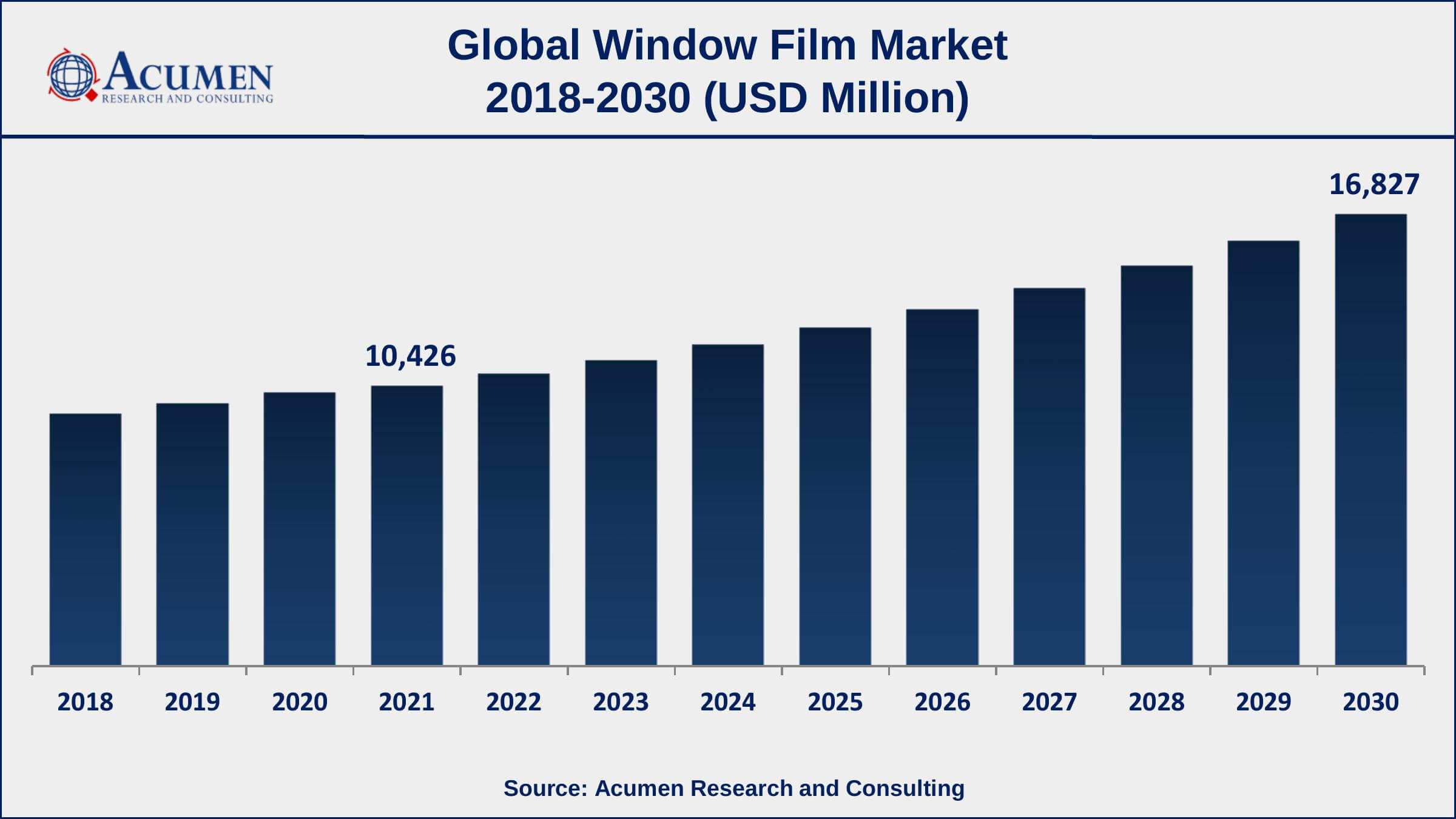 One of the major drivers in the market is expanding interest in automobiles. The utilization of different sorts of window films in automobiles is probably going to fuel the growth of the worldwide window film market. Interests in automobile fabricating are making the interest for window films, especially in APAC. Expanding extra cash and shopper mindfulness about the advantages of window films are boosting their applications in the automobile business. Developing offers for the traveler and business vehicles are forecasted to affect the growth of the worldwide market emphatically. Improving automobile deals is expected to be conspicuous in Europe and the Americas.

A recent trend in the market is requesting research facilities and business spaces. Expanding concerns in regards to clamor contamination and its effect on profitability at the workspace are driving the requirement for productive business spaces with commotion control glass windows. The utilization of such window films decreases commotion and gives a superior workplace. The ascent in various excitements focuses, shopping edifices, extravagant stays, and business spaces have added to the growth of the worldwide window films market.

The worldwide window film market segmentation is based on the products, application, and geography. 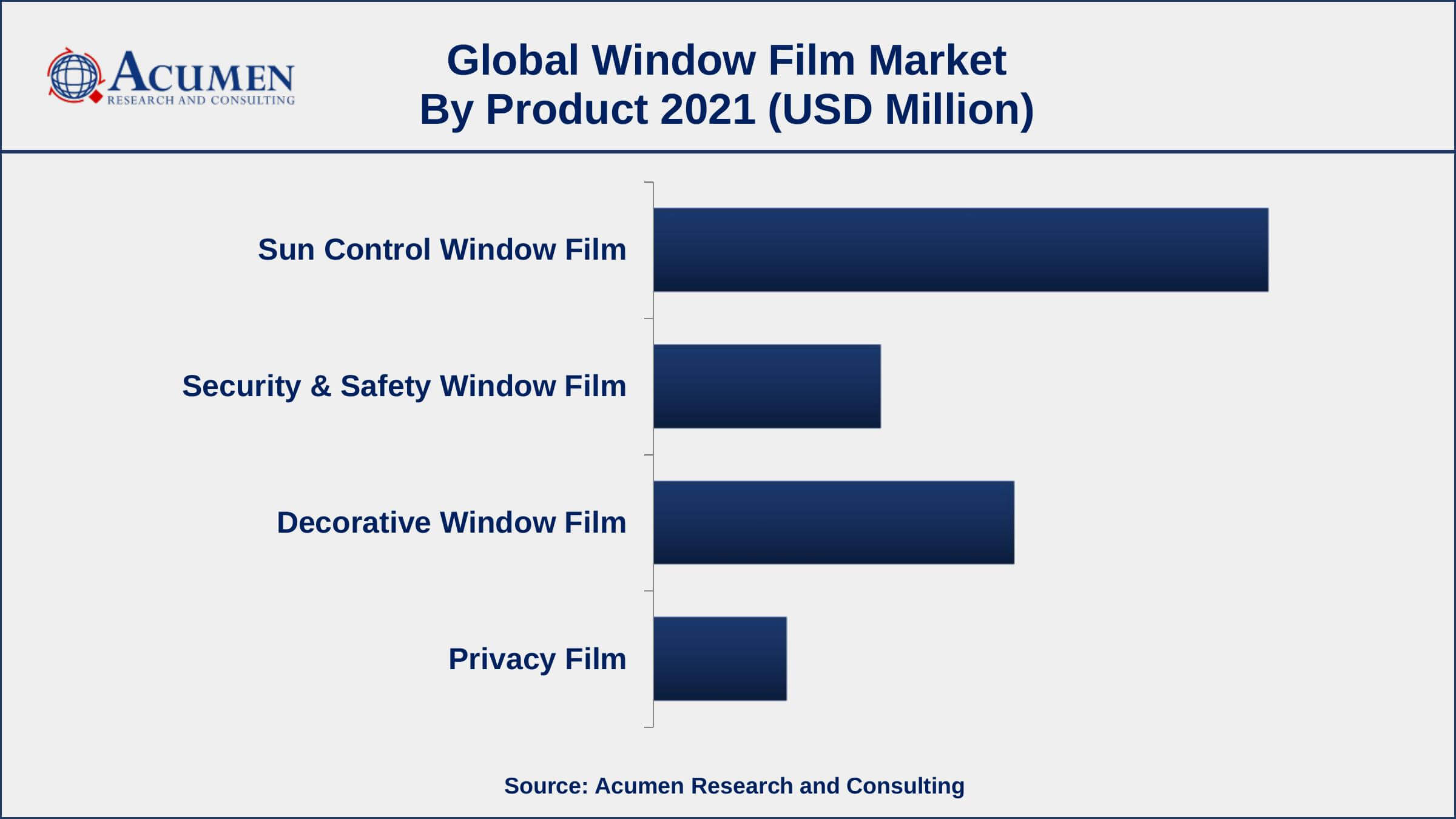 According to the window film industry analysis, the sun control product segment held the largest market share in 2021. Sun control window films are primarily used to safeguard the enclosure of buildings while also adding artistic appeal to buildings. The rising prevalence of skin illnesses is expected to drive the market for sun control in commercial and residential settings. Additionally, growing energy costs and the desire to reduce power usage are propelling the growth of sun control films in both commercial and residential settings. 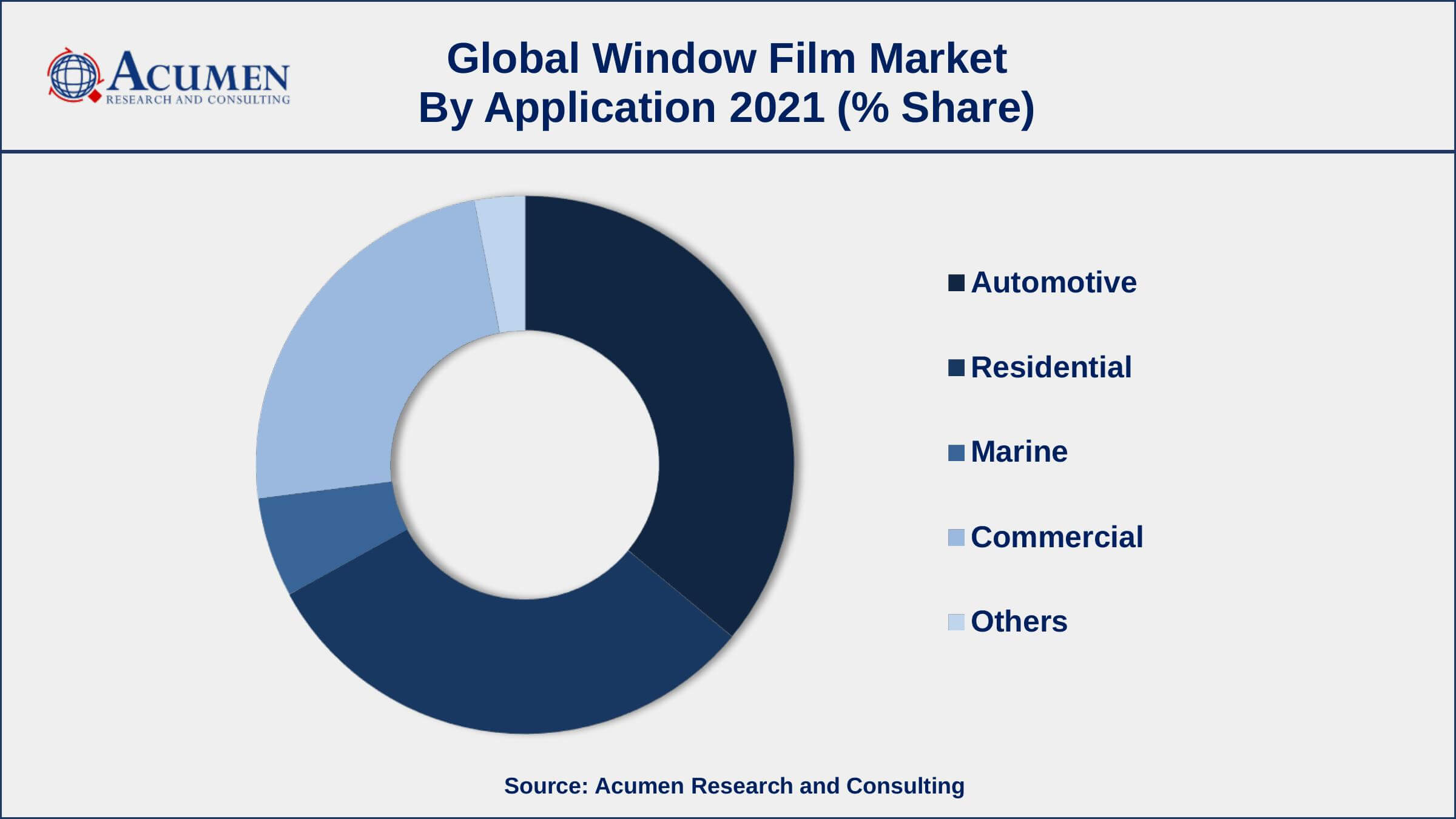 According to the window film market forecast, the automotive application segment dominate the market and expected to grow significantly over the forecasting years. Grwoing demand from the car business to drive the worldwide window films market. Window films are exceedingly utilized in the car business because of their expanded protection, exorbitant warmth resistivity, UV resistivity, and security purposes among others. Developing car creation principally in Asia-Pacific and European nations are projected to drive the market. The worldwide car creation expanded by 2.4% in 2017, with further growth expected in years to come. Such positive growth is expected to drive the market through the estimated time frame.

Geographically, the Asia-Pacific market is predicted to represent the largest geographical market in the global window films industry, as well as the fastest growth over the forecast period. Asia-Pacific has the biggest market for car creation and furthermore has the biggest number of ventures both in its private and infrastructural segments. China overwhelmed the Asia-Pacific market inferable from critical interests in its construction segment and the developing car generation in the nation.

In the Asia-Pacific, the construction of business buildings, for example, medical clinics, schools, universities, banks, workplaces, and private tasks have seen an expansion since the previous decade. India has been seeing quick improvement regarding its framework advancement, upheld by the present government. Steady government activities so as to improve the construction division in the locale are required to fuel the use of the item over the figure time frame.

What is the size of global window film market in 2021?

The estimated value of global window film market in 2021 was accounted to be USD 10,426 Million.

What is the CAGR of global window film market during forecast period of 2022 to 2030?

Which region held the dominating position in the global window film market?

North America held the dominating window film during the analysis period of 2022 to 2030.

Asia-Pacific region exhibited fastest growing CAGR for window film during the analysis period of 2022 to 2030.

What are the current trends and dynamics in the global window film market?

By products segment, which sub-segment held the maximum share?

Based on products, sun control window film segment is expected to hold the maximum share of the window film market.