Xylitol is a sugar alcohol, also known as a polyol, which is a type of carbohydrate. They are made from naturally occurring water-soluble substances found in a variety of fruits and vegetables. Moreover, the Food and Drug Administration has approved xylitol for use in food since 1963. It has a similar compound structure to sugar but contains fewer calories; whereas sugar has approximately 4 calories per gram, xylitol has only 2.4. It can be found in strawberries, mushrooms, raspberries, and cauliflower, among other fruits and vegetables. It can be found in a variety of fruits and vegetables, including strawberries, mushrooms, raspberries, and cauliflower. It's also found in other plants and agricultural materials, such as birch bark and corn husks, which are used to make commercially produced xylitol, which is used in gumdrops, sugar-free chewing gum, chewable multivitamins, hard candies, and pharmaceuticals.

The use of xylitol in nutritional supplement products such as gummies has been a major driving factor in the market's growth. Furthermore, the growing demand for xylitol in food and nutraceutical applications is considered to be a major driving force in the market over the forecast period. Due to the rising incidence rates of several chronic conditions such as diabetes and cardiovascular disease, high cholesterol, and obesity, there has been an increase in customer awareness about calorie consumption. This is a key factor driving the growth of the worldwide xylitol market. Furthermore, buyers are likely to pay more money on sugar substitutes rather than regular sugar, which is fueling global demand for xylitol. Besides that, substitutes such as mannitol and sorbitol are likely to have an impact on the market because they are the least expensive, which may limit the industry's outlook. 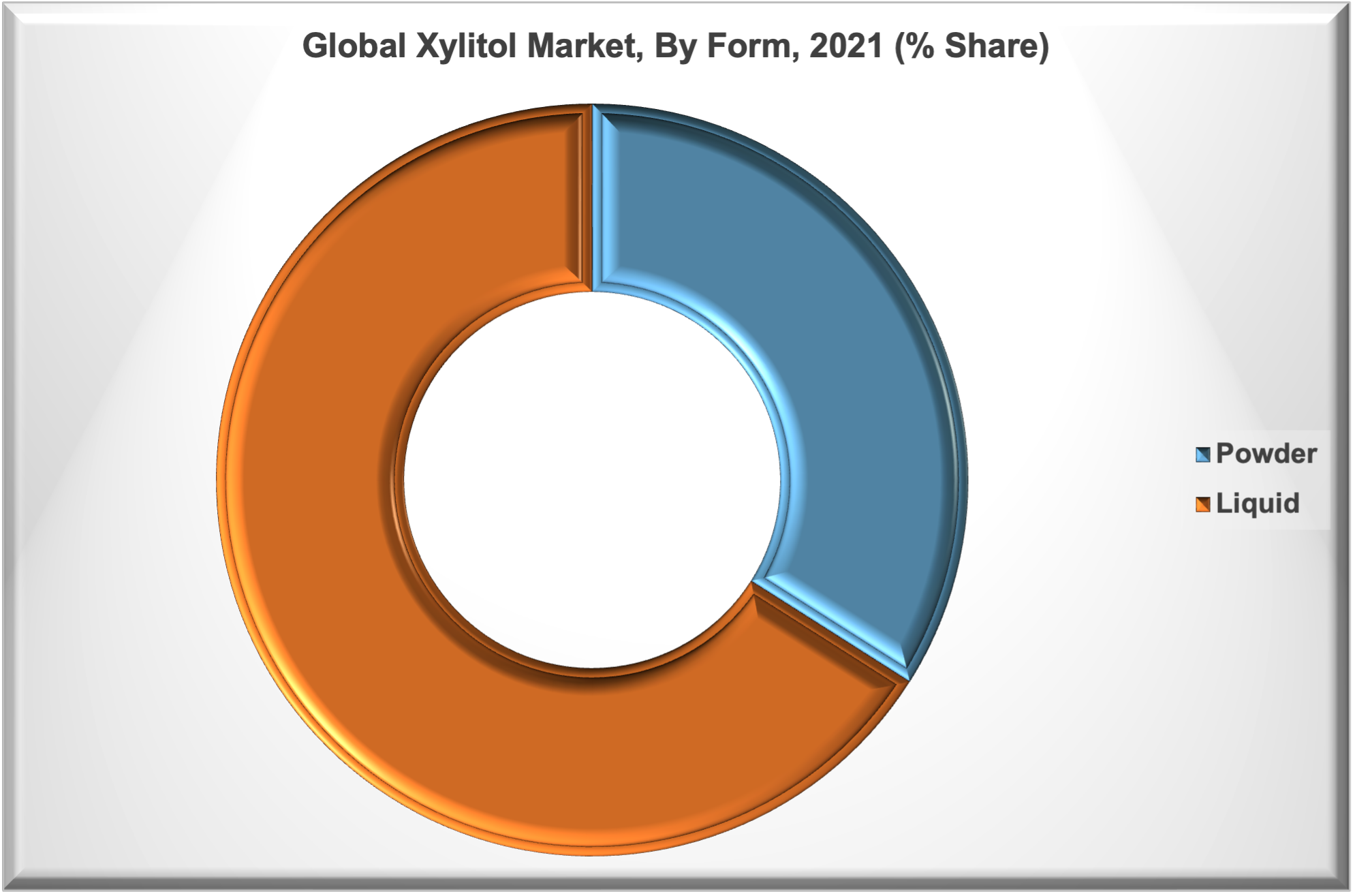 In terms of form, the powder segment will account for more than three-quarters of the xylitol market in 2021. The rising demand for the product in dry powder and crystal form is due to its effectiveness in a variety of applications as well as its ease of availability, handling, and storage. Moreover, for its durability, the powder form is primarily used in the production of chewing gums supplements.

On the other hand, the liquid form segment will capture the fastest-growing segment during the forecasting years. The liquid xylitol is a natural sugar found in fruits, vegetables, milk, and honey that serves as the body's primary source of energy and benefits the nerves and muscles, kidneys, heart muscle, and brain. Furthermore, it contains oxygen, hydrogen, and carbon atoms, as well as a large number of hydroxyl groups. They are simple to combine with proteins and lipids. These liquid xylitol's are useful for short-term power storage and act as building elements in cells like cellulose. Moreover, liquid xylitol helps to reduce total belly and body fat, leaving customers with slim waistlines.

Based on the applications, the personal care segment is projected to expand at the fastest CAGR over the forecasted time periods. Xylitol is a tooth-friendly alternative to conventional sweeteners because it can help prevent dental cavities. Furthermore, xylitol reduces the occurrence of dental caries by enhancing saliva production and pH13 and decreasing the number of fermentable carbohydrates and periodontopathic microbes, xerostomia, plaque levels, gingival inflammation, and tooth erosion. Sugar consumption has recently increased, particularly among children and teens, to 120 kilograms per person per year, or 20 tablespoons of sugar per day. This excessive consumption of sugar has resulted in negative health concerns such as diabetes mellitus and dental caries, as well as increased public and medical and dental professional awareness and understanding of substituting sugar with no sugar sweeteners. As a result, sugar substitutes are effective in weight loss and other health problems.

In terms of downstream potential applications, xylaric acid will dominate the market in 2021. Conventionally, nitric acid is used as the oxidant in the production of xylaric acid, resulting in considerable amounts of toxic byproducts such as Nitrous oxide and NO. Growing demands from numerous industries such as textiles, automobiles, plastics, and healthcare should propel the xylaric acid industry forward.

In 2021, Asia-Pacific will hold the largest market share globally. The Asia-Pacific market is being driven by the increased penetration of chewing gum, confectionaries, and oral healthcare manufacturers, as well as changes in customer demand in emerging economies. Moreover, Growing health concerns, such as obesity and dental issues, have fueled the demand for sugar-free ingredients and artificial sweeteners. This has greatly increased the consumption of xylitol as a sweetener in Asia-Pacific. Besides that, China is the region's largest manufacturer of xylitol, while India, China, and Southeast Asia are among the region's leading consumers.

How much was the estimated value of the global xylitol market in 2021?

The estimated value of global xylitol market in 2021 was accounted to be US$915Mn.

What will be the projected CAGR for global xylitol market during forecast period of 2022 to 2030?

Which region held the dominating position in the global xylitol market?

What are the current trends and dynamics in the global xylitol market?

Growing demand from the dental care industry, increasing prevalence of diabetes patients globally, as well as increasingly health-conscious population, are the prominent factors that fuel the growth of global xylitol market

By segment Form, which sub-segment held the maximum share?

Based on Form, Powder segment held the maximum share for xylitol market in 2021