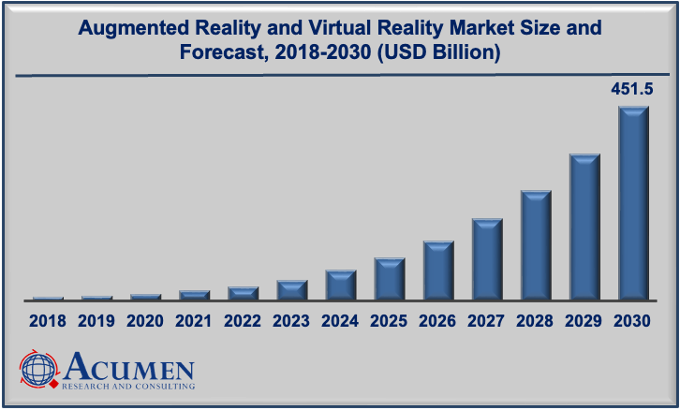 A synthetic environment created with the aid of artificial intelligence is called virtual reality. It is an imitation or replica of an event or setting from real life that is produced by a computer. Because of its ability to communicate with users, it enhances current reality and gives it greater meaning. The addition of virtual elements like graphics and digital photographs through augmented reality, however, enhances the experiences. The market for ARVR is also anticipated to expand in the years to come due to the rising demand for goods based on augmented reality and virtual reality (ARVR) technology in numerous industries.

Head-up displays (HUDs) are largely used for image augmentation and are currently used in the aerospace and defence sector as well as the automotive industry for training purposes. The market for HUDs that support augmented reality is still in its infancy but is anticipated to become commercially viable soon. The primary purpose of the augmented reality head-up displays in cars and aeroplanes is intended to be navigation. The display of information on the windscreens, such as a route and speed, as well as any additional vital details in the driver's line of sight, would help drivers drive safely. The market would grow more quickly if head-up displays were used in industries like aerospace and defence and automobiles.

New smartphone applications have been unveiled after Pokémon Go's first release in 2016. Retailers have created AR apps to help users make online purchases, while firms like Snapchat and Facebook have developed interesting methods to deliver AR experiences on social media platforms. By putting up their smartphone in front of a room or space, users of the Ikea app, for instance, may see furnishings in their own homes. This lessens some of the anxiety that customers have when purchasing large products like furniture online. It offers an additional convenience.

Since a few years ago, smartphones and headsets have been the most popular method of delivering a VR experience. The easiest way for consumers to start using VR has been through this. Compared to the market for augmented reality today, virtual reality is far more developed. To create an immersive VR experience, the necessary hardware platforms and software tools are now available. Virtual reality experiences are rapidly expanding their applications in our lives thanks to the availability of increasingly sophisticated systems like the Oculus Rift and 360-degree cameras.

From real estate to tourism, virtual reality is demonstrating some useful business use cases. On a recent trip to Israel, I saw how the Jerusalem Visitor's Bureau immersed travelers in the city's 5,000-year-old appearance utilizing virtual reality. These cutting-edge VR experiences are emerging in a variety of global sectors.

Due to its limits, lack of standards, and higher price, augmented reality technology is still in its infancy compared to virtual reality, but it is already being used in sectors including manufacturing, healthcare, and logistics. Experiences with augmented reality are often provided through headsets like Meta, ODG, Vuzix, and HoloLens, and early indications indicate that the technology is about to revolutionize business and industrial markets. Before these technologies are widely used, however, there is more work to be done.