Artificial intelligence has a wide range of applications in the automotive industry. AI is currently being used in the automotive industry, in areas such as design, supply chain, production, and post-production. Furthermore, AI is being used in 'driving assistance' and 'driver risk assessment' systems, which is revolutionizing the transportation industry. Artificial intelligence is also revolutionizing aftermarket services such as predictive maintenance and insurance. Experts in the automobile industry have been debating four significant disruptive trends for the past few years: autonomous driving, car networking with data sensors, electrification, and shared mobility, which is referred to as ACES. The automotive market is predicted to develop as a result of these trends, and AI is a major technology in this. 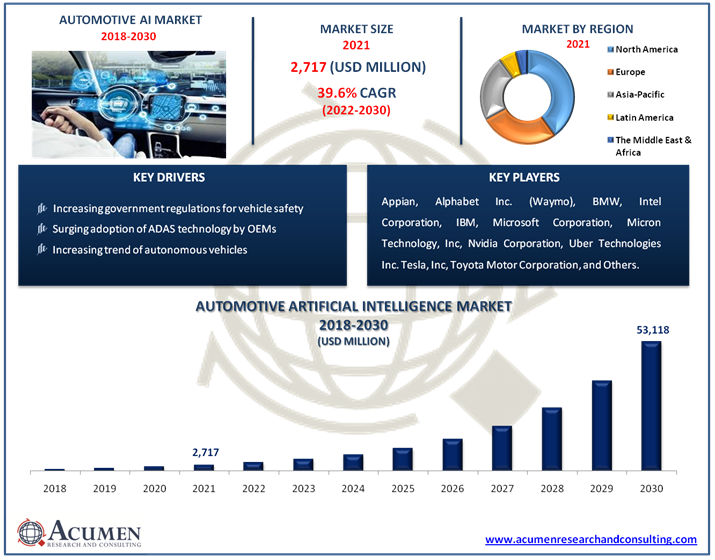 One of the primary reasons for the impressive growth of the global automotive artificial intelligence market is that AI has helped improve vehicle and road safety concerns. Many modern vehicles include driver assistance systems, which help to save lives and avoid injuries on roads. Some driver assistance technologies are designed to alert the driver if they are about to crash, while others are designed to help avoid crashing. Thus, the advancement of vehicle technology, such as driver assistance systems and automated driving systems, aims to provide even more safety benefits.

Another major factor that is driving the market growth is the increasing trend of autonomous vehicles. Features such as automatic emergency braking (AEB) and lane departure warning (LDW) have been legislated by governments all over the world, opening the path for new technology and self-driving cars. Developing a favorable regulatory environment, government financing, and investment in digital infrastructure are projected to play a major role in favorably affecting the market growth in the coming years. With the support of new technologies, several major players are aiming to improve the experience of using autonomous vehicles. For example, in 2019, Volkswagen, the world's largest automaker, announced a partnership with Ford to invest in AI vendor Argo AI. The purpose of the alliance was to bring autonomous car technology to the United States and Europe.

However, the growing overall cost of the vehicles and increasing concerns such as cybercrime could hamper the market from growing. According to a report from the United Nations, Europol, and cybersecurity company Trend Micro, cybercriminals might use developing technologies such as artificial intelligence and machine learning to aid in attacks on self-driving cars, drones, and Internet of Things-connected vehicles.

The global automotive artificial intelligence market is categorized based on offering, process, technology, application, and geography.

Based on our analysis, the hardware segment conquered a significant market share in 2021. Businesses can smoothly integrate AI in automotive, cope with business difficulties, and enforce digital transformation thanks to the growth of efficient algorithms, high-performance computer hardware, and data-powered sensors. On the other hand, the software segment is anticipated to attain a substantial growth rate throughout the forecast period 2022 – 2030. Alphabet Inc., Microsoft Corporation, IBM Corporation, and Intel Corporation are among the leaders in AI software development for the automotive industry.

Data mining in the automobile industry will be the most important and fastest-growing technology in the business. When it comes to the processes and data mining in automotive industry goods with vehicle learning and optimization to be utilized in the automotive industry of the future, artificial intelligence, data science, and machine learning are the benefits and important technologies.

Among them, the deep learning segment is likely to register a significant growth rate in the coming years. One of the primary technologies that enable self-driving is deep learning. It's a versatile instrument capable of resolving practically any issue. Self-driving cars are more powerful than ever before, thanks to today's high-performance graphics cards, computers, and massive volumes of data. It will reduce traffic congestion and improve road safety if it becomes widely adopted. Autonomous decision-making systems are what self-driving automobiles are. They can process data streams from a variety of sensors, including cameras, RADAR, GPS, LiDAR, and inertia sensors. This information is then modelled using deep learning algorithms, which make decisions based on the car's current environment.

Among all of them, the human-machine interface segment conquered the market with noteworthy shares in 2021. In the last few years, automotive HMI has advanced dramatically, with disruptive technologies such as voice recognition and gesture detection being deployed in a variety of devices. This is a burgeoning market where cutting-edge AI technology is being implemented in next premium models.

The increasing adoption of electric and autonomous vehicles in the North America region, fuels the regional market growth

Geographically, the North America region consumed the majority of the share in 2021. This is due to the early adoption of technologies such as AI, machine learning, deep learning, automation, etc. In addition, the increasing trend of self-driving cars and electric vehicles and rising implementation of drives assist technologies and increased per capita income in the region are some of the aspects that keep the North America region at the top. However, the Asia-Pacific region is likely to witness the fastest CAGR during the forecast period 2022 – 2030.

How much was the estimated value of the Global Automotive Artificial Intelligence (AI) Market in 2021 and projection by 2030?

What will be the projected CAGR for Global Automotive Artificial Intelligence Market during forecast period of 2022 to 2030?

The projected CAGR of Global Automotive Artificial Intelligence Market during the analysis period of 2022 to 2030 is 39.6%

Which region held the dominating position in the global automotive artificial intelligence market?

North America held the dominating share for automotive artificial intelligence during the analysis period of 2022 to 2030.

Asia-Pacific region exhibited fastest growing CAGR for automotive artificial intelligence during the analysis period of 2022 to 2030.

What are the current trends and dynamics in the global automotive artificial intelligence market?

By segment offering, which sub-segment held the maximum share?

Based on offering, hardware segment held the maximum share for automotive artificial intelligence market in 2021.