Basic chemicals are manufactured in large amounts and are important elements in products used by industry and the general public. These products are used to process raw materials in numerous sectors. Chemical raw materials originating from oil (petrochemicals), basic inorganic, and chemical process intermediates are among them. There are additional goods that function as additives and solvents in many mixes that fall under the category of basic chemicals. 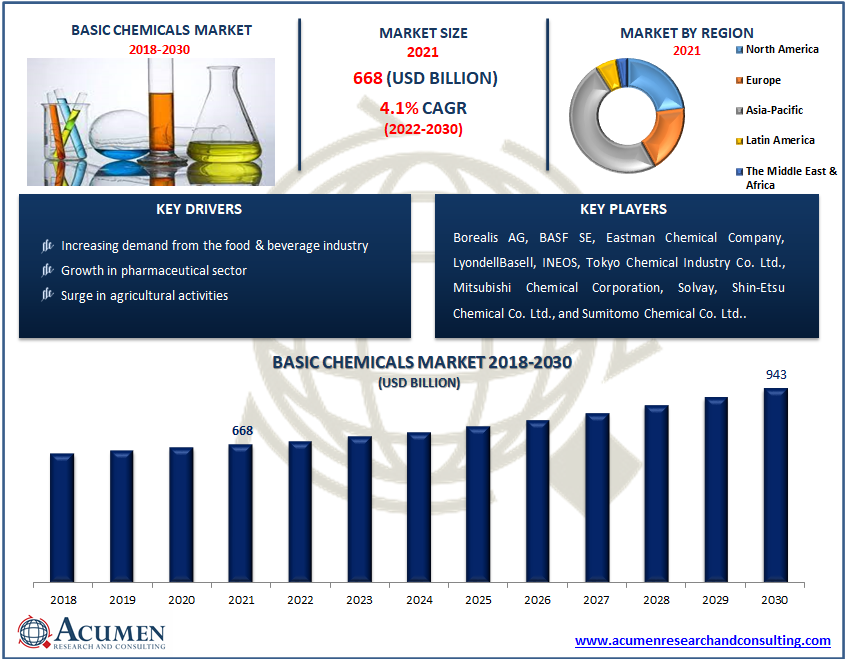 The growing adoption of basic chemicals in the food & beverage industry is one of the leading factors that drive the global basic chemicals market. Several chemicals are employed as direct food additives to improve the taste, aroma, and appearance of food. These chemicals can also work as preservatives, reducing the action of bacteria and so preventing spoiling. Chemical goods are also used in the food business to make packaging that will come into touch with food. Foils, containers, boxes, cutlery, and a variety of other items are among them.

The rapid growth of the pharmaceutical sector is prompting the key players in the industry to boost the production of organic and inorganic basic chemicals. Chlorine is a basic chemical raw material used in pharmacy. It is employed as a steppingstone in the production of pharmaceuticals. It's also possible that it's incorporated into their molecules. Chlorine can be used to make a number of various types of medications.

Some of the factors that are limiting the growth of the market are health hazards associated with the basic chemicals and strict regulatory guidelines for the usage of basic chemicals. Chemical and hazardous compounds can cause a variety of health problems such as irritation, sensitization, and carcinogenicity, and physical problems such as flammability, corrosion, and explosibility. The Hazard Communication Standard (HCS) recognized by OSHA is proposed to guarantee that labors and workers are informed about toxic chemical substance threats in the workplace, as well as preventative measures.

Moreover, the surge in agricultural activities and growing private and public significant investments in the chemical industry are some of the global basic chemicals market trends that are expected to create numerous growth opportunities for the market in the coming years.

The global basic chemicals market is segmented based on type, end-use industry, and geography.

Based on types, the organic segment accounted for the majority of the share 2021 and is likely to do the same throughout the forecasted years 2022 – 2030. Organic compounds are either compounds, such as ethene, benzene propene, and butadiene, and how they are used to make pharmaceuticals and plastics, or compounds made from these building blocks, such as ethanoic acid, ethane-1,2-diol, and methanol, which are useful in and of themselves or are used to make other useful compounds. However, calcium carbonate, hydrogen chloride, chlorine, sodium hydroxide, sodium carbonate, nitric acid, and sulphuric acid are examples of inorganic chemicals that are used to generate other compounds such as polymers, fertilizers, soaps and surfactants, and construction materials.

Based on end-use industry, the chemical industry generated the largest revenue in 2021. The rising demand for a diverse range of consumer goods has boosted the growth of the chemical industries in both established and emerging economies, where basic chemicals are utilized as a raw material or an intermediate in the production of a variety of products. Furthermore, the food & beverage industry, as well as pharmaceutical industries, are also leading the market due to the increasing adoption of basic chemicals in their production procedures.

Based on regional analysis, the Asia-Pacific region dominated the global basic chemicals market owing to the presence of huge number of chemicals industries. The significant presence of petrol chemical manufacturers in India and China is the reason for this supremacy in the basic chemicals market. Furthermore, the demand Asia-Pacific basic chemicals market is expected to be driven by factors such as increased investment and severe competition. North America is also expected to hold a significant market share in the coming years due to the expansion in the transportation sector, which includes the automobile, aircraft, and maritime industries.

During the COVID-19 Scenario, BASF SE, Solvay, and others saw a drop in sales for their chemical segments. Solvay, for example, saw a 16% drop in net sales in 2020 compared to 2019, attributable to lower net sales in the materials, chemicals, and solutions categories.

How much was the estimated value of the Global Basic Chemicals Market in 2021 and projection by 2030?

What will be the projected CAGR for Global Basic Chemicals Market during forecast period of 2022 to 2030?

The projected CAGR of Global Basic Chemicals Market during the analysis period of 2022 to 2030 is 4.1%

Which region held the dominating position in the global basic chemicals market?

Asia-Pacific held the dominating share for basic chemicals during the analysis period of 2022 to 2030.

Asia-Pacific region exhibited fastest growing CAGR for basic chemicals during the analysis period of 2022 to 2030.

What are the current trends and dynamics in the global basic chemicals market?

Based on type, organic segment held the maximum share for basic chemicals market in 2021.