Biochar is generally like charcoal, which is utilized to build the richness of soil, and aids in expanding the horticultural efficiency, alongside giving security against soil borne ailments. Biochar is developed through the procedure of pyrolysis and carbonization. During the biomass pyrolysis process, biochar is produced as a by-product, and is proficient in enhancing richness of soil, while giving normal carbon sequestration. Biochar helps in holding the carbon in soil, and furthermore goes about as a soil enhancer. Biochar is regularly sold in type of ease biochar compost buildings and little measured sacks, because of its high cost in the market. Biochar mixes are generally used in gardens, agriculture farms, and household application.

The global biochar market is driven due to increase in population which creates the need for improved soil fertilization to enhance crop yield. In addition, government initiatives to support the usage of biochar and stringent environment regulations, and waste management potential are some of the factors responsible for driving the growth of this market. Owing to the high cost and lack of awareness and labor barriers, the growth of biochar market is restricted to some extent. Contribution of biochar to low carbon food chain and land constraint and degrading soil quality are some of the factors which are subjected to prove potential opportunities for biochar market.

The global biochar market segmentation is based on the application, feedstock, technology, manufacturing process, and geographical region. 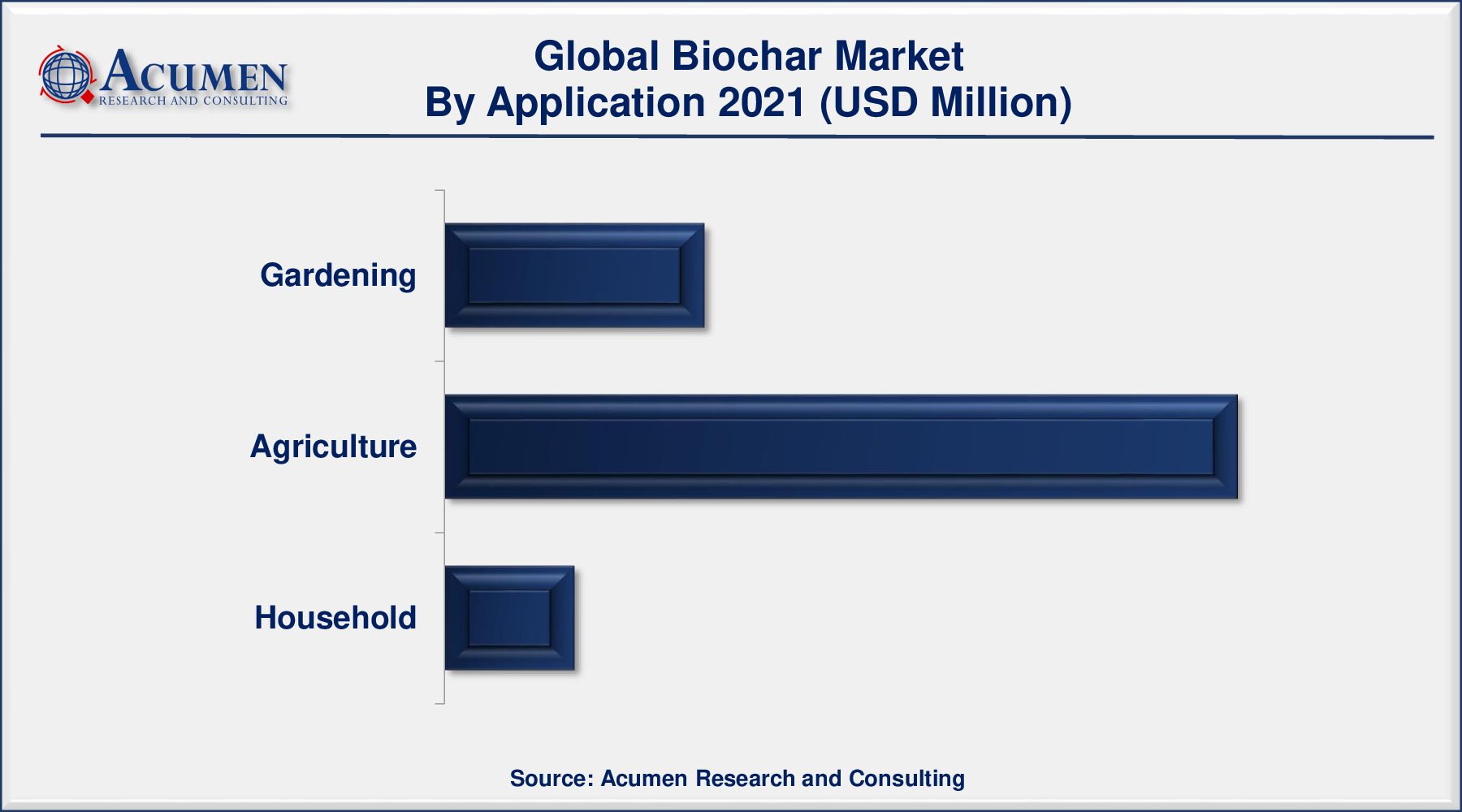 Based on the application, the agriculture segment is estimated to hold the largest market share in 2021. This expansion is due to the use of biochar in agricultural systems, which is one potential alternative for increasing the natural processes of sequestering carbon in the ground, reducing farm waste, as well as improving soil quality. Biochar has the ability to boost traditional agricultural output while minimizing emissions of greenhouse gases from cultivated fields. 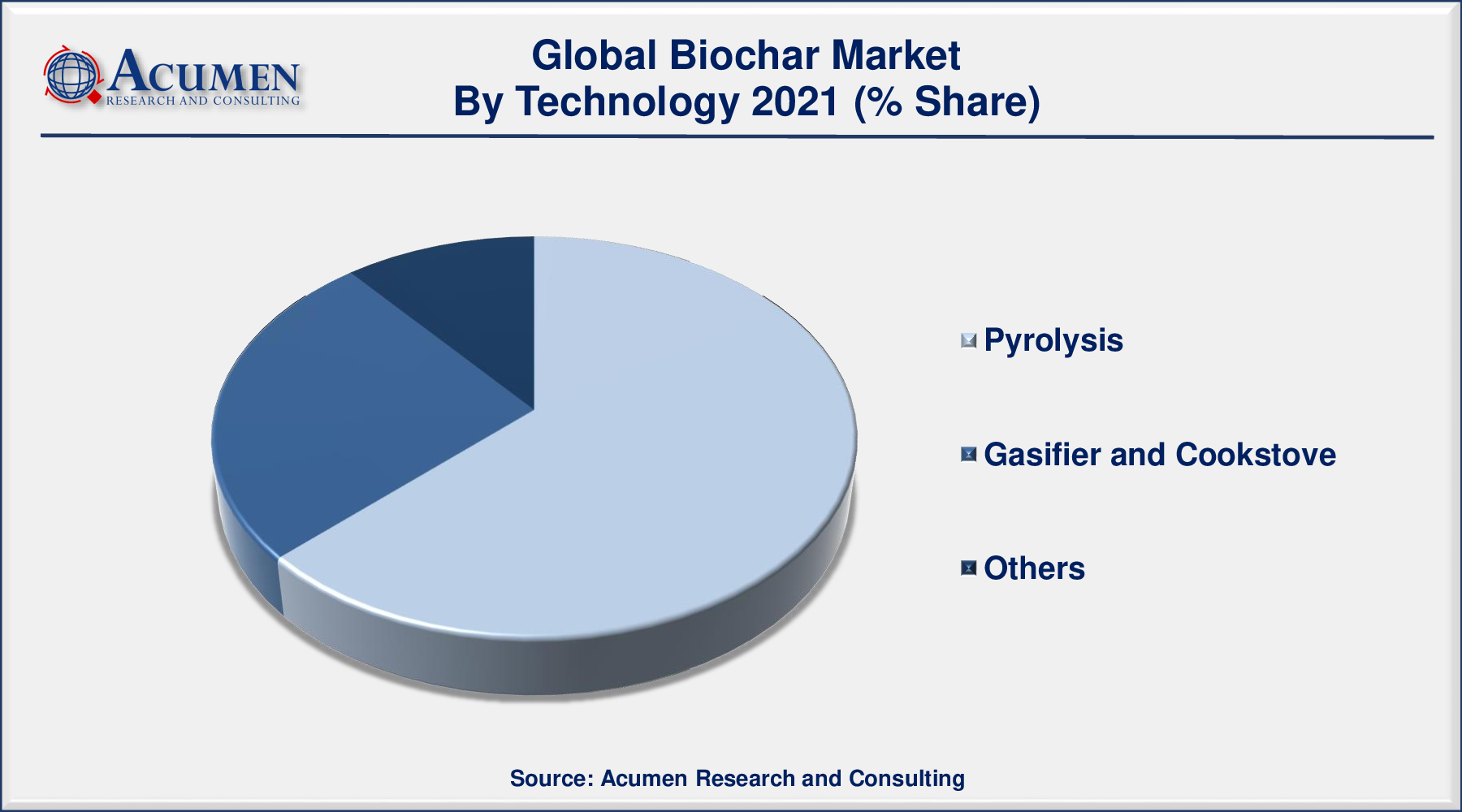 In terms of technology, the pyrolysis segment is expected to increase greatly within the coming years. This expansion is likely to accelerate due to benefits such as improved energy conservation and industrial feasibility. Aside from just being simple and economical, the method reduces instances of trash disposal, water contamination, and emissions of greenhouse gases.

According to the biochar market forecast, the gasification segment is expected to develop in the approaching years. Gasification is a prevalent method for generating syngas from various solid fuel supplies. Furthermore, biochar produced while gasification is regarded as a waste and also has various essential applications, including dye elimination from wastewater, carbon sequestration, chemical adsorption, and soil conditioner. Gasification is a thermochemical method that converts biomass to a fuel source while producing charcoal as a byproduct.

North America was the significant market for biochar in 2021 in terms of revenue and volume, and accounted for more than one forth share in both. This region is expected to maintain its dominance throughout the forecast period majorly attributed by the use of biochar in gardening application in North America. Gardening segment held the highest share among all applications of biochar in North America and accounted for around 74% revenue of total market in 2021. However, agriculture segment is expected to anticipate fastest growth in terms of revenue and volume till 2030 because of the increased demand for agricultural products, stringent environmental regulations, and increasing concern towards global warming. Also, in terms of volume North America is subjected to show strong dominance over the forecast period.

How much was the global biochar market size in 2021?

The global biochar market size in 2021 was accounted to be USD 168 Million.

What will be the projected CAGR for global biochar market during forecast period of 2022 to 2030?

Which region held the dominating position in the global biochar market?

Asia-Pacific held the dominating share for biochar during the analysis period of 2022 to 2030.

North America region exhibited fastest growing CAGR for biochar during the analysis period of 2022 to 2030.

What are the current trends and dynamics in the global biochar market?

Enhancement in crop yield by improving soil fertility and growing demand for biochar in energy production are the prominent factors that fuel the growth of global biochar market.

By segment application, which sub-segment held the maximum share?

Based on application, agriculture segment hold the maximum share for biochar market in 2021.