The Global Body Armor Market Size accounted for USD 2,391 Million in 2021 and is estimated to achieve a market size of USD 4,135 Million by 2030 growing at a CAGR of 6.5% from 2022 to 2030. Technological improvements and the launch of innovative goods such as customizable tactical outerwear are driving the body armor market growth. Furthermore, the increased number of terrorist assaults in public locations is predicted to boost the body armor market value in the coming years. 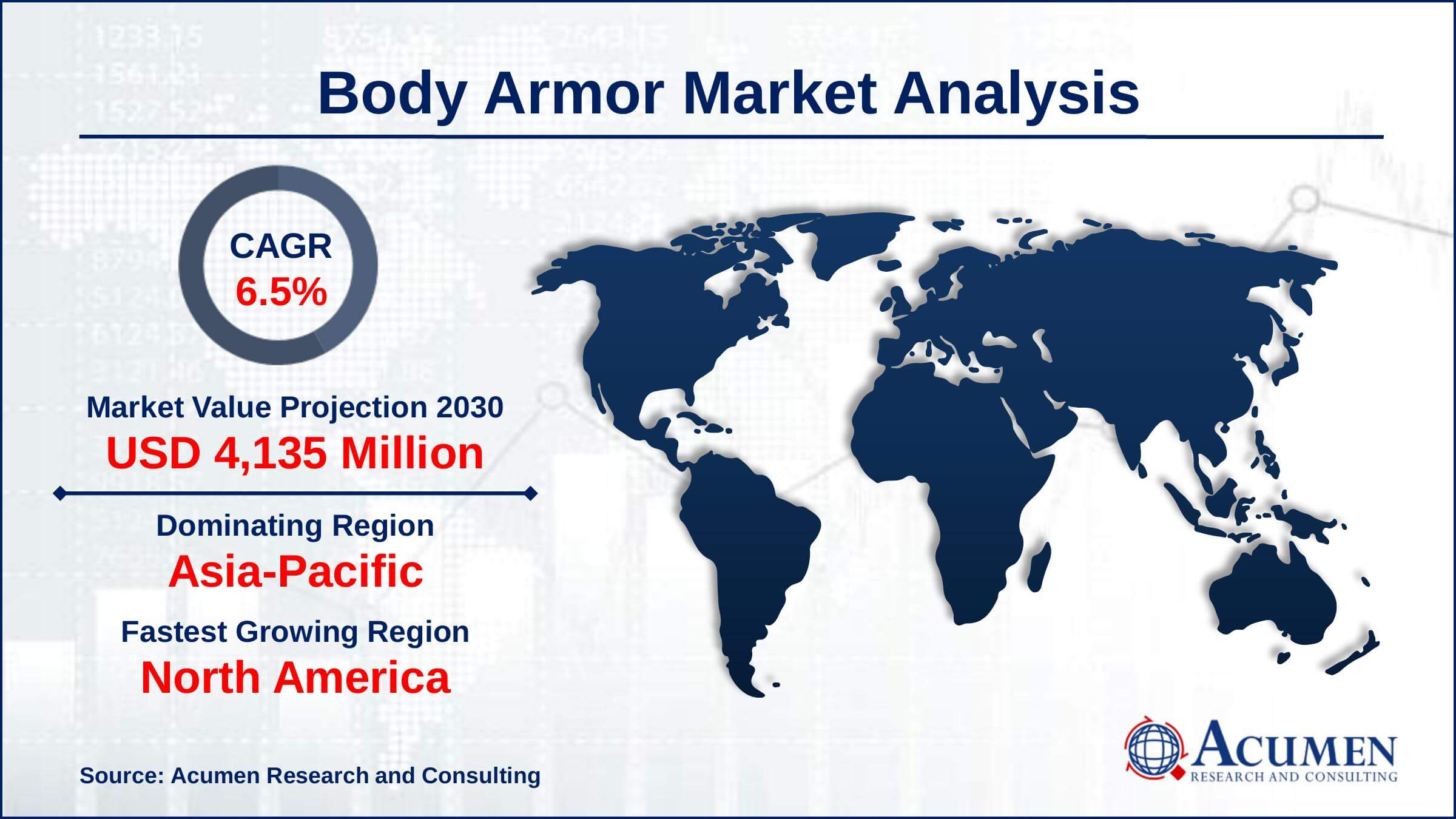 Body armor is majorly used to protect the human body from any kind of attack. It is simply a cloth that is used to bounce back or absorb attacks from gunfire. Body armor was generally used by soldiers, however in recent times it is also provided to police, and security guards in order to provide protection against any kind of attack. The standards for body armor are set by the National Institute of Justice (NIJ) and the Home Office Scientific Development Branch (HOSDB). 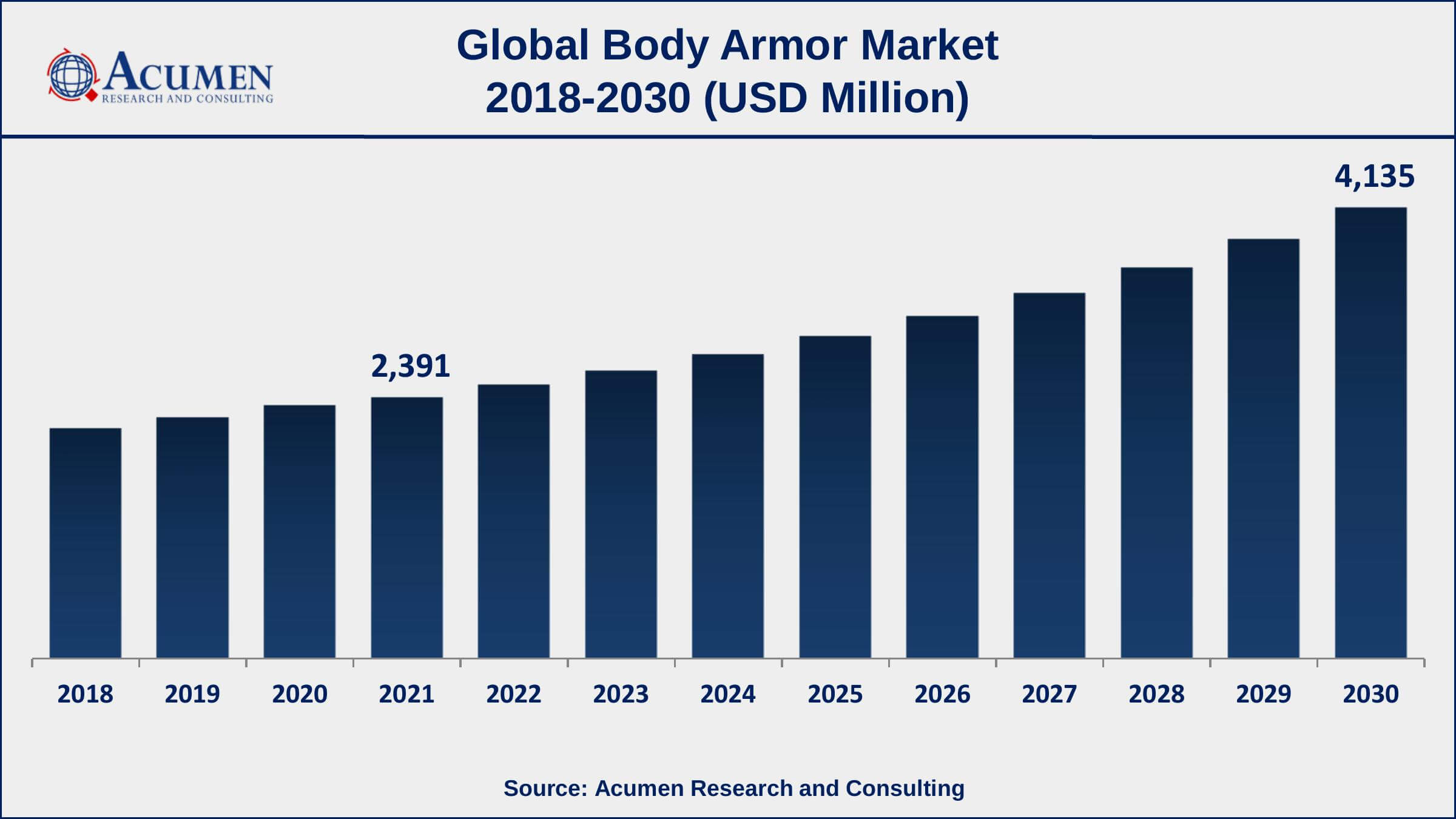 Increased focus on the safety of soldiers in order to ensure their longer survival is the major driving factor for the global body armor market. Moreover, the unavailability of ballistic defense armor and the upsurge in an unpredictable war situation in countries, such as India, Pakistan, South Korea, China, and Iraq also support the growth of the body armor market. In addition, the technological advancement resulting in the introduction of new products such as military modular tactical vests also boosts the demand for body armor globally. However, the reduced spending on military protection products by countries such as the U.S. and the UK due to the effects of recession hampers the growth of body armor.

Moreover, the growing focus on the reduction of body armor weight has resulted in the degradation of its quality, thereby declining the sale of body armor products in many countries. Nevertheless, the ongoing research for the development of body armor through nanomaterials offers huge growth opportunities for the market during the forecast period.

The worldwide body armor market segmentation is based on the level, application, material, product type, style, and geography.

According to the body armor industry analysis, the level III segment is capturing the highest market share in 2021. Level III jackets are lightweight, highly flexible, easier to conceal under clothes, and capable of defeating a broader range of projectiles. They also offer more blunt trauma resistance than IIA. The level III product is extensively utilized in protective armor and is suited for government employees, officials, or even civilians. 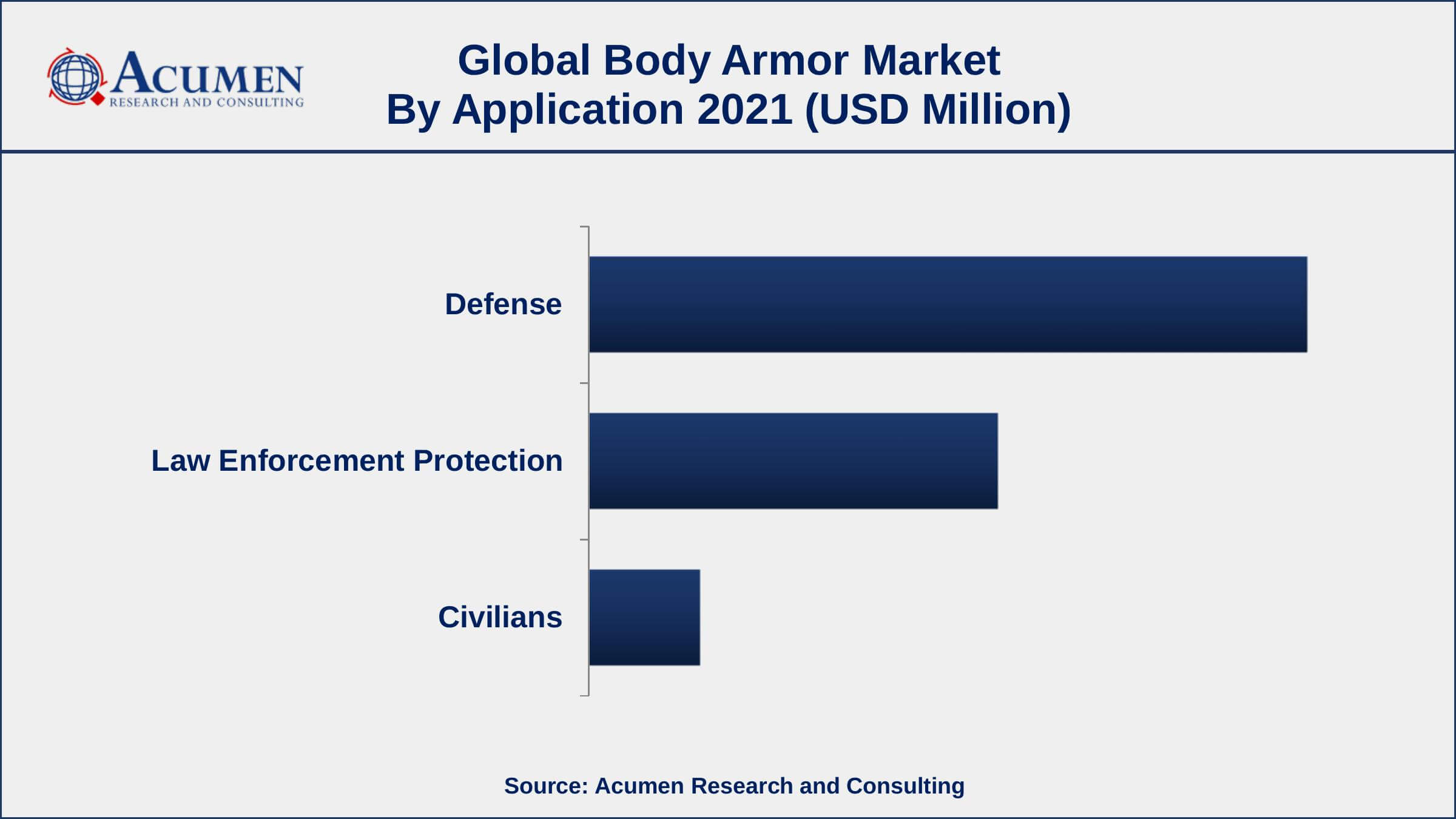 In terms of application, the defense segment is projected to lead the body armor market in 2021. This is due to the development of battlefield hazards like bone-breaking truncheons or fragmentation in improvised explosives, which has resulted in the adoption of cutting-edge tactical bulletproof vest covers and trailblazing body armor.

According to the body armor market forecast, the composite ceramic category is predicted to increase significantly in the industry in the coming years. Ceramic materials have a high hardness, a low density, a high percentage of elongation, and a strong overall strength, with adequate flexure. The Ceramic category is expanding due to the growing demand for ceramic materials employed in the production of armor materials.

According to product type, the soft armor segment is expected to increase rapidly in the market over the next few years. Soft body armor is used to defend the body from small semi-automatic rifles, dangerous knives, & low-velocity explosive threats. This segment will be driven by rising demand for security, civil, and other similar applications. Hard body armor is substantially heavier, less pleasant, and less flexible than soft body armor. It absorbs and mitigates a significant amount of energy, lowering the risk of harm. 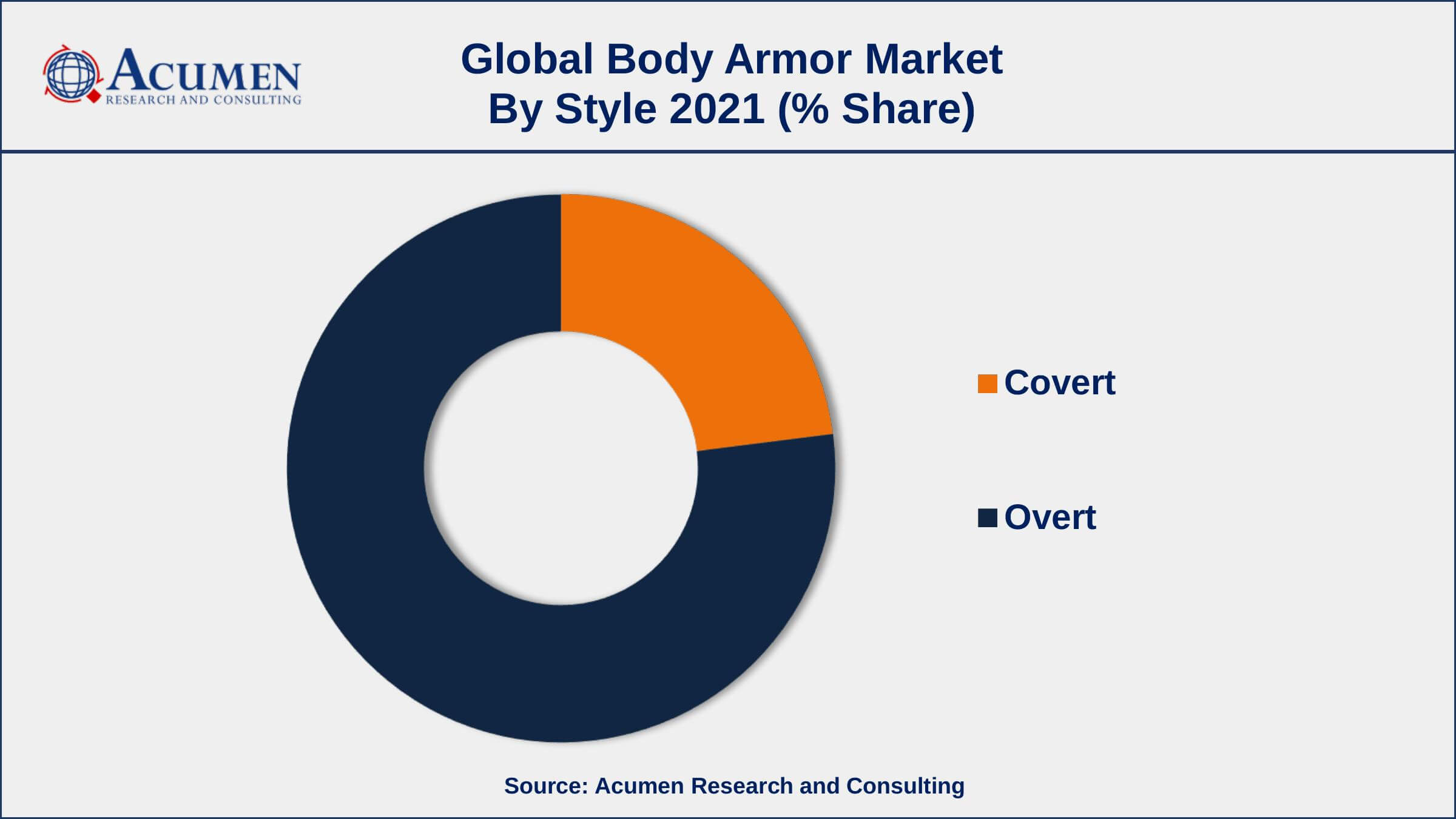 In terms of style, the overt segment leads the market in 2021. This is due to increased protection from huge spikes/blades and intense gunfire. Overt body armor is used over garments and is frequently heavier and larger due to the use of many Kevlar layers. Overt armor vests are comprised of more durable protective sheets and are favored by workers in high-risk occupations including combat activities, paramilitary police, as well as warzone journalism.

Geographically, the Asia-Pacific region is predicted to grow significantly in the market over the next few years. This expansion is due to increased military expenditure in the region. Several notable nations with sizable armies, including China, Japan, and India, are credited for spending a lot of money on military hardware. Increased occurrences of conflict and territorial disputes, as well as an increase in terrorism in the region, are projected to drive demand for body armor. The Asia-Pacific geopolitical environment has transformed the region into a center for unparalleled confrontations and military standoffs, particularly along the Indian border. The countries' enormous number of active-duty military personnel necessitates the use of suitable body armor to protect the personnel, but the abrasive wear of such gear generates cyclic demands.

What is the size of global body armor market in 2021?

The estimated value of global body armor market in 2021 was accounted to be USD 2,391 Million.

What is the CAGR of global body armor market during forecast period of 2022 to 2030?

Which region held the dominating position in the global body armor market?

Asia-Pacific held the dominating body armor during the analysis period of 2022 to 2030.

North America region exhibited fastest growing CAGR for body armor during the analysis period of 2022 to 2030.

What are the current trends and dynamics in the global body armor market?

By level segment, which sub-segment held the maximum share?

Based on level, level III segment is expected to hold the maximum share body armor market.