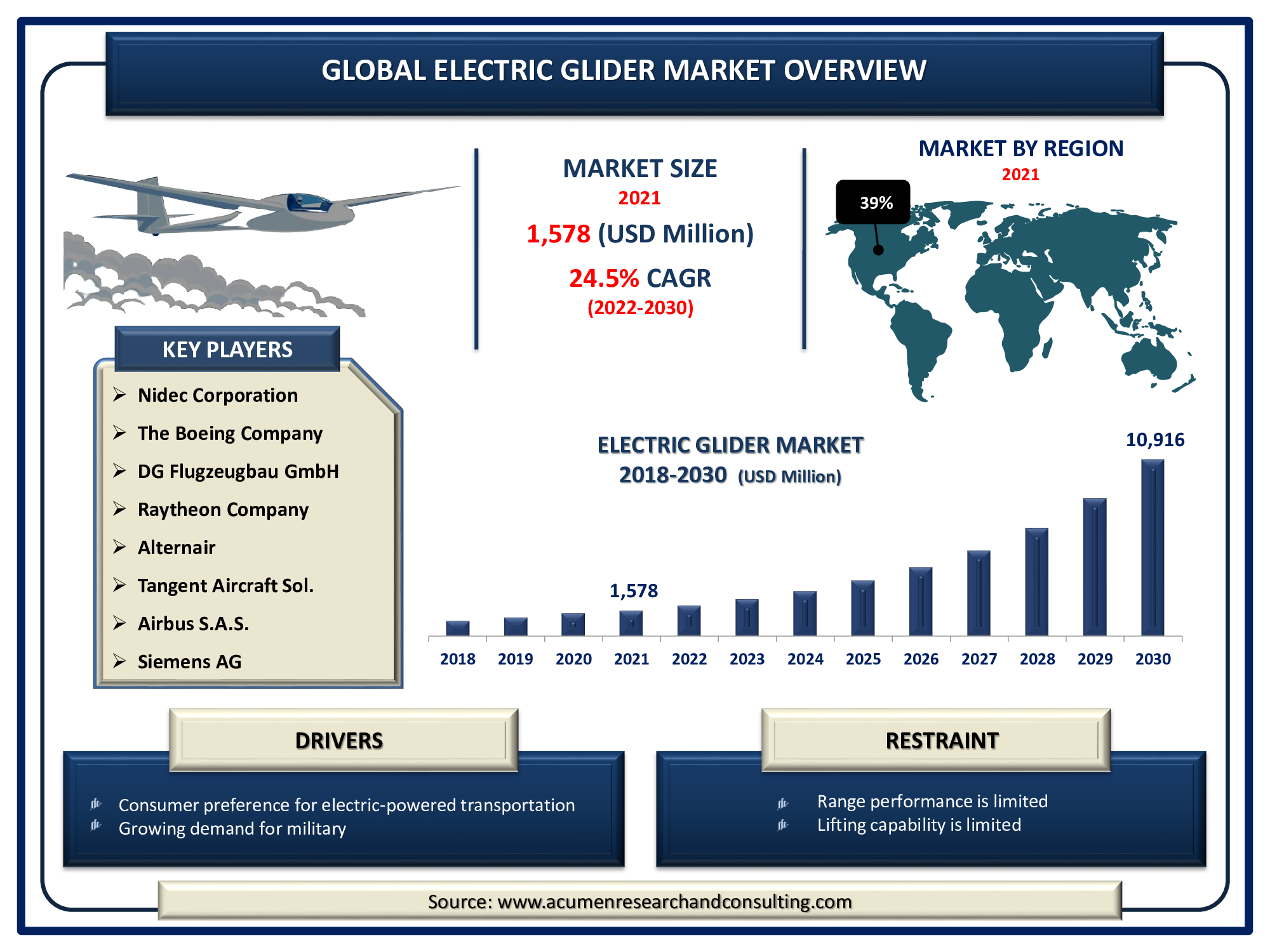 Gliding is growing more popular all around the world, which has expedited glider development. As technology and structural components have evolved, the new generation of thin and lightweight electric gliders has begun to replace classic wood and cloth motor gliders. Electric engines are becoming increasingly common, and the most crucial consideration is to be environmentally conscious. It also lowers operational costs. Furthermore, due to the increased leisure activities for convenience and rapid take-off, most electric-powered gliders are used on a daily basis. These are more dependable because they lack a filter, a pump, and a carburetor. Additionally, these gliders are vibration-free and may be used immediately. However, the growth in the pricing of conventional fuels, as well as the expanding need for lower-cost options due to the restricted availability of conventional energy sources, are the major factors in the electric glider market.

An electric glider is a glider powered by an electric motor. An electric glider can employ ultracapacitors, fuel cells, batteries, solar cells, and other power sources. Electric gliders are very innovative equipment in terms of engineering and operation. The remarkable increase in the prices of conventional energy sources, as well as their dwindling availability, is motivating industries to seek low-cost alternatives. Consumers are starting to shift to electric-based transportation to reduce emissions and fuel expenditure, which is predicted to increase due to long-term cost savings, which is also expected to fuel the advancement of the worldwide electric glider market revenue over the forecast period. Furthermore, important factors such as rising environmental awareness among the global population and increased government attempts to reduce emissions are fueling the expansion of the electric gliders market size.

The global electric glider market segmentation is based on the Source, Platform, End-use Industry, Type, and Region.

Based on the source, the batteries segment would be the fastest expanding segment in the market during the forecast year. The battery for gliders is constructed of two sorts of natural materials. The two types of materials are nickel-cadmium and lead-acid batteries. These are unique batteries that have a large energy storage capacity and come in a variety of sizes. Additionally, batteries have a long shelf life. As a result of these factors, the battery segment's demand will rise in the next years.

Based on the platform, the fixed-wing electric glider segment is likely to grow rapidly in the coming years. The dynamical contact of the air against the fixed-lifting wing's surfaces aids in the glider, and its free flight is mostly independent of an engine. a fixed-wing is typically employed in gliders that lack an engine, whereas electric motor-gliders have small engines that allow them to fly for longer periods of time by sustaining altitude. A fixed-wing electric glider improves air performance, reduces engine power consumption, and uses natural air force to fly the glider; these characteristics drive the market segment. 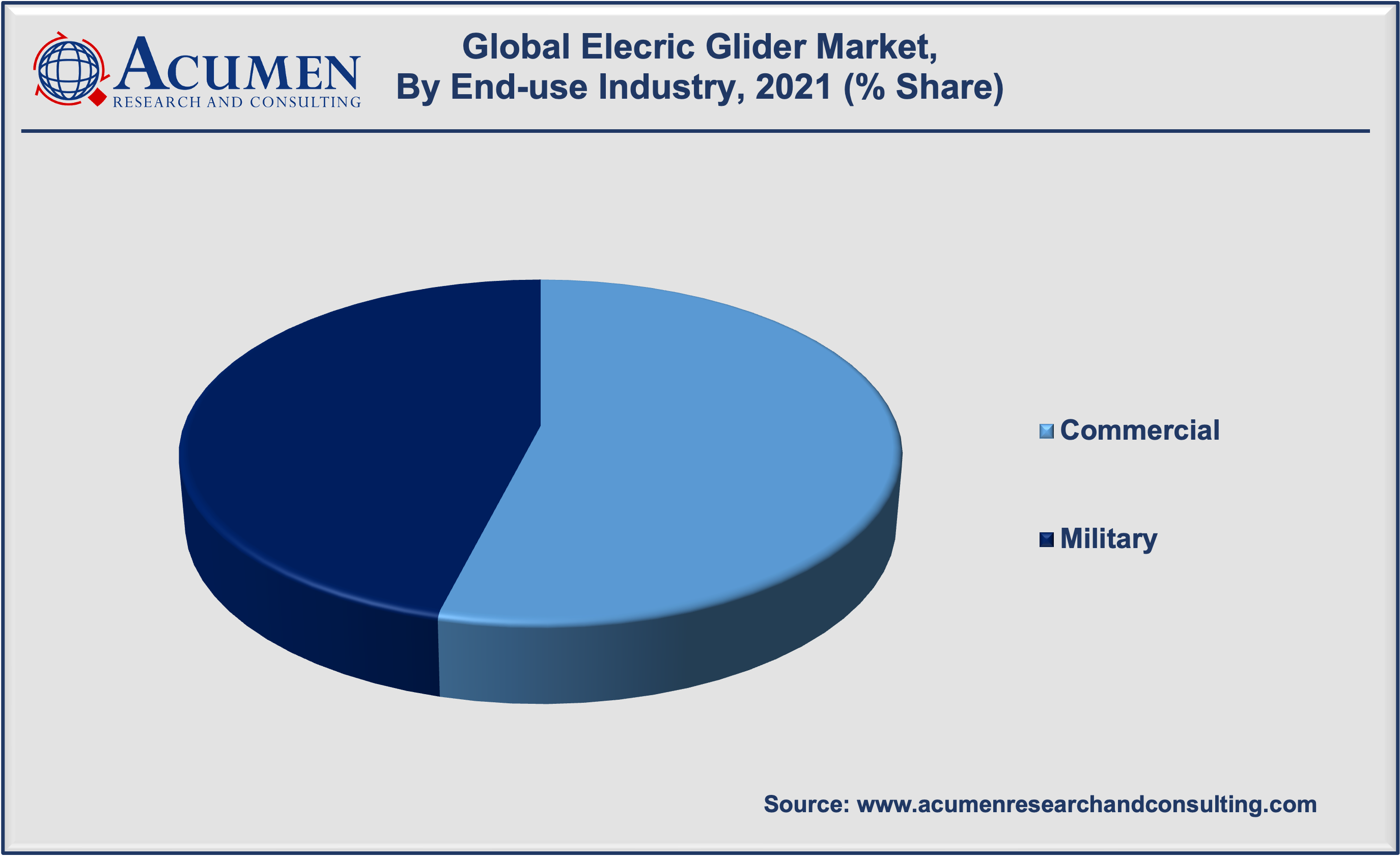 Based on the end-use sector, the military segment is predicted to gain significant market share over the next few years. In the military, gliders were employed by several government forces to transport goods and material handling equipment to battle zones, mostly during World War II. Gliders like these might be used to transport supplies after natural catastrophes or to remote locations where road access is difficult or impossible, all while reducing the flying time associated with conventional aircraft. Gliders, on the other hand, could land troops and ancillaries in more precise locations. Aside from that, electric gliders are utilized as communications systems for territorial locations when standard communication techniques fail. These features are increasing the military's interest in using electric gliders as important battlefield equipment, which drives the electric gliders market share.

In terms of type, the unmanned segment will account for the majority of its market share in 2021. Unmanned gliders are becoming increasingly popular in a wide range of applications due to their speedy and low-cost deployment. These can be utilized for both reconnaissance and communication platforms. When compared to a satellite communication platform, it has a simple system structure, high throughput, and low lag communication capacity. As a supplement to terrestrial infrastructure, it provides dependable wireless connections to ensure safe and dependable information transfer. As the demands of unmanned aerial applications for intelligence, autonomy, and multitasking have increased, the efficiency and intelligence level of unmanned aerial single-machine operations have increasingly failed to meet the task application standards.

North America will have the highest revenue share in 2021, because of rising concern for the environment and increased military interventions, which are moving the electric aircraft market forward. Furthermore, due to the presence of large enterprises in the region, North America is expected to be a prominent market for electric gliders worldwide. Aside from that, Asia-Pacific is expected to increase significantly during the predicted period. Because of increased research and innovation in the air transport industry to combat air pollution, electricity is becoming a more essential source of energy in the aviation sector as green technology develops.

How big was the market size of global electric glider market in 2021?

What will be the projected CAGR for global electric glider market during forecast period of 2022 to 2030?

Which region held the dominating position in the global electric glider market?

What are the current trends and dynamics in the global electric glider market?

Consumer preference for electric-powered transportation, growing demand from the military, and the tremendous growth in prices of conventional energy sources are the prominent factors that fuel the growth of global electric glider market

Based on source, battery segment held the maximum share for electric glider market in 2021