Battery swapping technology is a method in which a user can swap a battery to keep the vehicle running. Electric vehicles are becoming increasingly popular in today's world, particularly with the growing use case in the commercial vehicle space. Many industry manufacturers and technology providers are working on strategies to make electric vehicles more cost-effective, easy to charge, and cost-effective to operate. Battery swapping is one such technology that provides all of these opportunities to fleet operators. 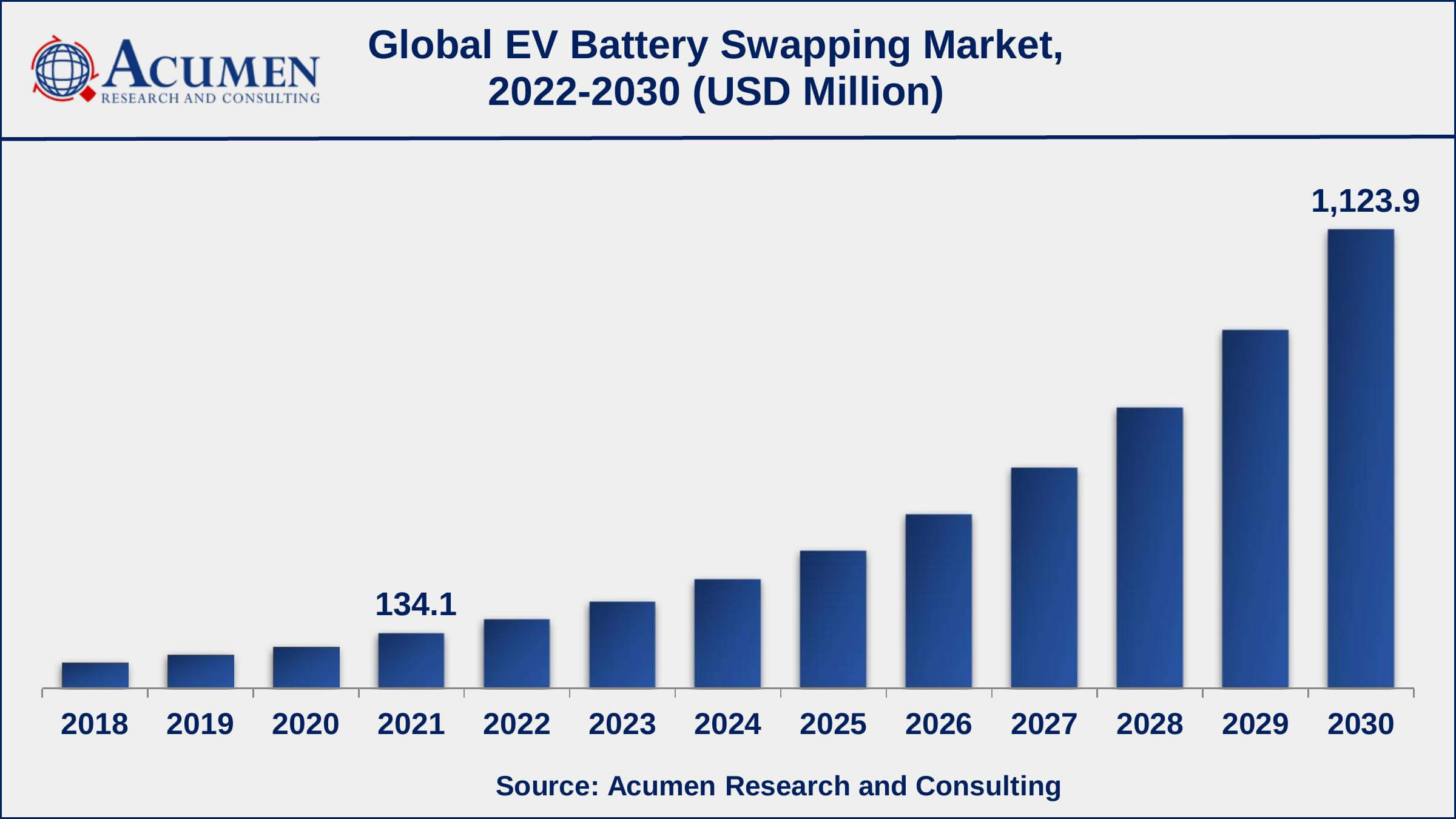 The increasing number of electric two-wheelers and three-wheelers such as e-bikes and e-cargo bikes is increasing the popularity of the global EV battery-swapping market. Battery swapping is commonly used for smaller vehicles, such as two- and three-wheelers because their batteries are smaller and easier to swap than in other automotive classifications where the same can be implemented mechanically. There is a significant rise of two-and three-wheelers in Asian countries such as China, India, Thailand, and the Philippines among others expected to fuel the demand of the EV battery swapping market.

The slow development of electric charging infrastructure, particularly in developing countries, as well as the need for large amounts of capital, may increase the importance of the battery swapping industry. When compared to EV battery charging infrastructure, EV battery swapping infrastructure not only requires less capital to build but also saves time and resources. The charging time is an important consideration in the adoption of electric vehicles, especially in long-distance applications. The vast majority of EVs worldwide use a sluggish charge system to replenish the battery all night that consumes as long as 8 hours. The swapping process considerably reduces battery charging time to less than three minutes, increasing the EV's operational duration.

However, the market's ability to grow is being hampered by the uniqueness of battery design and technology. Furthermore, even though the capital required for battery swapping infrastructure is less than that required for battery charging infrastructure, it is still significant. This factor is also expected to limit the market's growth. However, in the coming years, the trend will shift, and the number of electric vehicles, as well as investments in EV battery swapping, will increase, boosting the market growth.

The global EV battery swapping market is segmented based on service type, vehicle type, and geography. 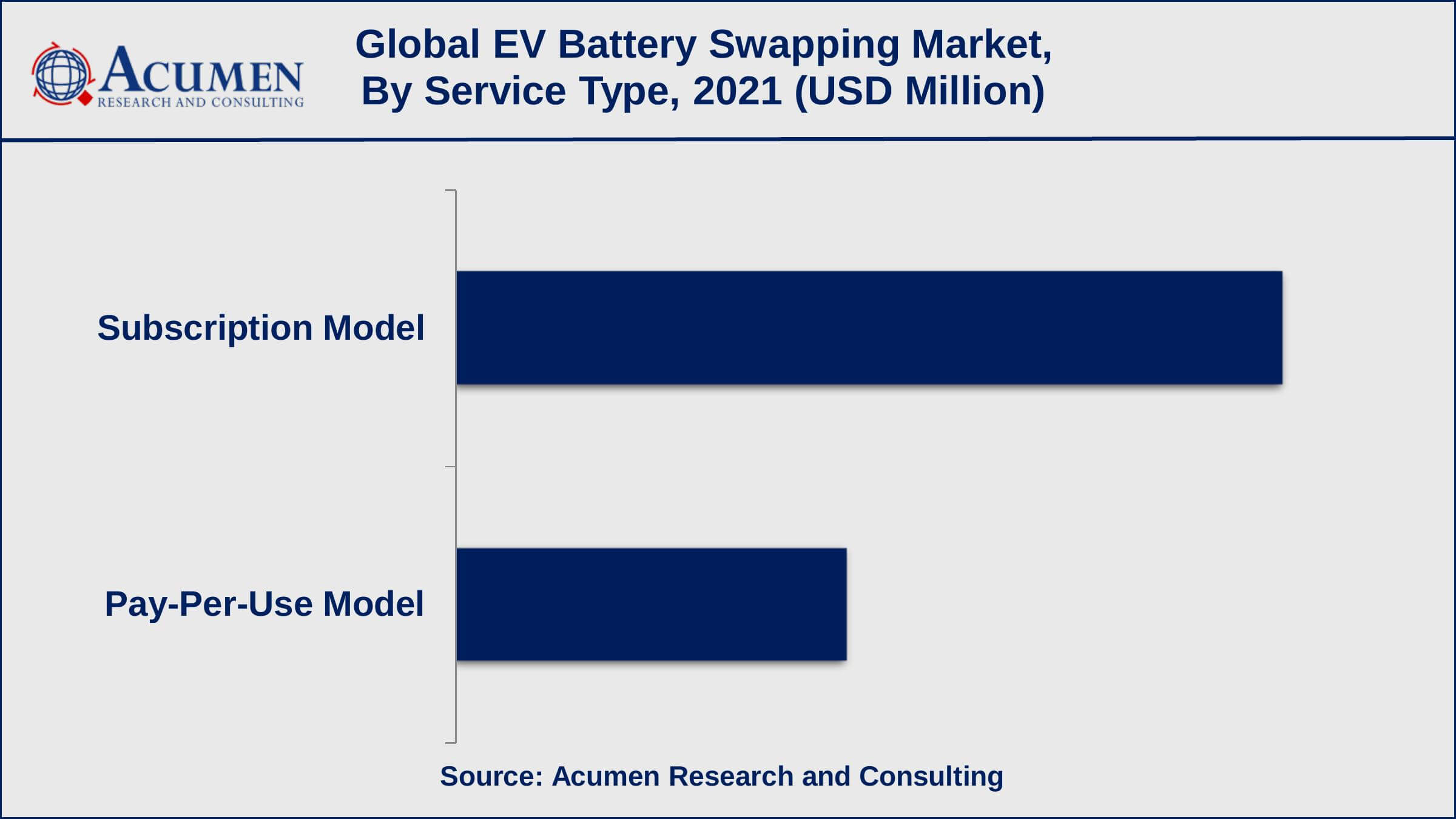 Based on our EV battery swapping industry analysis, the subscription model service type accounted for a significant market share in 2021 due to the driver’s choice to pay according to their usage. In addition, the subscription model service is also gaining popularity in the companies' and manufacturers' low prices throughout the projected timeframe from 2022 to 2030. On the other hand, the pay-per-use design has formed the next sector where the market expects a higher demand during the forecast period. This design is preferred by private vehicle users over the previous one.

In terms of revenue, two-wheeler will continue to be the most profitable industry for the EV battery-swapping industry as they typically travel more than 100 kilometers per day. Therefore, they must be charged twice or three times a day. The best alternative to slow charging is the battery swapping technology, which allows drivers to make the most of their operational hours. However, the three-wheelers vehicle type is expected to gain significant impetus during the forecast timeframe from 2022 to 2030. The rapid increase of three-wheelers in countries such as China and India with new local brands will upsurge the demand for this segment. 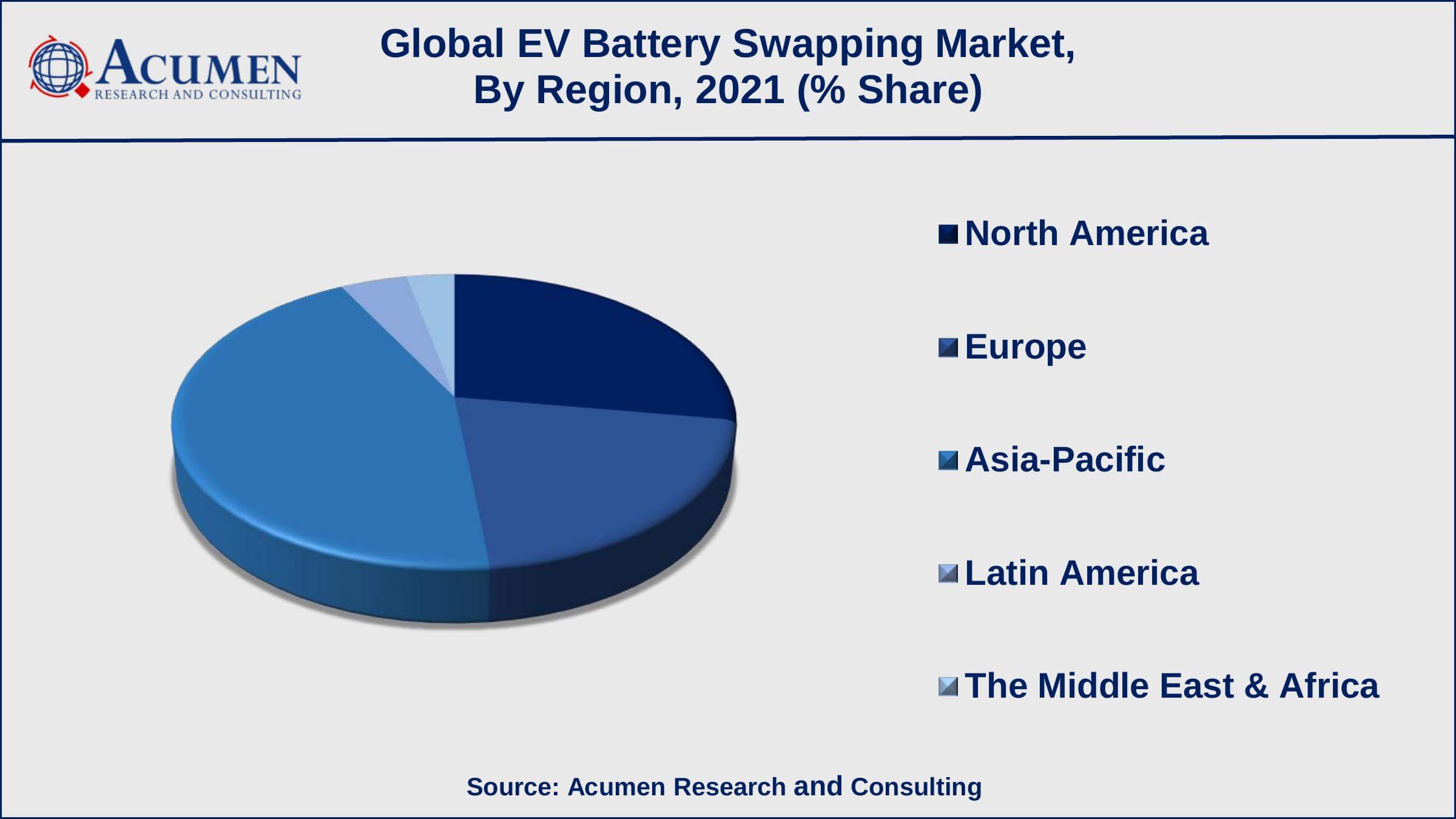 The Asia-Pacific region will have a significant market share in 2021 and will continue to do so in the coming years. The rapidly selling two and three-wheelers in APAC countries are the primary factor that will boost the market share. The growing middle-class population that prefers two-wheelers as their primary mode of transportation will support the APAC EV battery-swapping market. Furthermore, these countries' growing youth populations are focusing on the two-wheeler segment, which is also supplementing the Asia-Pacific industry.

Europe, on the other hand, is expected to grow at a significant rate between 2022 and 2030. The European EV battery swapping market will benefit from strict carbon emission regulations and rising demand for e-cargo bikes in countries such as Germany, France, and the United Kingdom.

What is the size of global EV battery swapping market in 2021?

The market size of EV battery swapping market in 2021 was accounted to be USD 134.1 Million.

What is the CAGR of global EV battery swapping market during forecast period of 2022 to 2030?

Which region held the dominating position in the global EV Battery Swapping market?

Asia-Pacific held the dominating EV battery swapping during the analysis period of 2022 to 2030.

Europe region exhibited fastest growing CAGR for EV battery swapping during the analysis period of 2022 to 2030.

What are the current trends and dynamics in the global EV battery swapping market?

Based on vehicle type, two-wheeler segment is expected to hold the maximum share of the EV battery swapping market.