The Global eVTOL Market Size accounted for USD 6,937 Million in 2021 and is estimated to achieve a market size of USD 30,519 Million by 2030 growing at a CAGR of 18.3% from 2022 to 2030. This eVTOL market growth can be connected to the expanding need for quieter, cleaner aircraft. Furthermore, advancements in electric motors, batteries, and power electronics, as well as a rise in the demand for unmanned aerial vehicles, will also drive the eVTOL market value in the coming years. 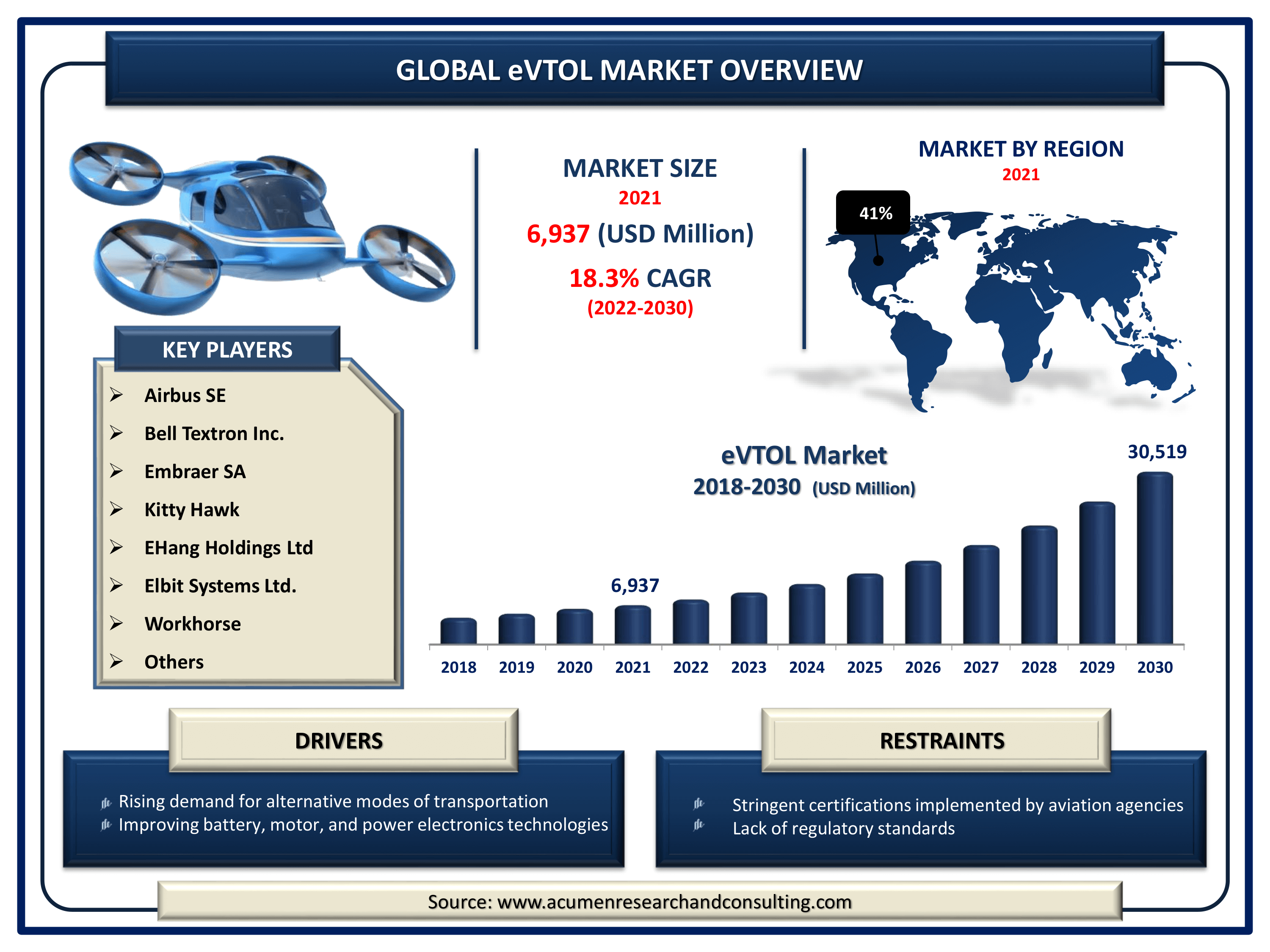 Electric vertical take-off and landing (eVTOL) is a relatively recent innovation in the aviation industry. eVTOL vehicles can land and take off in small areas, are carbon-neutral, less expensive/quieter to run than choppers, and speedier than vehicles. As a result, they are highly adapted for urban air transportation to deal with increasing traffic congestion while focusing on sustainability. In the scenario of a natural disaster, eVTOLs offer the safest and most effective mode of transportation. This can range from evacuating and transferring storm or earthquake relief to evacuating volcanoes. Another application is rescuing and searching in regions where ground vehicles cannot operate, such as forests, rivers, and mountains.

The growing need for eVTOL vehicles for security, satellite imaging, naval reconnaissance, cargo handling in industrial applications, as well as a method of transportation for delivering the product is driving the market growth. The increased necessity of locating victims following natural disasters such as hurricanes and earthquakes and giving them food packs, as well as the strong need for more environmentally friendly aircraft, are boosting market demand. Moreover, increasing road traffic congestion has increased the demand for alternate modes of transportation, which might produce significant revenue for the worldwide eVTOL market. Recent advancements in the realms of aeronautical and photography applications, as well as rising utilization for anti-terrorist and complete surveillance objectives, are fueling market expansion during the projection period.

However, the complexity of design, inadequate vertiport facility infrastructure, and noncompliance with relevant regulations are a few of the growth constraints that affect the eVTOL market trend.

The worldwide eVTOL market segmentation is based on the technology, propulsion type, mode of operation, payload, range, application, and geography.

In terms of technology, the vectored thrust segment is predicted to expand at the fastest pace in the market over the next few years. This technology's characteristics, such as high endurance and greater efficiency, are expected to drive segment expansion. Furthermore, this thrust vectoring offers two major advantages: VTOL and enhanced maneuverability. They also allow for lower approach speeds and faster derotation, as well as faster revolution and lower take-off speeds. 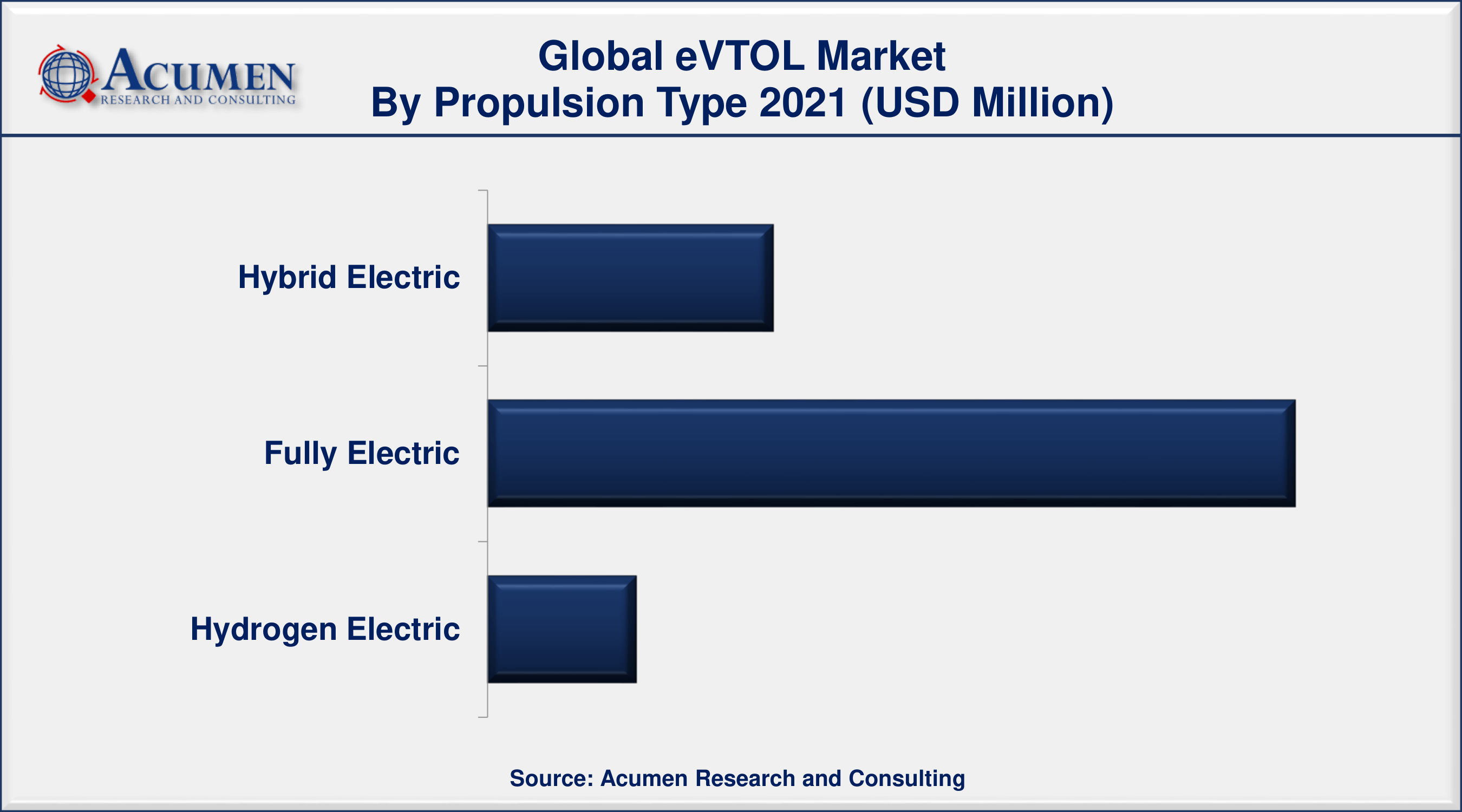 According to the eVTOL market analysis, the fully electric segment accounted for the largest market shares in 2021. An advantage of fully electric aircraft for pilots training and air traffic controllers is the cheaper option of electrical power in comparison to aviation petroleum. In comparison to internal combustion engines, sound and emission standards are also reduced in these propulsion types. Electrically powered motors would not only eliminate immediate greenhouse gas emissions, but they'd also reduce fuel costs by up to 90%, maintenance expenses by up to 50%, and vibration by nearly 70%.

eVTOL Market By Mode of Operation

Based on the method of operation, the autonomous segment is expected to rise significantly in the market over the next few years. The rising acceptance of artificial intelligence (AI), virtual reality (VR), and the Internet of Things (IoT) in eVTOL technology is mainly responsible for this growth. Furthermore, autonomous vehicles provide fewer accidents, less traffic congestion, lower emissions, increased lane capacity, as well as lower energy consumption.

According to the most recent eVTOL market forecast, the 500-1,500 kg segment is expected to develop at the fastest rate in the market over the next few years. This segment's expansion is mostly attributable to increased applications in the defense and military sectors. Furthermore, the increased use of intercity passenger and freight transportation is boosting segment expansion.

In terms of range, the 0 to 200 km sector will grab significant market shares between 2022 and 2030. The segment's growth is being driven by the increased acceptance of sort range UAVs for delivery purposes, as well as expanding application sectors like medical and food distribution. Furthermore, this aircraft can be used for last-mile delivery, air ambulances, and private transportation, to name a few applications. 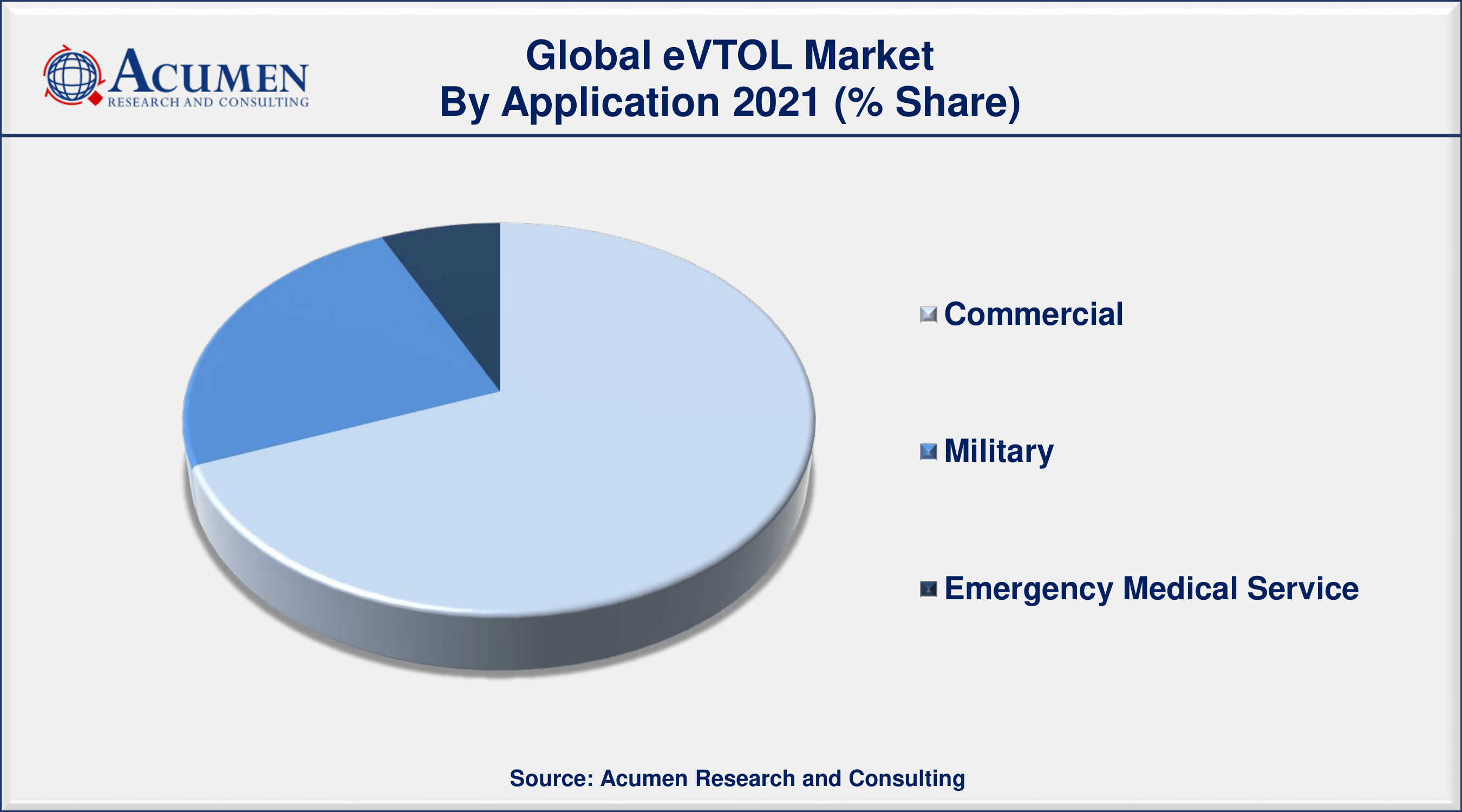 According to the eVTOL industry analysis, the commercial segment is expected to lead the market in 2021. The increasing advancement of drone deliveries and air taxi services is projected to propel market expansion. Interest in autonomous last-mile delivery is growing as autonomous vehicles are increasingly used for delivering products without human involvement. Shorter travel durations result in fewer points of contact, and faster transport times between UPS sites contribute to segment growth.

According To The FAA, About 900,000 Mini-UAVs Are Presently Registered In The US

In terms of geography, North America will dominate the global market in 2021. The significant growth of the North America eVTOL market is largely driven by significant aspects such as significant investments by market participants and the deployment of innovative technology towards autonomous aerial solutions. Furthermore, the government's enormous backing for eVTOL aircraft manufacture is projected to boost the desire for eVTOL vehicles in the region. Moreover, increasing government activities and investments across the region are expected to stimulate demand for eVTOL vehicles in North America during the period of analysis.

What is the size of global eVTOL market in 2021?

The estimated value of global eVTOL market in 2021 was accounted to be USD 6,937 Million.

What is the CAGR of global eVTOL market during forecast period of 2022 to 2030?

Which region held the dominating position in the global eVTOL market?

North America held the dominating eVTOL during the analysis period of 2022 to 2030.

Asia-Pacific region exhibited fastest growing CAGR for eVTOL during the analysis period of 2022 to 2030.

What are the current trends and dynamics in the global eVTOL market?

By propulsion type segment, which sub-segment held the maximum share?

Based on propulsion type, fully electric segment is expected to hold the maximum share eVTOL market.